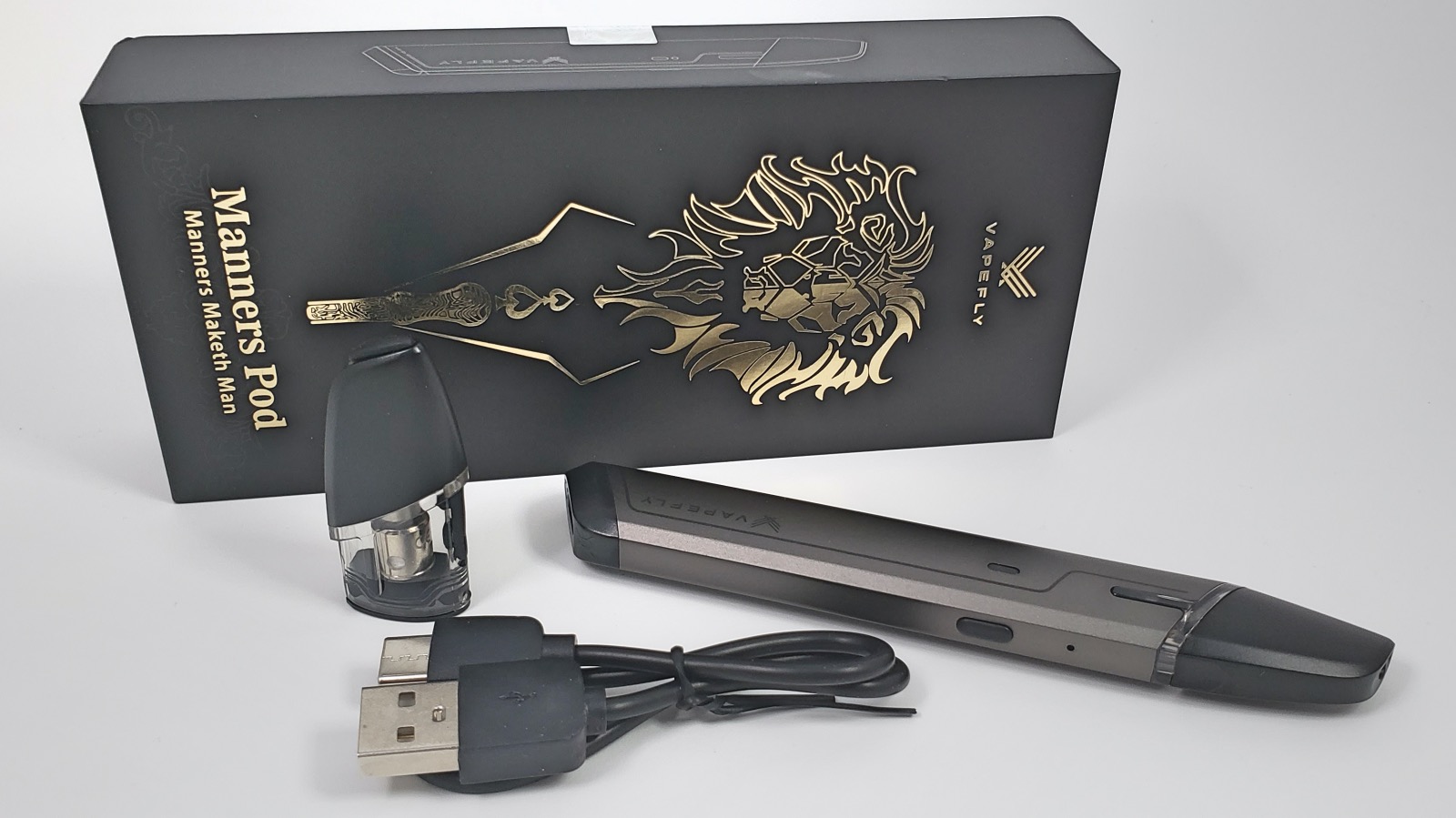 The Vapefly Manners was sent to me for review from Vapefly. This is a little pod device that Vapefly has designed to compete directly with the Uwell Caliburn and the Vaporesso Xros. So let’s see how it stacks up. 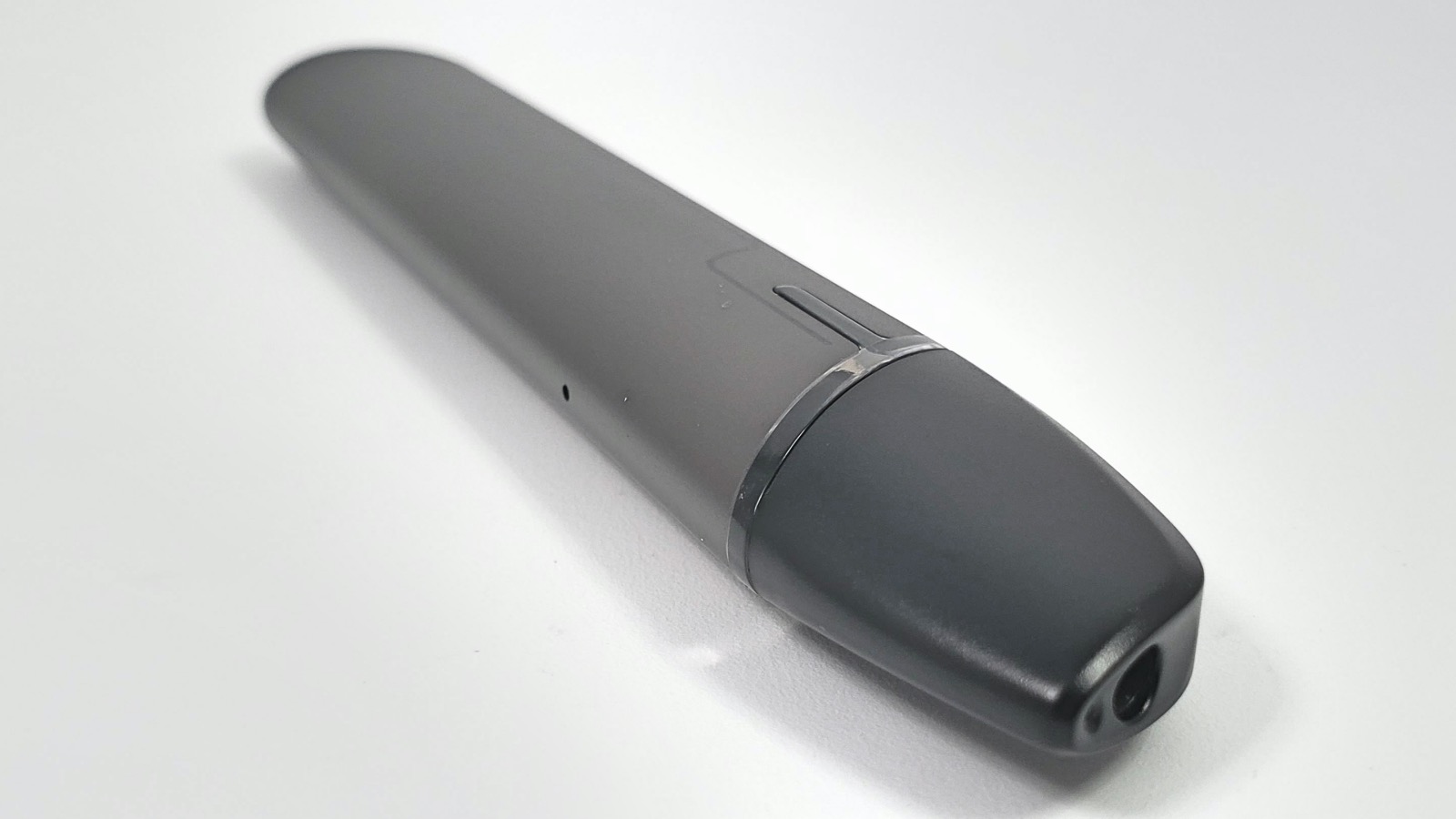 Vapefly went with an interesting theme for this one. Their slogan is “Manners Maketh Man” and a lot of the marketing materials talk about this being business professional, elegant, classy, and designed for gentlemen.

I don’t know a whole lot about machining but just some quick search on Google shows that five axis cutting means that they are using a machine that can go on five axes as opposed to three axes in basic machining. I don’t know if that’s any different than how any other devices in the vape industry are machined but I guess it’s good that they’re using the best machining techniques.

As far as I know, anodic oxidation seems to be a method of producing an oxide film on metal. I won’t go into all the technical details but it seems to increase a metal’s resistance to corrosion and wear.

This device can be fired either using draw activation by taking a hit or manual activation by pressing the firing button. I’ve seen this on other new devices coming out and I think it’s actually a really cool idea. Some people like to take a hit by drawing from the device and some people prefer pushing a button. And I actually prefer the button so I’m glad they included both.

On the Manners device, I tend to get misfires in auto draw mode because I just don’t hit it hard enough. I wouldn’t say that’s a problem limited to only this device though. I get it with a lot of draw-activated devices. But with the button fire, it’s a nice strong hit every time. 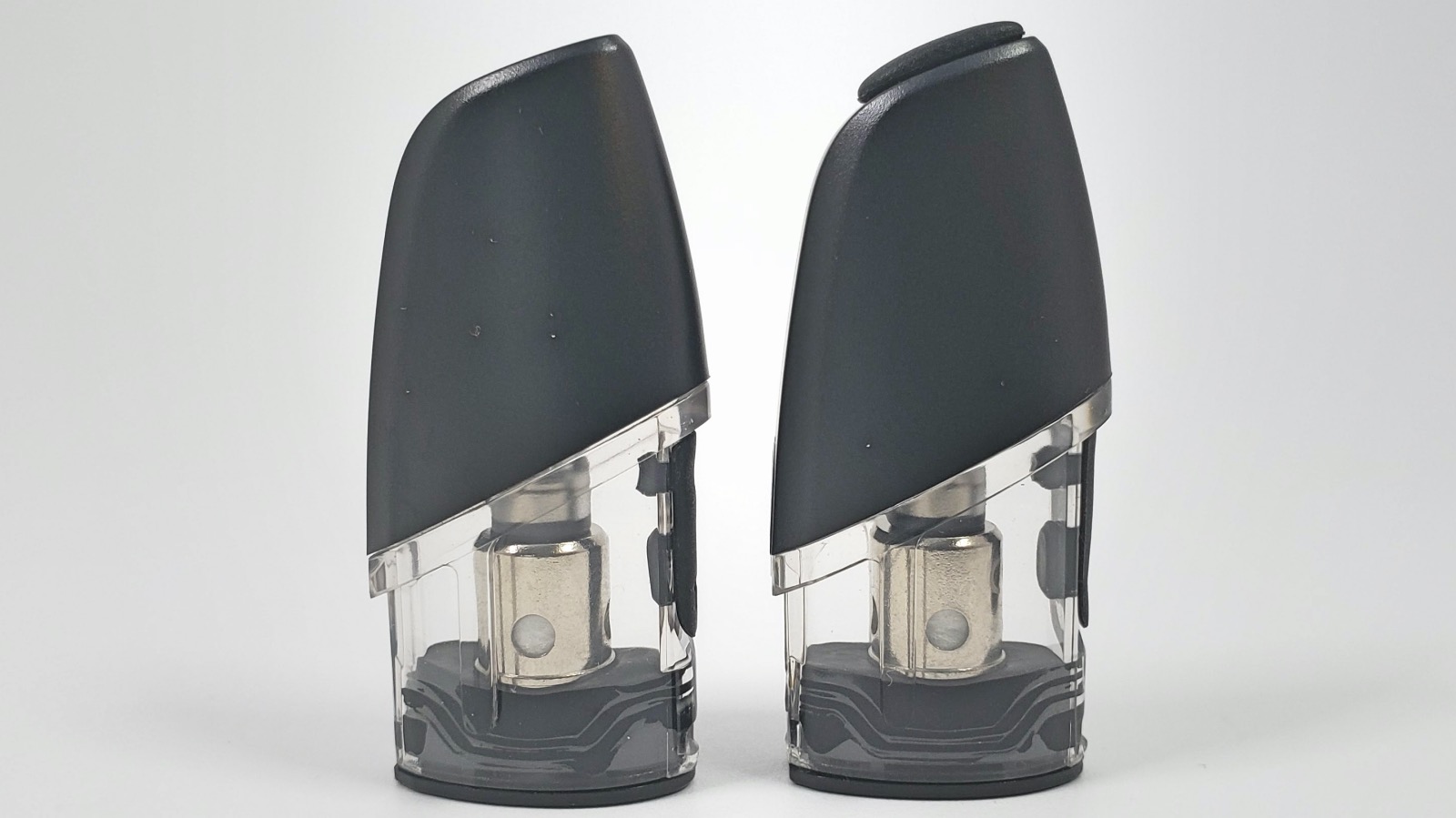 The pods are single pieces with the coils built-in, so you can’t remove the coils from the pod. These pods hold a max of 2ml of liquid, which I think is typical. 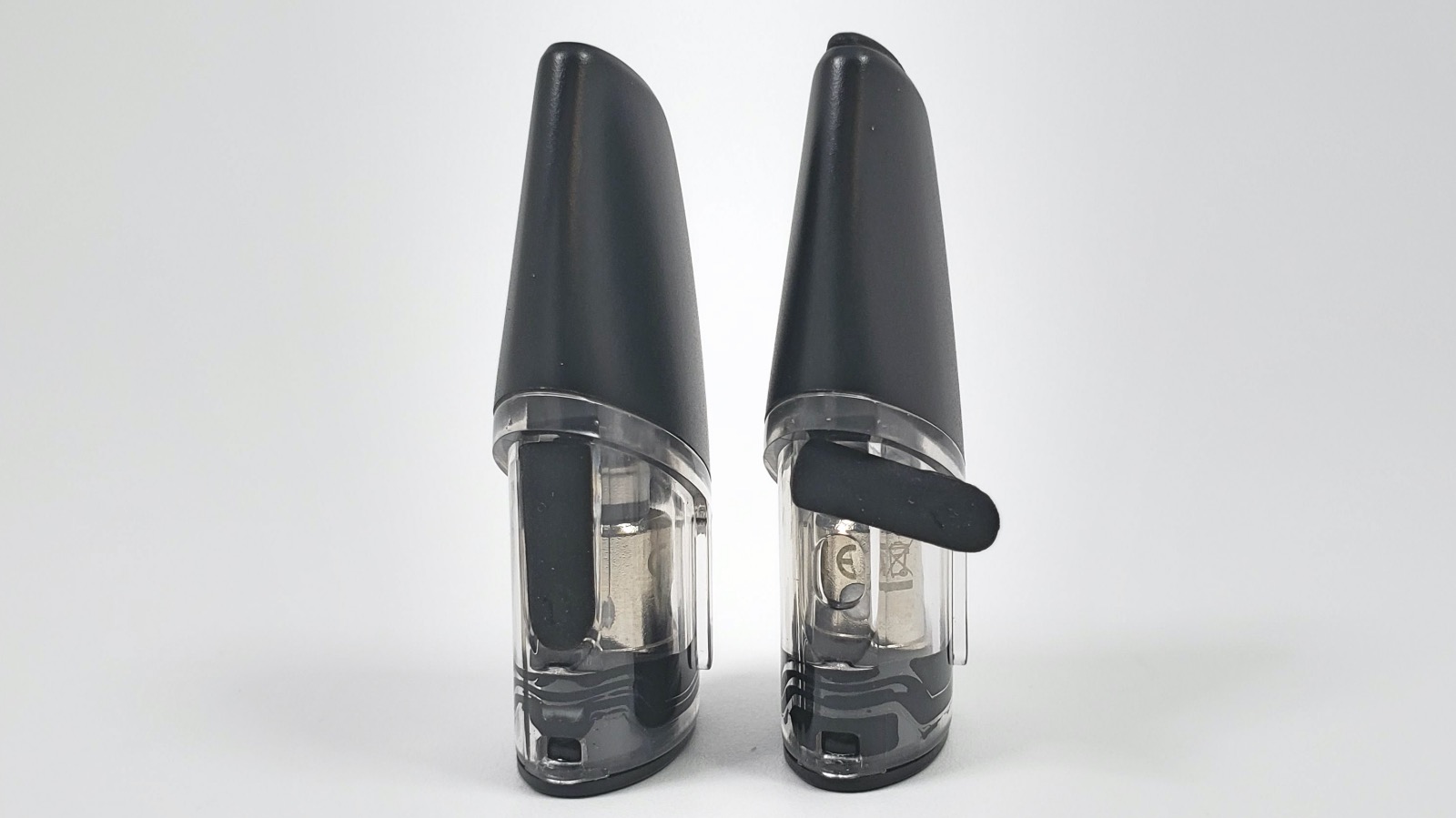 To fill the pod, open up the silicone plug on the side and fill it up. 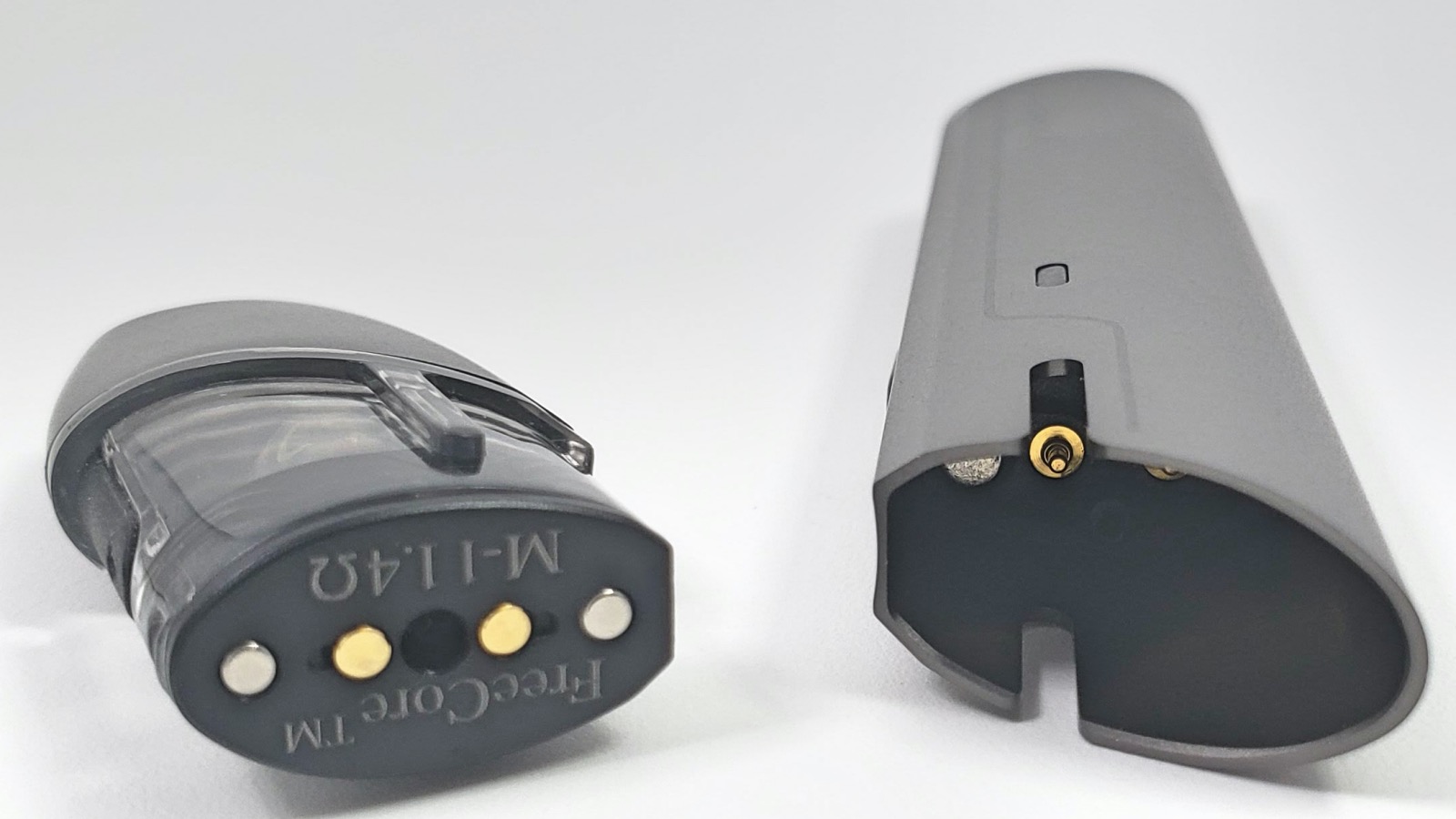 To insert the pod simply drop it into the device and it’ll click into place. What’s also nice is that the Manners device has a liquid window on both sides of the body so that you can see how much liquid is in the pod. 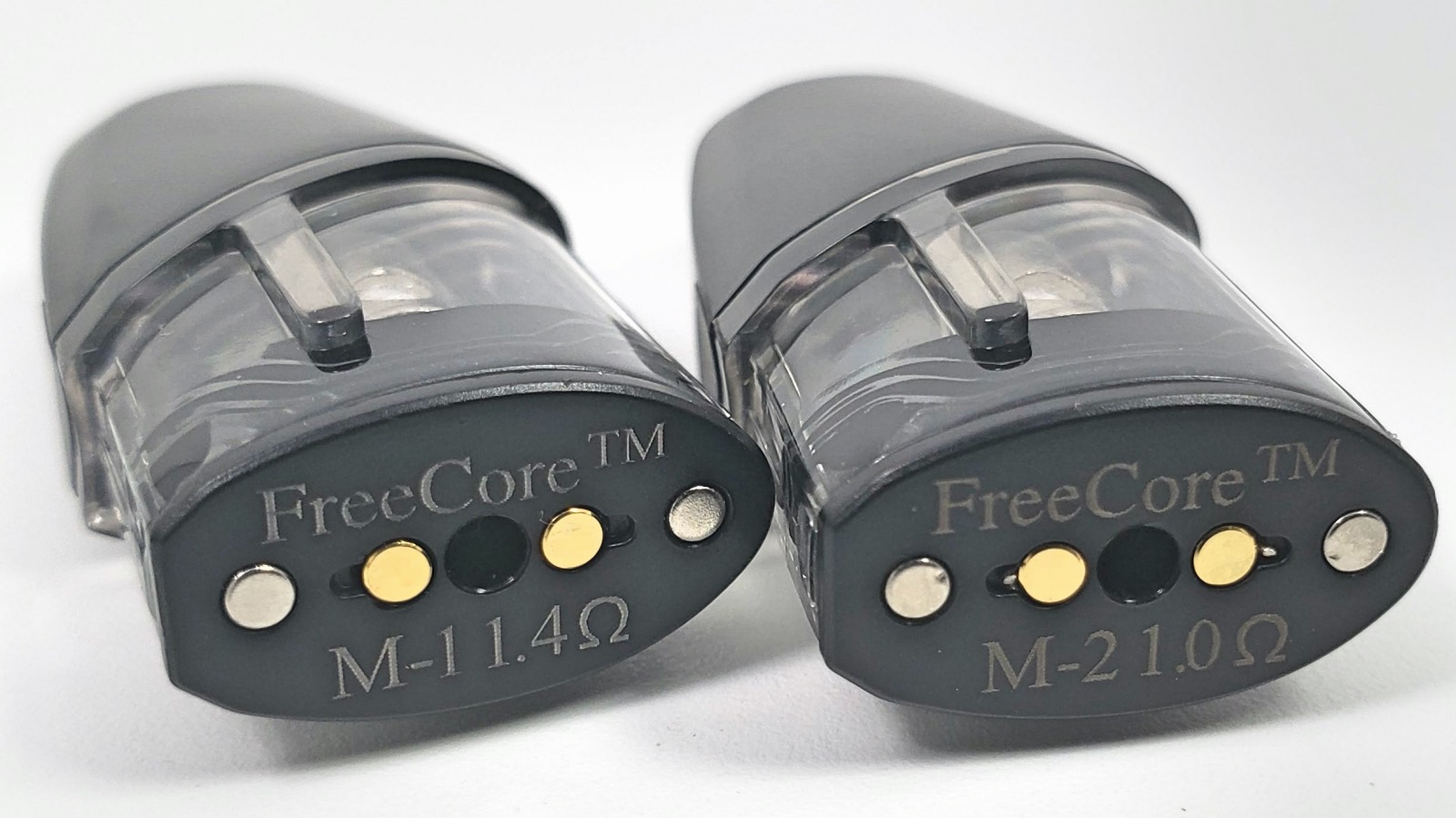 The coils are mesh coils that use imported organic cotton from Japan. They also say that the coils use a sixth-generation honeycomb structure. So supposedly this should give you better flavor and a smoother hit.

There are two cartridges that come in the box, each with a different coil installed:

The draw is a nice mouth to lung hit. I would have liked it to be just a little more restricted but it’s actually pretty good as it is. The flavor I get is pretty good too.

The draw on this pod is the same as the 1.4 Ohm coil. The flavor from this coil is just as good too. It has really good flavor.

The airflow gives you a nice restricted draw. It’s not as tight as I usually like with pod devices but it’s pretty close. I think it’s pretty good. 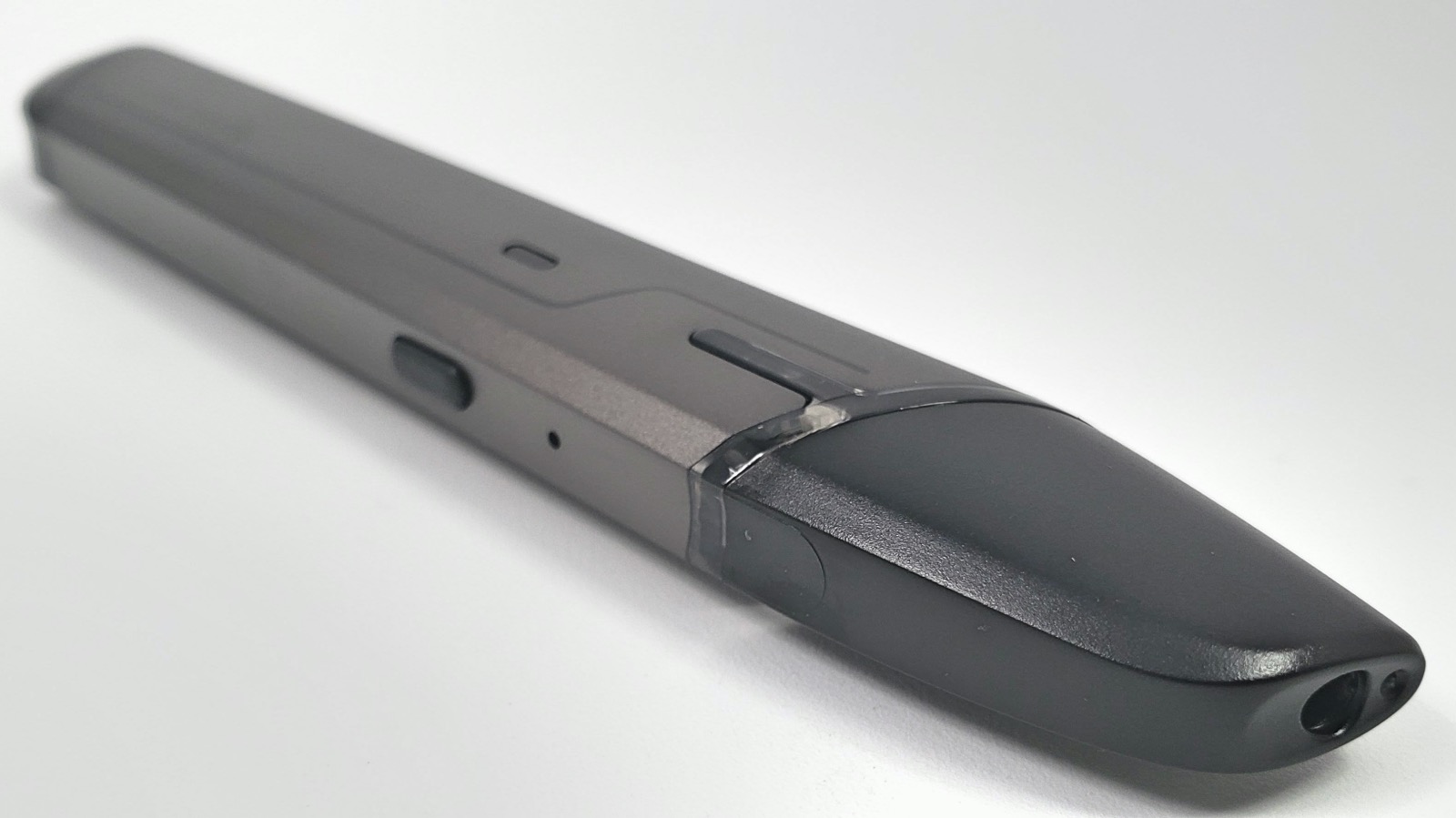 The mouthpiece has a slightly tapered end to it. It also has an inclined design on one side of it, which they say is proven to be more ergonomic and elegant.

So one interesting thing with this mouthpiece is that because of the incline, it’s more comfortable to vape from the side of your mouth rather than from the front. They mention this in their marketing materials too and it’s funny because they say that you shouldn’t vape it with the front of your mouth but to instead vape from the side like a gentleman. I personally think it’s a bit of a drawback because I do like to vape with the front of my mouth and it’s hard to get a good hit that way. But from the side, it hits perfectly. 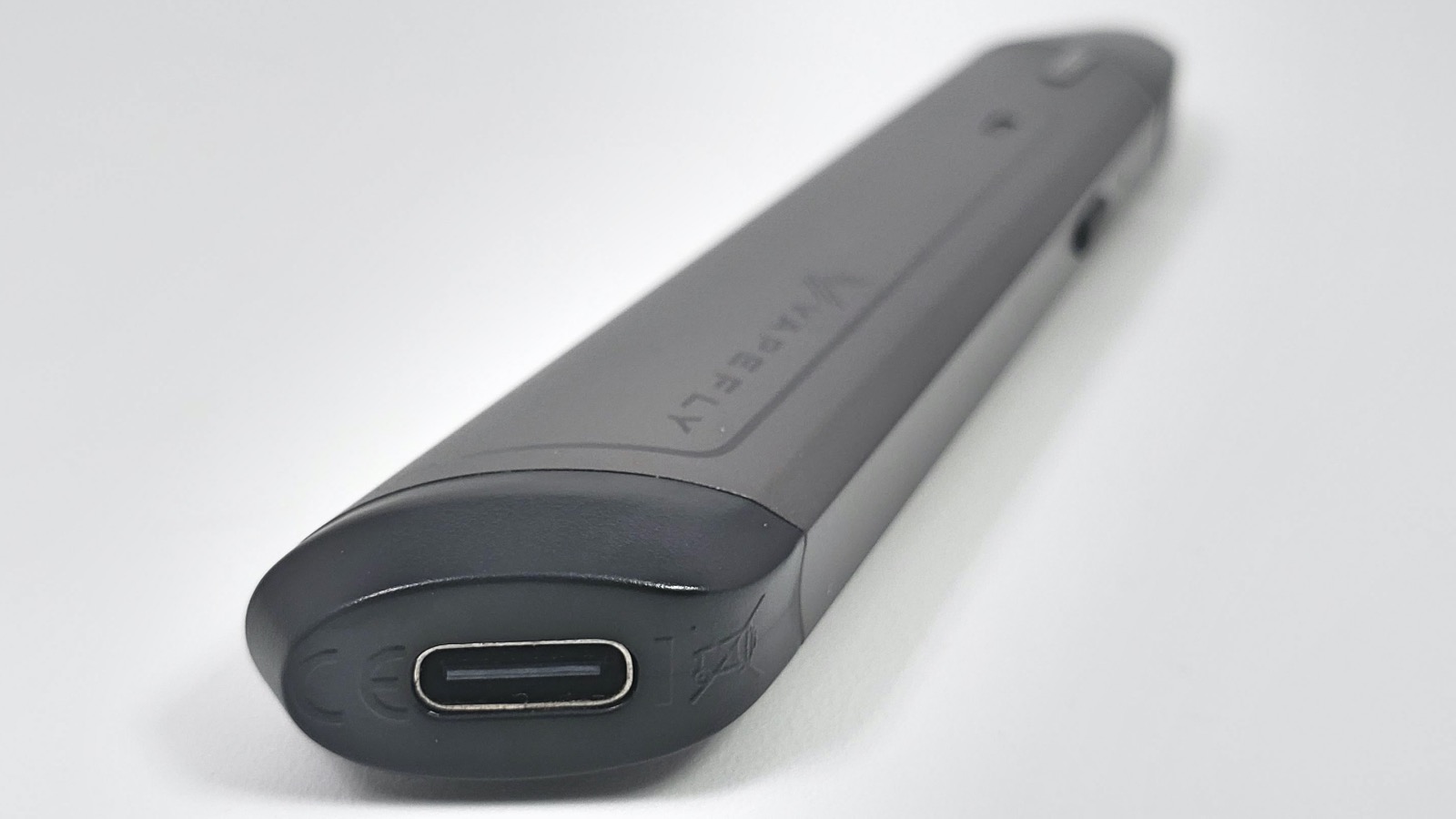 There are three different LED colors that show the battery levels

The Manners has an internal 650 mAh battery which charges using a USB-C cable. For a device this small I think that battery is pretty big so I’m happy with that. And because they’re using a type-C USB cable, the device can charge fast in only 40 minutes. 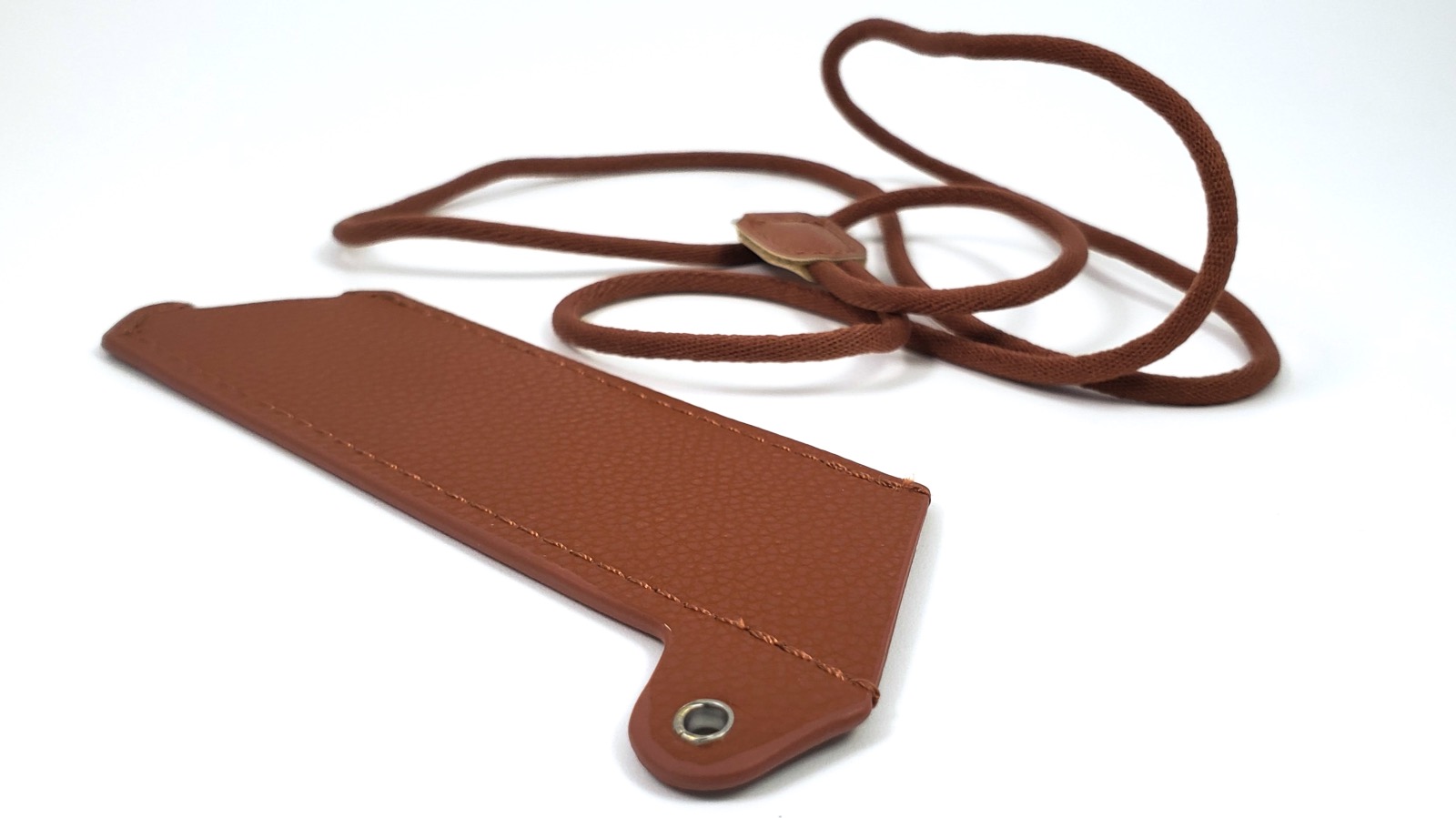 Something you can buy separately for the Manners device is a leather case. There are three colors of the leather case and each one comes with a lanyard to match. The lanyard string isn’t leather but more like a cotton string. I would have liked for the string to be leather too. 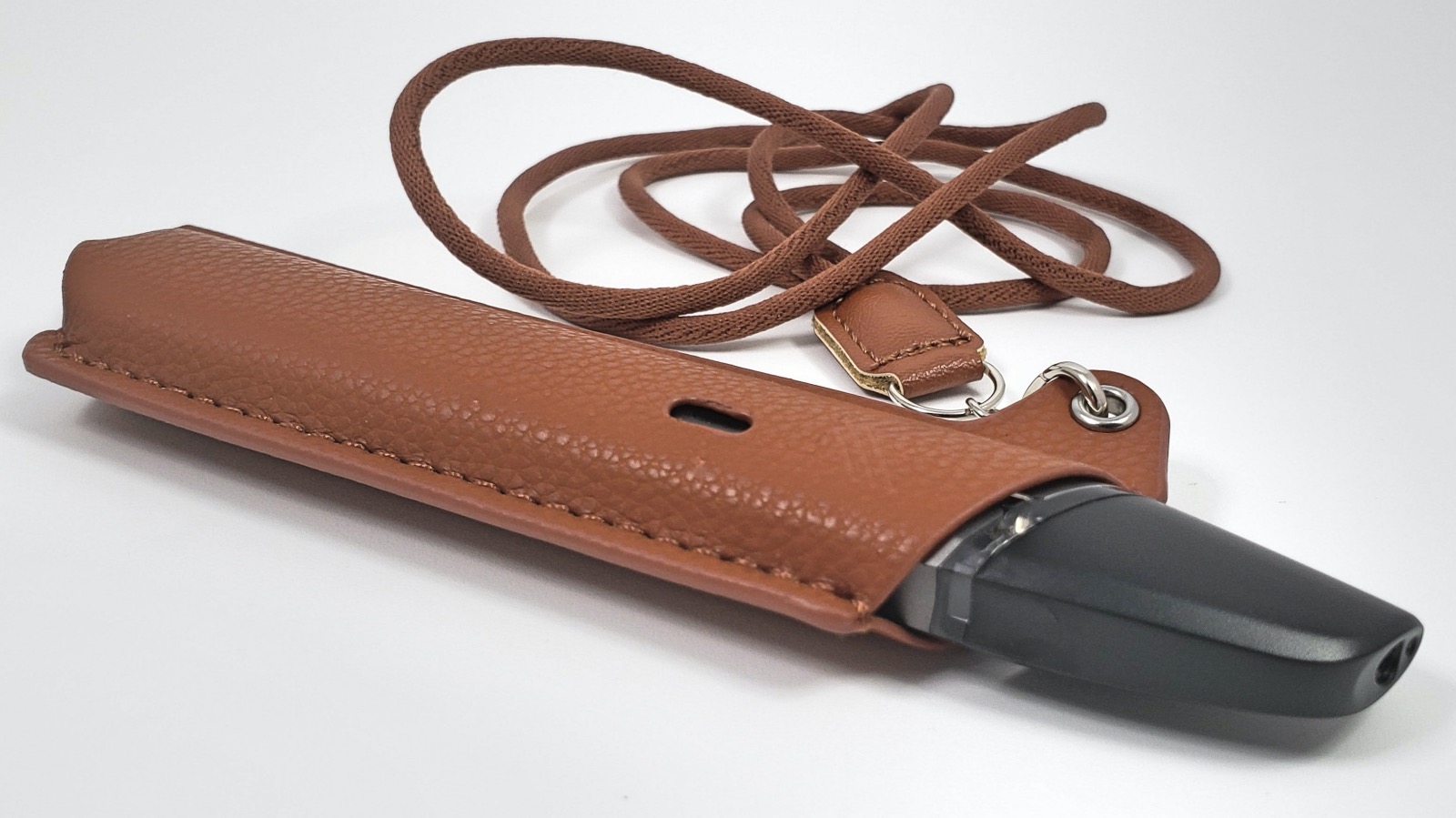 I normally wouldn’t carry around a device in a case with a lanyard but this little cover s actually pretty nice. And I think it being leather really fits with the theme of classiness that Vapefly is going for here. 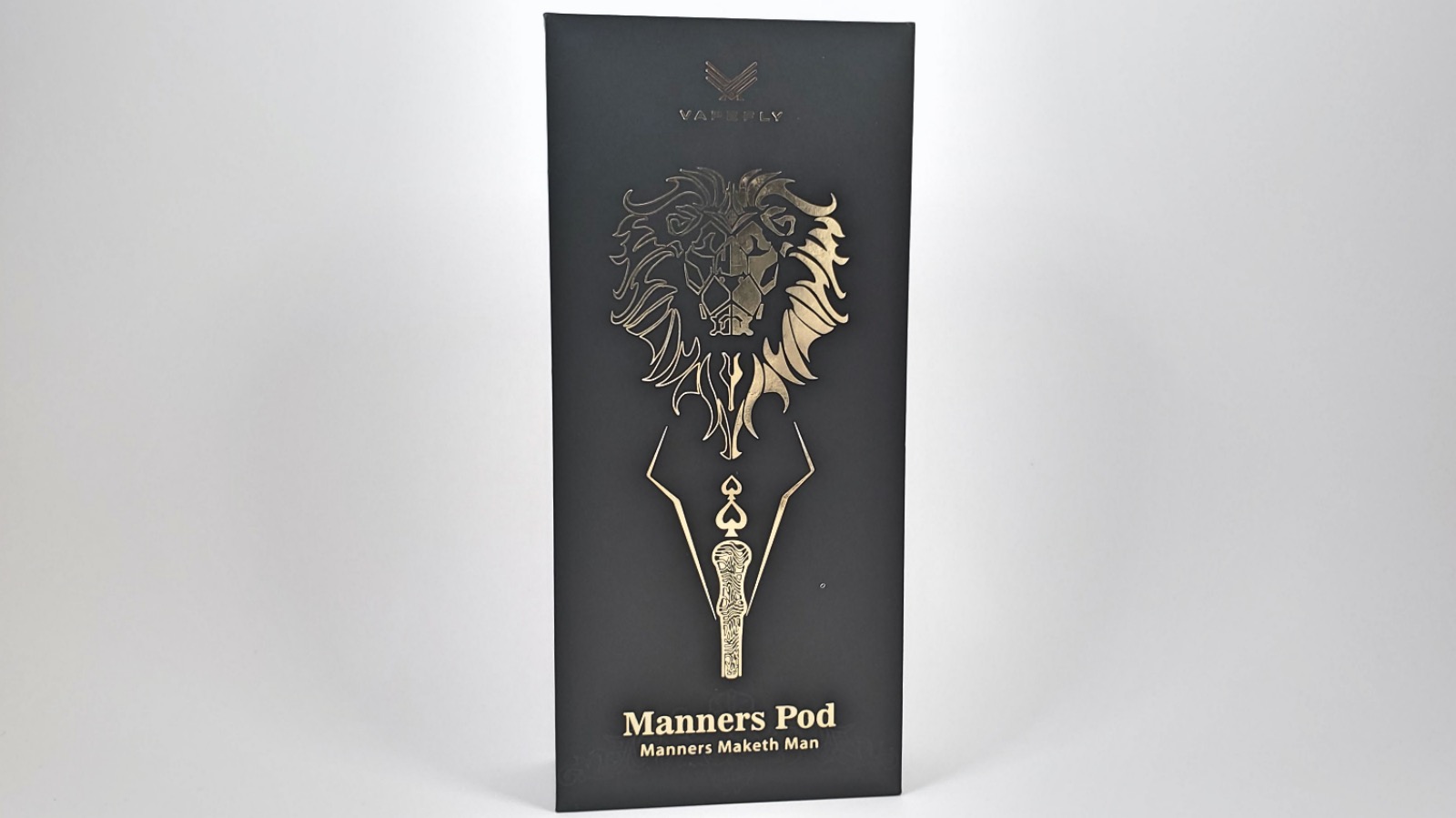 I can’t say whether or not the Manners device is better than the Caliburn but I have used the Xros and I love it. I do think that the Manners stands up well against the Xros. It’s hard for me to pick a winner actually. I like them both.

The Manners is really sleek, it looks good, performs well, the flavor is really good both coils, it has a nice draw, and I love having both auto draw and button-fire. Overall I think it’s a nice pod device. The only thing I don’t care for is the included mouthpiece but that’s not really a big deal.

The Vapefly Manners Pod was sent to me for review from Vapefly and you can get it for $19.99.