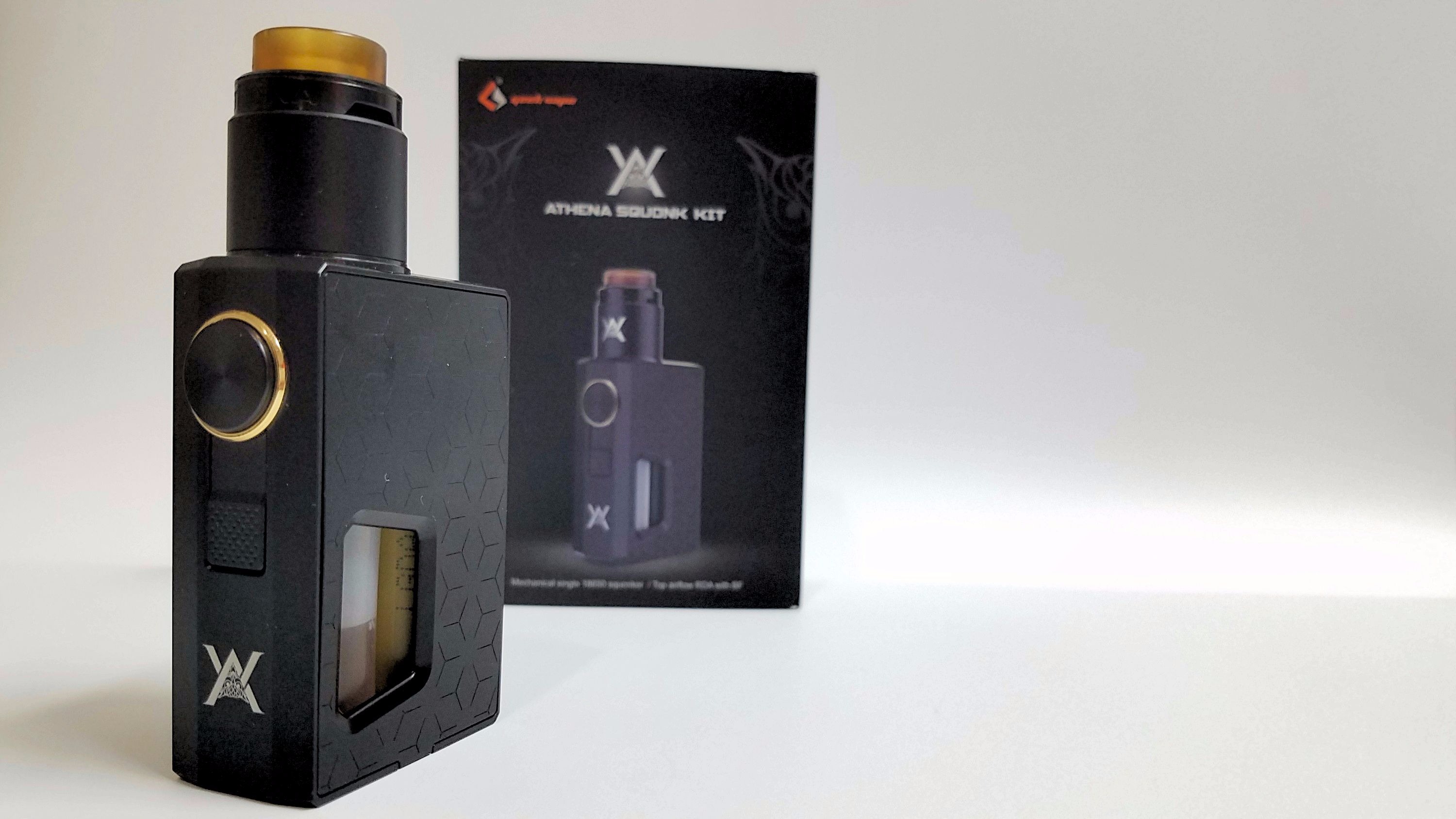 e-smoke.com sent me the Geekvape Athena Squonk Kit for free for the purpose of review. This is a stylish single-18650 battery mechanical squonking box mod with a matching bottom feeding RDA. It comes in colors of Black, Blue, Gunmetal, and Silver. It’s a $70 kit, but e-smoke gave me a coupon code, ESASK, which brings it down to $48 with free shipping. Get it here.

So like I mentioned, this is a mechanical mod. That means you need to understand Ohm’s law before putting an atomizer on here. You need to make sure that the battery you’re using can handle the amp draw from your atomizer. I’m using 30amp LG HB4’s on a 0.25 ohm build, in case you’re wondering how I’m running it. That would be a maximum 16 amp draw on a fully charged battery, not taking into account voltage drop. In reality, I’m likely drawing fewer amps. I’m not saying my build is safe, I’m just saying that’s what I’m running.

It’s made of aluminum and has a stylish design.

The Button and Safety Switch

The button is really nice and is surrounding by a metal gold ring, which adds to the stylish looks. The button pushes in really smoothly and I haven’t had any problems with it misfiring. Like many box mod mechs, the button pushes the metal battery strip into the bottom of the 510 assembly, making the connection with the battery and allowing it to fire. This metal piece also comes out if you want to bend it or clean it.

Under the firing button is a safety switch that prevents you from accidentally firing the device. It’s just a plastic switch that prevents the metal battery strip from making a connection with the 510. Even when pushing hard, the battery strip doesn’t come close to making a connection, so it seems to work well, but I’ve seen some people say that their device can still make a connection if they push hard enough. If that happens to you, I’d suggest trying to bend that plate a little. On mine, the switch works great, but my one complaint is that it’s not easy to move. It looks like it has grippy bumps on it, but those actually go inward, so they don’t help with grip at all.

There are two plates that allow you to access the device, one on both sides. The front plate gives you access to the squonk tube, the internal components, and the battery compartment. It has four small magnets that hold the door into place pretty well. There is a little play in the door, which might bother some people, but I don’t even notice it when I’m using it. It is a little rattly if you shake it hard enough though.

The rear plate gives you access to the battery so that you can push it out from the other side. This door has two larger magnets and holds sturdy. There’s less play in the back plate than the front one.

On the inside, there’s a plastic backplate that sits behind everything. You can’t easily pull it out. If you want to get it out of there, you’ll need to take apart the 510 assembly. This is a drawback because it’s easy to make a mess inside of a squonk device like this. If you get e-juice in there, it’s a real pain to clean.

On top of the device is the 510 connection, which also has a nice design on it. And what’s cool about this is that it auto-adjusts to fit pretty much any RDA you put on there, for example, if the 510 on the bottom of your atomizer is long, it will adjust lower. You’ll notice it adjusting inside the device while you’re screwing the atomizer on. It’s a really cool feature and replaces the typical spring loaded 510, which are prone to leaking juice into the mod. Geekvape did this in a really smart way.

It comes with two squonk bottles, one soft silicone bottle, and one hard PE plastic bottle. Each bottle holds 6.5 mls of e-juice. Unfortunately, both of these bottles kind of suck.

The soft one is so soft that it’s like squeezing a plastic bag. It’s totally useless.

The hard bottle is way better than the soft one and is actually usable, it’s just a little too hard.

Filling up the squonk bottles are really easy. For the hard bottle, you take the whole cap off and fill it up, screw the cap back on and make sure the fill tube is at the bottom of the bottle, but not all the way down or the tube will be blocked off and won’t squonk well.

I would recommend cutting the bottom of both tubes at an angle so that you don’t have to worry about it sitting flush at against the bottom of the bottle.

The cap on the soft bottle is actually two pieces and that’s because it’s so soft that you can’t screw anything onto it. So the bottom half of the cap is designed to stay on the bottle so that you can screw the top half onto it.

The squonk slot on the outside of the device is easy and comfortable to access, so no problems there.

Starting at the top with the drip tip, it comes with both an 810 drip tip and a 510 drip tip and adaptor. The 810 drip tip looks like its made of ULTEM, but Geekvape doesn’t say anywhere in their specs or sales page if it actually is, so I don’t know for sure.

As for the 510 adaptor, the o-ring is extremely tight. It’s hard to get drip tips on and off of it, but it’s nice that they’ve included it anyway.

The airflow control is right below the drip tip on the top cap, which is expected for a squonking RDA to prevent leaking. The airflow control ring can move left or right indefinitely without any stops and it’s built into the barrel. It doesn’t come off, which is a bit of con because e-juice gets in there and you can’t really clean it out very well.

There are two airflow slots and you have to use both. You can’t close one of them off. Wide open, you can get a ton of airflow through here but you can also close it down quite a bit for a restricted draw, even enough to get short but decent Mouth To Lung draw. I’ve also noticed that taking a hit on here is a little loud. The airflow isn’t smooth.

Something else about the airflow slots is that they are so close to the short drip tip that it’s easy to accidentally cover them with your lips. I also have big lips, so it might not be much of a problem for you, but I keep accidentally covering them. If you’re the type of vaper who likes to purge your RDA before taking a hit, you’ll also find that it blows the vapor right into your face, no matter how you position those airflow holes.

On the inside of the barrel, you’ll see that the airflow slots are pointed downward. This is so that they hit right on top of the coils. They seem to work okay. I get good flavor out of this RDA, but nothing amazing. Good though.

You’ll also notice two ridges on both sides of the inside of the barrel. These ridges line up with two slots on the base of the RDA. This forces you to put the barrel on the base in a specific way so that the airflow slots are always hitting the coils. It also makes it so that the barrel doesn’t spin separately from the deck when you’re trying to tighten or loosen the tank from the mod. I think it’s a nice feature and something that I really liked about the Sub Zero RDA from Sub Ohm Innovations.

You’ll notice that this has a gold-plated dual postless deck. The build deck sits above the juice well, which is actually a pretty deep juice well at about 6mm deep. I’ve found that it can hold about 1ml of e-juice.

Since this is a postless deck, you’ll need to measure your coils legs to right length before tightening them down, which can be a little bit of a pain. There’s a lot of room in here to build large coils too, which might make sense if you’re using it on a regulated device or dual battery mech, but since less wire has less ramp-up time, all that deck space isn’t really needed on the single-battery, Athena. Still nice to have it if you want it though.

It’s really easy to build on once you have your coil the right length. Just add some cotton, tuck it into the sides and under the deck and you’re good to go.

That’s about everything, so let’s wrap it all up.

The mod is engineered very well. One thing I don’t like is the loose front panel, but other than that it’s great. You can push the battery out easily, the 510 auto adjusts, there’s a safety switch, the button is nice, and it’s tiny and comfortable to hold. It also looks great.

Both of the squonk bottles could have been better though. The soft squonk bottle just plain sucks, in my opinion. It’s just way too soft. You have to squeeze the life out of it to get e-juice up into the RDA. The hard bottle is much better, but it would be better if it was just a little softer.

The RDA is decent and I get good flavor from it, but it’s one of those postless decks where you drop the coils in, which I think are a bit of pain to build on. And if you like to purge your RDAs to heat them up before hitting them, it blows the air too close to your face, so you might not like that. But the flavor is good, it holds a lot of ejuice, and it doesn’t leak easily.

Geekvape says the device is made with high-grade materials for maximum power output and that seems to be true. This thing hits hard and doesn’t seem to have much voltage drop at all. I tested this against the Pulse BF Squonker using the exact same fully charged battery and by swapping back and forth the Athena Squonk RDA, and the Athena has a very noticeable difference in power output. It just hits way harder.

All in all, I think this device is a big win. I love it and I’ve been using it non-stop. I think it’s absolutely worth buying, as long as you’re comfortable using a mech mod.

So like I mentioned, you can get the Athena Squonk Kit from e-smoke.com who sent it to me for review. You can get it in black, gunmetal, and silver. It’s normally $70 for the full kit, but if you use the coupon code ESASK, it’ll bring the price down to $48 with free shipping.