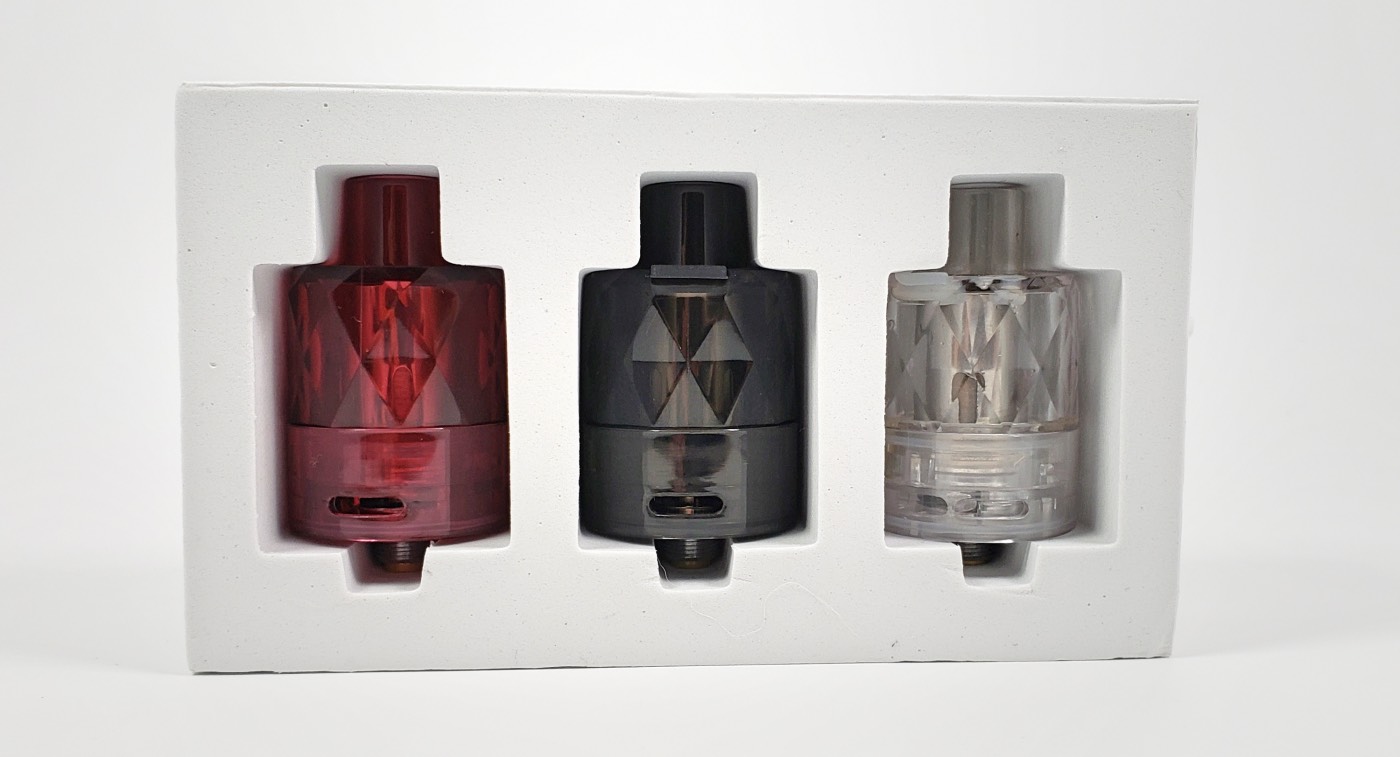 The Augvape Jewel sub-ohm tank was sent to me for review from Augvape. These actually came to me as a part of the VX200 Kit, but since you can purchase both products separately, I wanted to make individual reviews for both of them.

This is a disposable sub-ohm tank with an integrated non-removable mesh coil, a top fill system, and an adjustable airflow control ring. It’s a whole lot like any normal sub-ohm tank, except that it’s designed to be thrown away.

It’s pretty easy to see why Augvape named this the Jewel tank. The tank looks like an over-exaggerated jewel. It also kind of reminds me of a kaleidoscope. It’s not ugly or anything, at least not to me, but I don’t think it’s anything special either. I guess it’s what I would expect from a disposable tank.

The drip tip is like a 510 drip tip, so the airflow is a little restricted through it. It’s non-removable, so you can’t change it out. It’s comfortable enough for me though, so I don’t mind it.

To fill up the tank, you need to pull out this little silicone plug on the top. The fill port is a decent sized bean-shaped hole, so that’s nice.

The airflow is controlled with a bottom-airflow control ring. There are two airflow slots on both sides of the tank that can give you quite a bit of airflow and you can shut that down as much as you want too. The ring moves smoothly and doesn’t slip around or get stuck.

The coils inside of the Jewel tank are mesh, which is about as good as you can get for flavor in a sub-ohm tank right now. And these coils don’t disappoint. The flavor is excellent.

The coils are built at 0.15 ohms and are recommended to run between 40-80 watts.

The flavor isn’t as good as some of the other mesh tanks I’ve used like the Freemax Mesh tanks or the Geekvape Alpha, but it is good. I have no complaints at all about the flavor production.

The tanks are actually pretty nice, but I don’t think most people will care to buy a disposable tank, at least not as an ongoing purchase. You can get decent sub-ohm tanks for $20 or less these days and all you have to replace are the coils. It’s cheaper and results in less waste in the long run.

I do think they could be useful for people who work in tough jobs where they might break their gear all the time. I also think buying these as a one-time purchase would be good simply to have backups in case your main tank gets lost or broken or for people who have never tried a sub-ohm tank and they want to see what it’s like. It could be good for someone looking for a low-cost budget set up too, but there’s probably not a big audience for these.

Anyway, the tanks are actually pretty nice as far as performance goes. They might not be the fanciest vape product you could own, but they perform great.

The Augvape Jewel Disposable Sub-ohm tank was sent to me for review from Augvape. You can get packs of three for around $10-12 from most stores.

Here’s where you can get it: (affiliate)