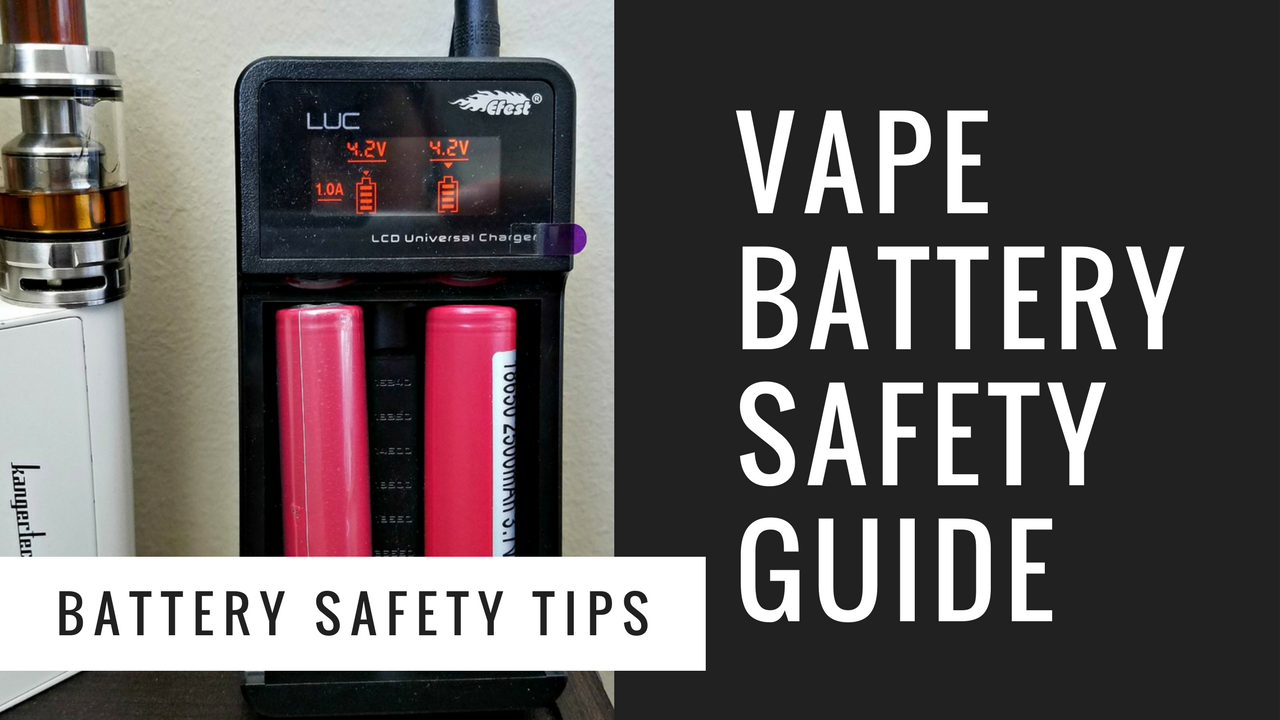 There has been a lot of talk of battery safety lately because there have been a lot of stories in the news about vape explosions. While the media claims that these explosions are caused by electronic cigarettes, the culprits are actually caused by improper use of the batteries that people are using in their devices.

Look at any e-cig explosion in the news and you’ll see that in every case, they are happening to people using mechanical mods or people carrying loose spare batteries in their pockets. I can’t think of one example of one of these disasters happening to anyone using a regulated device or someone who carries batteries in a protective case.

So with all of these stories in the media right now, it makes sense that CASAA.org would put out a guide to battery safety.

I’ll run through some of the tips that they’ve compiled along with my own thoughts and insight for each tip.

1.) Every device has specific power requirements and you need to use the right batteries for your device

This isn’t a common issue since most devices can only accept certain types and sizes of batteries, such as 18650s, but there have been a several occasions where I’ve seen people on vape forums ask if it’s okay to use 18650s they’ve found at Walmart. These would be the Westinghouse 18650 batteries, which only support 1.2 volts. These are not designed to handle the voltage that we use in our vaporizers and would be very dangerous to use for our purposes. I recommend buying only the batteries that Mooch recommends.

2.) Do not make any modifications to the device, including blocking ventilation slots

As far as blocking ventilation holes, you don’t want to do that in the case that you might have a battery failure. If a battery shorts to the point of venting, the gases wouldn’t be able to escape and could lead to the device blowing up. If you’re putting stickers or a new wrap on your device, make sure the vent holes are still open.

Also, some modifications might require opening up the device. Just like with any electronic device, you shouldn’t open it up if you don’t have electrical experience. One reason would be that you could damage the board and cause a malfunction when you charge or use the device in the future. Opening up a device would also be especially dangerous in devices with built-in, non-removable batteries because these batteries might be soldered in. If you take apart a device and the solder disconnects and the battery touches another piece of metal, it could short and vent.

Like I mentioned earlier, I highly recommend only buying batteries from Mooch’s suggested batteries list. You also don’t want to buy from sites like eBay because you might get batteries that have fake wraps on them. I suggest buying from IMRBatteries.com, Illumn.com, Liionwholesale.com, and nkon.nl. Those are the best places you can go. If you want to buy from a vape vendor, rtdvapor.com and vapenw.com are generally trustworthy.

4.) Store batteries in a protective case or sleeve

Many of the battery explosions in the news lately are caused by loose batteries rolling around in pockets and coming into contact with metal of some kind, such as keys or coins. The batteries we use for vaping are not like the alkaline AA batteries we use in other electronics. Lithium-ion batteries can short if metal comes into contact with the positive and negative parts of the battery. Sleeves and cases are really cheap, anywhere from 0.50 cents to a couple of bucks, so don’t be cheap here.

5.) Never exceed the rated capacity ratings of the battery and don’t go by pulse ratings

Batteries have different ratings. The Sony VTC4 for example is rated for 30 amps continuous.

So going back to the continuous rating of 30 amps of the VTC4 – this means that you shouldn’t draw more than 30 amps from the battery. If you’re using a mech mod with an atomizer built at 0.1 ohms, on paper you would be drawing 42 amps from a 30 amp battery. That would not be safe. Now most expert mech mod users would say that you would actually be drawing less due to voltage drop, but I wouldn’t recommend pushing these limitations either way.

Exceeding ratings isn’t as big of a problem in a regulated device, but it can be. The Westinghouse batteries I mentioned earlier are a good example of a battery that wouldn’t be safe in any vape device since they cannot exceed 1.2 volts or 6 amps.

6.) Do not drop batteries and if you do, inspect for damage

I’ve talked about this a little bit before and basically, if the battery dents, you risk having an internal short. For one, a dent in the top of the battery can cause the positive contact to touch the venting disk. Also, there are many layers within a battery and a dent can cause these layers to fold over each other.

There’s no way to know how big of a dent might cause a short, but you should probably just buy a new battery if you drop it. If you don’t feel like your battery has suffered a big enough fall to worry about, just make sure to check for a torn wrap. If any of the battery is exposed beneath the wrap, rewrap it or buy a new one.

7.) Do not subject batteries to extreme temperatures

Extreme temperatures include both cold and hot.

At temperatures below freezing, or 32 degrees fahrenheit, charging a battery can cause plating of metallic lithium, which is permanent damage and makes the battery vulnerable to failure from vibration or stress. The document from CASAA says that freezing a battery can cause the electrolytes to freeze and crack the battery, but from what I can find in my research, electrolytes in li-ion batteries will not freeze until it reaches -40 degree Fahrenheit, so it’s probably not likely unless you live in the coldest areas of Russia.

Charging or using batteries at high temperatures, above 113 °F, for prolonged periods will degrade the performance of the battery. Storing a battery above 104 degrees will result in anywhere from 15% to 35% permanent capacity loss after a year.

8.) If the battery gets hot during use, STOP!

It’s pretty typical for a battery to get warm while vaping, but if the battery gets hot, that’s a problem. It could mean that you have a short, for example the battery might be damaged or your atomizer might have a short somewhere. You might also be pushing your battery beyond its limits if the battery gets hot. If you notice that the battery is hot, put it in a fire-safe place where it won’t harm anyone until you know it’s safe. You should consider buying a new battery in this case, especially if you can’t find a reason for the short, for example if you’ve confirmed that your mod or atomizer was not the cause.

9.) Use a quality charger designed for li-ion batteries

Using a cheap or low-quality charger might charge your batteries too fast, which could cause permanent damage. My recommendation would be to use a reputable charger from a company like XTAR, Nitecore, or Efest. That would be for external batteries.

10.) Batteries should be replaced after a year

This is a recommendation from CASAA that is very conservative. I say that because batteries can last longer than a year and even old batteries aren’t likely to result in a dangerous situation. But it’s good for everyone to know that after around a year, your batteries will hold less charge and might not last as long. If you put high-stress on your batteries, you might see poor performance after about 6 months.

11.) Never use a battery with a damaged wrap

This is a serious issue that should not be ignored. A torn battery wrap exposes the metal of the battery that absolutely needs to be covered. If that exposed battery touches metal while the contacts are also touching metal, it will cause a short. If you have a damaged wrap, you should either toss the battery or rewrap it yourself. You can get 10 wraps for 18650 batteries from IMRBatteries.com for only a $1, so they aren’t expensive by any means.

Here are couple of my own tips.

Most chargers can detect when a battery is fully charged and will shut off, but malfunctions happen and the charger might keep going until the battery overheats and starts a fire. I never charge anything overnight and I try to only charge my batteries when I’m in the same room as the batteries.

13.) Use proper orientation in mechanical mods

If the battery is placed into a mech mod upside down, current will flow through at almost zero-resistance, which will immediately exceed amp limits.

Did I Miss Anything?

So those are the basic tips you should know. There are more advanced safety tips when you get into mechanical mods and devices like series unregulated mods, but if you’re a beginner, you should definitely not be using a mech or unregulated device.

If you have any additional suggestions (or corrections on anything I’ve said), please let me know in the comments.

The battery safety guide from CASAA also includes information about why battery safety is important, how li-ion batteries work, how they are made, how they can fail, and what to do when something goes wrong. So if you want to learn more about battery basics, I highly recommend giving it a read.