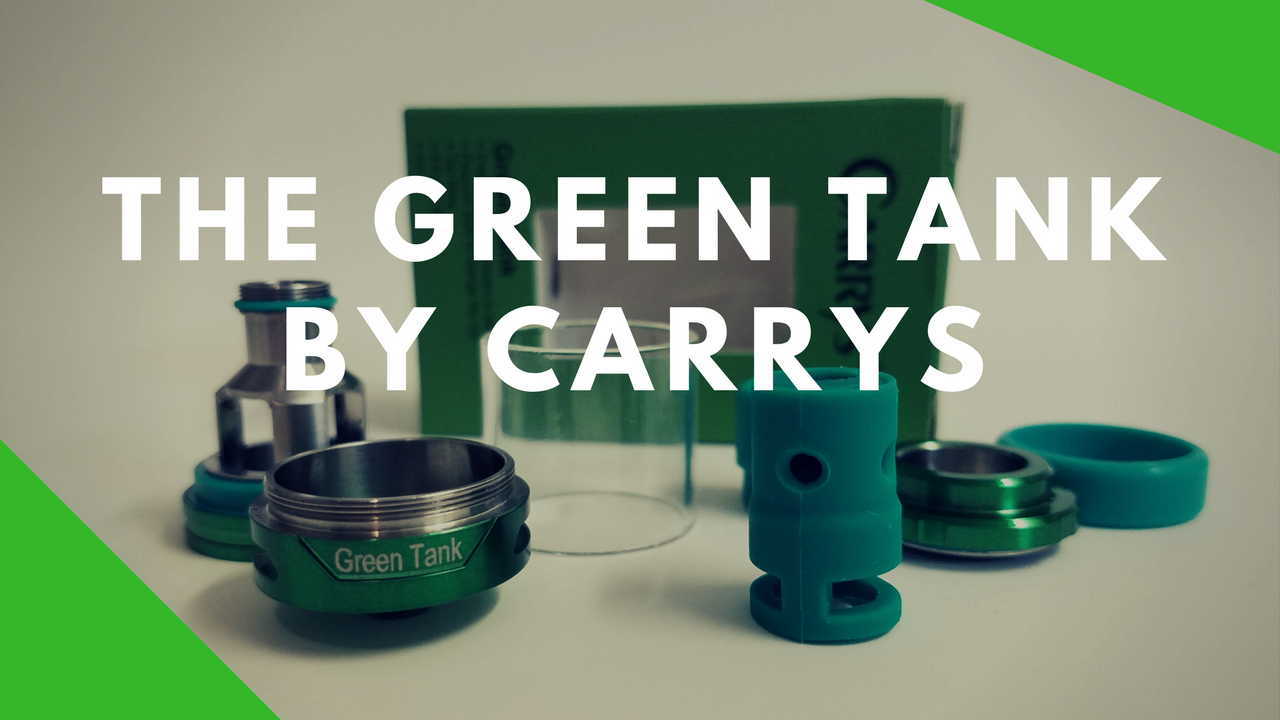 The Green Tank was sent to me from HeavenGifts.com for the purpose of this review. This is a sub-ohm tank from a company named CARRYS. I’ve never heard of them before, but they have a website at carrystech.com if you want to look them up.

The tank is made of stainless steel. The threads are not the highest quality. I get a little crunchiness when screwing the bottom of the tank into the deck. The tank as a whole is also really light, which is nice. It’s not heavy at all.

The Green Tank has a food-grade silicone 810 drip tip and you can replace this tip with an 810 drip tip of your choice if you don’t like it.

The silicone is an interesting choice for a drip tip. It’s like those silicone baking pans or silicone ice cube trays you see at the store. I looked up the heat limits of silicone and while it depends on the grades of silicone used, it can typically handle about 400 degrees fahrenheit of continuous heat, so you shouldn’t have any problems with it hardening or deforming.

It’s a top-fill tank, but it uses an older style of top-fill. Basically you unscrew the top cap and fill directly into the tank. The problem with this method is that you have to be careful that the tank doesn’t come off of the base, otherwise you’ll have e-juice everywhere. It’s not a good filling system, but to be fair, the o-ring that holds the glass in place is pretty wide so it seems to hold it together firmly. I haven’t had any issues with it.

The top cap also has little grips to help remove it, but they are so small that I don’t think they help much.

Carrys says that the Green Tank has an adjustable bottom airflow, but it’s not adjustable at all. They included what they are calling a silicone airflow control ring. Its basically a tank protector ring. You might remember that the original Aromamizer used this same idea for their tank and people hated it. It’s the same deal here, except what’s even worse is that this ring doesn’t have any holes. You have to slide it up and down so that it blocks off one airflow and leaves the other open, but it looks really tacky. It works though.

You have two large airflow slots on each side of the tank. Even as large as the airflow slots are, I would have expected more air to come in, but it’s a little restricted. I think that restriction might be caused by the coil or the coil cover. It’s really not that bad though. It’s just a slightly restricted lung draw.

It only comes with one coil, which sucks, but I guess that’s why it’s only $11. I would have liked for them to include an extra coil, not only to get a little more use out of the tank out of the box, but also because you never know if you might get a bad coil, which I think may have actually happened to me (more on that below). And if the coil is bad, you won’t be able to use the tank at all out of the box.

The coil that I have seems to read at various ohms depending on the device I put it on. On the Predator I’m getting 0.66ohms, on the Smok Alien it’s reading 0.95ohms, and on the Lavabox DNA75 I’m getting 0.72 ohms. I don’t think I’ve ever seen a tank read so differently on different devices and so far off from what it’s supposed to come out to, which is 0.5ohms.

I don’t know if it’s the fault of the coil or of the tank itself. That’s another reason why they should have included more than one coil head.

The coil head fits into a food grade silicone sleeve. I’m not a fan of this sleeve, especially because the coil head has a long cotton strip wrapped around it. When you try to push the coil head into the sleeve, the cotton strip moves out of place. It’s not a good design. Once it’s in the sleeve though, it just pushes right into place.

The coil is rated between 30-80 watts. I think 80 watts might be a little too high for this coil but even after chain vaping, I can’t get a dry hit. It just tastes little funny. I prefer the flavor at around 65 watts. Anything above that seems a little to affect the flavor. At the lowest range of 30 watts, it works fine and has good flavor.

My biggest concern with this tank is that the ohms keep reading differently every time I put it on a device. For example, with the Smok Alien, I would get 0.7ohms, then take it off and put it back on and get 2.1 ohms and an atomizer short message, then do it again and get 1.2ohms. It’s all over the place, even on the same device! It could be the coil head or it might even be the tank. So that’s a pretty big con.

But this is a really basic, no frills tank, which is what you’d expect for only $11 brand new. And that’s exactly what they were going for here. They mention the cheap price on their sales page, so that’s really what they set out to do – create a really basic sub-ohm tank that anybody can afford. It looks nice, the flavor is decent and it produces a lot of vapor. I personally wouldn’t buy this tank with the options that I have available to me, but for someone on a really tight budget, $11 isn’t too bad for a sub-ohm tank like this, as long as the coils aren’t faulty.