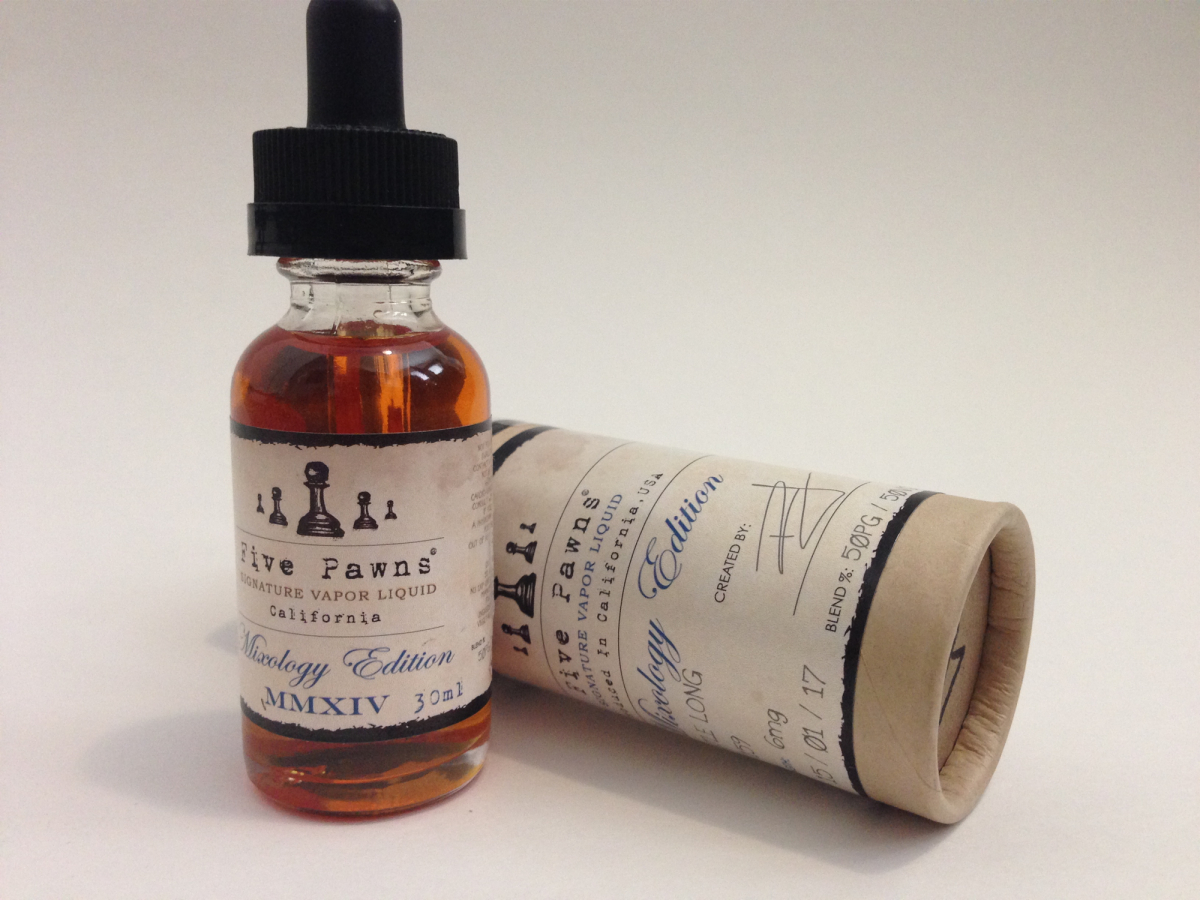 Like I mentioned in my review of Cosmic Fog’s Milk and Honey, Rolling Papers Express sent me two e-liquids to review. This is the second one.

When I was deciding on the flavors I wanted to try, I was looking for something truly unique. I was tempted to go with something that I was sure I would like, like a sweet dessert or candy flavor, but I thought it would be more interesting to try something different. After some research online, Castle Long from Five Pawns looked like the answer.

Check out my video review or read the following blog post for my thoughts.

For $35 per bottle, it makes sense that the presentation of this e-juice is top notch. Castle Long comes in a sturdy cardboard tube with Five Pawn’s logo on it, along with typical warnings and specific details of the e-liquid inside, such as nicotine strength, lot #, expiration date, and VG/PG ratio.

The bottle itself is also nice. Five Pawns has very classy branding, which I like a lot.

The bottle is higher quality than typical 30ml e-juice bottles. The childproof cap doesn’t get stuck and the glass dropper has a finer tip than most. One thing that really annoys me about 30ml bottle droppers is that the tip openings are large which makes them drip on their own. I hate having to rush to get the dropper to my atomizer before it drips onto the table. Five Pawn’s droppers prevent that from happening. It’s a minor detail that I appreciate.

Castle Long smells like Kentucky bourbon, like you’d expect, but it’s not overpowering. It has a hint of sweetness as well. It smells quite good.

My setup for this review is the eVic VT set at 25 watts with the Veritas RDA on top. The Veritas is built at 1.42 ohms, single coil.

The first hit surprised me, even after reading other reviews. The flavor is just so unique and different. The bourbon taste comes through nice and clean. It’s not an overpowering bourbon flavor, but it should be plenty of flavor for bourbon fans. There’s also a bit of a nutty flavor, which is nice and gives this e-juice a distinct taste.

Castle Long has nice vapor production. The vapor is thick, but doesn’t linger.

At 6mg nicotine, it has almost no throat hit at all. It’s really smooth. I also don’t get any flavor fatigue. The flavor just stays the same every hit.

What Other People Are Saying

There aren’t a ton of reviews online for Castle Long, which I’d bet is for two main reasons; it tastes like liquor and it’s expensive. But the people who have taken a chance on it really seem to like it.

Just about every review I’ve seen talks about how unique and complex the flavor is. I don’t have a refined palette, so I’m not the best judge of flavor complexity, but it’s pretty easy to see that Castle Long is in a different class.

Most reviews point out that Castle Long has a coconut taste. One person described it as a rum-steeped coconut flavor and another reviewer said that it tastes like macaroons soaked in bourbon.

Another person said that Castle Long pairs well in the evening with food and drink. This is a great idea, although I haven’t tried it.

Everyone seems to agree that Castle Long is good on occasion, more like a treat, but not really an “All Day Vape.”

If someone handed you a vaporizer with Castle Long in it and they didn’t tell you what the flavor was, you’d guess it immediately after trying it. This is great, because there are so many e-liquids out there that taste similar to their namesake, but we’d never be able to guess their flavors without knowing what it’s supposed to taste like.

Five Pawns did a great job with getting the flavor down so precise.

The biggest drawback to Castle Long is the price. It’s expensive. But if you’re looking for something unique, complex, and different from all of the fruity and dessert flavors on the market, I’d say the price is worth it.

In the video review I said that I would probably not buy this again for two reasons – one, I’m not the biggest fan of Kentucky bourbon and two, this bottle will probably last me forever. But after having vaped Castle Long on many occasions over the last month, I’ve changed my mind. It will probably be a long time before I run this bottle dry, but I’m really enjoying it when I’m in the mood for it. I would buy Castle Long again.

I highly recommend Castle Long, whether you’re a Kentucky bourbon fan or not. Well, unless of course you drank too much bourbon in college and just the smell of it makes you sick (that’s me and vodka, or peppermint schnapps, or Goldschläger, or…ok you get it. I drank a lot in college ;).