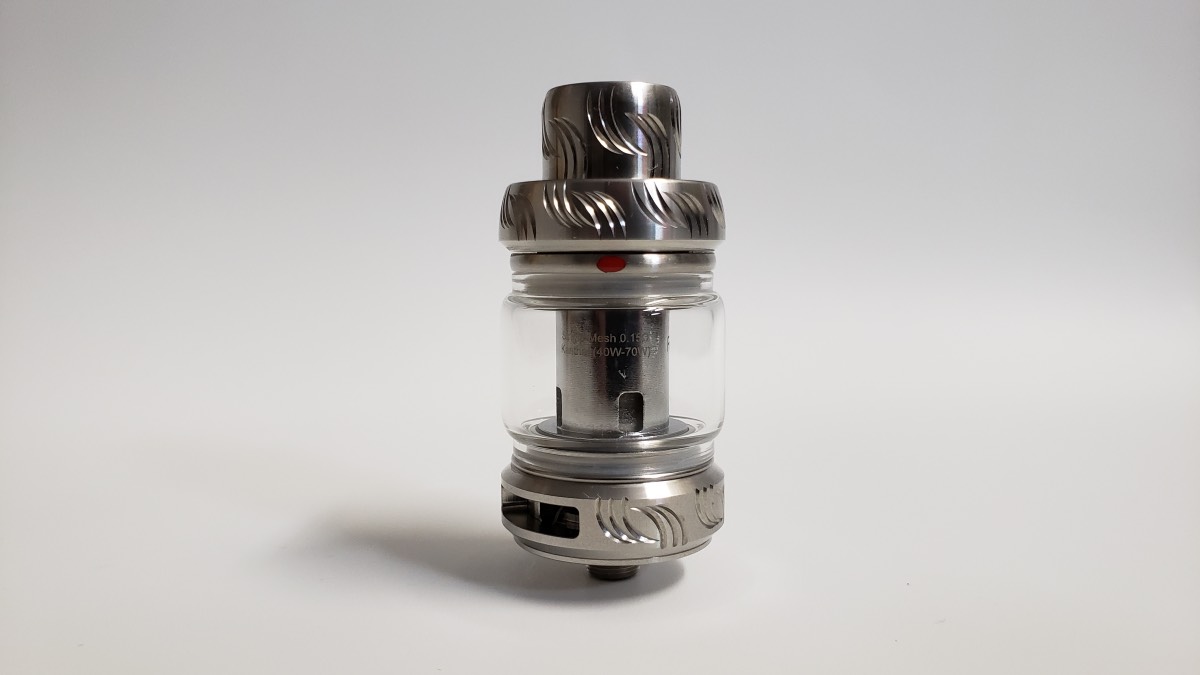 The Freemax Mesh Pro Subohm tank was sent to me for review from BuyBest.com. Get it here (affiliate). Freemax claims that this is the world’s first double, triple, and quad mesh coil sub-ohm tank on the market. It’s been out for a few months now so they aren’t the only ones on the market with a tank like this today, but this one is worth checking out. I reviewed the Freemax Fireluke mesh a couple of months ago and I absolutely loved it. Even though BuyBest sent me the pink model, I still thought it was just a great looking design. The Mesh Pro is the same for me. It just looks great. The shape is a little strange, but the design is nice. And fortunately, this time I got a model I’m more interested in.

Like other Freemax products, there are a ton of colors to pick from. 17 by my count, which is just nuts. It might be tough to find a single vendor who carries every color because that’s a lot of stock, but from what can tell BuyBest actually carries all of them. The drip tip is a wide-bore 810 drip tip. It’s designed for high-wattage cloud chucking and it works perfectly for that style of vaping. Each design will match whatever tank design you get and they all look great, in my opinion.

Freemax also added a u-shaped anti-spit back feature to the drip tip. We’ve seen this on other drip tips in the past and they usually work okay. It works fine here too, but you can still get a little spit back.

There are o-rings on the drip tip but also built into the top cap, which I really like because that makes this tank compatible with any 810 drip tip you might have. On the top cap, there’s a red mark where the cap meets the glass. This is where you need to push top open the cap and fill it up. The sliding cap makes filling up the tank really easy to do, so I like it.

One thing I noticed when I first took the tank apart was that there was some sort of liquid under the top cap where top slides over. My guess is that Freemax added something here to make sure that it moves smoothly right out of the box. I have no idea what that liquid is, so you’ll want to wash this before using it.

The fill port is nice and big and easy to fill for the most part, but the sliding cap sort of gets in the way when filling it. Not a big deal, but worth mentioning.

And on the very bottom, there is this enormous seal. I’m a huge fan of tanks that have big seals like this because it keeps the glass tube in place firmly and prevents it from leaking. The glass section that comes pre-installed is a smaller bubble glass tube, which holds 5ml of e-juice. That’s a good amount of e-juice, but if you’ve ever used one of these tanks before, you know that it’s still not enough! You’ll go through e-juice like crazy on these high-wattage mesh tanks, or at least I do because I like the wattage high and because the flavor is so good I just can’t stop vaping.

You’ll also get a much wider and rounder bubble glass tube that holds 6ml of e-juice. It’s nice that you get this to hold a bunch of e-juice, but I personally don’t like the way it looks, so I don’t use it.

If you’re in the UK, there’s a TPD 2ml version available too.

Like most pre-built mesh coils, these work great for flavor and wicking and it’s because they fire so efficiently around the entire cotton wick. They heat up fast and deliver instant flavor. And you can really tell how fast this thing fires because you can hear it crackle immediately when you hit the fire button. It’s crazy.

As for the material of the coils, they are made of wood pulp cotton, which is a combination of 80% flax and 20% cotton. They say this gives it a life-span of about 2-3 weeks.

On the sides of the coils are what seem like typical wicking holes but if you look at the images on Freemax’s website, you can see that they are very wide slots, so these coils can wick a ton of e-juice at all times. This works great for preventing dry hits when vaping at really high wattages.

There are five different coils you can get with this tank all of them mesh coils and all made with Kanthal metal, except for one with stainless steel for temp-control vaping.

The coils that come in the kit are the double mesh and single mesh coils. I’m a little disappointed that they only included two coils. For them touting so much about this being the first double, triple, and quad mesh coil tank and then they only include a single and double coil head is annoying.

So let’s quickly cover the coils that I have. First, you’ll see that there’s a big difference in size. The single mesh coil is a little big but up next to the double mesh, the difference is substantial. These are huge coil heads!

Single Mesh Coil – This is rated for 40-70 watts. At 40 watts the flavor is good and cool and it gets much better at 70 watts. The flavor from this coil is noticeably less than the double mesh coil, but it’s still pretty good.

One thing I’ve noticed with both coils is that there’s a somewhat long break-in time. Probably about half a tank before they really start performing at their peak.

All of the coils are also compatible with the Fireluke Tank and the Fireluke Pro, but NOT the Fireluke Mesh tank. I haven’t tried the triple or quad coils, but a lot of people have said that the flavor is amazing and even steps above the flavor production of the single and double, so they sound good. This a bottom airflow tank and the airflow control rings moves left and right with stops on both ends. It moves really smooth and feels really good.

The base holds your coil and contains your adjustable airflow ring. I also like the seal for the glass tank here. It’s a strong thick seal that works well.

One of the features that Freemax mentions is that the 510 pin on the bottom is adjustable from 0.5 to 2mm. It’s not a floating pin, so that means technically you can use it any device. It’s a nice feature since you never know when you might get a random device that has weird connection issues so it adds to the compatibility of this tank, but I still wouldn’t recommend this for any type of mech. I know some people say it’s okay, but personally, I just don’t trust pre-built coils on mechs, so even if the pin extends, I wouldn’t trust the coil. I have to say, I’m extremely impressed with this tank. I’m also really impressed with how detailed Freemax’s website is about everything going on here. Some manufacturers hardly say anything about their products, but Freemax just lays it all out there.

I’m disappointed in the sliding top cap because it looks like the bearing fell out of mine, but I can’t think of anything else wrong with it. Except for maybe that it’s massive. Everything about the tank is huge. Every single part on here feels super-sized. It might not come through on video, but if you hold one of these and take it apart, it just feels big. But if you don’t mind that, you’ll probably like it.

So that’s it for the Freemax Mesh Pro tank. It’s an awesome looking tank with amazing flavor. If you want high wattage, massive clouds, and extreme flavor, you’ll like it. I got this from BuyBest.com and you can get it from them for about $25. (affiliate)