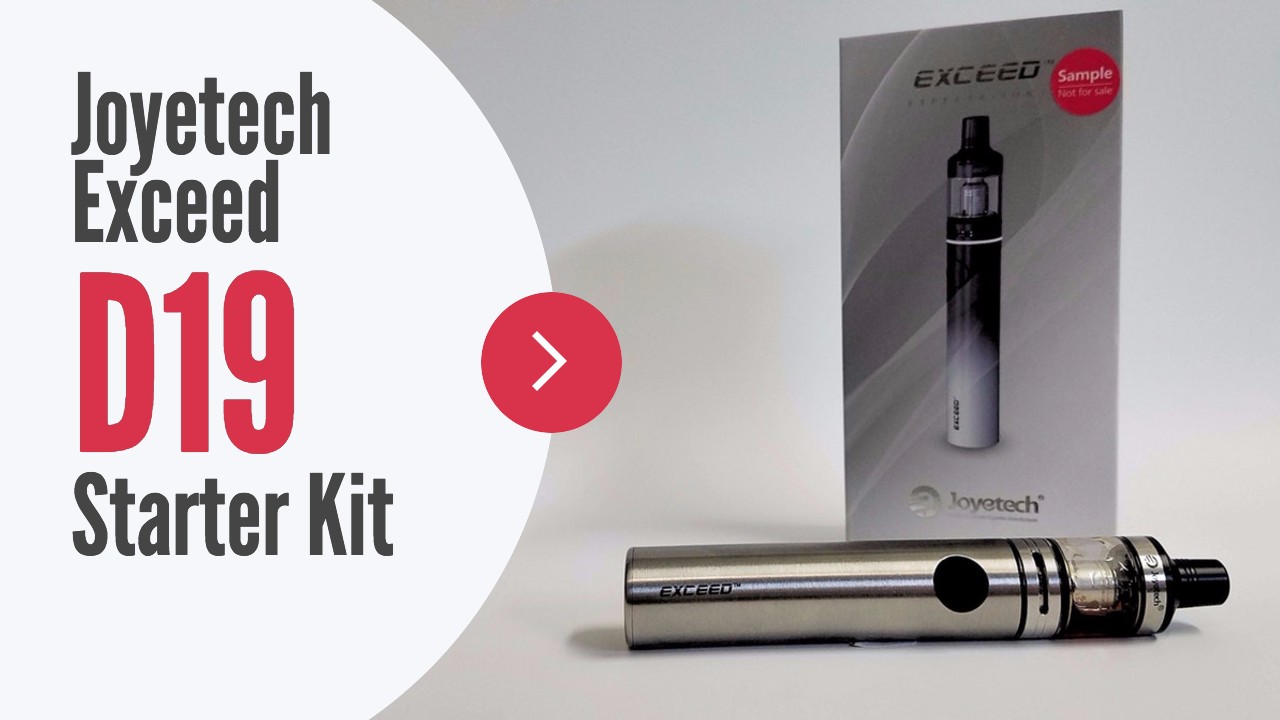 The Exceed D19 Kit was went sent to me for the purpose of this review by HeavenGifts.com. This is beginner kit that comes with a small battery and a tank. You can get the kit for $27.44.

The battery has all of the protections you’d expect – over-charging, over-current, and over-discharging. Joyetech has included two sets of battery protection circuits to make sure that there isn’t a failure for any of these issues.

This battery and tank is tiny at only 19mm in diameter. The 510 pin on the battery is spring-loaded and gold-plated. 5 clicks turns it on.

You can switch the modes by turning off the device and then holding down the firing button until the light ring changes color. Direct output will show a white light and constant voltage output shows an orange light. Joyetech doesn’t explain how each of these modes work, but I’m assuming they work like most devices that have modes like this.

Direct Output: Adjusts your voltage or wattage based on the amount of battery charge you have left in the device. So as the battery dies, the less power that gets delivered to your atomizer. It’s kind of like a mech mod. You get less vapor when the battery charge is low. This could be useful if the battery is low and you can’t get somewhere to charge. You’ll be able to eke out some more hits before it dies.

Constant Voltage Output: Will give you the same maximum voltage that it can no matter how much battery life is left. You’ll get a strong hit until the device dies. The one drawback here is that it can make your battery charge reduce faster.

The max wattage of the battery is 40 watts, but I think it adjusts based on the ohm reading of your coil because there’s no way the MTL coils could handle 40 watts. It’s probably optimized for each coil head. Using the 0.5ohm coil head, you are getting just above 35 watts. Those extra 5 watts are probably just there for variance because I’ve tried other tanks on here and they don’t work.

You can check power levels by pressing the fire button.

This charges using a regular mini-USB cable. Joyetech says you can charge using either a PC or a USB adapter. I always prefer to use a USB wall adapter to charge vape devices, but if they say it’s okay to use the USB port on your computer, it should be safe. The light will stay on while it’s charging and will turn off when it’s fully charged.

This does have passthrough functionality, which means you can vape it while it’s charging.

That’s about it for the battery. They’ve kept it very basic and easy to use, which caters exactly to the audience they’re marketing this to.

I had no problems at all with wicking on either coil. Even the MTL coil head wicked max VG e-juice without any problems. I chain vaped and never got a dry hit.

I’m not a big fan of the airflow control ring coming off because I worry that the rubber piece beneath it might tear. That might not actually ever happen, but it’s just a thought I had. Other than that though, the airflow control works great. It moves smoothly and hits a stop on each end, so you can’t just turn it indefinitely. There is only one airflow channel, but it seems to bring in just the perfect amount of airflow for the tank.

You have the option of using either the one large airflow hole, or the three tiny airflow holes next to it. The airflow works differently depending on the coil that you use.

Each of the different airflow options have enough noticeable variance on both coils that I think they did a great job here. There’s a good option for whatever your preference is.

This is a top fill tank with decent sized fill holes, so you shouldn’t have any problems filling it up. The mouthpiece screws right off and makes it easy to fill. There’s also a rubber seal under the mouthpiece that prevents the tank from leaking from the fill holes The drip tip can’t be replaced, so that’s a small con.

Performance
This setup works great. You can get a nice strong hit at very low wattages. I get pretty good flavor and a lot of vapor too. I would have liked the 0.5ohm coils to heat up faster, but they still work nicely. I really prefer this setup for Mouth To Lung vaping anyway.

Final Thoughts
The device as a whole is sleek and tiny. The style and design is nice. It performs great. The flavor is good on both coil heads. Overall I’m really surprised at how well this tiny thing works.