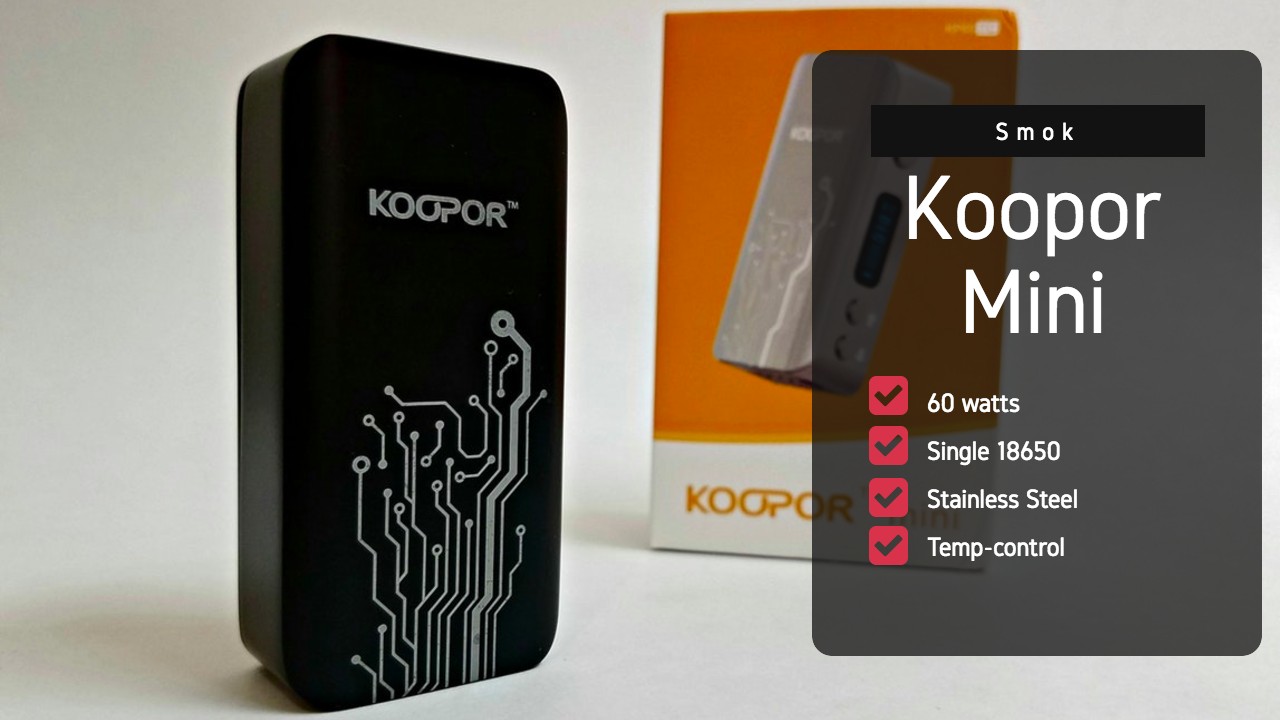 This is a single-battery 60w mod from Smok that came out sometime around August 2015. I’ve always wanted one, so when I saw a sale, I bought one.

In the box you get:

The box itself looks nice. It’s not a work of art, but it’s solid. I’ve always really liked the design of the lines on the casing. Other than that though, it’s pretty basic.

There are vent holes both on the battery cover and the bottom of the device, which allows the device to breathe and also protects you in the case of a venting battery.

The buttons are nice and clicky, which I like a lot. The USB port is on the bottom, which is fine since the USB port can’t be used to charge.

One drawback that I’ve found is that there’s overhang with pretty much any atomizer on the market unless you’re using an old school 16mm clearomizer.

The Koopor Mini has a battery door held in place with magnets. I think they should’ve used stronger magnets. The lid seems to be pretty easy to slide off.

It also comes with a rubber cover to protect the device. The cover works fine and is easy enough to slide on. It’s annoying to take off and on every time I need to change the battery, but if you want to keep the device protected, that’s your only option.

The size is fairly small, although you can see how far we’ve come in the last two years. For example, the Smok Alien and the Predator 228 are just slightly bigger, but they are dual battery mods. So yeah, relative to the size of mods today, it’s kind of big.

The Screen and Functionality

Like most devices, 5 clicks turns it on. When it’s on 5 clicks locks it but doesn’t turn it off. To turn it off completely, you can do that in the menu. This is a bit of pain, but I actually like this feature for added protection. You can actually lock the device with 5 clicks, then go into the menu and turn it off. When you turn it back on, the device is still locked and requires 5 more clicks to unlock it. That’s a lot of clicks if you’re worried about it ever accidentally turning on and firing in your pocket or backpack or something.

The screen shows you everything you need to know, like the battery charge level, the ohm reading of your atomizers, the temperature or wattage you are at, and if it’s locked.

Within the menu, you can…

The one thing that I don’t like about the menu is that you can’t press a button to immediately make a selection. You have to wait a couple of seconds for the device to select whatever option you’ve highlighted. I don’t know why they didn’t make the fire button work as the select button.

Dual Driver System – they say this dual drive system “bucks and boosts” the voltage to improve the voltage accuracy. They also say that it has high-frequency resistance sensing technology which is designed to detect atomizer resistance every 250 microseconds or 4000 times per seconds. They say this makes sure that temperature control is working accurately at all times.

There are three settings that allow you to increase ramp up time in temperature control – Soft, Medium, and Hard.

I don’t vape in temperature control so I’m not an expert, so rather than tell you my experience, I’ll tell you what I’ve learned from other reviews.

Basically, temp control works, but it’s not very accurate and it’s also really slow. If you want more accuracy, you’ll have better luck adjusting the coefficient manually. People have said that even in the Hard ramp up mode, it ramps up really slow.

The USB port is designed only for firmware updates, not for charging.

The Koopor Mini is supposed to be firmware upgradeable, but Smok didn’t make it possible for consumers to update the firmware themselves. They required that you pay for shipping to send it to someone who can do the firmware update for you. So that was pretty stupid of them to do.

This is a two-year-old device now so I don’t even know if they will still do a firmware update, but I believe that any models you find on the market today will already have the latest update, because mine does, or at least I think it does, since mine supports stainless steel in temp-control mode and the original didn’t.

The battery life is terrible on this device and since this is a single-battery device, it compounds the problem, especially if you vape at higher-wattages. Anything above 30 watts will drain the battery fast. But if you’re a Mouth To Lung vaper vaping at 10-20 watts, you might be able to get through the day on one battery. Most single-battery devices have poor battery life, but this one seems a little worse than most.

Should You Buy It?

So would I recommend buying this? In most cases, probably not.

I’ve been using this mod with the Asvape Cobra and I’ve been liking it. It’s fairly small, it’s not too heavy, it performs the way it should, at least in wattage mode, and it looks nice.

Battery life is absolutely terrible, so that’s a huge con. I get maybe 30 minutes out of this at 40 watts. But if you are a lower wattage vaper or if you don’t vape all that often, it might get you through the day. But you might have better luck using a high mAh battery.

And if you’re a temperature control vaper, you probably won’t like this one very much either.

The average price for this is $30, which is not worth it. You can get much more out of modern dual battery mod and still maintain the small size, so I wouldn’t choose this over a nicer, newer mod. But if you see a really good deal on this, I think it might be worth picking up as long as you’re comfortable with the cons I’ve mentioned. I found it on clearance for $15, which is why I bought it, but I wouldn’t pay any more than that.