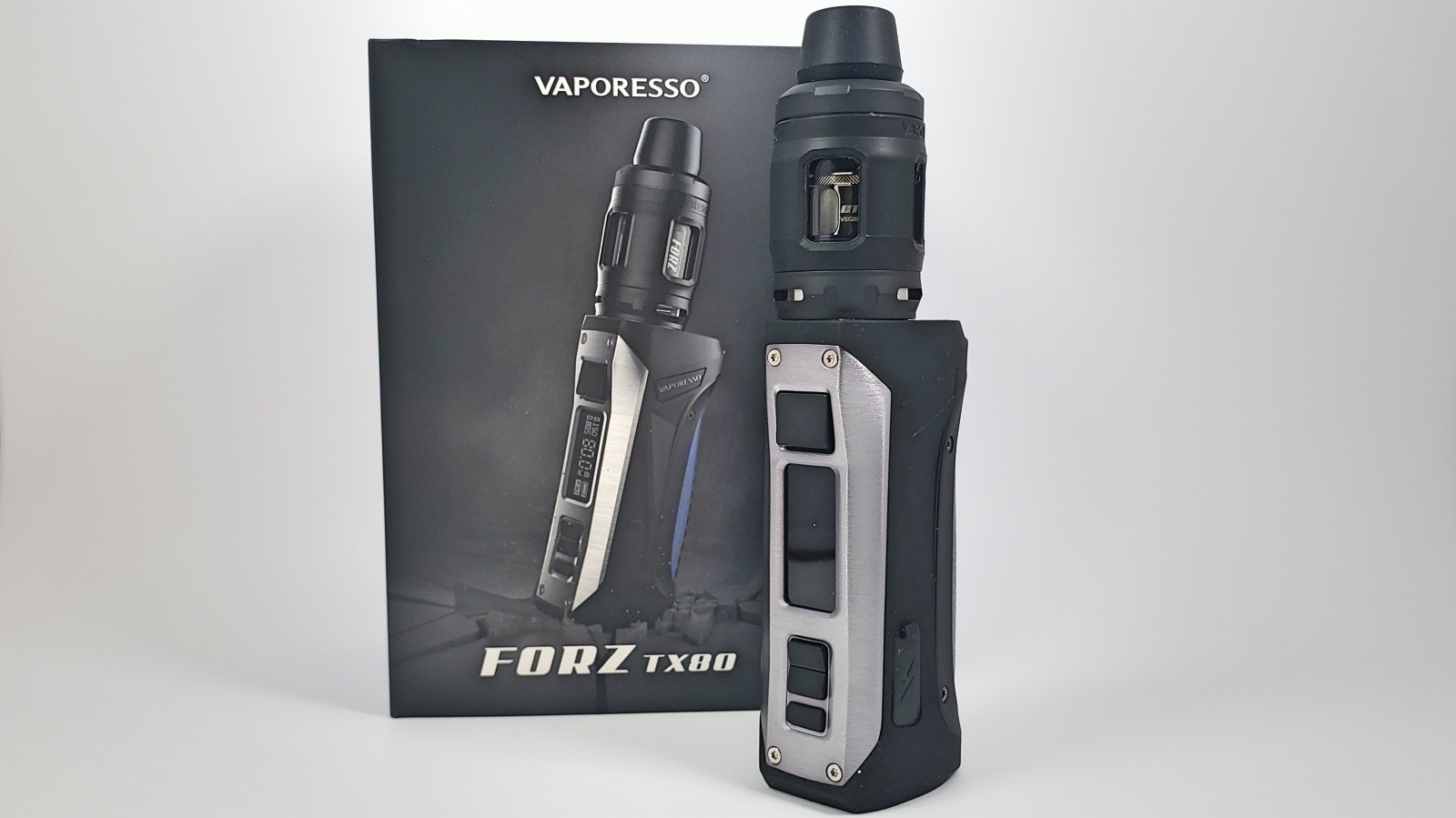 The Forz TX80 was sent to me for review from Vaporesso. This is a single-battery device designed for durability and is Vaporesso’s direct attempt at competing with Geekvape in many different ways. 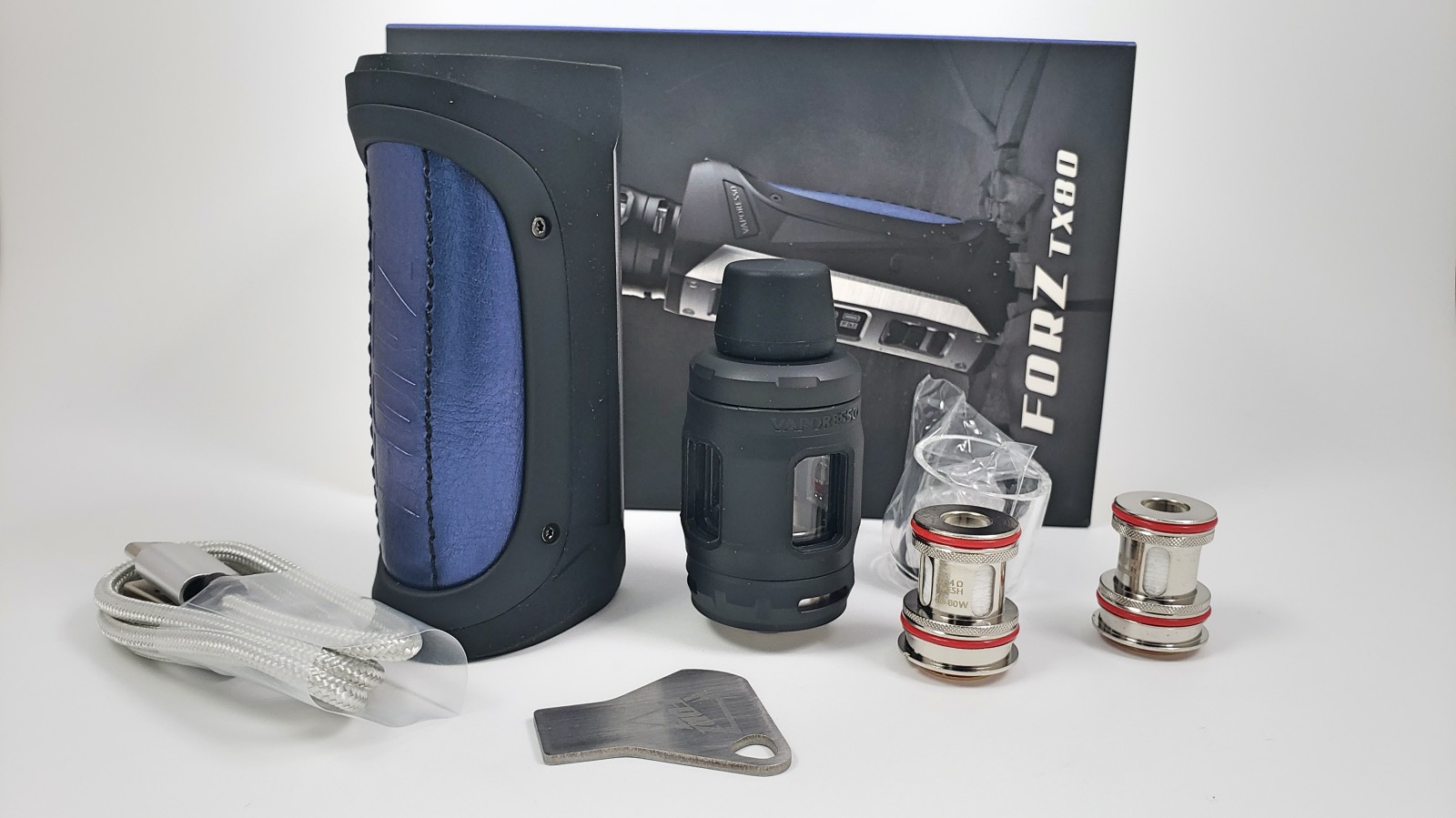 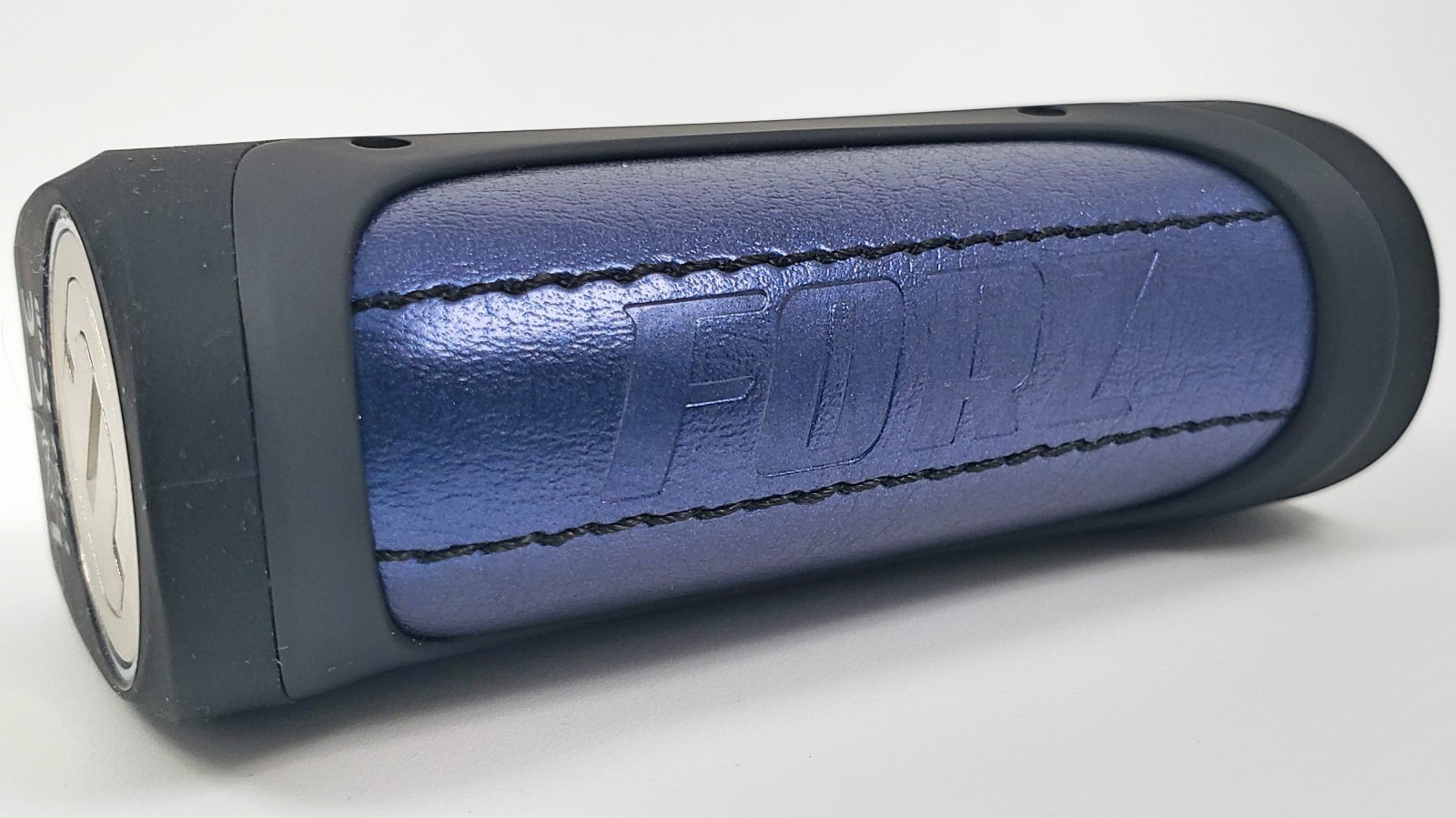 I can’t help but compare this to any of Geekvape’s smaller devices like the Aegis Solo. It’s pretty clear that’s what inspired the Forz. It has a very similar style and size. If this didn’t say Vaporesso on it, you’d think this was made by Geekvape.

And like Geekvape’s products, it’s also waterproof, shock-proof, and dustproof. Vaporesso says that their marketing research shows that 64% of vapers are worried about their devices breaking from being dropped for or from water damage. I don’t know if that’s why they developed this device, but it’s a fun statistic nonetheless.

The device has reinforced screws and has a high-strength zink alloy bracket over the frame for more protection.

On the front of the device is a power button, a 0.69” OLED screen, and up and down button, and a mode button. On the bottom is the battery cap and on the side is a Type-C USB port.

The Forz TX80 uses Vaporesso’s excellent Axon 2.0 chip. They’ve been using this one in all of their latest devices and it’s a great chip. It fires extremely fast and has a ton of features. The chip also has a new upgrade called F(t) mode. If I’m understanding their website correctly, this mode increases the output voltage and controls the heat efficiently based on how long you fire the device. And it works in temperature control mode too. It sounds like an upgraded version of pulse mode.

Fives clicks turns the device on and off. 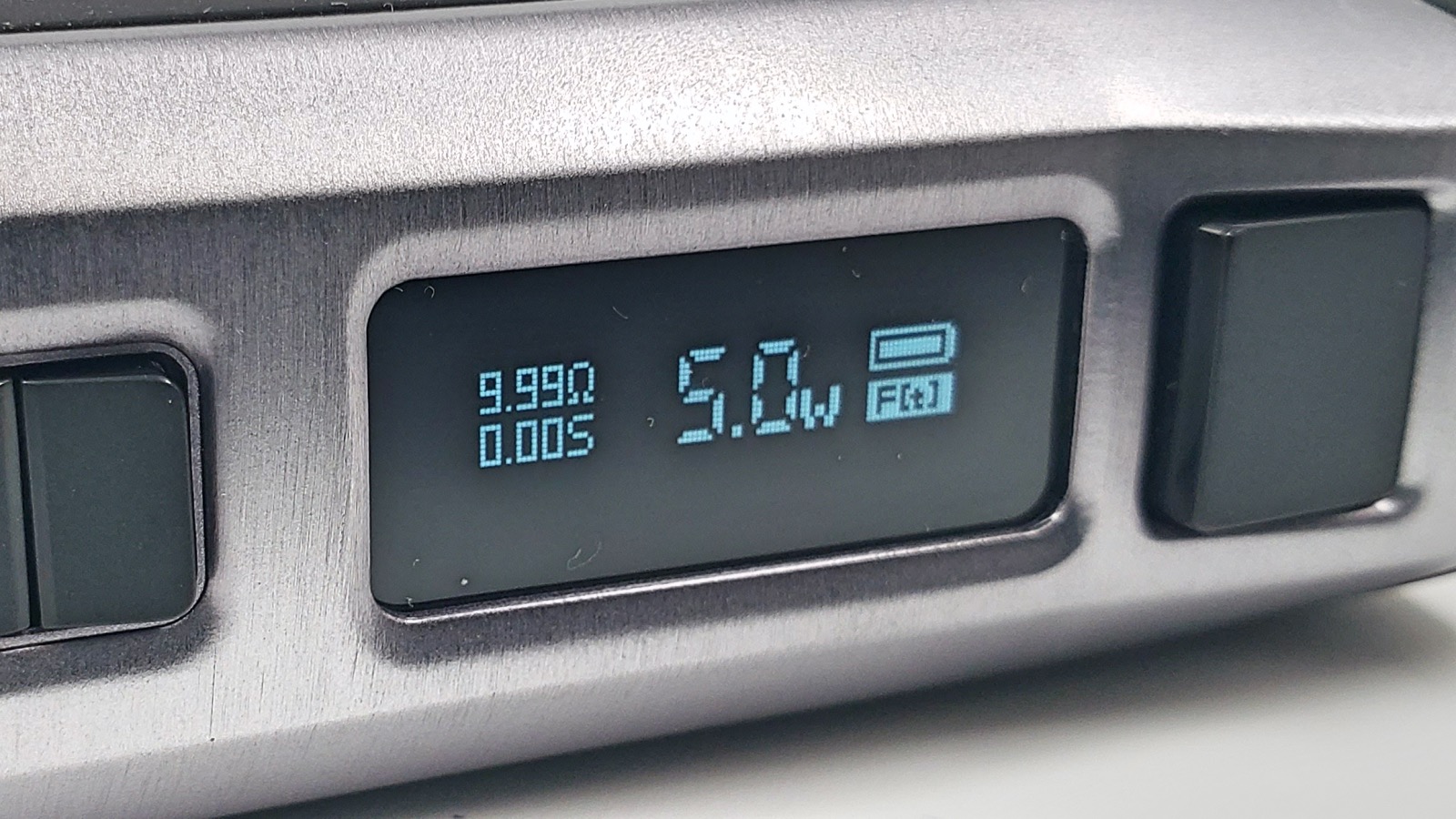 The wattage changes in 5-watt increments, which I personally like. It makes adjustments much faster. The only complaint I have here is that it doesn’t round-robin from the max wattage over to the lowest wattage and vice versa from the lowest wattage to high.

The settings menu lets you adjust several settings such as: 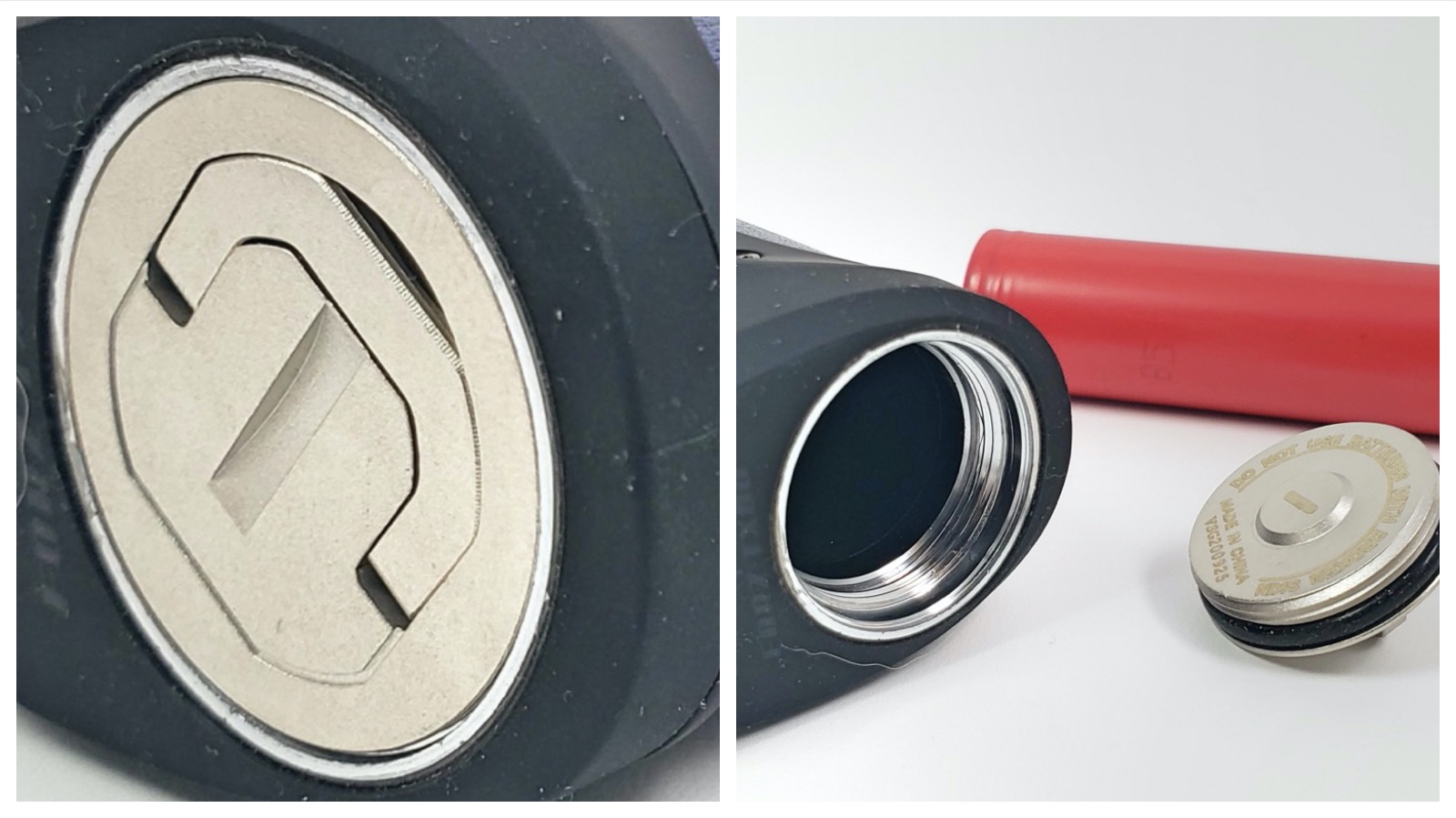 The Forz TX80 uses a single replaceable 18650 battery, which you insert by unscrewing the cap at the bottom of the device. The battery cap is heavy duty and seals the tank off from water and dust. Taking the battery cap for the first time was really tough but once it was off I didn’t have any more problems. 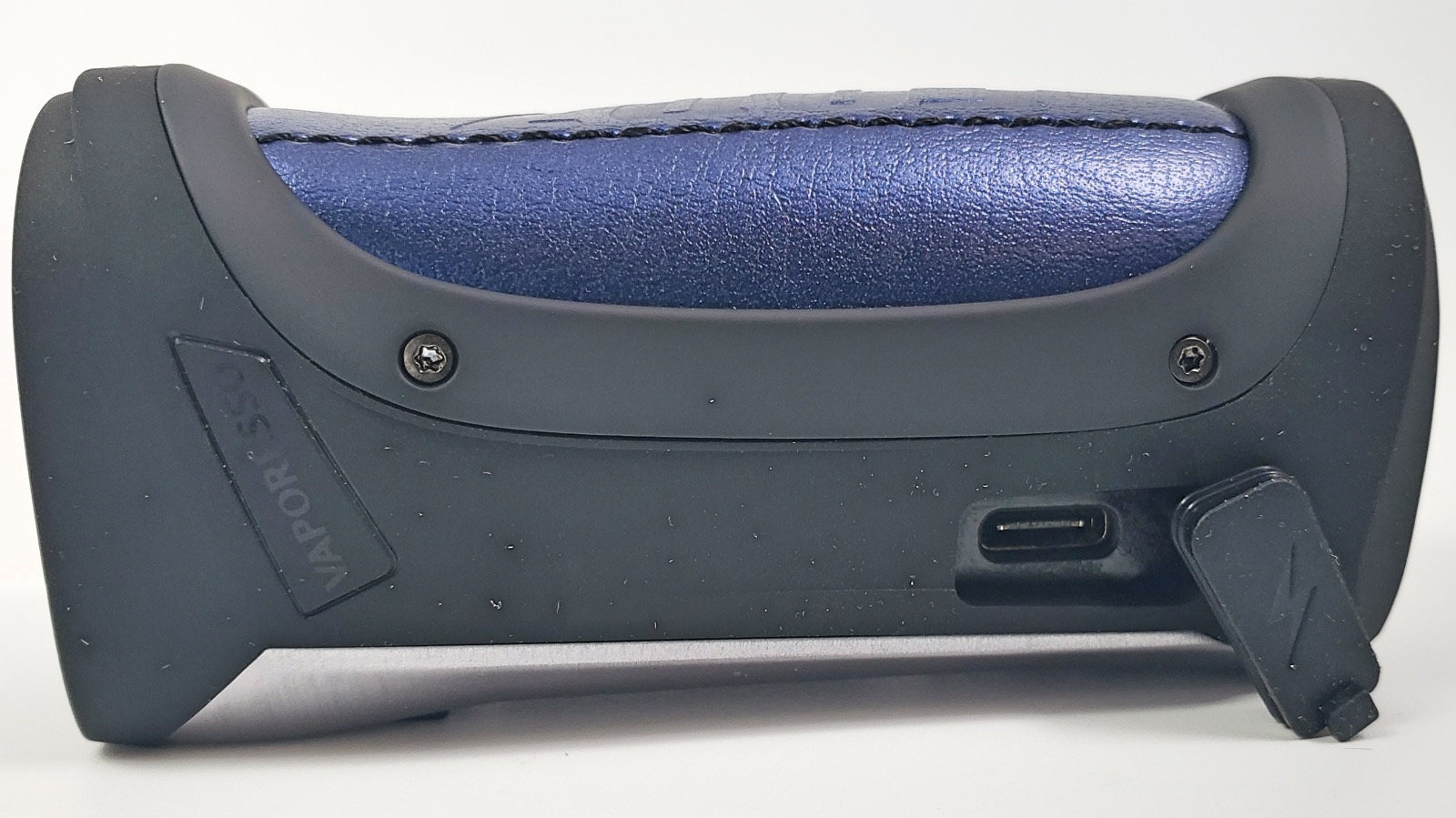 Another great thing to see on the Forz TX80 is that Vaporesso is finally starting to switch to type-C USB cables. So if you want to charge the battery while it’s in the device, it’ll charge fast.

The Forz kit also comes with the new 25mm Forz tank. It wouldn’t make sense to have such a durable mod without a tank that can handle the same thing right? So that’s what Vaporesso did with the Forz tank.

The tank uses fiberglass plastics and high-tenacity soft-rubber to give the tank a double layer of protection. 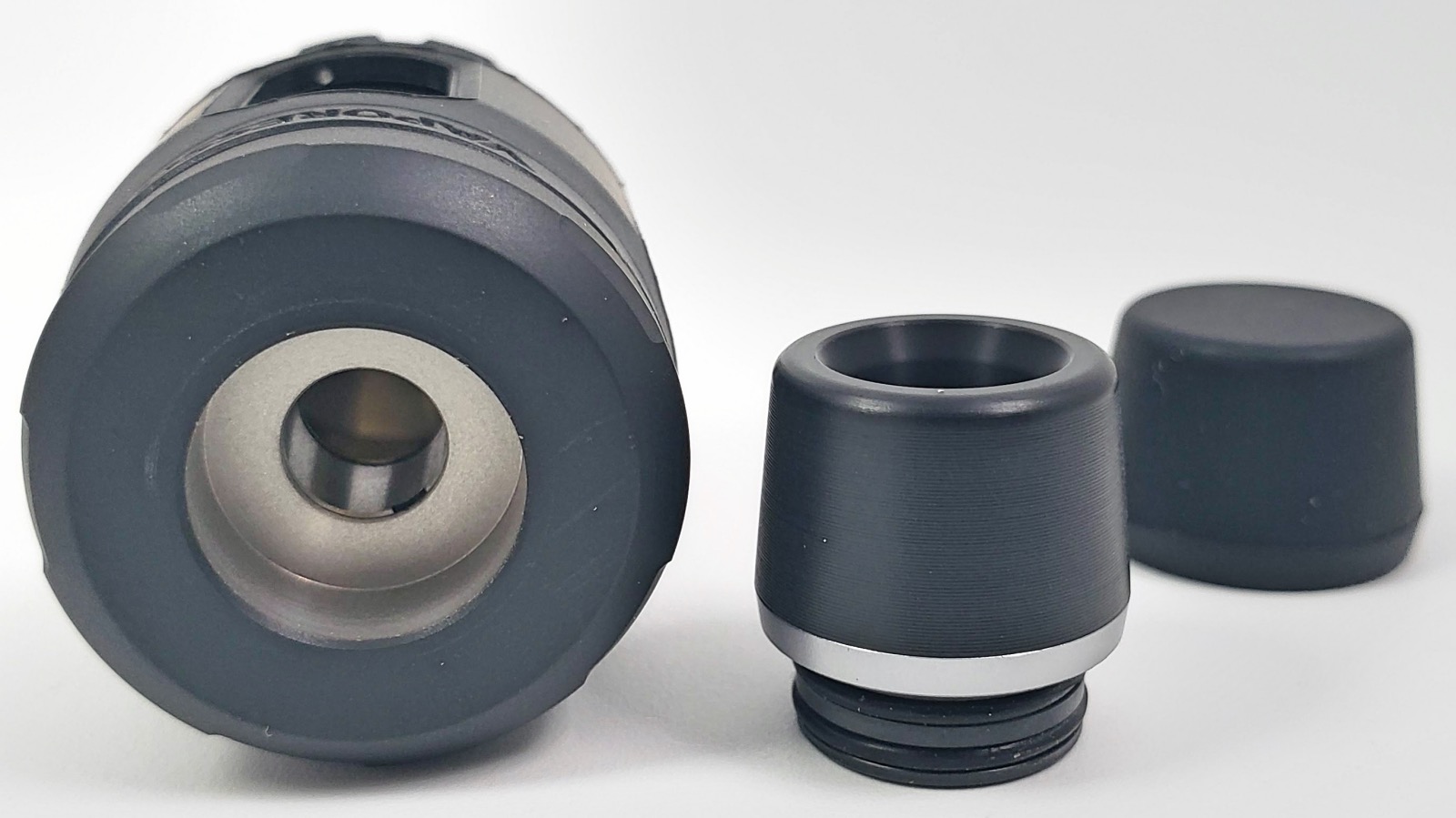 At the top of the tank is a removable drip tip. 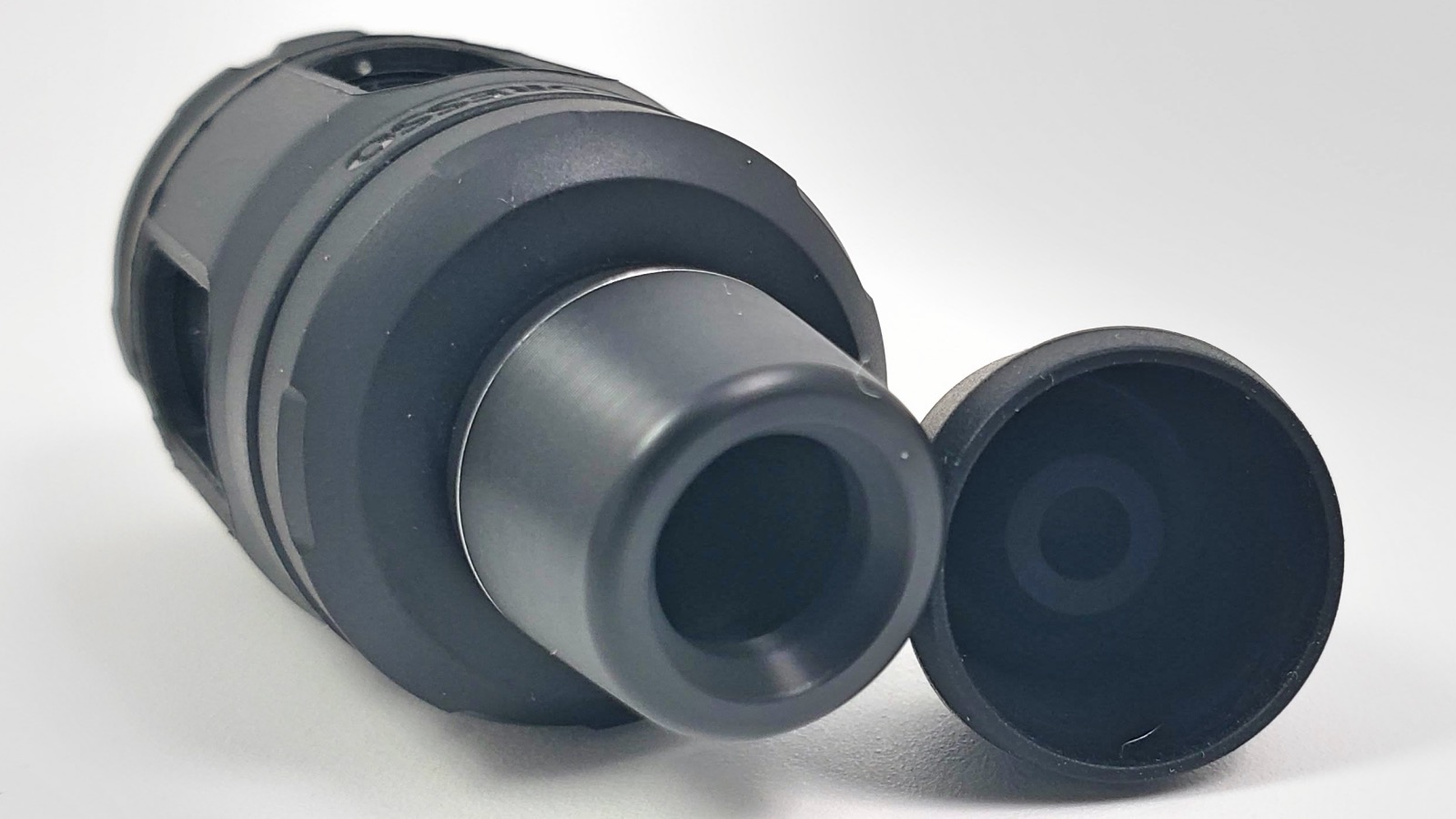 Vaporesso also includes a silicone drip tip cover if you want to prevent anything from getting into the tank which is nice. 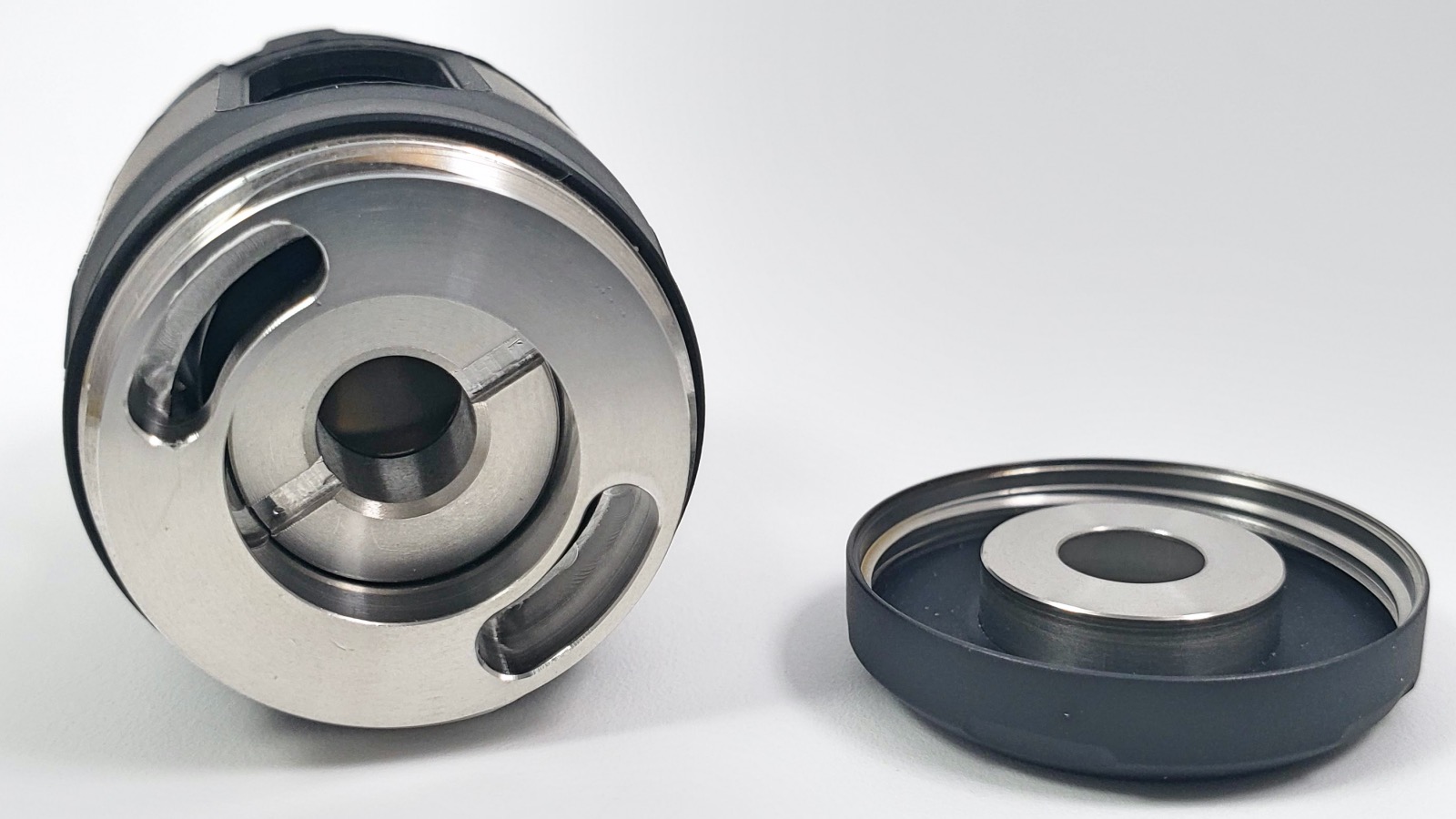 The top cap unscrews from the tank to give you access to the fill ports. It’s a really thin cap so it doesn’t feel very high quality but that doesn’t mean it isn’t. I don’t really know. It’s just something I noticed. 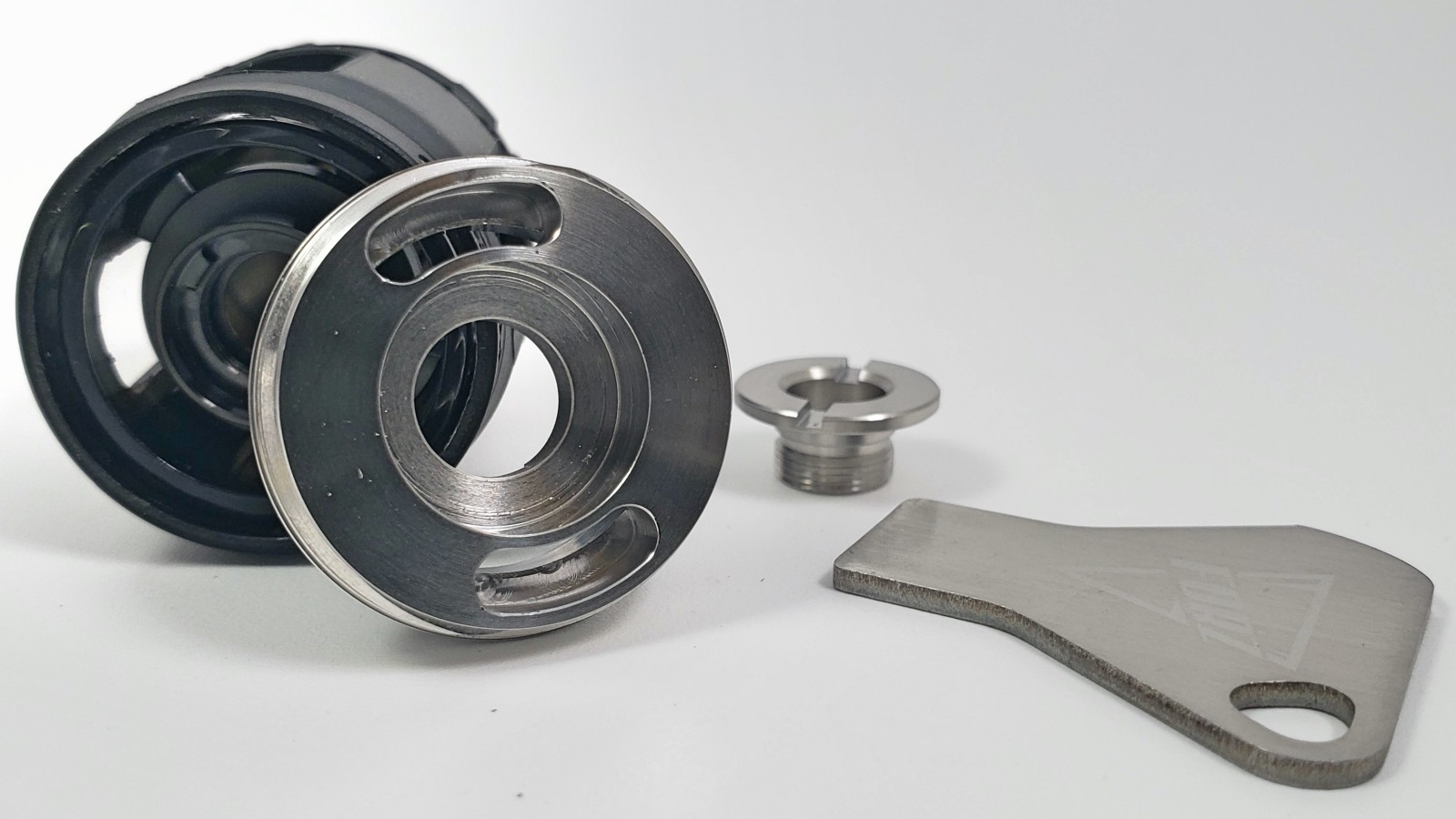 Then under the top cap at the top of the chimney section is a bracket lock. If you want to take the tank apart, you need to unscrew this lock. I had a heck of a time trying to get the glass out of the tank frame but I could feel the glass moving around so I’m sure I could have gotten it out eventually but I decided not to keep trying out of fear of breaking the glass. But if you do need to replace the glass, that’s how you’ll do it.

The tank section consists of a glass tube protected by an outer rubber shell. You plug the coils into the bottom of the tank where they are press-fit. Then you screw the base on.

Base Section and Airflow Control 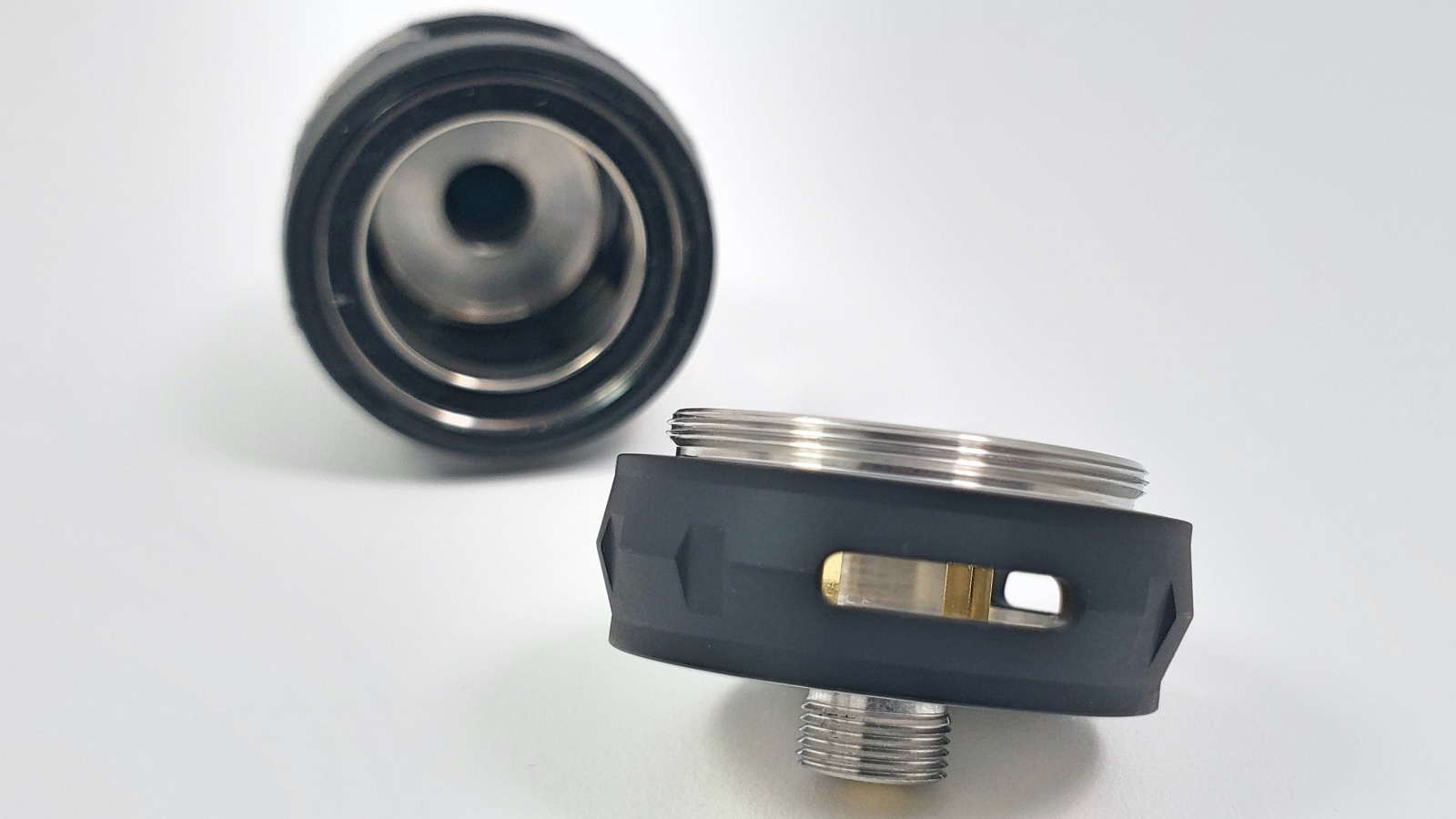 The threading on the base section seemed to be machined poorly. It sounds really crunchy as it gets tighter on the tank and it’s just as crunchy taking it off. I don’t know if that will happen with all of these tanks, but it happened on mine.

The base of the tank is where the airflow control ring is. The ring turns nice and smooth and stops in either direction. There are three big airflow slots to pull the air in. 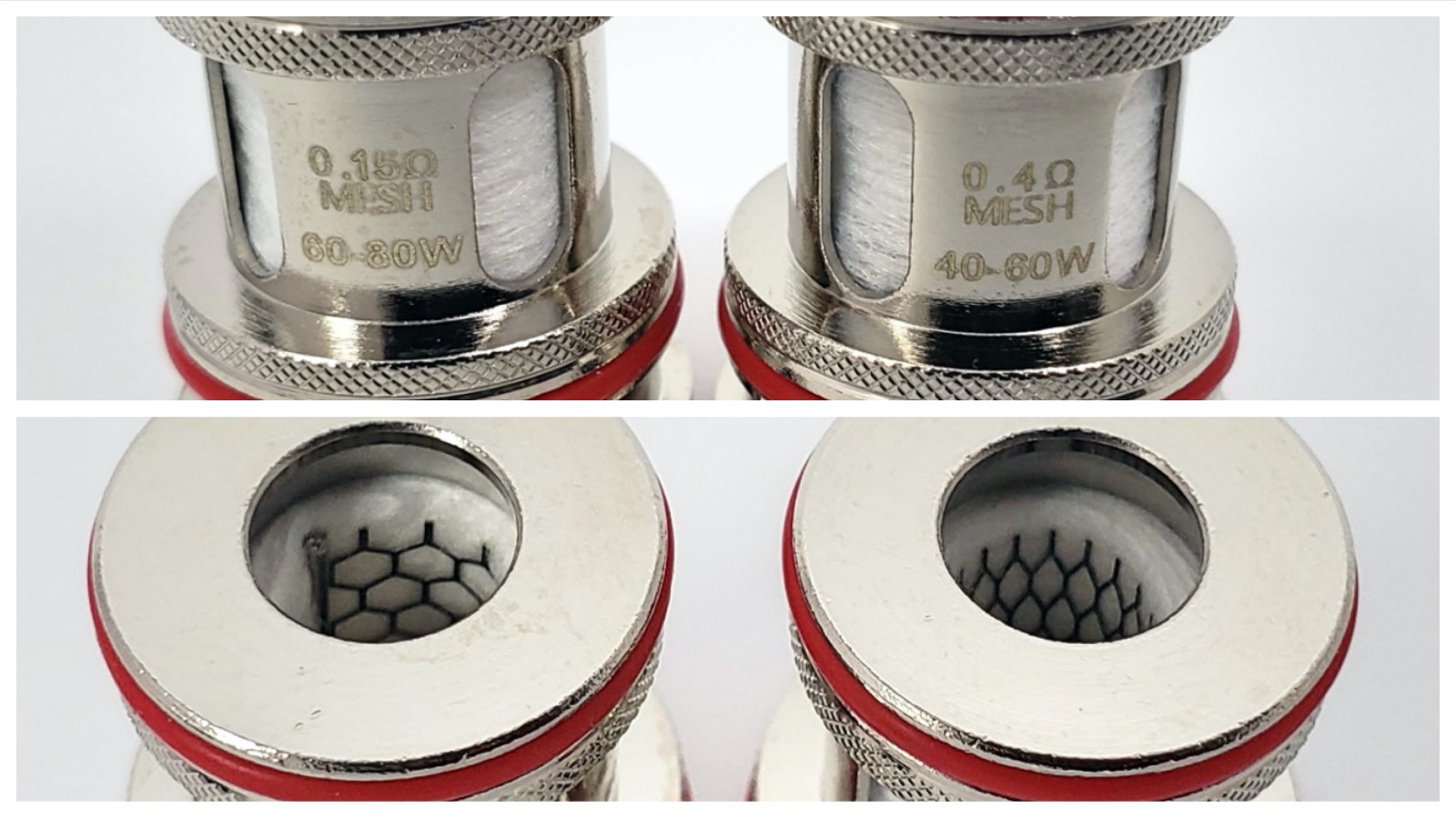 The coils used in the Forz tank are Vaporesso’s line of GTR coils. This is a completely new line of coils from Vaporesso that uses anti-bacteria organic cotton, larger space through the airway, and is supposed to be more leak proof than Vaporesso’s other coils. Vaporesso’s coils don’t usually have problems with leaking anyway so it’s good to see Vaporesso continuing to improve on good coils. 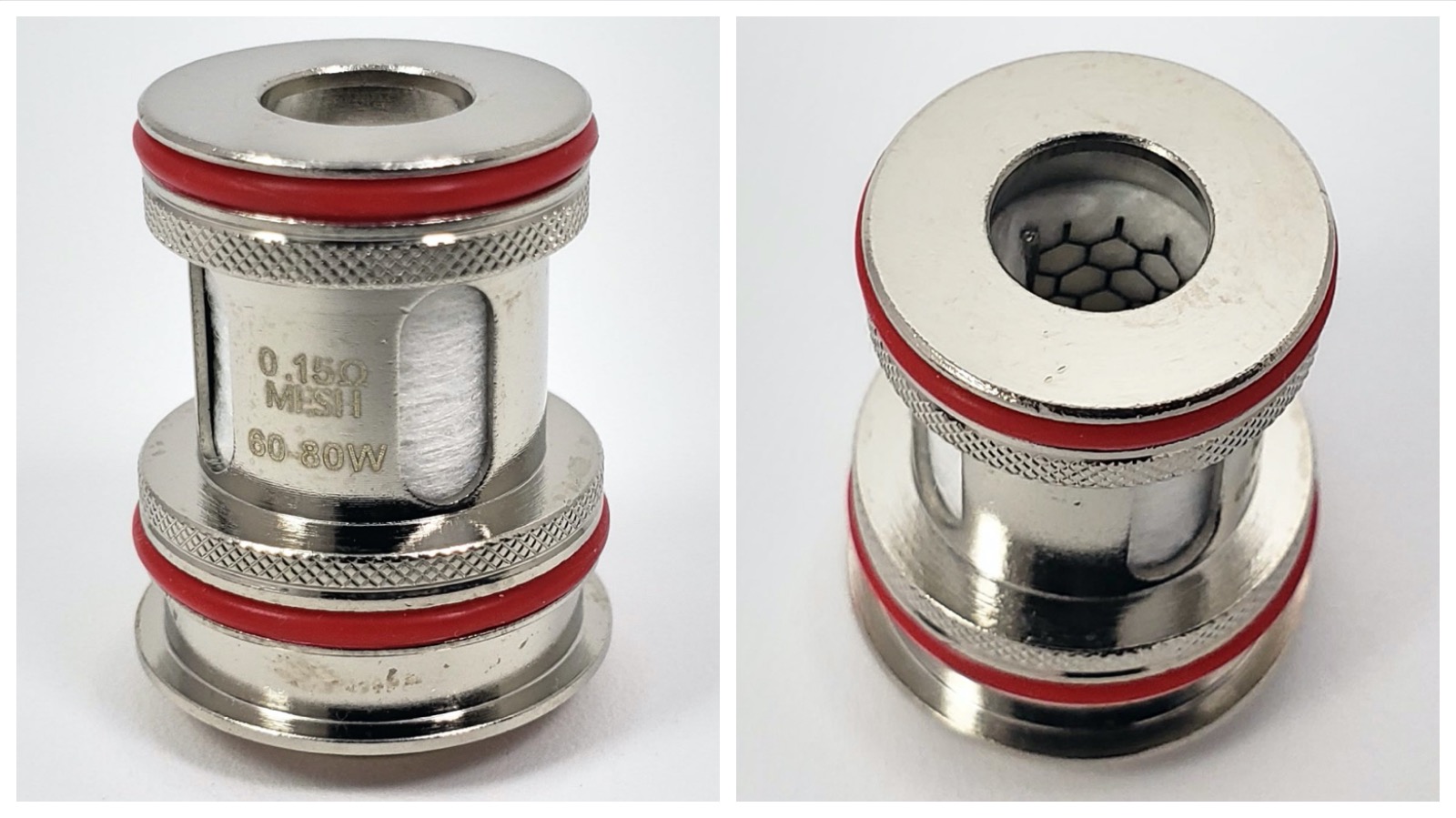 This coil is rated for 60-80 watts. The taste is very good at 60 watts and even better at 80. The flavor is really good. I’m impressed with the flavor production. My sweet liquids were almost too sweet, it’s that good. And at 80 watts there’s no issue with dry hits. It wicks fast and really well. 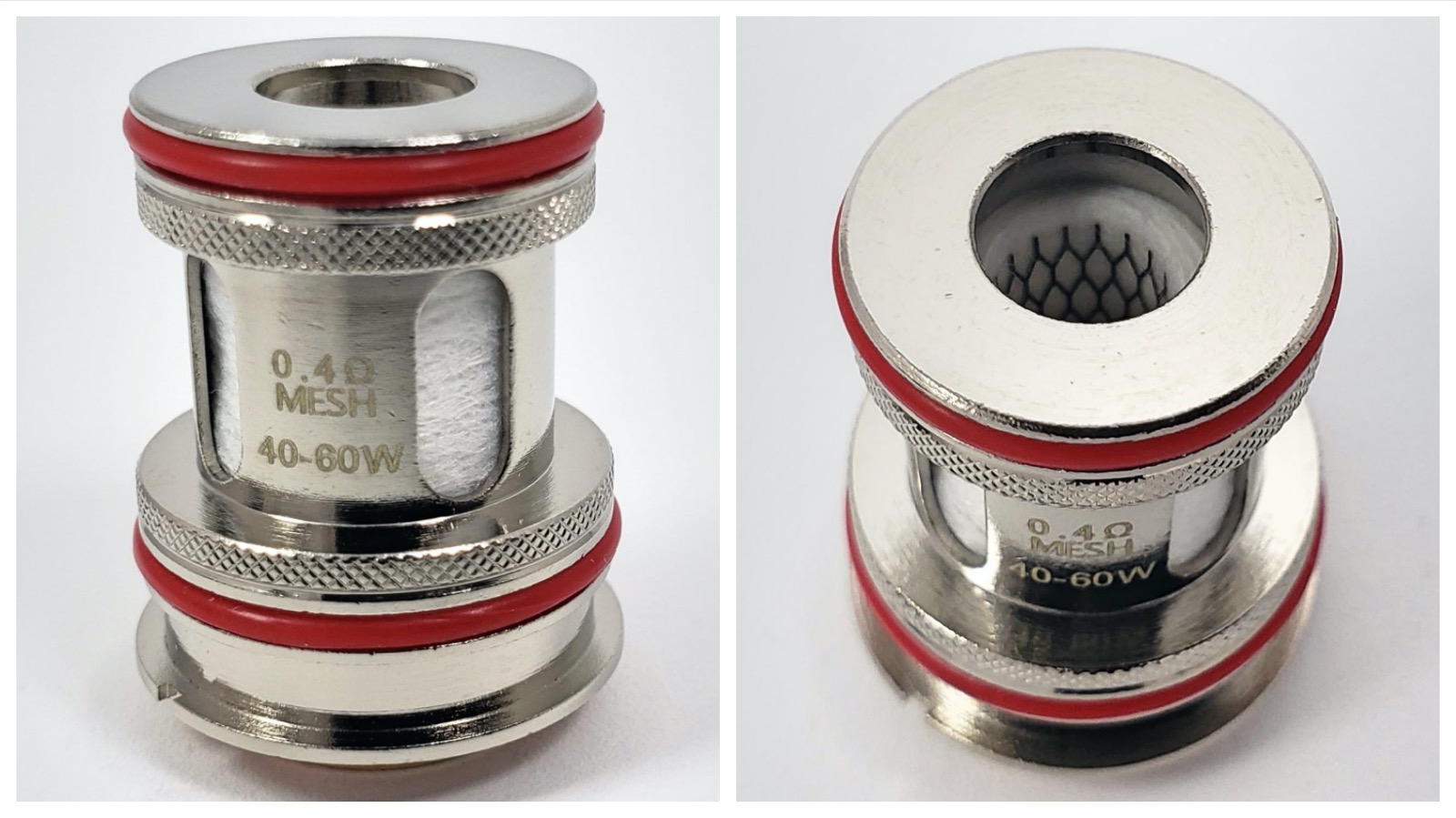 There’s one more part of the kit worth mentioning, which is the Forz TX80 RDA. This didn’t come with the kit, so I can’t tell you much about it, but all I can say is that I’m so happy to see a big name vape company releasing a new RDA. With so many pod systems out these days, it’s refreshing to see an RDA.

Just to give some quite details on the RDA, it has honeycomb airflow and has four posts built in a design similar to the t-shape or y-shape of Heathen’s Dead Rabbit style decks. It’s a nice looking RDA. 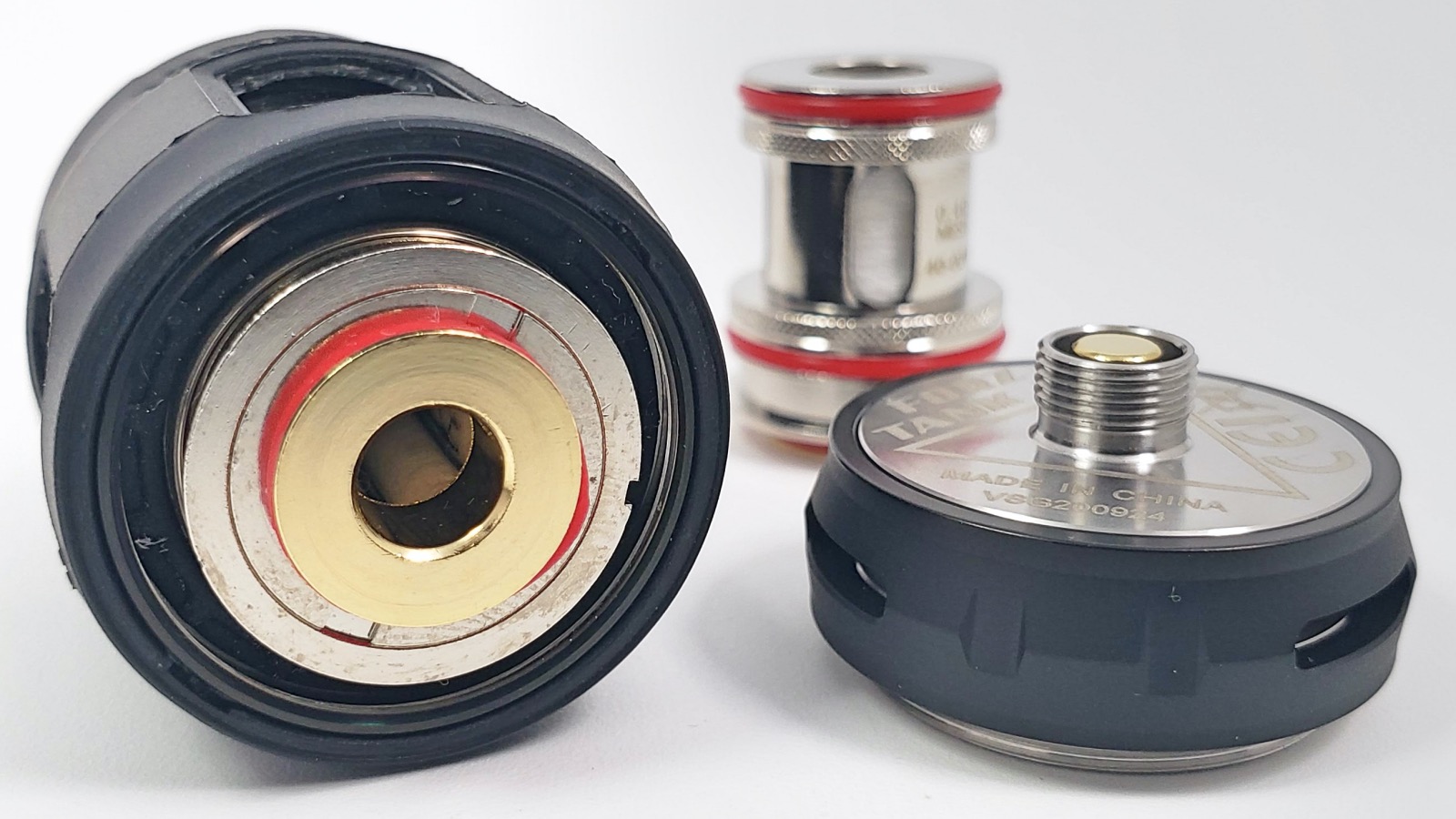 Installing coils is super easy. Just plug them into the chimney section and screw everything back together. 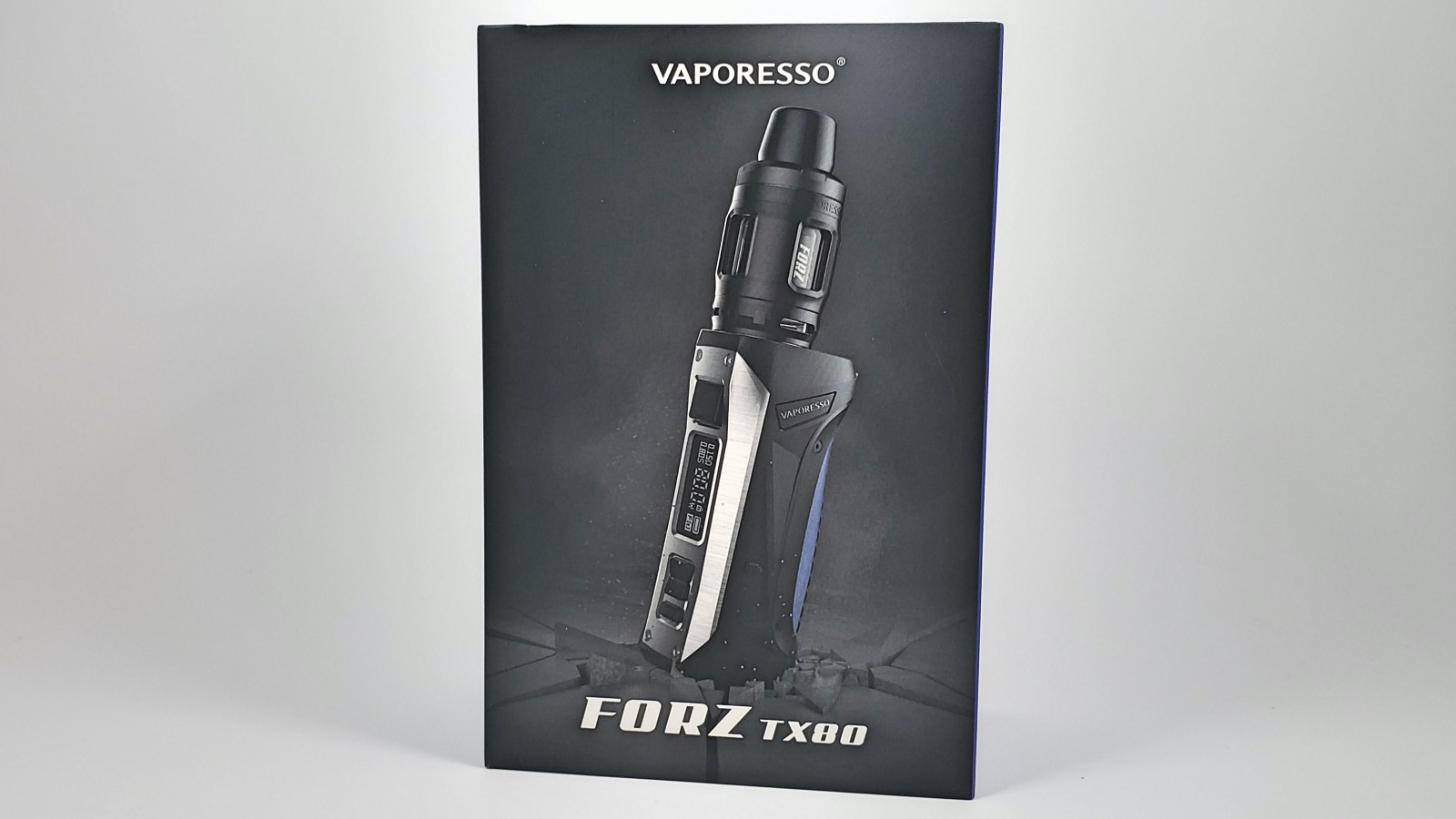 The Forz TX80 is a great device. It’s pretty much Vaporesso’s take on Geekvape’s Aegis line. It looks just like the Aegis, it’s waterproof, shockproof, and dustproof – at least to some degree – and it has a lot of features on the chip. It’s a very nice device. As far as the tank goes, I like it and it works great. The flavor is excellent, it’s durable, and it has good airflow. My main complaint with it is that it’s designed for higher wattage and while the TX80 can vape at 80 watts and run the tank just fine, the device uses only a single battery so if you vape the tank at its max, the battery will need to be charged all the time. I would have liked for Vaporesso to release a tank more fitting for lower wattages, such as something that would work great at 25-30 watts. But the tank really is awesome.

The Forz TX80 was sent to me for review from Vaporesso and you can get it from them for $69.90.