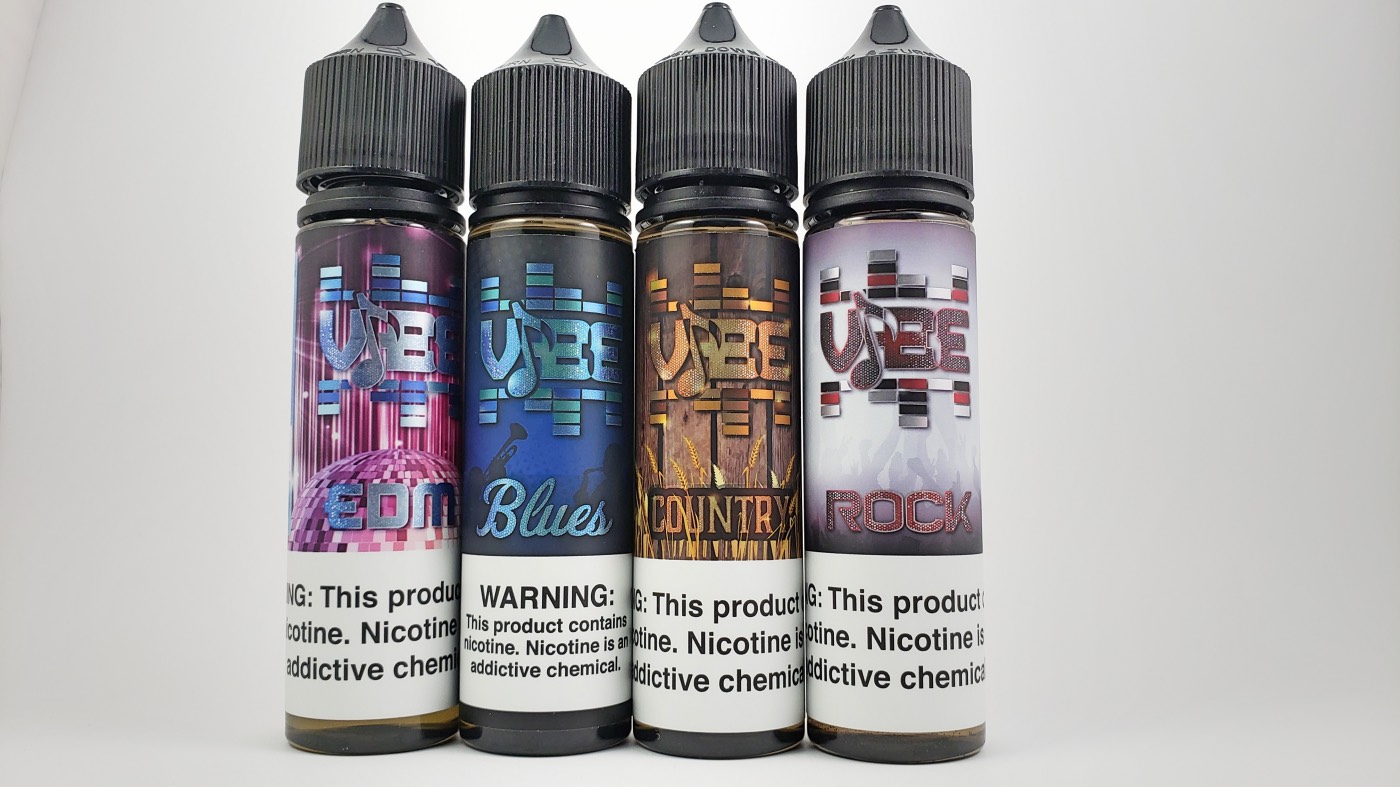 Vape Craft Inc. was kind enough to send me their Vibe line for review. There are five flavors in all, but I didn’t get their “Hip Hop” flavor.

All of their flavors are named after music genres

If you’re interested, go check out the full Vibe line at VapeCraftInc.com

All of the flavors have the same specs:

It smells amazing. Like a cherry soda with that carbonated fizzy citrusy soda. That smells really good.

It reminds me of a cherry-cola, but it ends with a subtle lemon-lime sparkling water flavor. It’s a really interesting combination and I like it.

If you have ever tried an e-juice that tries to get that fizzy sparkly soda taste, you know that nobody really gets it just right, and that’s still the case here. I just don’t think it’s possible. You can taste a hint of what seems ALMOST like a sparkling mouth sensation.

Like most of Vape Craft Inc.’s flavors, it’s a light and mild flavor. It’s not overly sweetened, but it does have some sweetener.

Get “EDM” at VapeCraftInc.com (affiliate)

They describe this ejuice as the fruit flavor that will have you thinking about summer and some good country jams.

It smells fruity, but I don’t know exactly what type of fruit.

Now, this is funny because this is the only flavor in this line that isn’t really described on the product page, so I had to take a guess.

Based on that smell, here is exactly what I wrote down in my notes…

“My guess is raspberry or strawberry, and maybe even peach.”

Ok, so what most people probably wouldn’t think of, but because of what I do for a living, I decided to check the code of the page. And guess what, in the code, you’ll see that it’s a strawberry-peach gummy candy. Boom! Minus the raspberry, I nailed it!

This combination of flavors is super weird, but it’s not bad.

I can taste the peach and gummy very well, with just a light hint of strawberry. I think it’s that peach that gives it that unique taste. It’s like a peach gummy ring. Not like the standalone gummy flavor that a lot of e-juice companies use. To me, it’s mostly a peach ring flavor, but that strawberry is in there. I like it.

This is a lighter flavor and not extremely sweet, so good for those of you who like those types of e-juices.

Get “Country” at VapeCraftInc.com (affiliate)

They describe this ejuice as a decadent dessert that will delight your taste buds with crisp apple and a delicious hint of cinnamon.

The first smell that comes right out is the cinnamon, which is followed by a light hint of apple.

Based on the smell I thought this was going to be mostly a cinnamon vape, but it really reminds more of an apple pie. It’s like the apple pie filling with a little bit of cinnamon mixed in. This is one of the sweeter e-juices I’ve had from Vape Craft Inc. and the flavor comes out nice and strong.

Get “Blues” at VapeCraftInc.com (affiliate)

They describe this ejuice as an award-winning sour blue raspberry gummy that will rock your socks off.

It smells like a really good blue raspberry flavor. One thing that worries me though is that it smells like strong fruity flavor, and while I like fruity flavors, they tend to irritate my throat if they’re strong. If any of you have the same the problem, then you know what I mean. This seems like one of those flavors. But it sure smells good.

Ok, so good news. This isn’t one of those fruity flavors that messes up my throat. It’s actually really smooth. It’s basically a nice light blue raspberry flavor. I don’t really get the sourness or gummy flavor they mention though. Overall, it’s a mild blue raspberry with a little sweetness.

Get “Rock” at VapeCraftInc.com (affiliate)