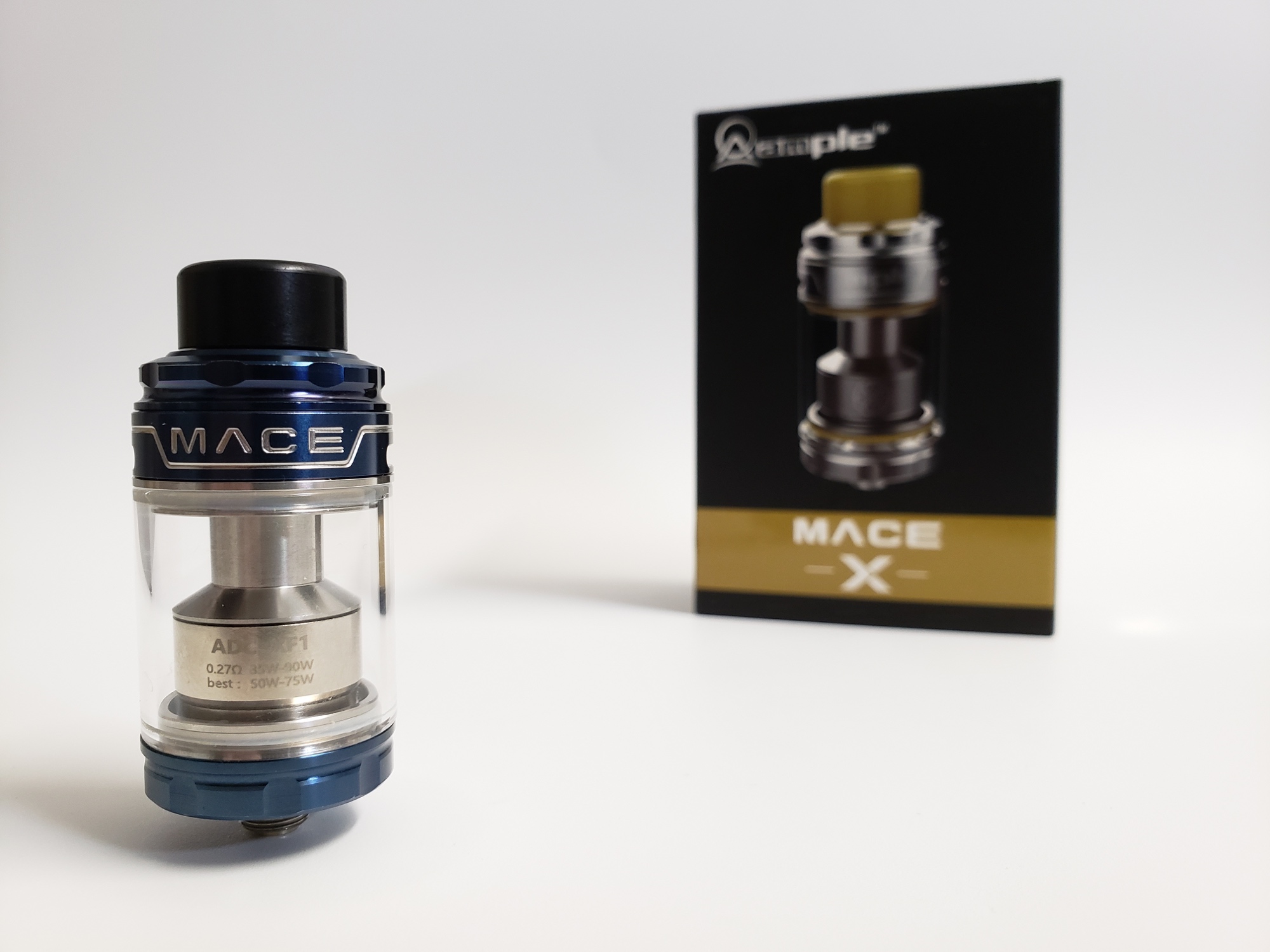 The Mace-X subohm tank (affiliate) comes from a company named Ample and I received this for review from HeavenGifts.com. I’ve never heard of Ample before so I wasn’t sure what I was getting into with this one, but it actually ended up being a really nice tank. So let’s talk about it!

The tank looks nice. I like the dark blue color and I like how it all looks pre-configured. While we’re talking about that, I want to mention that the yellow o-rings that came preinstalled actually got stuck inside the glass tank and ripped when I took them out. So that really annoyed me because I liked the yellow accents. Without the yellow o-rings though, it just didn’t match well to me, so I swapped them out. It still looks good, but that really sucks. You also get two glass tubes. The bubble glass holds 5.7ml of e-juice and the straight glass holds 3.7ml. The fill ports are big and easy to access, so nothing else to mention about that. This is a top airflow tank, which prevents leaking. There are two wide airflow slots, one on each side. The airflow control ring moves really smoothly and it spins freely in both directions without stopping. There’s a lot of airflow here too, if you want it, which is great because the included coils can run up to 90 watts. But the coils are rated to run well as low as 35 watts and you can shut down the airflow just fine to cater to that too.

Now here’s one of the biggest pros about this tank. The airflow is buttery smooth. It’s so smooth that I just love taking hits off of this tank. It’s the first thing I noticed when I first used it. These new coils are pretty unique. Ample calls them disc-shaped. They remind me sort of like a stove burner or for some of you older folks, a car cigarette lighter.

They are rated between 35-90 watts, but Ample says they work best between 50-75 watts. Of course, I ran them at the max 90 watts and hit after hit, they work great. Very good flavor and no dry hits. These coils work really well and the flavor is very good. It’s so good that a couple days later I forgot what type of coils they were and I thought they were mesh coils. It’s probably not just the coils getting all the flavor, but I’m sure it helps. The replacement coils cost about $12 for a pack of three. That’s really all there is to it.

I have only one con, and it’s that the yellow o-rings got stuck inside the glass tank and tore.

But other than that, it’s a great tank. It’s easy to fill and use. It can open up to provide lots of airflow, the coils work great at their max of 90 watts, and the tank has very good flavor production.

You can get it from HeavenGifts.com for $37 if you’re interested.