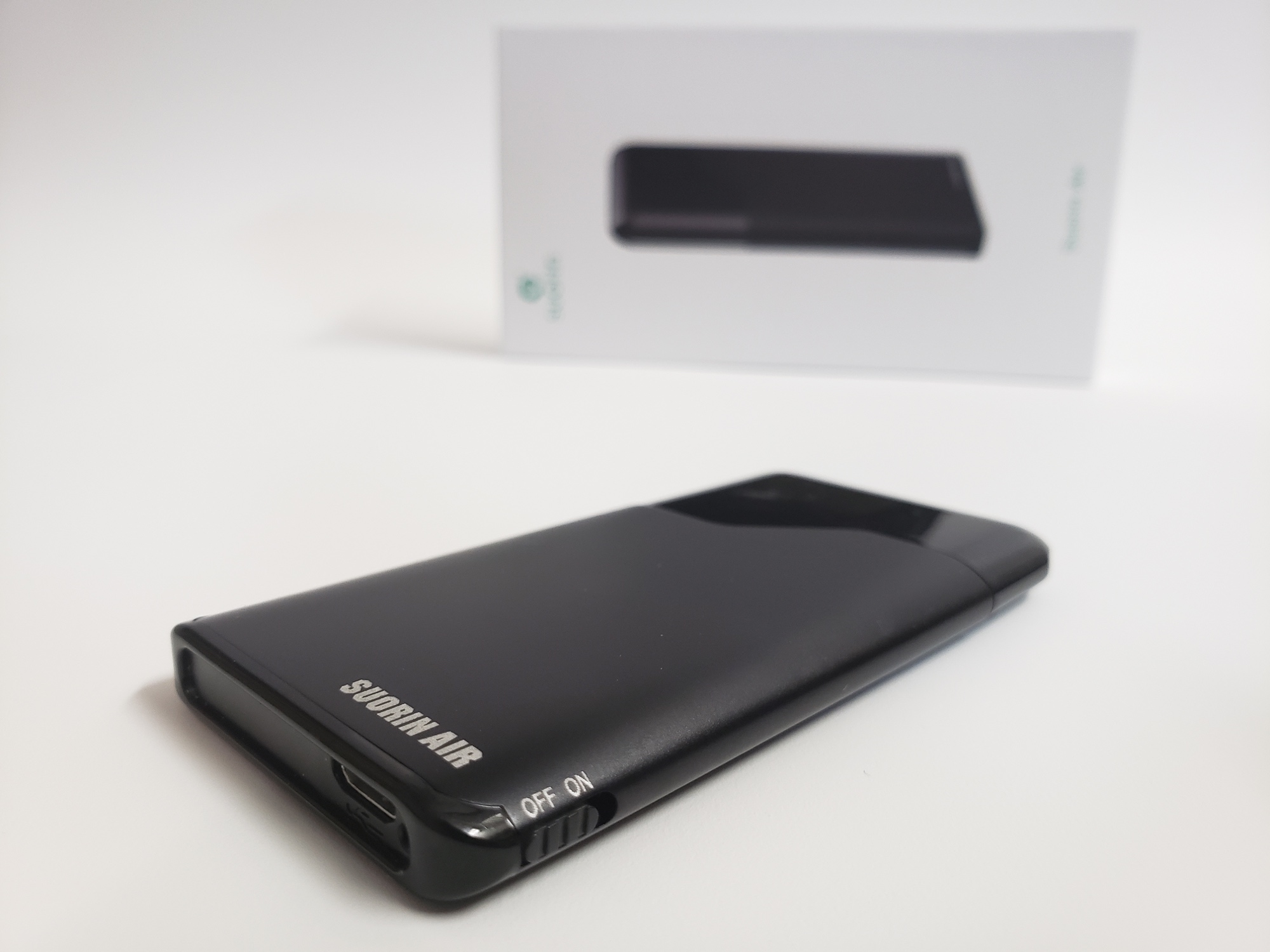 The Suorin Air was sent to me for review from BuyBest.com. This is a beautiful pod device that’s flat and fits nicely just about anywhere. Before we go any further, I want to point out that there are two versions of the Suorin Air, but Suorin never branded the v2 as a new version. The original came out in early 2017 so at this point, if you buy one you’ll probably get the V2 since most of the early models are probably off the shelves by now, but to be sure, here are the differences.

There are other slight differences from what I’ve read, but those are the biggest tell-tale signs. Mainly it seems like Suorin just made some improvements to the original device, for example, people say the pods with the V2 are much less likely to dry hit. Right out of the box, this just looks really sleek. It’s a really nice looking device. Suorin describes it as a credit card sized vape, and I can see the comparison. It’s actually smaller than a credit card, but of course, it’s thicker. It’s probably the width of about 3-4 credit cards. But it’s pretty flat, which is awesome because this just slides into my pocket and I barely even notice it. The pods cost about $5 each and they hold 2ml of e-juice. They’re designed to be used with all types of e-juice and consistencies. With devices like this though, high VG e-juices will be more likely to dry hit. To fill them up, just pull out the plug and fill it up. The fill hole is nice and big so it’s easy to fill too. And the plug is pretty long, so it holds tight and is also easy to fit in place. The pods fit very tightly into the device and there’s no worry of this falling out of place, so I like that. The battery is a 400mAh battery, so it’s a little small for a pod vape of this size, but I’ve found that the charge still lasts quite a while. It’s last longer than a day of good use for me anyway. To charge it, just plug in the micro USB and you’re good. It charges really fast in about 30 minutes, so that’s a big plus. There’s also an LED light on the bottom of the device that lights up when you fire it. Blue indicates a high power level and it turns red when the charge is low.

Draw Activated – The Suorin Air is draw activated, so it’s easy to use. Take a hit and turns on. On/Off Switch – There’s also an on/off switch, which is very unique for a pod device. I really like this feature because it prevents any concerns of auto-firing, which is a recurring problem with other pod vapes on the market. So it’s very cool that they added that. Airflow – The airflow is a little airy, but I’ve heard that there seems to be a quality-control issue with the pods. Sometimes they’re really restricted and sometimes they’re airy. The device only comes with one pod and the one I got is airy, so that’s all I know. If you get a tight pod, I’ve read that you can pop off the airflow section on the bottom of the pods. Anyway, on this pod, it’s really not designed for mouth-to-lung vaping. This pod really works best for restricted lung draws.

Flavor – The flavor from the pods is pretty good. It’s as good as any other good pod vape these days, most of which are really good and much better than the Juul if you’re wondering. Comfort and Use – Holding and using the Suorin Air is very comfortable. It’s small and fits nicely in the hand. The only complaint I have here is that at first, taking a hit from the corner of the device feels a little awkward. I got used to it over time, but it is a little strange. I’ve also found it hard to find the right side of the pod to take a hit from. A bunch of times I’ve tried taking a hit from the closed side of the pod, especially in a darker room. Ok, so that’s it for the Suorin Air. This is actually a very nice device. It looks awesome and I love the tiny size. It has good flavor and it hits very well. I also love that it has an on/off switch. And even though the battery is small, it lasts for a long time. The main thing to consider before buying it is that the airflow is airy, so it’s designed more for restricted lung draws.

So if you’re interested, BuyBest.com sells the Suorin Air for $20.50.