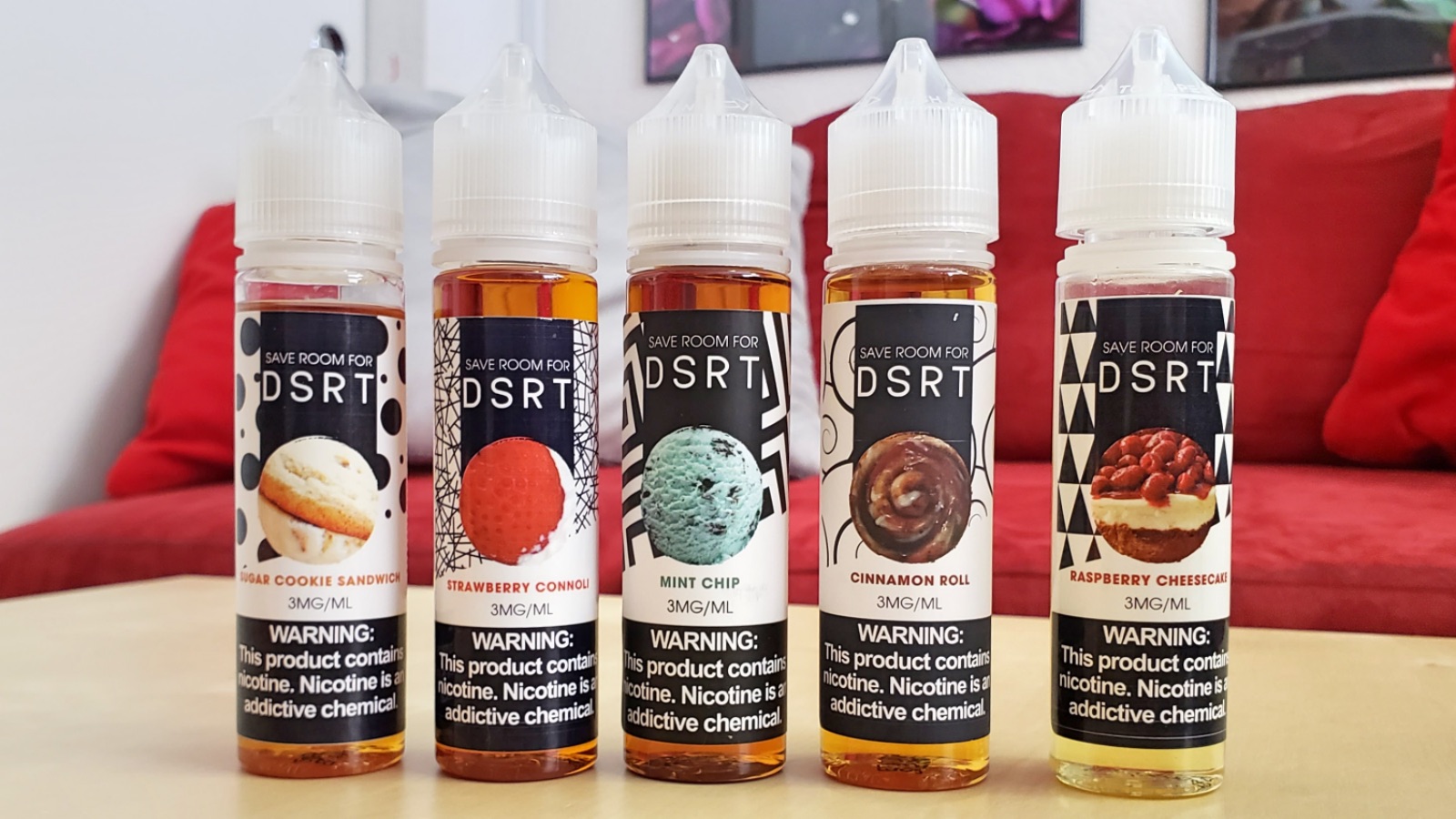 ApolloEcigs.co.uk sent me their DSRT, or dessert, line of e-juices for review. As the name implies, this is a liquid line based entirely on sweet desserts.

There are five flavors in this line: 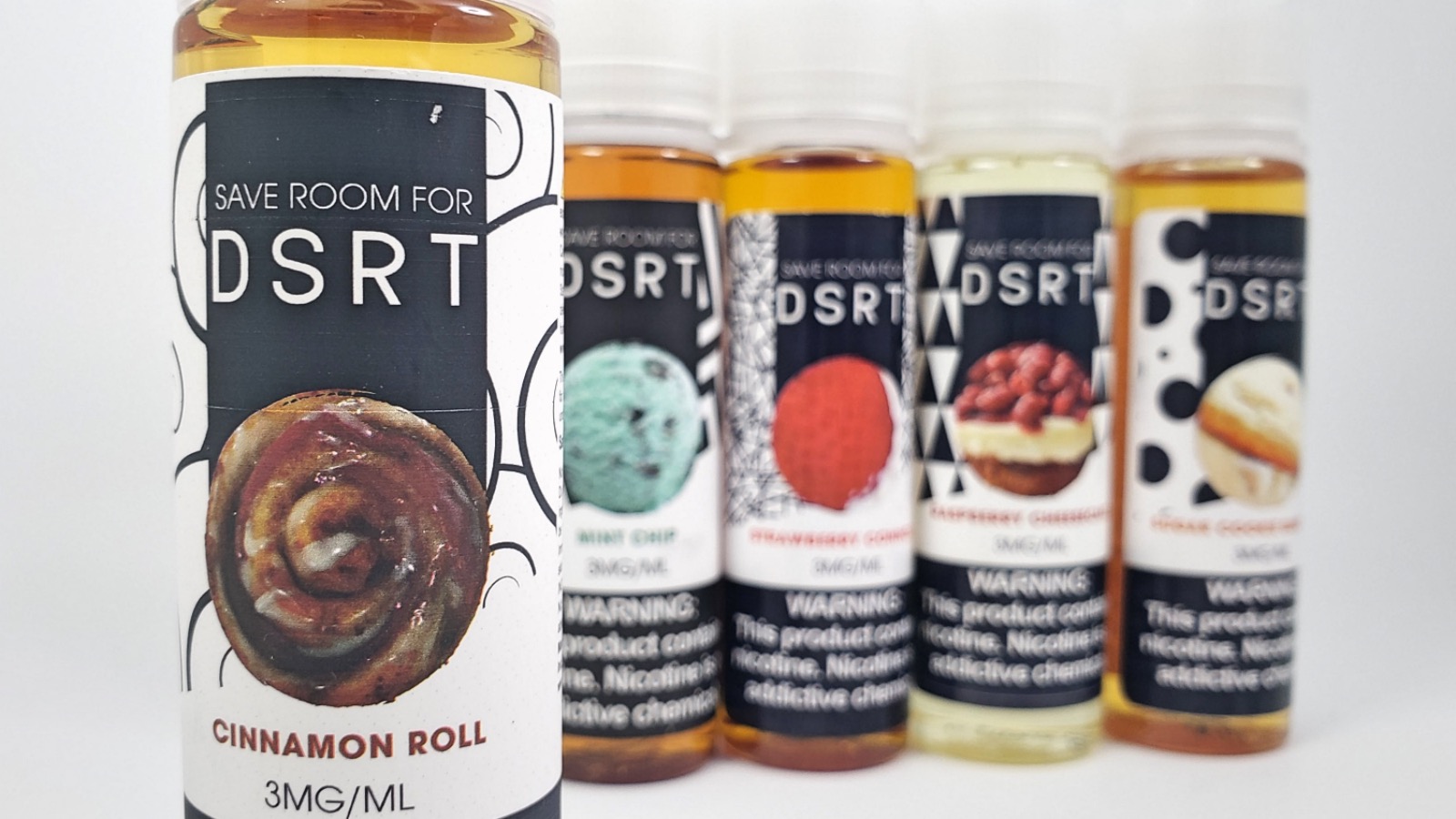 Apollo says that the flavor here is like a sweet glazed spicy cinnamon roll including pastry notes and icing.

Cinnamon roll e-liquid has always been a tough one for me because I can just never get all of the flavor notes. And this one is in the same. It does taste like a sweet cinnamon roll and I do think I get some of that icing flavor but I don’t really get the pastry notes. It is pretty good though. It’s a mild flavor which is probably a good thing for something like cinnamon. 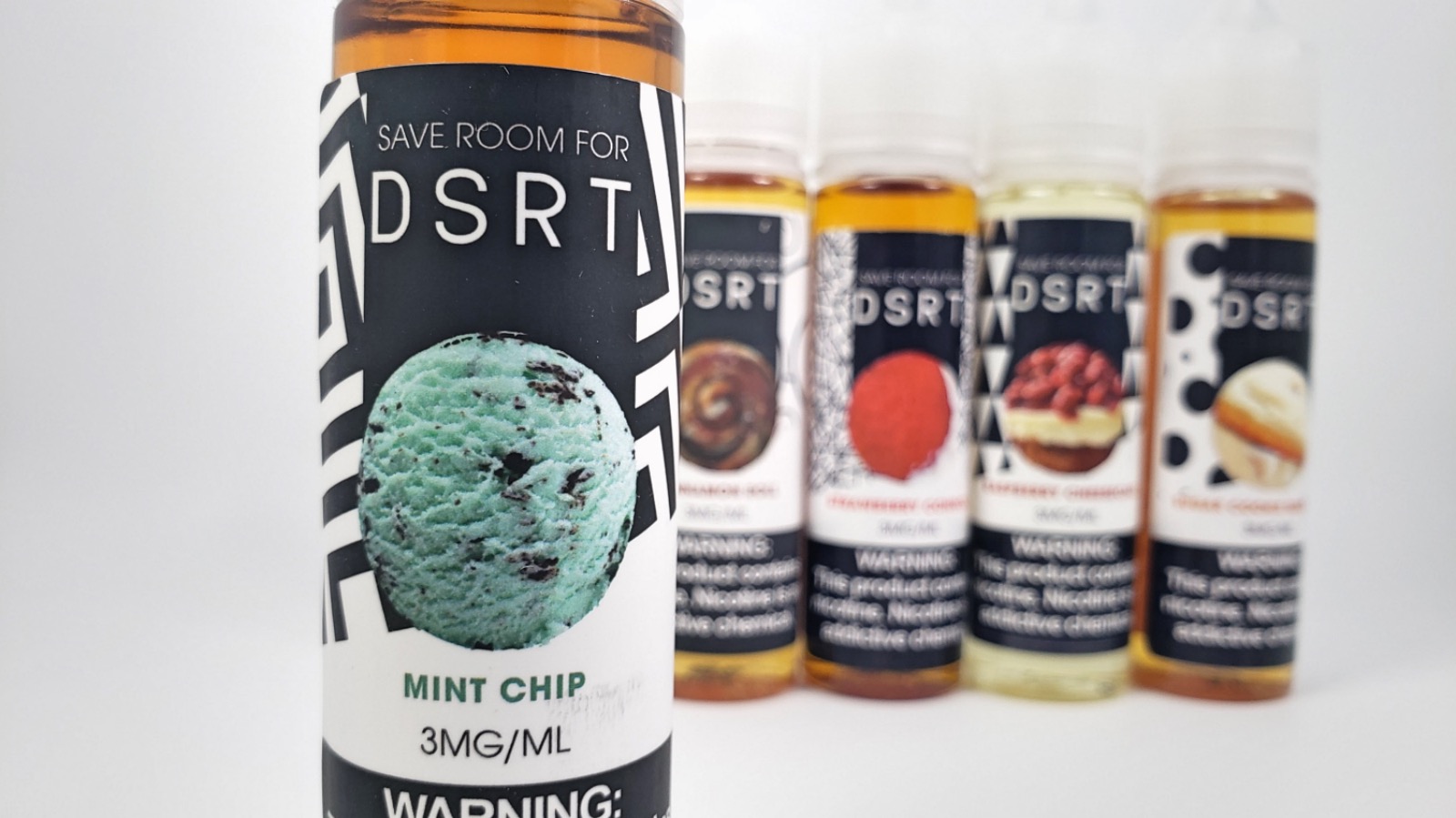 Apollo describes this as a mix of vanilla bean ice cream and mint chocolate chips that create a thick and creamy vanilla milkshake flavor. 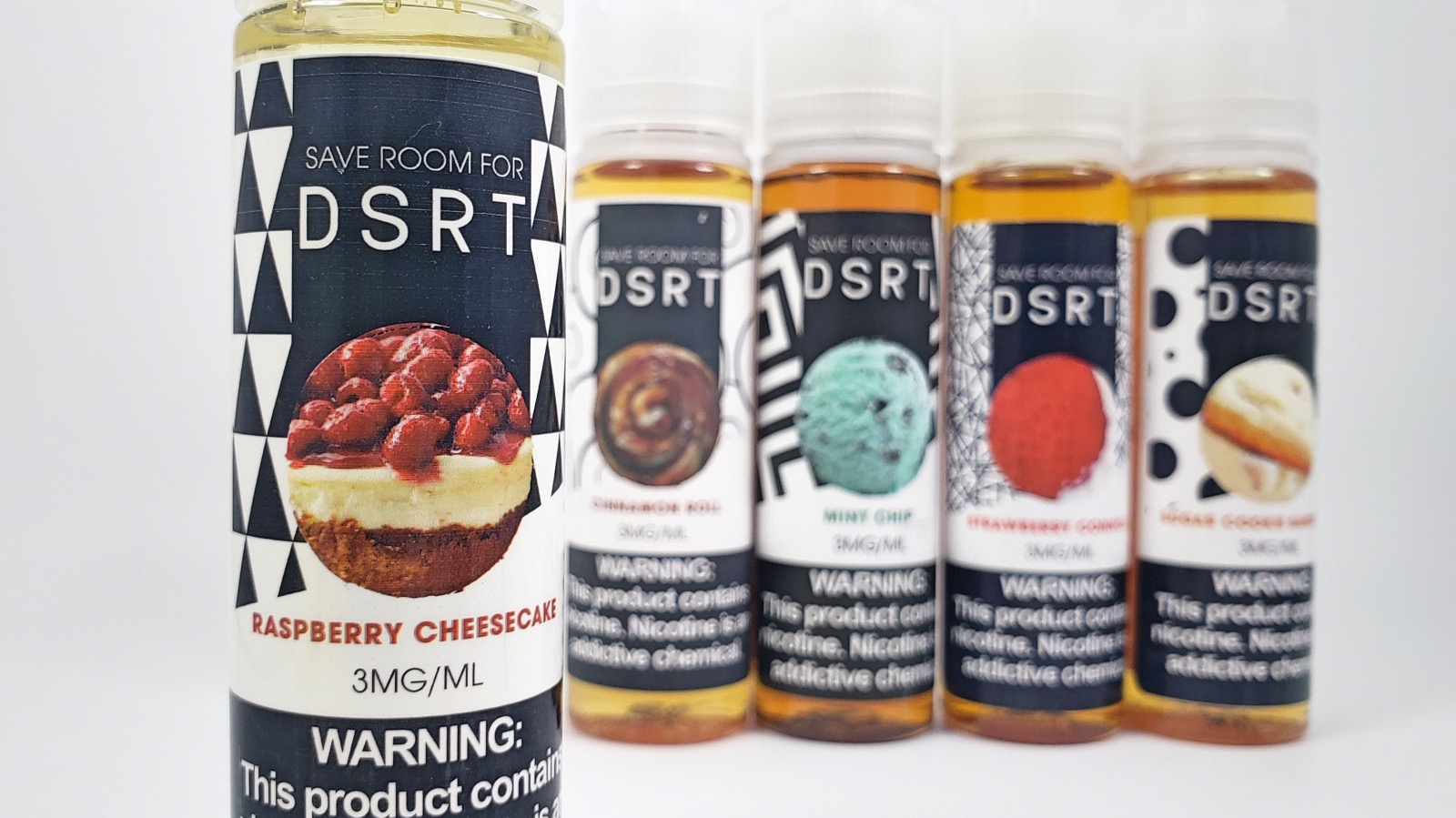 Apollo describes this as a sweet and creamy fluffy cheesecake with tart raspberries on top and a light caramel honey graham cracker crust.

It smells a lot like what a raspberry cheesecake tastes like. The flavor is a little different than the smell though. The raspberry flavor is much stronger than the cheesecake flavor. It’s like a really sweet candy-ish raspberry flavor with maybe just a hint of cheesecake. But to me, it really just tastes like thick raspberry syrup topping that would be poured over a cheesecake. I would have liked for that cheesecake and graham cracker crust to come out way more but I still like this one a lot just because of how sweet that raspberry is. I do think this one might be a little sweet for some folks though. Or at least until you get used to it. 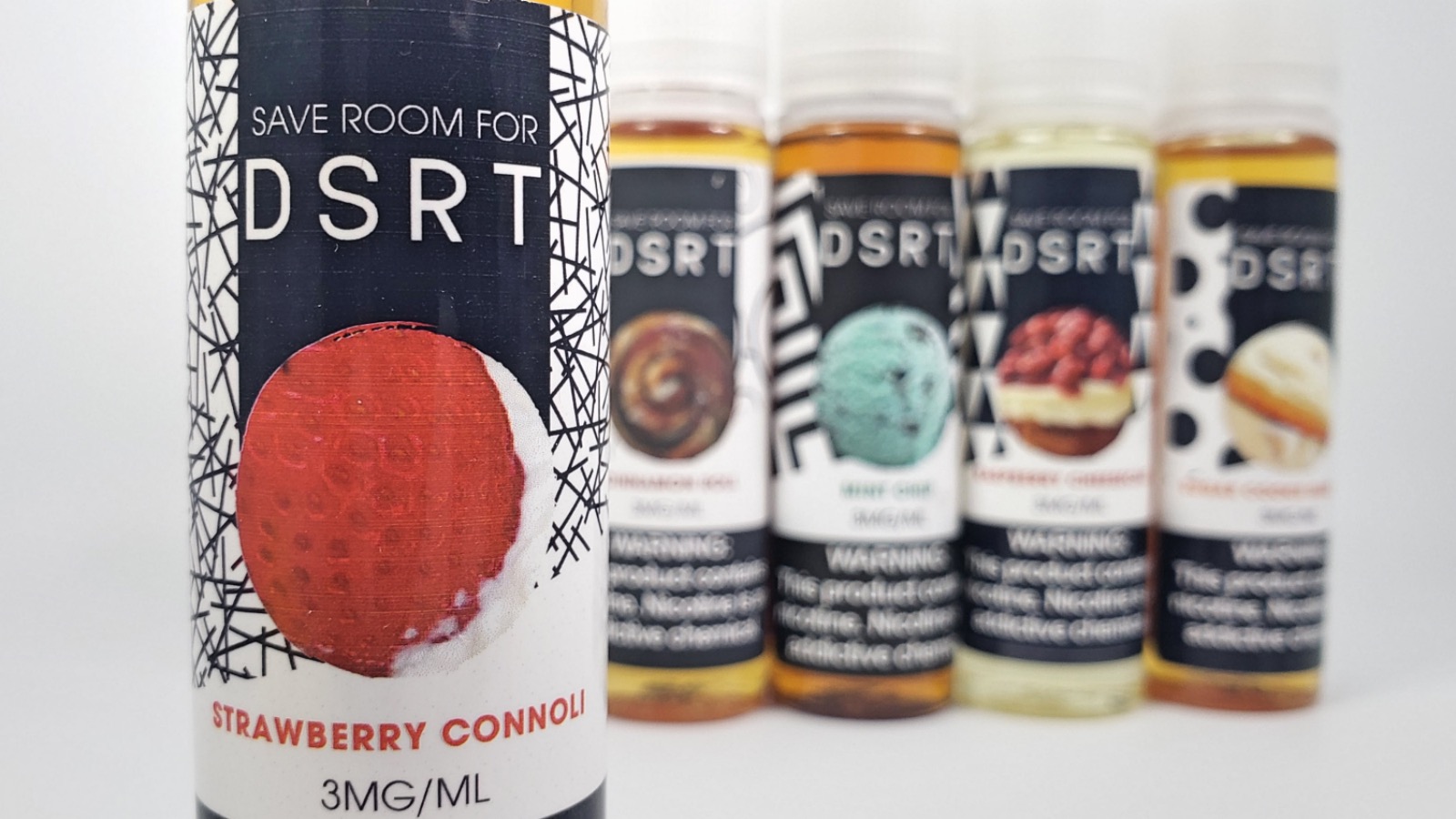 The flavor notes here are cannoli, cheese, and strawberries. Apollo describes this as a sweet and creamy deep-fried cannoli filled with ricotta and mascarpone cheese and topped with a strawberry glaze made of fresh strawberries.

Before jumping into this one I should mention that I’ve never actually had a cannoli before, of any kind. So I could be way off here. Okay, so this one is really good, and it does taste like a sweet strawberry dessert but I don’t get all of the notes that Apollo says this should have. I don’t get a deep-fried pastry flavor. And it’s hard to say if there’s ricotta or mascarpone because I don’t really know what those taste like on their own. But it definitely has a sort of strawberry glaze and milky creaminess, almost like strawberry milk but not strawberry milk. I will say it’s really good though. I would have liked for the strawberry flavor to be a little bit stronger but then again, maybe that’s how a strawberry cannoli tastes. 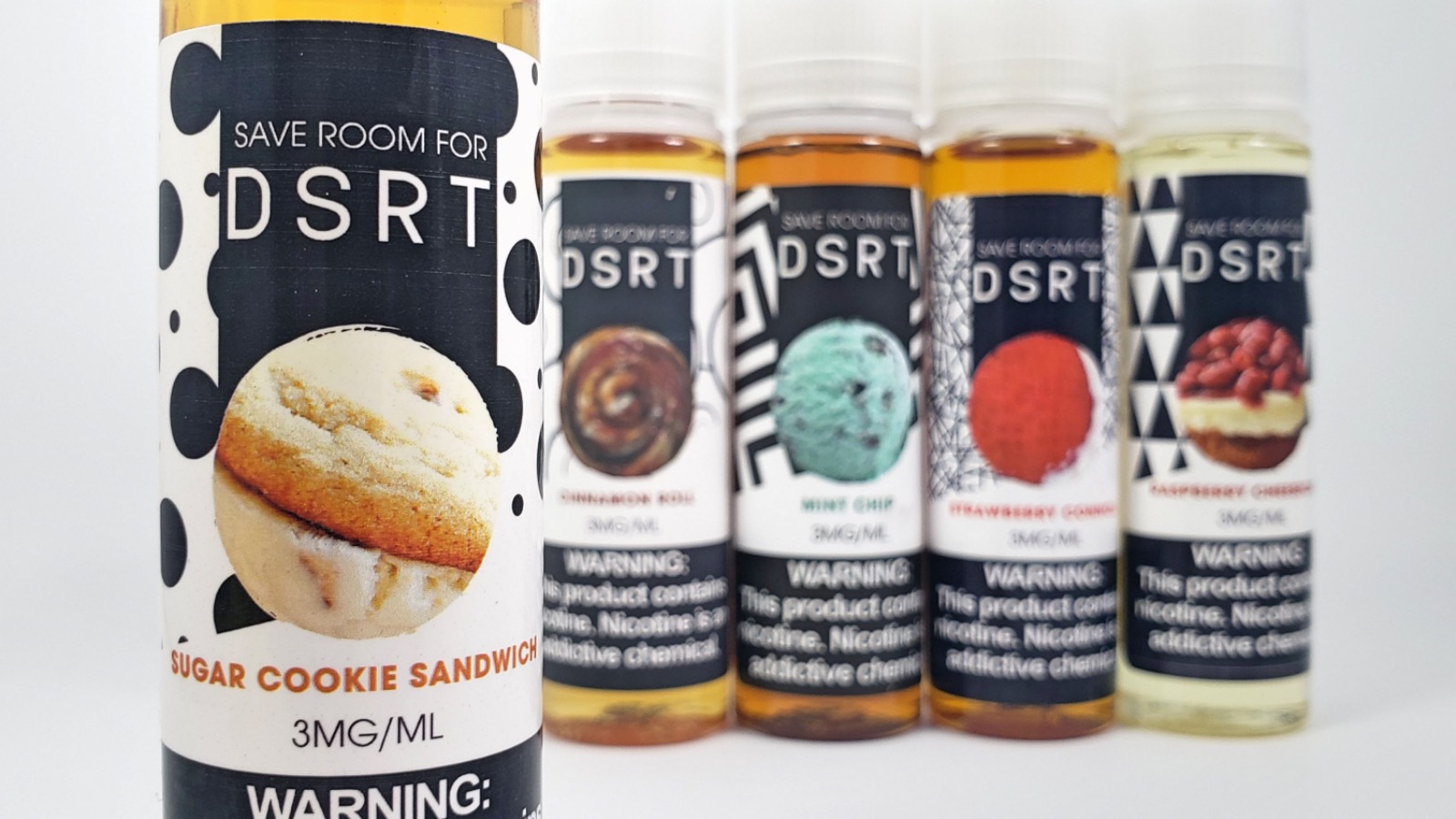 Apollo describes this as an ice cream sandwich made with classic vanilla ice cream and buttery cookies.

At first this just tastes like a vanilla bean flavor but the more you vape it the more that buttery cookie flavor comes in. The cookie is very light and you really need to look for it. It reminds me of those vanilla Oreo-type cookies. You know those generic cookies that look like Oreos but they have yellow cookies instead of brown. I would have liked for the cookie flavor to come out a little bit more but it is in there. This is a more mild flavor but it’s pretty good and I like it.

While not all of the flavors taste exactly as I would have wanted, several of them were spot on and all of them were delicious. I really liked every single one of them. I love desserts and I think Apollo put together a great line-up of dessert flavors here.