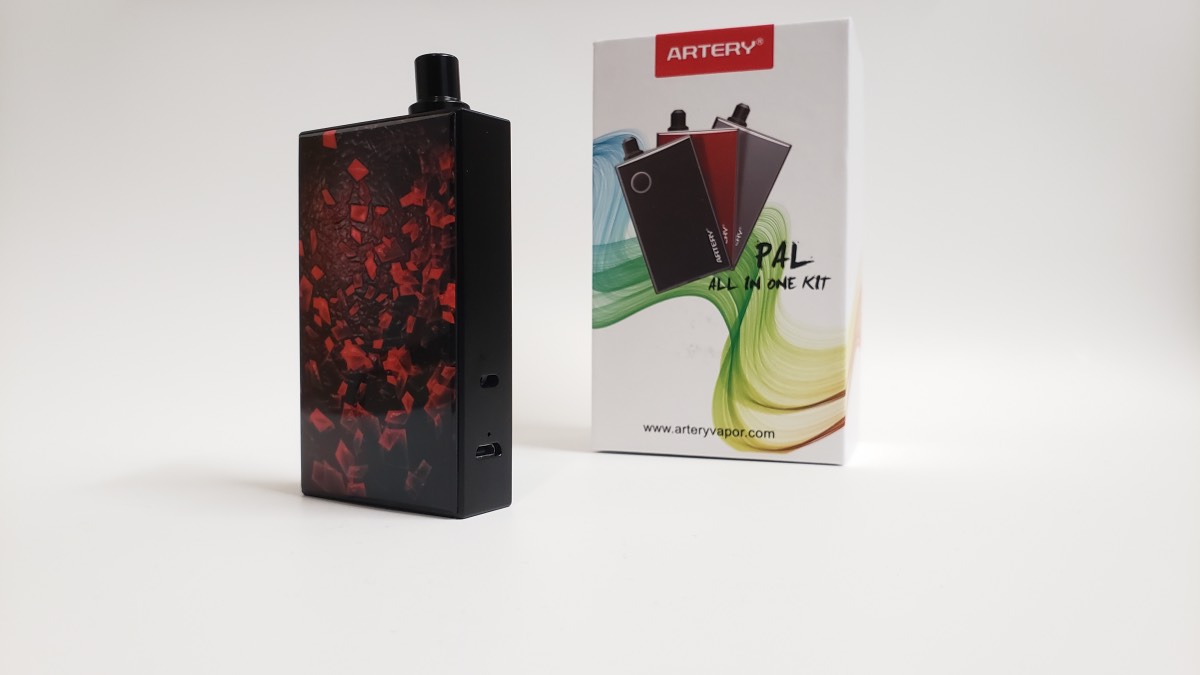 The Artery Pal was sent to me for review from BuyBest.com (affiliate). This is heavily inspired by the popular, high-end Billet Box device.

There are at least six different plate designs to pick from. There’s a solid black and solid red model if you like to keep it simple. There’s also a carbon fiber version. If you want something a little more artistic, there’s a blue & red resin version, a cracked paint model (which is a lot like stained glass windows), and then a version they call blood diamond, which is the model they sent me.

I’m a big fan of the design that BuyBest sent me. I love the way it looks. The plates on both sides are removable, but here’s a major con; Artery doesn’t sell the covers separately and they’ve said that they have no plans to do it. I think that’s a huge missed opportunity.

The size of the device is another nice plus. It’s small so it’s very portable and it’s also very thin so it’s really easy to carry around in a pocket. The refillable tank is very unique. It’s a removable block that comes out of the device so that you can replace the coil. The tank is held in place by the cap on top that the drip tip fits into.

The newer models of the PAL come with this really cool collectible coin, which is the size of a quarter. You use this to unscrew the plate that holds in the tank. It works okay, but a large flathead screwdriver or a smaller coin like a dime work better. It’s still cool that they included it though. So to put the coils in, you need to slide down the glass plate, push the coil up from the bottom, and then reach in and push the coil up the rest of the way. It’s not as simple as I think it could’ve been but not a big deal.

There are two coils that Artery sells for the PAL; the LQC 0.7ohm coil which is designed for around 15-25 watts, and a 1.8-ohm ceramic coil designed for 5-9 watts. You can get those in packs of five for around $15. I haven’t tried the ceramic coil so I don’t know how well it performs, but if it’s like most ceramic coils, it probably has better flavor. This device is also compatible with Aspire Nautilus coils.

The flavor from the 0.7-ohm coil is good. Nothing amazing, but good. Even though these coils are rated at different wattages, the device is non-adjustable, so you get as much wattage as the device is able to push. They perform well in the PAL.

To fill up the tank you’ll need to tighten it back down into the device. Then slide the glass panel down, and fill it up. You can fill it up laying down or standing up, but standing up makes it easier to see how full it really is. Then slide the cover and you’re good to vape. There are two versions of the Artery PAL on the market. The old version pulled airflow in from below the e-juice tank under the panel. Supposedly this created a lot of condensation behind the panel, so Artery replaced that airflow with the version that I have, which pulls in airflow from the side of the device below the firing button.

This is actually the reason for this channel that’s built into the panel. The airflow on the older model used to come in from the bottom and travel to the coil. So it has no purpose anymore but it probably didn’t make sense economically for them to redesign it so they just left it.

The new airflow now comes in from the side. I really dislike the positioning of it because I constantly cover the holes by accident while trying to vape. I’m a little more careful about it after using it for a while but it’s still annoying. I think they could have figured out a better place for it.

As the airflow resistance itself, it’s pretty loose. It’s like a restricted lung draw. It doesn’t work too well for mouth-to-lung tight draw vaping. So if that’s the kind of vape you’re looking for, you’d probably like this.

The device can push anywhere between 3.2 and 4.2 volts, so that means you get an amount of wattage based on the battery charge and coil resistance.

Using an ohms law calculator on the 0.7-ohm coil, that would come out to about 14-15 watts on a nearly dead battery or 25 watts on a full charge.

Using the 1.8-ohm coil, you’d get about 5.5 watts on a nearly dead battery and 9 watts on a full charge.

I’ve never used a Billet Box, but I’ve known about them for a long time thanks to the guys from the Plumes of Hazard channel on Youtube. I’ve wanted one for years, but Billet Boxes are just way out of my price range. So when I opened the Artery PAL box, I was surprised to see that it was nearly a clone of the Billet Box. It’s not an exact clone, but it’s obviously heavily inspired by the Billet Box in a lot of ways. Since I’ve never used a Billet Box, I can’t really speak to how the two compare, but I will say that for someone in my position who can’t afford one, I’m really excited to own something like it. This doesn’t replace my desire to own a Billet Box, but I think the Artery PAL is a nice cheaper alternative.

So that’s it for the Artery PAL. It works well, it looks very nice, it produces decent flavor, and it’s affordable. The location of the airflow sucks and replacing the coils might be a little more work than a new vaper would be interested in dealing with but I think a hobbyist vaper who likes restricted lung draws would enjoy using this.

If you’re interested, you can pick up the Artery PAL (affiliate) in six different designs from BuyBest.com for about $34