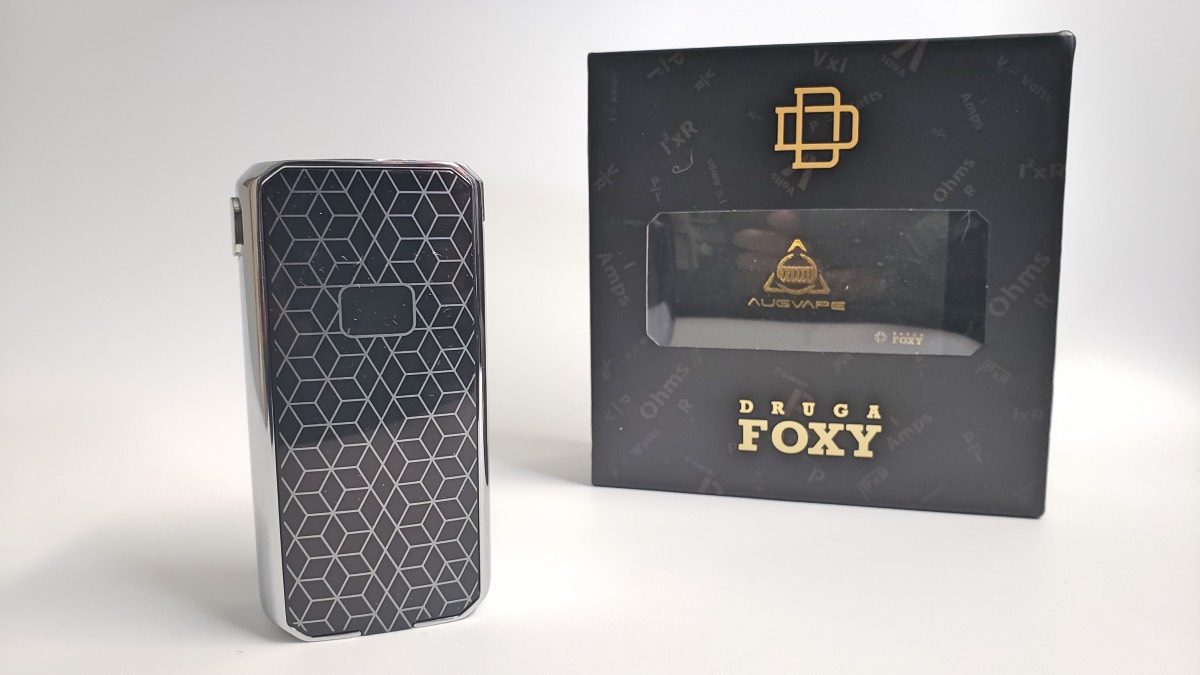 This Augvape Druga Foxy was sent to me directly from Augvape. This is a simple and absolutely gorgeous 150 watt vape. The design of the Foxy is definitely a big selling point. It’s an awesome and beautiful looking device. Its fancy, sleek, and shiny. When I look at this, I think Instagram. It’s worthy of so many great pictures.

What it lacks in features, it makes up for in looks.

This is made of zinc alloy, which looks great, but man, this thing is heavy. That doesn’t necessarily mean anything bad, just something to keep in mind. Actually one of my subscribers, Tony, mentioned to me that he likes the weight because it makes it feel extra durable and I think that’s a great point that I would have to agree with. Augvape says these are IML panels. I tried to do some research on this material and I couldn’t find much. I believe it stands for “In-Mold Labels” which is a plastic design process that molds labels or designs directly into the plastic, rather than using a sticker. I’m not sure there’s really anything special about it really, but its definitely better than being a piece of plastic with a sticker on it, which as you probably know, is pretty common with vape devices.

I would have liked for these to be made of metal, but then again, that would’ve made it heavier and more expensive, so I can understand the compromise. Metal would’ve certainly made it feel more luxurious, but then the design probably would’ve had to use stickers! So again, I can see the tradeoffs.

Both panels come off and from what I’ve heard, 3rd party companies will be making other unique panels you can buy, so that’s pretty cool. One panel hides the battery sled where you can place the two 18650 batteries.

There are indicators on the plastic showing positive and negative so that you know how to insert the batteries, but they are a little hard to see, so it would’ve been nice if they were more visible or colored.

The batteries are a little tight, but it’s not too bad. Just make sure you don’t forget to put that battery ribbon under the batteries or you’ll have a hell of a time trying to get them out.

On the front of the device, you’ll find a little tiny screen. It might seem crazy these days to have such a tiny screen on a new device but really that’s all this device needs, so it works just fine. The one thing I don’t like is that the window on the panel is tinted, which makes it a little hard to see the screen. When you take that panel off, the screen is really bright and looks great. This is actually a bunch of mathematical formulas designed to help you calculate ohms law, but I think you’d have to be good at math to get anything useful out of it. I’m terrible at math, so for me, it’s just a bunch of pretty pictures. Alright, and now for this new quick release feature. So this is something new that no other company has done yet, at least as far as I know, and Augvape says they own the patent in China. So you’ll see this switch here on one side of the device. If you push it, you’ll see that half of the 510 threads open up. That lets you quickly pop the atomizer off the top so that you can screw in another one. This probably isn’t going to be useful for most people, because who uses that many tanks, but I’m sure some people might like it.

You can still screw an atomizer on here like you would any other device, but you can use the quick release too, however, I would worry about cross threading because you never know where the threads on the atomizer will be when the quick release closes on them.

There is one other benefit to using this quick release feature and this was also pointed out to me by TurboTony and its a really cool idea.

Just open the quick release wide open, push the atomizer all the way down into the position you want it, and then release the quick release. If the quick release button doesn’t fully close, you’ll have to reposition until it does. You don’t want to leave that clamped down on the threads of your atomizer. All in all, I really like this one a lot. It’s a really nice device. It’s simple, but it looks great and if you’re just a regular wattage vaper, I think you’re going to love it.