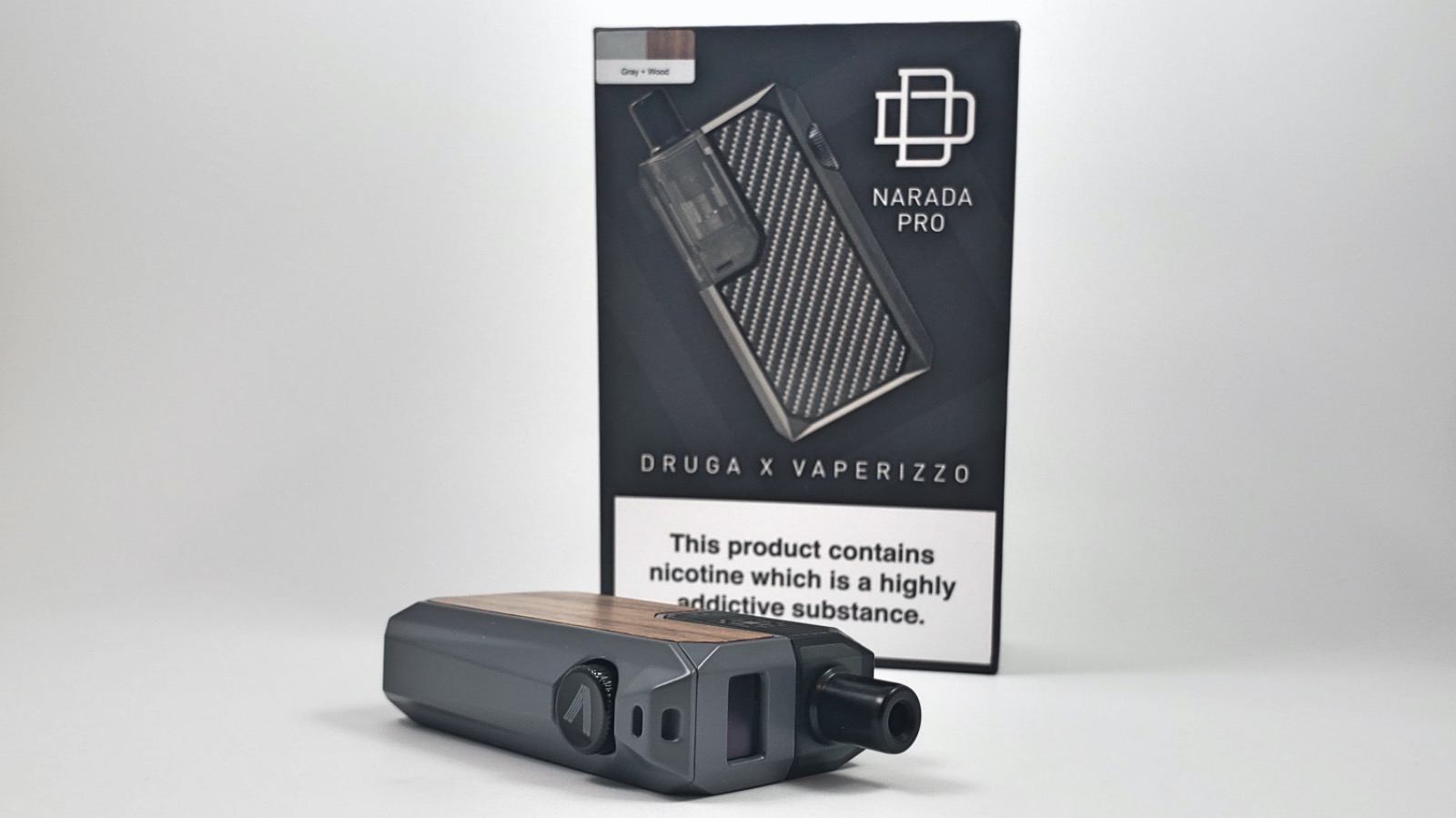 The Augvape Druga Narada Pro was sent to me for review from Augvape (learn more here). This is a new 30-watt pod mod from Augvape made in partnership with Vaperizzo. It’s designed to be minimalist, slim, and stylish. The Narado Pro looks really cool in my opinion. I like all of the styles. When I first saw the black carbon fiber model, my first thought was how rugged it looked. And then I saw the other two colors, a black leather model and a wood model, which look totally different from each other. I really like that Augvape went beyond simple color changes, but really tried to make each color look drastically different. On top of the device is a small LED screen that shows your wattage, coil build, and battery life. The only drawback with the screen is that it can’t be flipped, so depending on how you like to look at the screen, it might be upside down for you.

On the front are some slots for a lanyard (sold separately), and below that is the firing button. On the very bottom is the USB-C charging port. To turn the device off and on, press the firing button five times fast.

While the Narada Pro is designed for minimalism, that doesn’t mean it’s featureless. There’s only one button on the device, which is the firing button, but that firing button also lets you fine-tune the wattage, voltage, or temperature by turning the knob.

The Narada Pro goes from 5 watts to 30 watts.

Out of the box, the Narada Pro only supports variable wattage, but if you really want variable voltage or temp-control modes, you can upgrade the firmware. The mouthpiece is a standard 510 removable mouthpiece. There’s nothing special about it, but it works. And it’s removable, so that means you can use your own tip on here too if you want. The pods hold a max capacity of 3.7ml, which is quite a bit for a pod. That means you’ll have to fill this pod up less often than most other pod devices. The airflow intake is on one side of the pod and on the opposite side of the airflow is the liquid fill port, which is sealed with a rubber gasket. Just pull that gasket out to fill it up. On the bottom of the pod is where you insert the coil. Having removable coils instead of built-in coils is a big plus for me. The airflow works by pulling air in from the side of the pod, drawing it down to the bottom of the coil, and then back up through the chimney. This is a good way to prevent leaks and it performs well overall.

And Augvape also included an adjustable airflow switch on the pod, which is awesome. You don’t see many pod devices with adjustable airflow, so this is a big benefit. The switch goes up and down and can be set anywhere in between the top and bottom positions.

Even at it’s most restrictive, it’s still not as tight as I would have liked, but it’s not bad. 1.0-Ohm Coil – This is a regular spaced vertical coil designed for tight-draw MTL vaping. So you’d use higher nicotine liquids with this one 0.4-Ohm Coil – This is a mesh coil designed for mouth to lung hits. If you’re using low nicotine liquids, this is the coil you want. You get bigger hits, more vapor, and because it’s a mesh coil, you’ll get better flavor too. If you like to build your own coils, Augvape also separately sells a rebuildable coil head. I’m a big fan of rebuildable, so I love that they’ve made this. It really prolongs the life of the device because you don’t have to worry about pre-built coil heads ever going out of production. And plus, rebuilding is just fun. Or at least it is for me.

This is a pod system, so the rebuildable head is super-tiny. There’s just no getting around that. You’ll need steady hands and you might need a magnifying glass. But it’s not too difficult if you’re capable. Build your coil, tighten the legs down into the posts, and position it right into the middle of the deck. You can wrap the wire around the post to get it in the right place and tight. Make sure that when you clip the wires that it’s as flush as possible, otherwise you won’t be able to get the cap on over the deck. What’s also really cool is that you can dry-fire the rebuildable coil in the pod by using the pod adapter that comes with the RBA deck. That’s a really smart feature for them to include. When you got it just right, add the cotton.

You don’t want to add too much cotton or it won’t wick well. That’s just something you’re going to have to play around with to get right.

Then you can insert it into the pod just like you would a pre-built coil head.

The rebuildable head has a 1.3×2.2mm airflow hole. This is about the same as using the mesh coil head, so you’ll be getting more airflow by using this. The battery charges using a USB-C port, which I’m really glad to see. Most new devices should be using USB-C at this point. That also makes it really fast to charge. A dead battery will only take 25 minutes to come up to an 80% charge, so it’s quick. The Narada Pro is simple but very cool. I really like that Augvape made it super easy to use right out of the box and for anyone who wants more advanced features, you can upgrade the firmware or buy a rebuildable coil head.

I also really like they created an adjustable airflow intake on the pod. One of my biggest complaints about pod systems is the lack of airflow because I really like my pod systems very restricted. And with this, I can do that.

The Narada Pro works great, looks great, it’s tiny, and the coils have good flavor. I really like it.

The Narada Pro was sent to me for review from Augvape and you can get it for around $40 from most stores from what I’m seeing online.