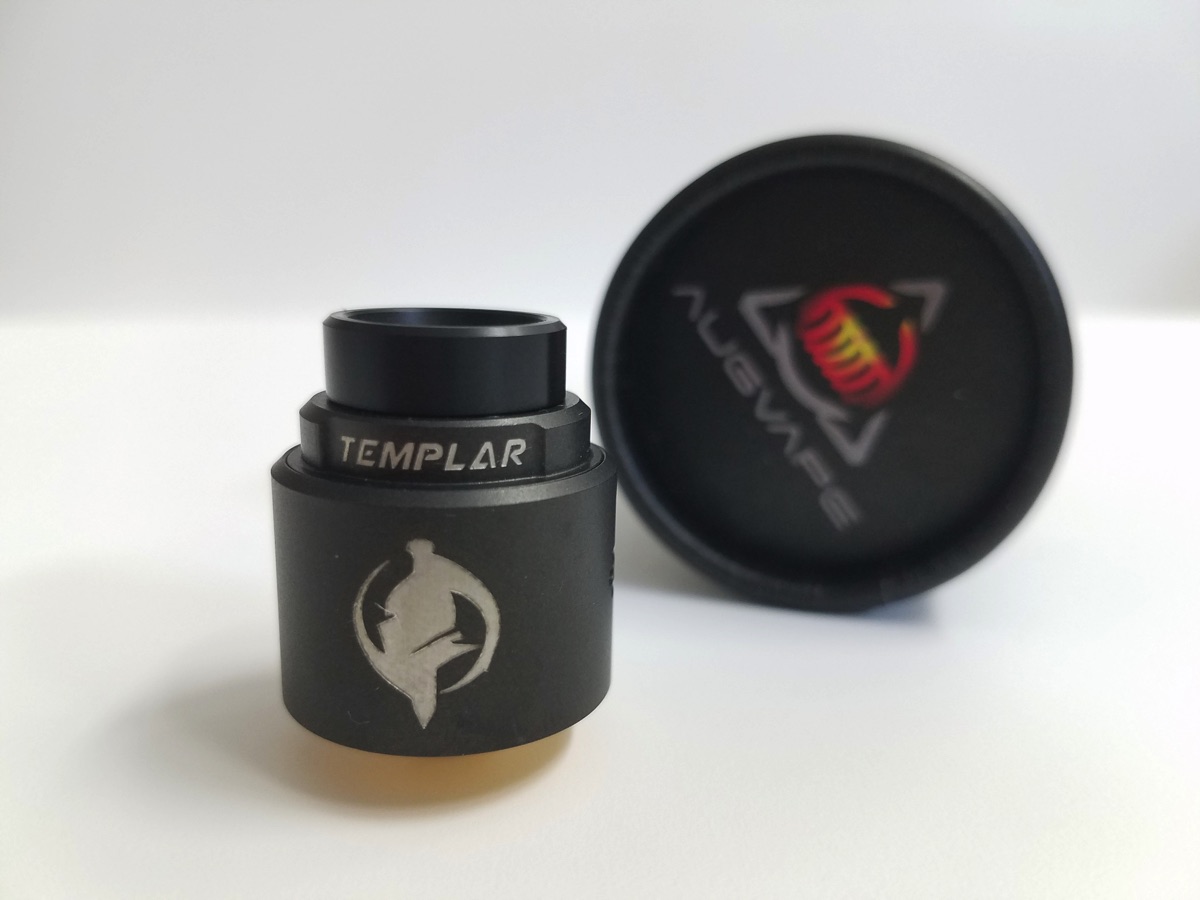 The Templar RDA was sent to me from Augvape for the purpose of this review. So this is just a nice little low profile RDA with a unique deck, some cool extras, and good flavor. It comes in two colors that I know of; black and stainless steel. I’ve seen other sites also carry a blue version, but I don’t know if that’s an official color because I didn’t see it on Augvape’s site. In the accessories bag, you get some o-rings, a 510 adaptor, and a squonk pin. It’s also supposed to come with a plug to make your RDA single-coil compatible, but unfortunately, mine didn’t come with one. So starting at the top is the 810 drip tip, nothing special about it. You can take it out and use your own 810 if you want. The Templar also came with a 510 adaptor if you want to use a 510. The one negative thing about the drip tip is that it’s really hard to get out of the top cap. It’s a very minor issue, but just something I noticed. The top cap fits into the barrel and is snug with a single o-ring. You’ll see that it has cutouts for the airflow that line up with the airflow slots on the barrel. Those cutouts are the exact same on both sides and step down, which allows you to open one, two, or all three slots. It starts by opening the bottom airflow slot and moves up. The airflow works great, but the one problem is that it’s really hard to see which airflow slots are open. Unless you have a lot of light, you can’t see them at all. I had to use the light on my phone when I was in the house. It’s not that big of a deal when you have it open the way you like it, but if you adjust your airflow often, it might be a little annoying. The first thing we should talk about on the deck is the titanium screw. I’m not really sure why they went with titanium here. Titanium looks and sounds cool, but it doesn’t really have any benefits over stainless steel other than that it’s lighter. But for a post screw, the weight doesn’t matter. Titanium can be mixed with different alloys to become very strong, but it’s still not usually stronger than stainless steel, which means it’s more likely to break and more likely to strip. That’s not to say it will, but it’s a softer metal than stainless steel, that’s all I’m saying. So if there’s any benefit to using it on an RDA, it’s for the looks. Anyway, the post screw is locked into place with a locking washer, which makes the screw a little difficult to replace if you ever need to. And this RDA doesn’t come with a spare post screw either, even if you wanted to replace it. So just don’t go crazy cranking down on it. Alright, now the posts. They call this a Velocity Clamp System and it’s because it has two coil holes lined up vertically on each side, similar to the original Velocity deck. I can kind of see how that would be like a Velocity deck, but really, I think this is a deck all it’s own. They didn’t need to call it a velocity style deck.

The deck is actually really cool. You undo the screw and it raises up, which opens up the big post holes. You can fit some big coils in here which is great. And it’s so easy to build this deck. Toss the coils in there and tighten down the single screw and that’s it. I really like how easy it is to build this one. The juice well itself isn’t big, but it holds a decent amount of e-juice.

So like I mentioned earlier, this was supposed to come with a block that allows you to close off one side of the deck so that you can use it in single coil mode. Mine didn’t come with one, so I can’t tell you anything about it except that I’ve seen other people say that it works fine. Augvape included a frosted cap that you can use to totally replace the main barrel and top cap, which I think is very cool.

This is just a whole new cover for the deck. You can’t adjust the airflow, there are just two slanted airflow slots on each side that are directed at the coils. It seems to have a little less airflow than the other barrel. This one also clicks into place like the other one. I’m not really a fan of how the frosted cap looks, but there are some nice benefits to using it. You don’t have to deal with adjusting the airflow, it’s really comfortable to hit, and you can see how much e-juice is in the deck. Being able to see the deck is actually handy.

If I was to compare the flavor of the Templar to something like the Goon 1.5 or the Bonza, it’s not even close, but the flavor is good. In my own experience, the flavor from both the metal cap and frosted cap are really similar, but it does seem like the metal cap is a little more flavorful. But honestly, that might be all in my head. The flavor production from both is very close.

So that’s the Templar RDA. There’s really not a lot of cons to mention here, other than that the airflow holes are hard to see and that the titanium screw might not be as strong as a stainless steel screw, but that’s about it.

There’s a lot to like about the Templar. It’s a small little low profile RDA that has good flavor, a unique and easy-to-build deck, and they even included an extra cap, which I think was really cool.

If you want to pick this up, you can get it for $30 from Augvape.com.