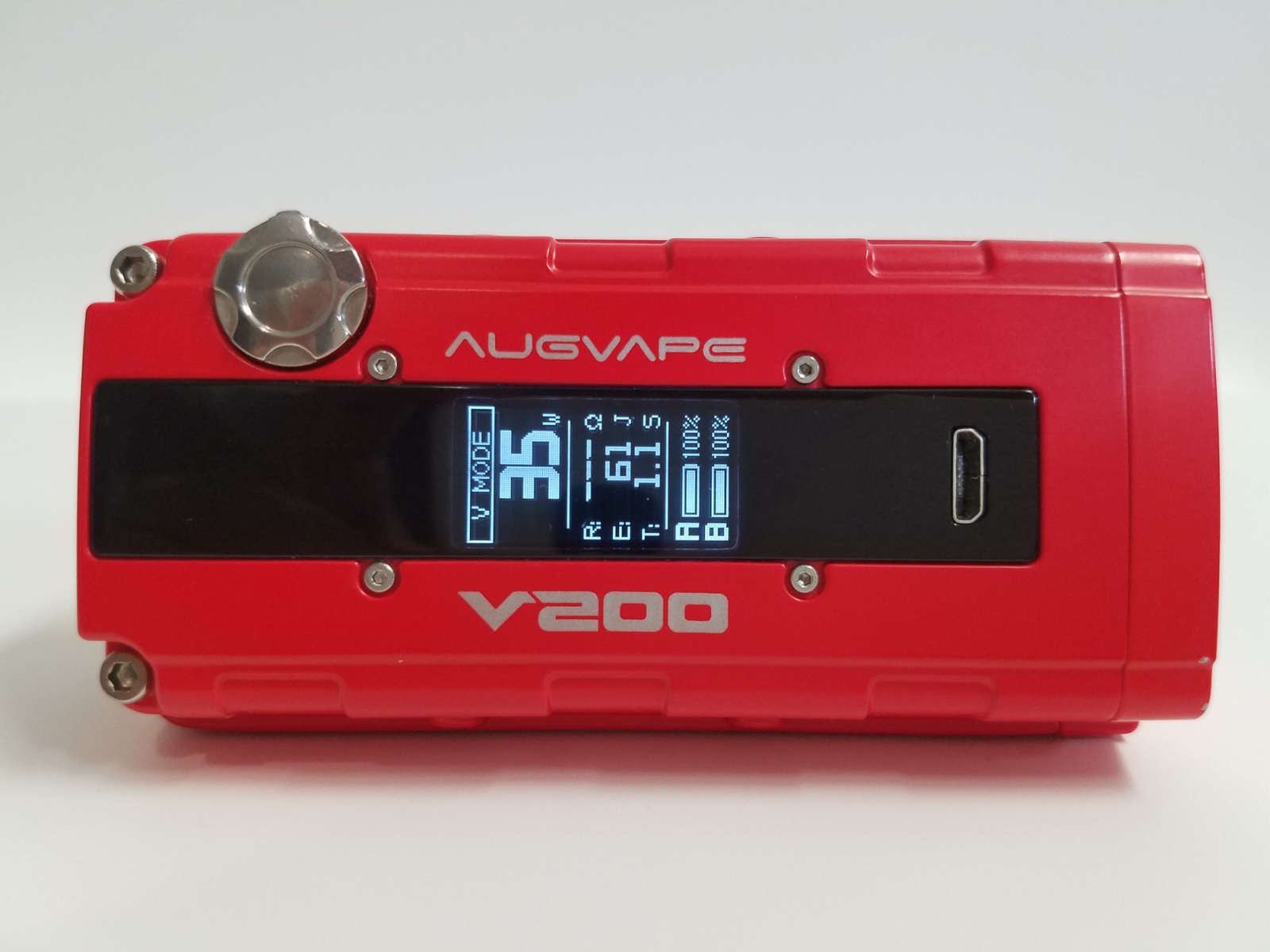 The Augvape V200 Mod was sent to me from Augvape for the purpose of this review. This is just a simple 200-watt mod without a lot of features, but it does what it’s supposed to perfectly. So lets get right into it.

In the box you get the V200 Mod, a user manual, and USB charging cable.

Designed After a Car Engine

As you can see, the model that I have is red, but Augvape also makes this in white and black. I’m not usually a fan of bright colorful devices, but I’m actually glad they sent this in red because that’s the color of the car engine that this is modeled after, well actually the most popular color. That engine was also made in black and white, they just don’t seem to be as common. So let’s talk about the design. When I first saw this, I thought it looked kind of ridiculous. It reminded me of something like a power drill case or like one of those heavy duty radios people use on construction sites. But if you’re a car person, more specifically someone who is really into Hondas, you might know what this looks like. So you’ll see on the back of the device some text that says “Inspired by B18C-R”. If you look that up in Google, you’ll see that it’s an engine, and you’ll also notice that the V200 mod looks exactly like it.

And then you have the wattage adjustment wheel, which looks like the oil cap. On the top is the 510 connector, which is supposed to look like a rim. Obviously that’s not actually on the engine, but it sticks with that car theme. And the 510 is right in the middle of the device. Atomizers sit flush and because the mod is 29.2mm wide, you can fit anything up to that size without any overhang.

Ok, now lets talk about the screen and features. First, to turn it on is five clicks, like anything else. The same to turn it off.

The screen is nice and bright. Everything looks crisp and clear. No complaints there. It shows what mode you’re in, the atomizer resistance, your wattage, the time or how many seconds of your hit, and the battery levels of each battery.

The V200 Features and Modes

At the top of the screen is the firing button. It’s hidden behind the screen. I like this because it makes it easy to fire with either your left or right hand. And that button is clicky and very responsive.

Alright, lets talk about those modes. Auto is your typical wattage mode. Nothing special about that. It fires immediately, but has a bit of a slower ramp up time if you’re vaping high wattage. At lower wattage, say for example 30 watts, I don’t notice a slow ramp up at all. In bypass mode, it basically runs like a mech mod, but with the safety features of a regulated device. So you’ll get whatever wattage you should get based on your build and the voltage output of the mod, which is 8.4. So it’s more like a series mech mod. But you’re limited by your batteries here. For example, I ran a 0.23 ohm build and at 8.4 volts, I should get 306 watts. This device can’t do more than 200 watts, but it also hits those batteries hard and drops the wattage to around 166 watts. But yeah, it basically works like a series mech mod. Now let’s talk about V-Mode. So this mode is just like regular wattage mode, but it’s supposed to give you faster ramp up time and more stable wattage. I haven’t noticed that I get more stable wattage in any of the modes. The wattage seems stable to me in every mode, so I’ll just have to take their word for it. But for faster ramp up, it does seem to work like they say, especially at wattages around 70 watts or higher. Regular mode works great as it is though. It might have a second longer ramp up, while V-mode is more immediate. I have no way to test it, but it feels like it’s working to me. On the front is a USB port designed only for charging. They included a really nice nylon wrapped USB cord too. I always recommend buying an external charger for batteries, but you can charge the batteries in the device if you want. While it’s plugged in, you’ll see a little red light at the top of the screen dimming in and out. This also has a passthrough ability, so you are able to vape it while it’s charging. They don’t mention this in the manual, so I can’t say for sure if it’s designed to work that way. That’s the V200! Even though I don’t really care about cars, I actually think the design is really cool. I also like the size of this mod. It feels really comfortable in the hand and isn’t too bulky, which also makes it easy to fire.

My favorite thing about the V200 is how fast it fires. It fires as soon as you hit that button!

The one drawback for some people would be that it doesn’t have temp-control, but if you’re a regular wattage vaper, the v200 is awesome.