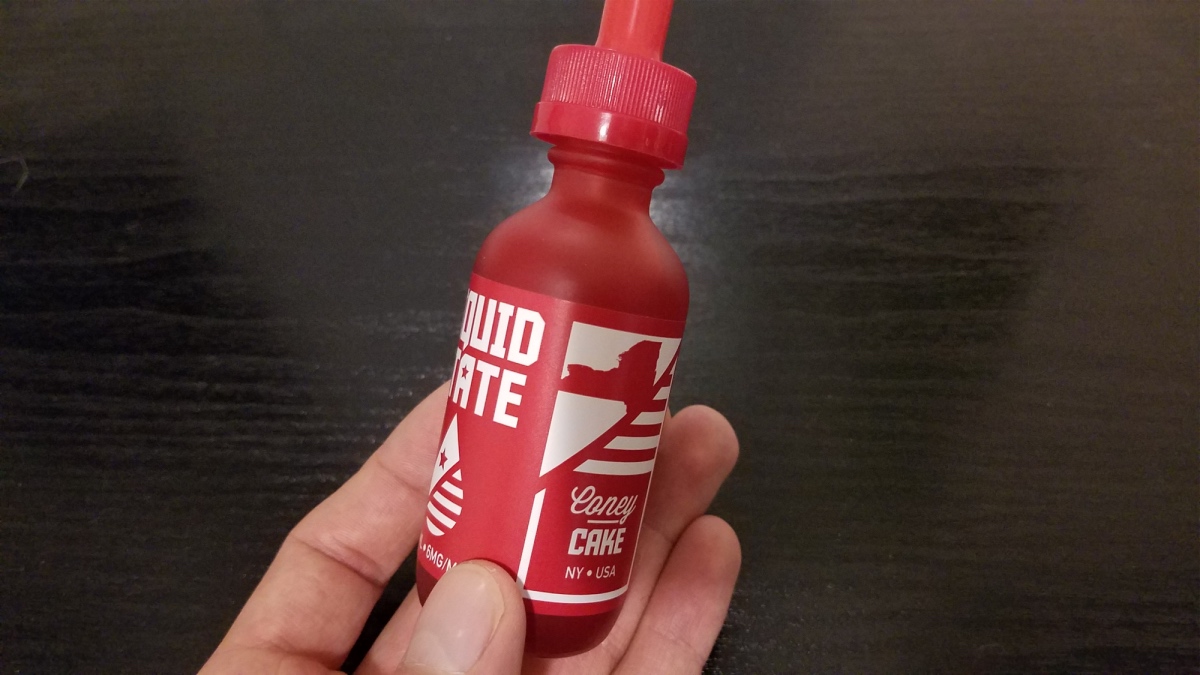 Coney Cake was sent to me from CloudCounterVapor.com. They sell online, but also have a shop in Austin, Texas. I’m really impressed with their stock too. They carry things like Cotton Bacon, the Reload RDA, Sourin Air, the Smok Prince kit, and even the Squid Industries Double Barrel v2 kit. I just thought it was interesting that they carry so many really popular products, even in their brick and mortar shop. That definitely sounds like an awesome shop.

Coney Cake is described as being a Brooklyn boardwalk favorite topped with powdered sugar and rich vanilla bean ice cream, then finished off with strawberry and blueberry compote. If you don’t know what compote is, it’s just a sweet fruit syrup that has whole pieces of fruit in it.

So all of that is a really fancy way of saying that this is a strawberry/blueberry syrup-covered funnel cake with ice cream.

I wanted to do something a little different with this review so I went to get a real funnel cake to compare to the e-juice.

We have a few great places to get funnel cakes around Denver, but I don’t have time to run around and spend a bunch of money, so I went to Dairy Queen! And if you look at this funnel cake, it’s practically exactly as Coney Cake is described. The only thing missing is the blueberry syrup. Dairy Queen’s funnel cake isn’t anything special, but it’s good and tastes like a funnel cake.

So after eating the funnel cake and having a really good idea of what the e-juice should taste like, doesn’t it actually hold true?

No, it doesn’t. Not even close to the real thing. 😉

But, it has a lot of the characteristics!

It has a just a slight hint of the fried dough, it has that powdered sugar taste and mouth-feel, and it definitely has that strawberry flavor. And the strawberry is actually like a syrup, not like a fresh strawberry. You really do get all of the flavors of a funnel cake, just not as distinct. I actually think that if they made the fried dough flavor a little stronger it might actually be like the real thing.

Coney Cake is really good though. I’ve been vaping it pretty much non-stop for about a week now and I don’t get tired of it. It’s sweet and delicious. And before comparing it to a real funnel cake, I actually thought it tasted like one, right from the moment I opened the bottle. Unless you’re a funnel cake expert, you’ll probably think it does too.

It’s a little pricey at about $24 for a 60ml bottle, but if you want to splurge on a premium bottle of e-juice, it’s totally worth it. Look up other reviews too if you don’t believe me. A lot of people think it’s worth the price.

So like I mentioned earlier, you can get it from CloudCounterVapor.com in 60ml bottles for $24 in nicotine strengths of 0, 3, 6, and 12.