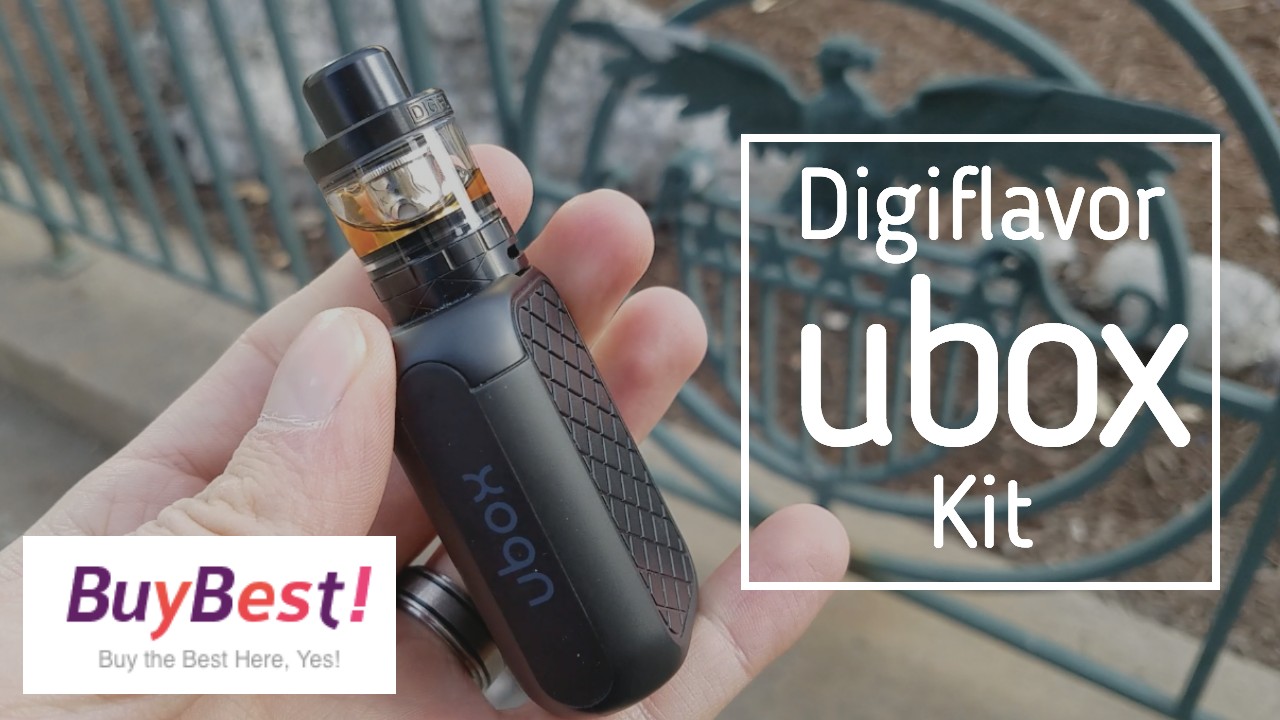 This was sent to me for the purpose of review from BuyBest.com. You can check it out on their site here.

This isn’t a new product. It actually came out around March 2017, but that’s okay, it was fun to use, so I’m still glad they sent it. I think this came out before DigiFlavor even became popular.

In the box, you get the Utank sub ohm tank, a user manual, a USB cable, the Ubox mod, an extra Utank coil head, and a pack of spare parts.

The UBox kit comes with the Ubox mod and the Utank.

This is a very tiny mod. I wasn’t expecting it to be this small before opening the box. But seeing how small it is explained why it’s only a 28-watt device.

It has an internal battery and it charges using a USB charger.

The Ubox has what Digiflavor calls a textured surface for better grip, but it’s really just a design. Those grooves don’t really improve grip.

On the front, there’s a firing button, some light indicators, and a USB charging port. On the bottom, there are some vent holes

The 510 doesn’t appear to be spring loaded. I was pushing pretty hard and it wouldn’t move. I’ve seen other people online say that it is spring-loaded though, so maybe it is.

It’s interesting that they made the 510 recessed from the top of the device because that means you’ll only be able to use 22-millimeter diameter tanks on it. That’s a bit of a drawback. One problem with that recessed area is that it makes it difficult to move the airflow control ring on the tank, so that’s another small con.

The Ubox has your typical protections; overheat protection, overtime protection, and low voltage protection. It will also go into sleep mode after one minute of an activity, so to wake it back up you have to press the firing button.

The LEDs and Charging

The three LED lights tell you a few things.

While the Ubox is charging it will blink, indicating the charging status and it’ll stop blinking when it’s fully charged.

The Ubox has a pass-through function too, so you can vape it while it’s plugged in.

In the bag of spare parts, you get a longer drip tip, so if you want to make it longer you can. These drip tips are actually more like covers that attach to a nub on the tank. That means you won’t be able to use your own drip tip on this tank.

Starting at the top, you have the drip tip, which is more of a cover. It covers a little nub at the top of the tank. You’ll get a small little drip tip and a long one. So if that short drip tip is giving you problems with getting too hot, you can switch to the longer one. I haven’t had any problems with heat though.

At the top of the tank is a top cap with an o-ring that seals it off from leaking. Unscrew that and you can fill up the tank. That glass tank is held in place with two o-rings on the deck. I had a hell of a time getting that glass tank off, but only right out of the box. Once I had it off, it wasn’t a problem anymore.

But this brought up another concern – if that glass breaks, you’re out of luck because there isn’t a spare. So just something to keep in mind.

The UTank takes 0.5-ohm coil heads. These are single vertical coils that handle 20 to 35 watts, which is pretty much what the mod will put out – 28 watts. So this tank seems perfectly designed for this atomizer.

There’s nothing really special about the base, but let’s talk about the airflow control ring on the base. It will spin continuously without stopping, which is fine. The airflow ring has a little restriction but it isn’t too loose or too tight. The airflow is decent. It’s not designed for cloud chasing, but you still get some good airflow out of it.

The flavor isn’t amazing. I wasn’t expecting a whole lot out of a tank like this, but I still would have liked a little more flavor. It’s not terrible though.

When I saw the Ubox online, I thought it was kind of kind of ugly, but after getting it in my hand, using it, and seeing how small it is, I actually like the way it looks.

I’ve been using this kit for a couple of weeks now and I love how small it is. It’s great for throwing in my pocket and not having to carry around a bulky device. It only pushes 28 watts, which doesn’t sound like much but if you’re using the included Utank, it’s perfect. The device doesn’t have a screen or any features at all really, but it’s basic and works. And the battery seems to hold a good charge. The only con I really have is that it has a recessed section for the tank, which limits you to using only 22m diameter tanks.

The tank is just okay. It has good airflow and it’s easy to fill, but I did have problems taking it apart. It would have been nice if Digiflavor included a spare glass tank too. The flavor is decent, but nothing amazing. And something I’ve noticed is that it takes a long time for the e-juice to saturate the coil heads. Also, it would have been nice if we could change the drip tip to a custom tip.

But that’s about it. It’s a very simple, no-frills kit. It’s tiny, easy to use, has decent flavor, and works well. If that sounds like something you’re interested in, you can get the Ubox from BuyBest.com for about $24.