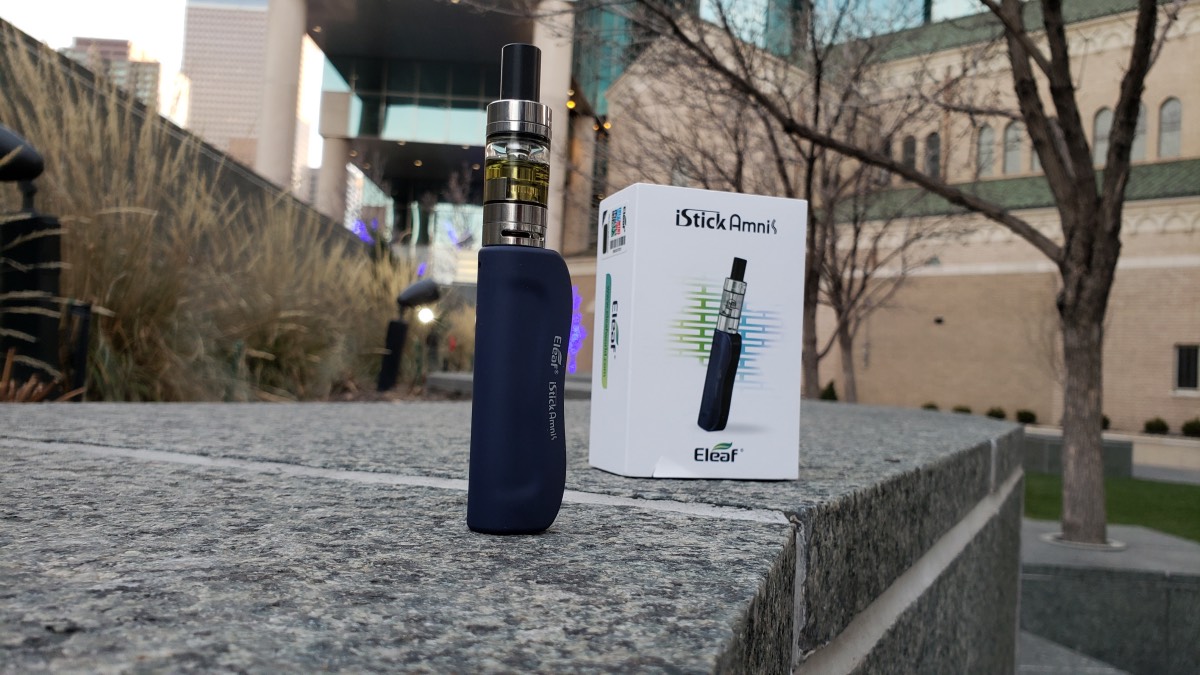 This was sent to me for review from HeavenGifts.com. Get it here (affiliate). The Amnis is a small, sleek, and well-designed low-wattage device from Eleaf, a company who in my opinion, has always put out very well designed and good-quality products. The design of the Amnis is pretty nice. It has a nice curvy look to it and the feel of the casing is nice too. The texture seems like a plastic with a slightly rubberized non-slip coating.

It’s small and thin, which is very nice for portability. It just disappears into the walls of your pockets. But the small size can be a little uncomfortable to hold too. It’s no shorter than a typical pod device, but because of the shape, you want to hold it like a normal sized device, and if you try to hold it like that, it’s not very comfortable. But if you rest it on your pinky and fire with your thumb, it feels just fine.

The device puts out a max of 30 watts, but since this is a direct output device, it can only push 30 watts on a full charge. As the battery dies, the wattage goes down.

This will also depend on the coil you’re using. Since this has a normal 510, you can put any tank on here as long as it’s within the limits of 0.15ohms to 3.0ohm, but since it can only put out 30 watts max, you’re going to want to keep the coils very tiny. The battery inside the Amnis is a 900mAh battery. This is decent for a small device, but I have found that it runs out a little quick so if you vape a lot you’ll probably have to charge it throughout the day. Since it charges using a mini USB, it shouldn’t be too much of a hassle for most people to charge regularly.

The LED lights when you’re vaping and charging and it also lets you know how much battery life you have left. There are fours colors to indicate the charge – green is a full charge, orange is between 59-30%, purple is between 29-10% and when it’s almost dead, the light will be red.

The GS tank that comes in the kit looks simple, and it is, but I think it was thought out pretty well.

Starting at the top with the drip tip, it’s more of a built-in metal extension with a sleeve over it, so you can’t use your own tip on here. But this tank is so small that you probably wouldn’t need a 510 tip anyway. It has a top fill with a sliding top cap. You have to push the button on the side to unlock it and then push towards the arrow on the side. I think they should have made it a little easier to slide open, but once you get the hang of it, it works fine. They also designed this to be child-proof and TPD compliant, so it makes sense that they made it this way. The tank is compatible with three different coils, but it only comes with two.

GS Air Mesh 0.35ohm Coil – this coil handles between 10 to 25 watts. It has a mesh coil, so it’s designed for quick response and good flavor. This isn’t a flavor chasing tank by any means, but the flavor from this coil is decent enough. You can also hit it and hit and it wicks fast and the flavor keeps up.

The GS Air 0.75ohm Coil – this coil handles between 8 to 25 watts and is made with Kanthal wire. I’ve found that this coil produces just about as good flavor as the mesh coil, but not consistently. I get 2-3 really good hits and then it struggles to wick fast enough to keep it up. So if you’re taking a couple of hits here and there, it works good, but if you take more, this coil head doesn’t work so well.

I haven’t tried the GS Air 1.6ohm Coil coil since it didn’t come in the box, but this is a new design they just added. And I think they are replacing the 0.75 coils in the kits with this one. Eleaf says that it’s redesigned to have a smaller chimney than other GS Air coils to provide a tighter draw and better MTL experience. So if you’re looking for a tighter draw, check that one out. That coil is built with Nichrome wire and designed to run between 6 to 13 watts.

For any of these coils, the average cost is about $10 for a pack of five. Because the max power of the device is 30 watts and the tank has a restricted lung draw, I think it works best with high-nicotine e-juice. I personally use 50mg salt Nic in here, but if you use 20mg regular Nic with a good throat hit, that should be satisfying too. I don’t think it works well for low Nic e-juice, but that’s just my personal preference. With low Nic, I get decent flavor, but not a satisfying hit as far as Nic-feel and throat hit goes. But if you don’t care about throat hit or use zero-nic e-juice, it would probably be fine.

And with the new tighter draw coil head, that might make this more competitive in the pod-device market.

The flavor from the tank is just okay. It’s good enough for a tiny little device like this. Overall, it’s a nice little kit that performs well and is super tiny so it’s very portable and I really like that.