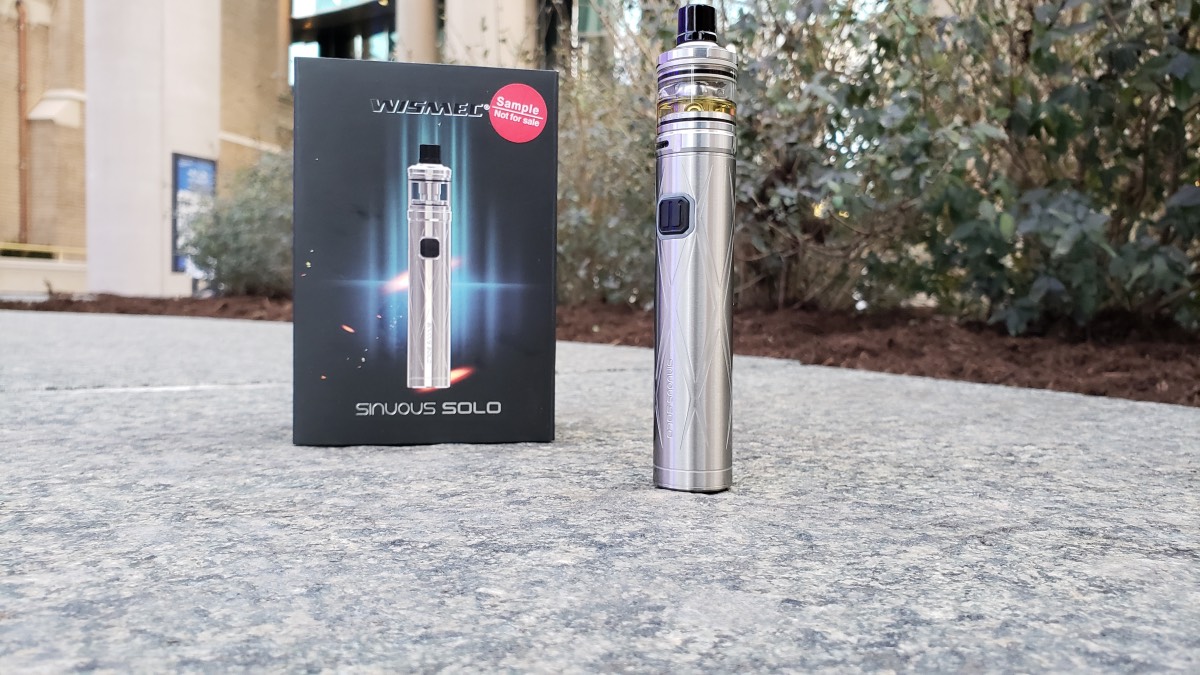 Wismec says that every detail on the Sinuous is meticulously designed. I do agree that it’s visually appealing, especially when you’re holding it in your hand. The colors and cuts on each device look very nice. It looks almost like it’s slightly bent or like it’s punched into the casing after the design is etched in and it makes me feel like it isn’t actually meticulously designed. But really that’s it. Everything else about the design looks great.

The size and weight also feel very nice. It’s a pretty slim stick device and it’s really comfortable to use. I like the button placement too.

The tank also looks fine on the device, but the designs don’t really compliment each other. I think Wismec could have made it fit more flush too. The airflow control ring sticks out just slightly and it’s not a big deal, but when I think of kits where a device and tank is packaged together, I just think it should be super smooth as if they are one piece. The battery inside the device is a non-removable 2300mah battery and you charge it using the USB charging cable included in the kit.

The Sinuous automatically enters either bypass mode or constant power mode depending on the resistance of your atomizer.

So if your atomizer is built at 0.8 ohms or above, the light around the button will turn white and it will be in constant power mode. That means you’re getting constant power, no matter how drained the battery is.

If you go below 0.8 ohms, the Sinuous goes into bypass mode and the light turns green. This basically works like a mech mod, but with regulated safety features. That just means that you get as much power as the device has charge and according to the build on the atomizer. So if you’re running a 0.8-ohm coil, you’ll get about 22 watts and it pushes more as your build gets lower, then when you get down to about 0.4 ohms, you cap out at 40 watts.

I can’t find any specs on exactly how this works, but that’s how I believe it’s working. Ok, so let’s talk about the two coils that come in the kit.

WS-M 0.27ohm Head – This is a newly designed coil head that Wismec says has maximum clouds and maximum flavor. And you’d think of course they would say that since it’s their own coils. But if you see the chart they included in the box, they do say that one of their other coils has average clouds and another one has only average flavor. So it seems like they’re trying to be honest. This is rated for best performance between 35 and 45 watts, but it’s designed to handle up to 60 watts.

As for a max rating of 60 watts, I think that’s too high. It tastes like it’s barely handling it. I think 55 is more accurate for this coil head. But really, this coil performs really, really good at 40-55 watts. Very good flavor and satisfying hits.

WS04 MTL 1.3ohm Head – this coil head is designed to run between 8 to 14 watts. Wismec claims that it has fairly good clouds and maximum flavor. Again, I would agree. The Mouth to Lung coil also has pretty good flavor and it’s also a true MTL experience. If you want an extremely tight draw or even if you want to loosen it up a bit, it works great, wicks fast, and tastes really good. The drip tip is a removable 510 drip tip, so you can use any of your own tips on here, but they will need to have o-rings on them. The tips I’ve tested fit perfectly.

The top cap slides to one side and opens up a single airflow slot. It works well and it seals tight, so that’s good. No complaints there. The one very minor complaint is that when it’s closed, it has about a 1mm overhang. It’s barely noticeable, but yeah, it’s not totally symmetrical. This is a bottom airflow tank. The airflow control ring moves left and right and feels good. There is only one airflow slot that allows you to open a wide-open airflow slot or tighten your draw down using three small holes. And one thing I really like is that if you close off that airflow completely, it’s totally closed. There are no air leaks. With the airflow wide open, you can get a nice big airy draw. If you want a tight draw, you can switch to the three airflow holes. And just moving those holes drastically reduces the airflow, so you can get a great tight mouth to lung hit from this tank. I think it’s rare for a tank to be able to do both types of airflows well, but I think Wismec did a great job with this one.

The airflow is super smooth and the airflow options are excellent. It’s a nice kit. It’s a 40-watt tube device with a mesh tank. The device looks nice and the mesh tank works very well. And the tank and device perform perfectly together. And it’s also slim and nice to carry around. So if you’re looking for a tube device with a flavorful mesh tank, and one that works great for both tight draw and loose draw, well here it is.

This was sent to me for review from VapeSourcing.com and you get it from them for about $37.35 (affilite).