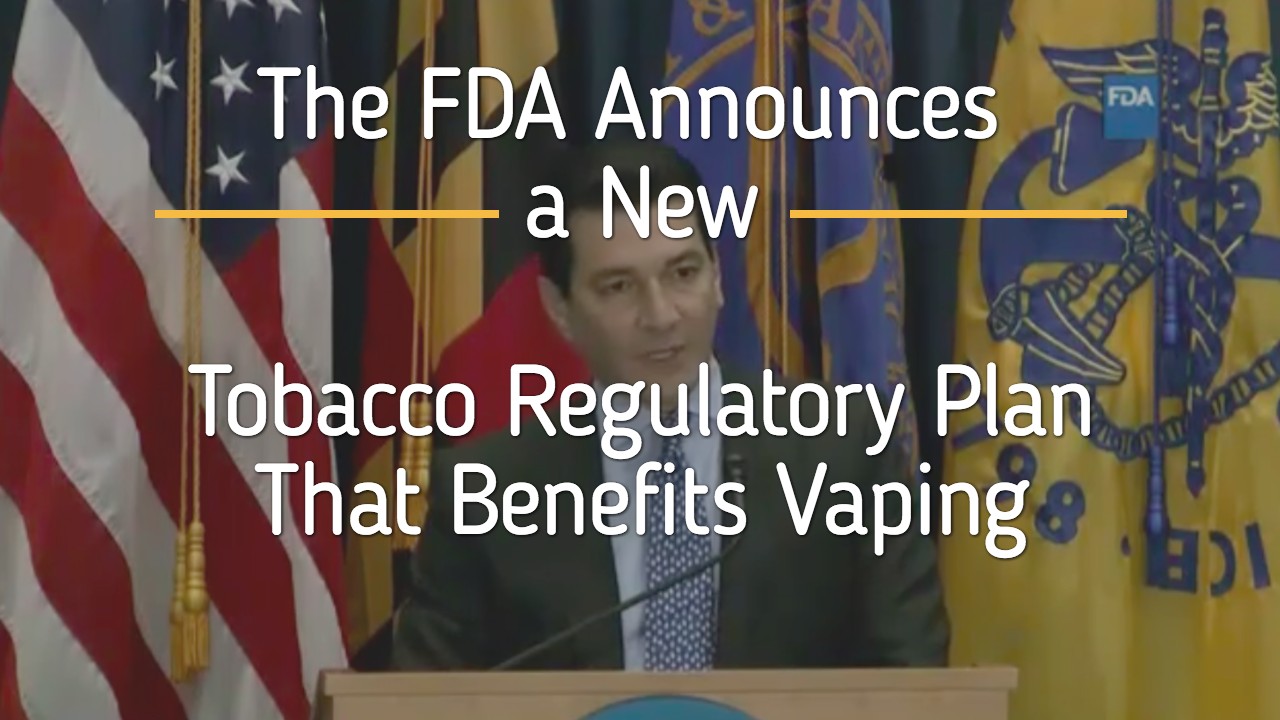 Last week, Dr. Scott Gottlieb, the newly appointed Commissioner of Food and Drug Administration, did a live on-air announcement of the FDA’s new approach to nicotine and tobacco. You can read the transcript here. The FDA also published an accompanying press release to announce their new comprehensive tobacco product regulatory plan. The focus of this new plan is mainly on nicotine and addiction, but also harm reduction, which is new for the FDA. And what’s especially exciting about this news is that Dr. Gottlieb has finally addressed electronic cigarettes, and mostly in a positive way. Until now, we had no idea how Gottlieb felt about vaping. Most of us were hopeful, while some of the more pessimistic people believed Gottlieb wasn’t going to help at all. Well thankfully, the pessimistic were wrong.

Let’s discuss all of those things.

As I mentioned earlier, none of us really knew what to expect from Gottlieb as far as electronic cigarettes were concerned. We knew that he had a penchant for cigars though, and since cigars are also newly deemed products along with electronic cigarettes, it seemed to be a potential positive for our industry.

And in Gottlieb’s speech, he finally addressed his thoughts on vaping.

He was quoted as saying “as we move forward with this approach, we must also take a new and fresh look at the non-combustible side of the house. And that is why part of CTPs task is to reconsider aspects of implementation of the final deeming rule with an eye towards fostering innovation where innovation can make a public health difference”

He later talked about how there are still things that need to be researched in regards to the safety and efficacy of electronic cigarettes in reducing harm, these products may be a solution. He also talked about how the Center for Tobacco Products will explore the benefits of new non-combustible products with an open mind.

Very early on in Gottlieb’s presentation, he talked positively about how new products are now on the market that can deliver nicotine without combusting tobacco, referring to non-combustible products like vapor products.

He spent a lot of his presentation focused on issues with nicotine addition. He noted that nicotine is by no means completely safe, but that the problem isn’t just the nicotine. It’s how it’s delivered. He pointed out that it’s the dangerous particles in combustible cigarettes and the thousands of dangerous chemicals in cigarette smoke that are the real problem.

One of the ways they want to reduce smoking rates is by exploring ways to reduce nicotine levels so that they are minimally or not addictive by reducing their nicotine levels. I’m not sure how they plan to do that with cigarettes or if it’s even possible, but something I want to point out is a key comment in this regard from Gottlieb’s live announcement – he specifically stated they do NOT plan to alter the nicotine content of non-combustible products such as e-cigarettes.

Gottlieb talked a lot about harm reduction. He mentioned several times about how he wants the CTP to look at how innovative products can help smokers reduce their risk.

Gottlieb said that they need to focus more squarely on the nicotine and that they want to take a renewed look at nicotine delivery to save lives. He said he wants a world “where adults who still want or need nicotine can get it from alternative and less harmful sources.”

One of the first huge components of this new plan that benefits us is that the deadlines for having products approved have been extended by four years. Gottlieb said that this gives the FDA time to better inform their policies and efforts.

The deadline was originally August 2018, which is a year from now. Many of us were expecting that the vape industry would shut down if something big didn’t happen before the original deadline. A lot of businesses were planning on staying open as long as they would but also planning on closing up shop when the time came. And A lot of people have avoided starting new small vape businesses due to the impending deadline.

But that has all changed with this extension.

With the four-year extension, the vape industry now has five more years from today. That deadline will still come eventually, but this gives us much more time to continue developing positive scientific research, help smokers quit, advocate for the industry, and it also allows thousands of people to keep their jobs.

Gottlieb confirmed that any current policies already in place will remain in place. That means that new products are still not allowed on the market after August 8th, 2016. Laws like age requirements, labeling requirements, child safety protections, and advertising restrictions are still in effect.

But the FDA wants to build on the current policies by further developing standards for the vape industry, some good and some not. Well, depending on how you look at it.

The FDA plans to develop new standards on battery safety and children’s exposure to liquid nicotine. We don’t know what that entails yet.

But something that has given many manufacturers a sigh of relief is that not only do they get a 4-year extension on submitting their products, but the FDA also plans to create clear guidelines and guidance on how to submit complete applications, either for Premarket Tobacco Applications (PMTAs), Modified Risk Tobacco Product (MRTP) applications or Substantial Equivalence (SE) reports.

And manufacturers will be allowed to market their products while their applications are being reviewed.

This is one of the more worrisome aspects of the new regulatory guidelines. Gottlieb stated, “I have real concerns about kids’ use of e-cigarettes, and I know many others share those concerns, especially those products marketed with obviously kid-appealing flavors.”

He stated that CTP will re-double efforts in protecting kids from ALL nicotine-containing products, which will include looking at kid-appealing flavors.

Many of Gottlieb’s statements were broad and some were hard to apply directly to electronic cigarettes. For example, he talked about the safety and effectiveness of nicotine when used in medicinal products when they aren’t attached to smoke particles in cigarettes.

But he didn’t specifically say by using electronic cigarettes. He even followed up his first statement by referring to gum, lozenges, and patches.

But he talked a lot about electronic cigarettes in his speech. He might have been referring to them in this line of thought. Does that mean that the FDA might consider classifying vapor products as medicinal products? Who knows.

What Does This All Mean For Us Moving Forward?

With the lack of support that the Cole-Bishop bill received with policy-makers and the recent loss against the FDA that Nicopure suffered in court recently, it’s still hard to believe that this new approach will change anything. But I think it’s also important to understand that a lot of the failures we’ve seen have been while the old administration was still in place or on their way out. Dr. Gottlieb has only just recently been appointed and it takes time for big changes to happen.

But I also want to point out that Gottlieb’s approach doesn’t change how states and cities might pursue their own regulations. Local governments can still propose public space bans, increased taxes, and even flavor bans like the one that just passed in San Francisco.

And vapor products are still potentially facing a nearly complete ban in 2022 when the new deadline hits.

We also still have a market freeze. No new products are allowed to come out and be sold in the U.S., even though a lot of companies are ignoring that part of the law and still doing it. I have mixed feelings on that. I think it’s good to continue innovating and bringing out products that help people quit smoking, but I also think it really sucks for the companies here who are obeying the law and suffering in sales while their competition breaks the law and reaps the rewards. Word has it though that in a recent FDA Stakeholder call the FDA plans to ramp up enforcement of the market freeze and that vape industry members have been helpful in pointing the FDA in the right direction. So that sounds like some seriously scary news for anyone ignoring the law on that front.

And fighting back is extremely important. Do you think Gottlieb would be advising the FDA to look at electronic cigarettes and harm reduction if it wasn’t for the noise we’ve been making? Hell no! A decision like that doesn’t just flip like a switch. Nicopure lost their lawsuit against the FDA, but that doesn’t mean that it was for nothing. Everything we’ve been doing to advocate for vaping has made an impact and we need to continue those efforts

The war isn’t over, but each battle adds up and this is certainly a big win for us.