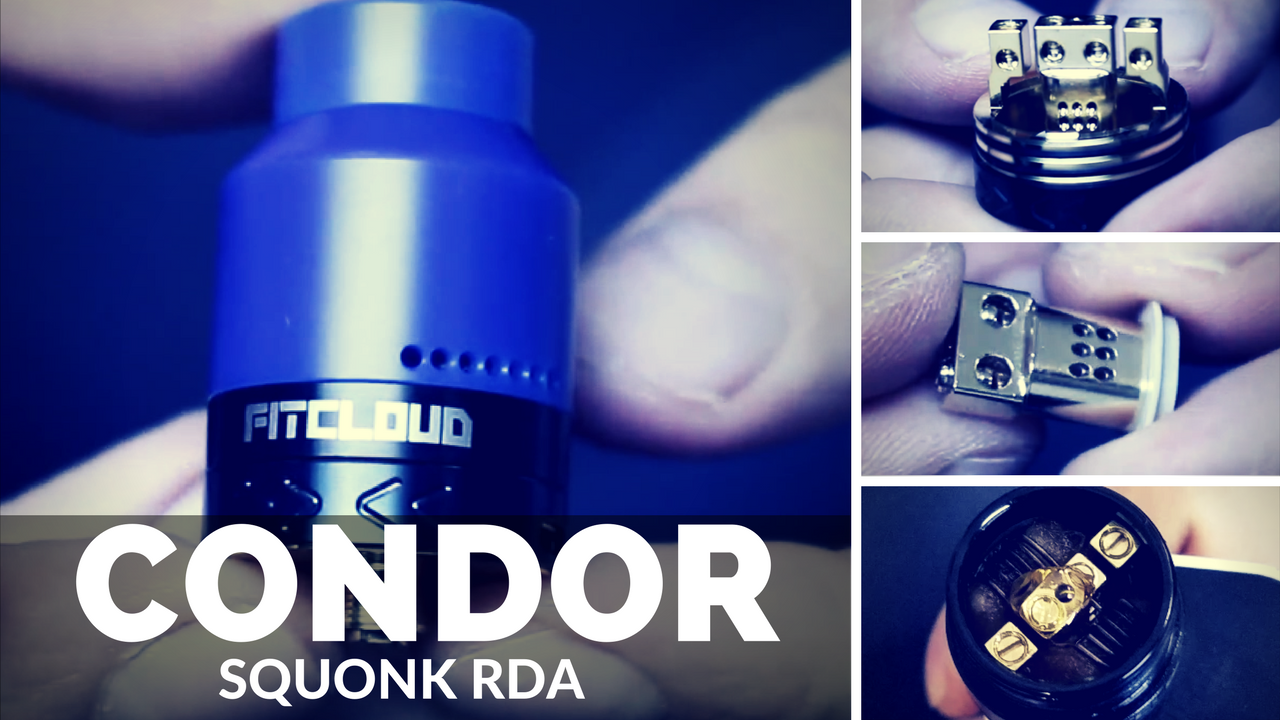 The Condor RDA was sent to me for free for the purpose of this review. It was sent to me by who I believe is the creator. She said you can buy this from VaporArtillery.com for $34.95.

The Look and Design

The first thing you’ll notice about the Condor is the design. The colors are bright and the barrel is some sort of plastic. I don’t know what type of plastic, but it seems durable. The colors might be a little much for you, but they have an all black one too. I chose the blue one because I always do black or silver and I wanted something different. But they have other colors if you don’t like this one.

Now for the drip tip, it’s an 810 drip tip made with the same plastic as the barrel. Nothing special about it. It’s a removable drip tip, which is nice because you can use a different one if you want. The o-ring on the top cap is a little loose, so that’s a bit of a drawback. I’ve tried other 810’s on here, and they are all a little loose. They don’t just fall out or anything, but I would’ve liked the o-ring to be a little tighter.

The Plastic Barrel Sleeve and Airflow

The plastic barrel is interesting because it’s more of a sleeve that covers the inside metal barrel. This really seems to prevent leakage.

The sleeve has seven small airflow holes on each side, so 14 in total, which line up with wide airflow slots on the aluminum barrel. With the bottom airflow closed and the side airflow holes wide open, you get a decent amount of airflow. And you can close those down tight if like a tighter draw. The one problem with these side airflow holes is that you can’t see where they are lined up on the base, which makes it really hard to see how many holes you have open.

As far as the plastic cap goes, I haven’t found any issues with the plastic barrel while using it and it doesn’t seem to get hot at all. It doesn’t even get warm, which is nice because that means it won’t transfer heat to the drip tip.

The sleeve slides right over the inner metal aluminum barrel. That barrel has two o-rings to hold the sleeve in place. These two pieces hold together very well. They almost just snap right together. It’s tight enough to feel secure, but loose enough to easily adjust the airflow.

The metal barrel holds onto the base of the RDA with two more o-rings. I have issues with these o-rings too. They’re just a little too loose, especially when they get a little juiced up. I would have liked these o-rings to be a lot tighter, mainly because this whole top piece comes off when I would rather just take the sleeve off to drip on it.

Ok, now let’s talk about the deck, which is very interesting.

You’ll see that it has an easy-to-use gold-plated three-post deck. It has flathead screws, big post holes, and a large deck to fit large coils. Nothing crazy there, but everything you would want. It’s really nice.

You’ll also see that it has a really deep juice well. It can hold a ton of e-juice, which is awesome.

Ok, so there are two very unique things about this RDA.

First, the squonk hole is at the very top of the middle post. This is cool because you can saturate your coils from the top down. I love this because one of the things I dislike about most squonk RDAs is that if the wicks get dry, I have to squonk to fill up the juice well and wait for the e-juice to feed up the wick to coils. But with this design, I can saturate the coils first and take a hit right away. This is a really sweet design. The only thing you need to watch for is how you’re tipping it because if it’s tipped, one coil will get all of the e-juice. But otherwise, it works great. I’ve also found that it just draws e-juice really well. One little push and a bunch of e-juice comes out.

Now, the other unique thing about this deck is these little airflow holes on the center post. This is where the airflow comes in from the bottom of the RDA. This is really cool because it’s raised up and allows you to fill up the juice well without it leaking out of the bottom airflow slots. This also gives you a lot of airflow. It’s not as wide open as something like the Goon 1.5, but it’s still quite a lot. It should be enough for most people. Now because of the positioning of this airflow, you do need to pay attention to how you’re installing your coils and wicks. You will get more flavor if you get those coils right between the side airflow and the bottom airflow holes and you also want to make sure that the wick doesn’t block those inside holes. That shouldn’t be a problem though unless you’re just jamming a ton of cotton in there.

The Bottom Airflow and 510 Pin

As for the base and bottom airflow, not a whole lot to talk about, but the bottom airflow is a little hard to adjust because it sits so close to the mod you attach it to. But it moves very smoothly, so no problem there. And the airflow slots are nice and big.

There are two 510 pins included, one solid and one hollow for squonking. They’re both slotted for flathead screwdrivers and are easy to switch out.

I think the flavor out of this RDA is really good. I have no complaints at all about the flavor. I actually think it has some of the best flavor out the various RDAs I’ve ever tried.

The overall performance I get from the Condor RDA is pretty high too. It’s easy to use, it’s comfortable, and the airflow is nice and smooth.

It has a few cons, like the loose o-rings and not being able to see how many of the side airflow holes are open, but other than that, it’s a really nice RDA.

But really, the Condor is awesome. It’s unique, has a lot of airflow, it doesn’t leak, it’s easy to build on, the deck and juice well are big, it squonks really well, and the flavor is really good.

This RDA has been out since around May and I’m really surprised that nobody is really talking about it. But it does come from a company that nobody has really heard of, so it’s probably really hard to break onto the scene. But I’d definitely recommend picking this one up. I’ve really enjoyed using it.

I was told by the owner that you can get this from VaporArtillery.com for $34.95, but I’ve seen it on other sites for less, so look around for a deal.