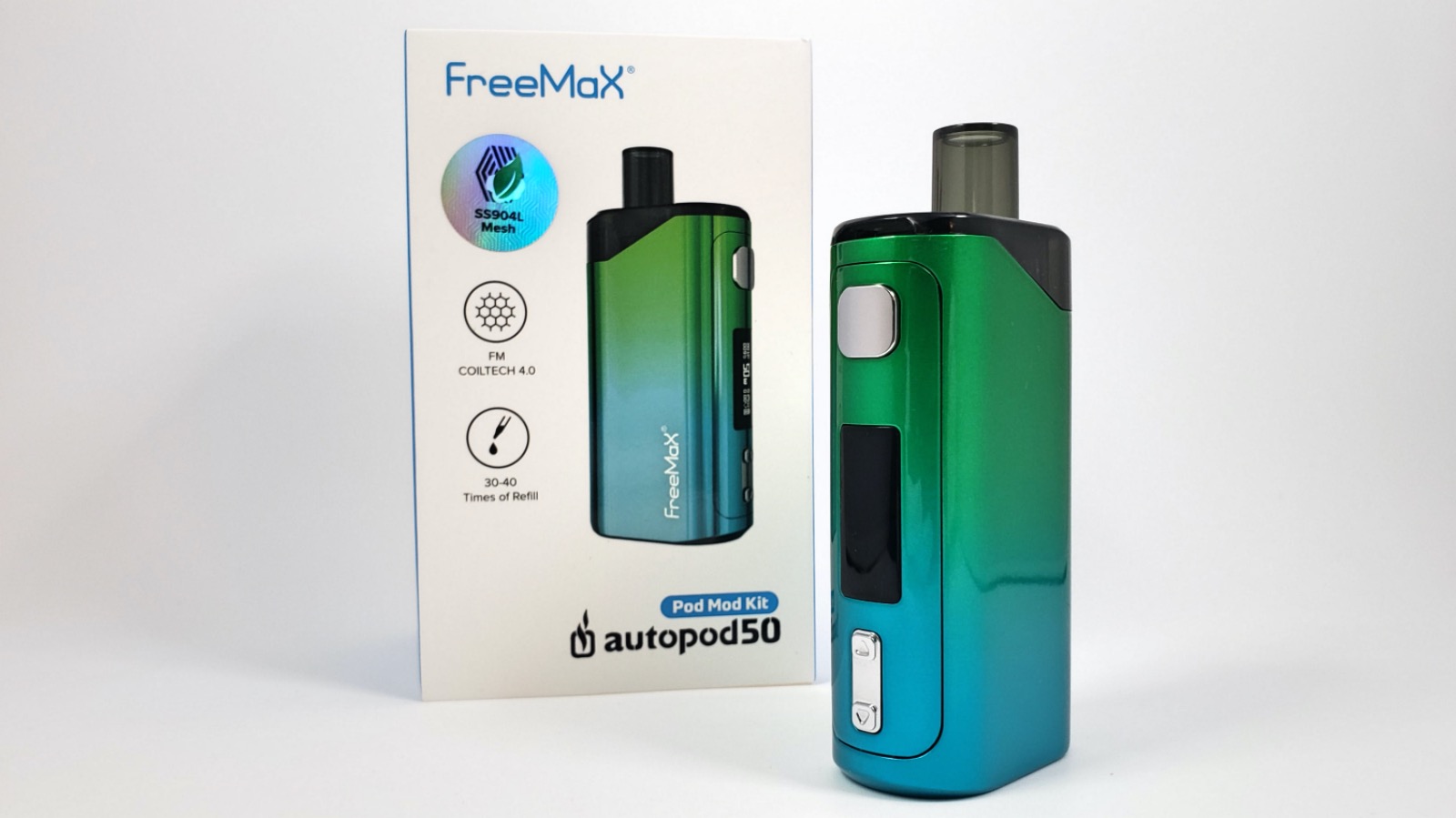 The Freemax Autopod50 was sent to me for review from Freemax. Freemax says that this is the world’s first double mesh coil pod device and that this pod system can outperform the best sub-ohm tanks in both taste and flavor. The device has a nice looking finish on it and overall looks great. The front panel has a firing button, an OLED screen, and up and down adjustment buttons. So this is clearly a pod mod type of device. Five clicks of the firing button turns it off and on.

The screen shows a puff counter, a puff timer, your wattage settings, the Ohm rating, the voltage, and a battery charge meter.

The device has a range of 5-50 watts and this is a wattage-only device so that’s all you’ll really need.

There is a menu, but there’s not much to do here. You can change your screen timeout setting, change the puff timer, and reset the puff counter. And to lock your keys, you hold the up and down button for a couple of seconds. And that’s it. One thing I haven’t been able to figure out with the Autopod50 is that every once in awhile, I’ll come back to it and the wattage has reset to the recommended setting for the coil. For example, when I was vaping the 0.25 coil at 50 watts, suddenly it was back at 30 and I had to change it again. I don’t know if this is a bug or a safety feature, for example, it might reset when the device gets too hot or if the device thinks I’m getting a dry hit. The mouthpiece at the top of the pod is a round mouthpiece, about the size of your typical 810 wide bore tip, which works great.

The pod holds 4ml, which is a lot for a pod device. And Freemax says that the coils have a range of 30-40 refills before needing to change them, which is a TON of refills. For most devices, you’d expect to get 5-8 refills, so that’s quite the difference. And with a 4ml capacity in the pods, that makes Freemax’s claims of 30-40 refills per coil even more amazing. The coils insert into the bottom of the pod and press-fit. They’re easy to install. Next to the coil insert is the silicone plug for the fill port. And while we’re on the topic of airflow…

The airflow all the open is a slightly restricted lung draw, but I think it’s a pretty satisfying draw. And you can close it down if you want a more restricted lung hit but you can’t really close it down to get a mouth to lung draw. Closing the airflow all the way down would get you an MTL hit but the device won’t fire because I think it senses a dry hit or something. But for a lung hit, the airflow works well. There are two types of coils in the box, both of which use Freemax’s FM Coiltech 4.0 system. This system uses military-grade SS904L mesh surrounded by tea fiber cotton. I’ve used these types of coils in other devices and they work great and have a lot of flavor, so they’re very good coils. These coils are quite big for a pod device, and I think that’s how you’re able to get such good performance out of them. This coil is rated for between 30-50 watts and is designed for bigger hits with more airflow. You get a lot of vapor at 30 watts and it’s a much cooler vape. At 50 watts there much more vapor and flavor and it’s much hotter too. The coil is able to keep up with constant 50-watt hits, but after maybe 10 hits or so, it does start to taste like it’s really being pushed. I never got a dry hit, but I felt like if I kept pushing it, I would get one. This coil is rated for between 15-35 watts and designed for more; restricted draws but still only lung draws and not MTL hits. At 15 watts, I think this coil would work well with high nic liquid and at 35 watts it would be good for low nic liquid. The flavor is pretty good in this coil in low or high watts but best at 35 watts. The battery inside the autopod50 is an internal 2000mAh battery. That’s a huge battery! That’s basically the battery capacity of a full-sized mod. You’re going to get a ton of life out of a single charge if you’re vaping at lower wattages, but because of the high power this device is capable of, if you’re vaping at 50 watts, you’re probably going to have to charge this throughout the day.

The battery charges with a USB-C cable using 2 amp fast charging, so it’ll come to a 50% charge in about 30 minutes and a full charge in 80 minutes. The charging port is on the bottom, so you can’t charge it standing up, which might be a minor annoyance to some people, but it doesn’t really bother me much.

Freemax is known for making great sub-ohm tanks that have some of the best flavor you’ll ever get out of a pre-built coil. The Autopod was designed to be a pod version of a sub-ohm tank and it really works like they meant it to work. It’s like one of their Fireluke tanks with a lot of flavor.

I would have liked for this to have a replaceable drip tip and maybe more features in the menu system. I also don’t understand why the wattage sometimes resets. But that’s really it for cons. Overall it’s a very good pod mod with excellent flavor.

This was sent to me for review from Freemax and you can get it from them for $59.89.