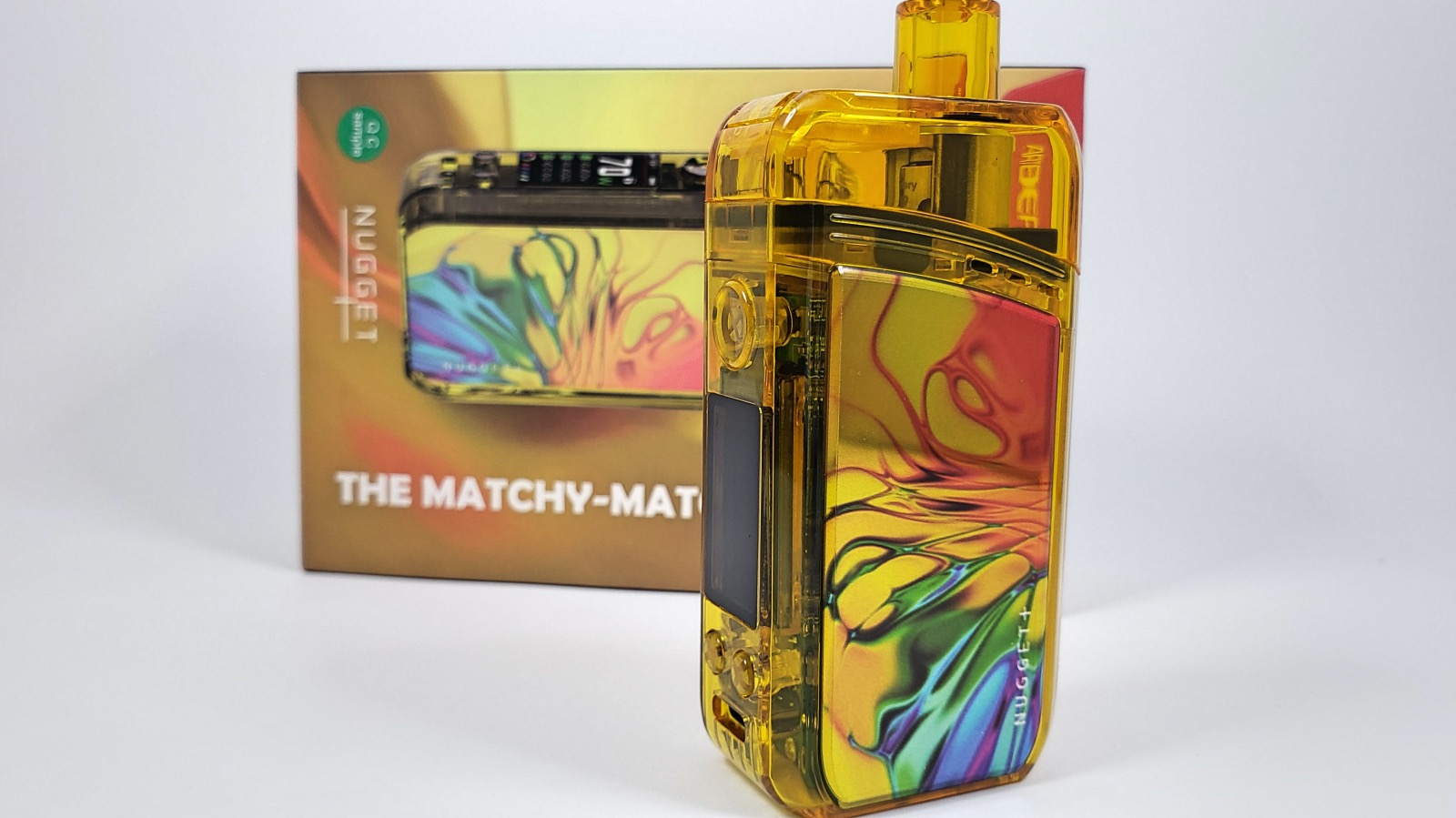 The Artery Nugget+ Kit was sent to me for review from Artery Vapor. This device is what Artery calls “The Matchy Matchy Pod Mod” which they say was inspired by the “matchy matchy” clothing trend of the fashion world. I think that’s an extremely weird claim since matching clothes is not new or a trend. I think they’re actually trying to latch on to the popular phrase Mike Vapes coined, which has become pretty common to hear amongst vape reviewers. Anyway, it doesn’t matter. The device is “matchy matchy”! The colors on Artery Nugget+ are very bright. You’ll definitely attract the eyes of onlookers with these things. They’re actually really cool. The device is made of see-through plastic, there are resin-styled panels that match the device, and then you have a bright colorful LED screen. This thing just reminds me of the clothes of the 80’s. Adding to the appeal of the device are bright LED lights on both sides of the screen. When you take a hit, they light up to whatever color you set it. You can change the colors by pressing the firing button and the “+” button at the same time.

The backlight color doesn’t always change to something bright and noticeable. For some of the colors, I can barely even see the light unless I’m in a really dark room. To turn the device off and on, press the firing button five times fast. The LED screen will turn on and show your battery charge, wattage settings, voltage, coil resistance, puff counter, and color options for the LED.

If you want to lock the buttons, you press the up and down buttons at the same time.

If you want to reset the puff counter, press the firing button and the up and down buttons all at the same time.

The Nugget+ also has an intelligent wattage setting that automatically sets the device to a safe wattage depending on whatever coil you install. This is designed to prevent you from accidentally pushing too many watts into a coil and burning the cotton. But you can turn that off if you want too, by pressing the firing button three times fast. That will let you lock or unlock the power limit feature.

That’s really it for features. There’s no menu with settings or anything like that. The pods have a non-removable drip tip, which is comfortable to use. I would have liked for this to have been a removable tip. The pod holds 5ml of liquid, which is a ton for a pod device. If you’re vaping high-nicotine, you won’t need to fill it often at all. The pods are top fill using a super simple sliding door on the top of the pod. This is nice because you don’t have to take the pod out to fill it. One thing you’ll want to keep in mind is that you can’t change the coils in the pod unless the pod is empty. The coil seals the liquid in the tank, so if you remove the coil, the liquid will pour out the mouthpiece.

Also, the coils don’t always feel snug. You have to really make sure they’re pushed in there and twist them around to be sure the o-ring is tight in place. While it’s a bit of a bummer that you have to use plugs to adjust the airflow, the different airflow options actually work really well. As you close down one hole on each side, the airflow becomes significantly more restricted. If you close them all down, you can get a pretty good tight draw for higher nicotine vaping. Artery has developed a new line of coils that fit in the Nugget+, called the XP Core Series. The whole series fits in the Nugget+, but Artery only includes two of the 0.4 Ohm mesh coils rated for 20-35 watts.

In the 0.4 Ohm coil, at the lowest recommended wattage of 20 watts, the vapor is extremely cool and doesn’t seem to have much flavor. At the max of 35 watts, the vapor gets much warmer and the flavor comes out way better. The flavor is decent, but not great. While you can vape it as low as you want, I think this coil is best vaped at 35 watts.

You can also use a 0.15 Ohm coil (60-80 watts) coil or the XP RBA coil if you want to build your own coils. The RBA head is really cool too because it also has an adjustable airflow ring built into it, which means you can really customize the airflow on the Nugget+ if you use this one.

Artery also separately sells an HP Pod, which lets you use their HP Cores series of coils. Converting From Pod to Mod The Artery Nugget+ has so much power and so many features, that it’s basically a pod mod. But you can also make it a straight-up mod too. Artery sells a 510 adaptor separately that plugs into the Nugget+ just like a pod would and that lets you screw any atomizer on top. The battery inside the Nugget+ is an internal 2000mAh battery, so you get a nice big battery in here. It charges using a USB-C cable with 2 amp fast charging.

One drawback is that the drip tip is not removable. That would have been nice. I also think they should have included two different coils instead of two of the same coils. My guess is that the included coils are really the best coil for this device and while other coils will work in it, they just don’t perform as well.

I think it’s pretty cool that Artery has released extra accessories like the HP Pod, the 510 adaptor, and the RBA coil head. You can really make it the way you want it. The device looks cool and it works well. I really like it.

The Artery Nugget+ was sent to me for review from Artery and you can pick these up for around $45.99