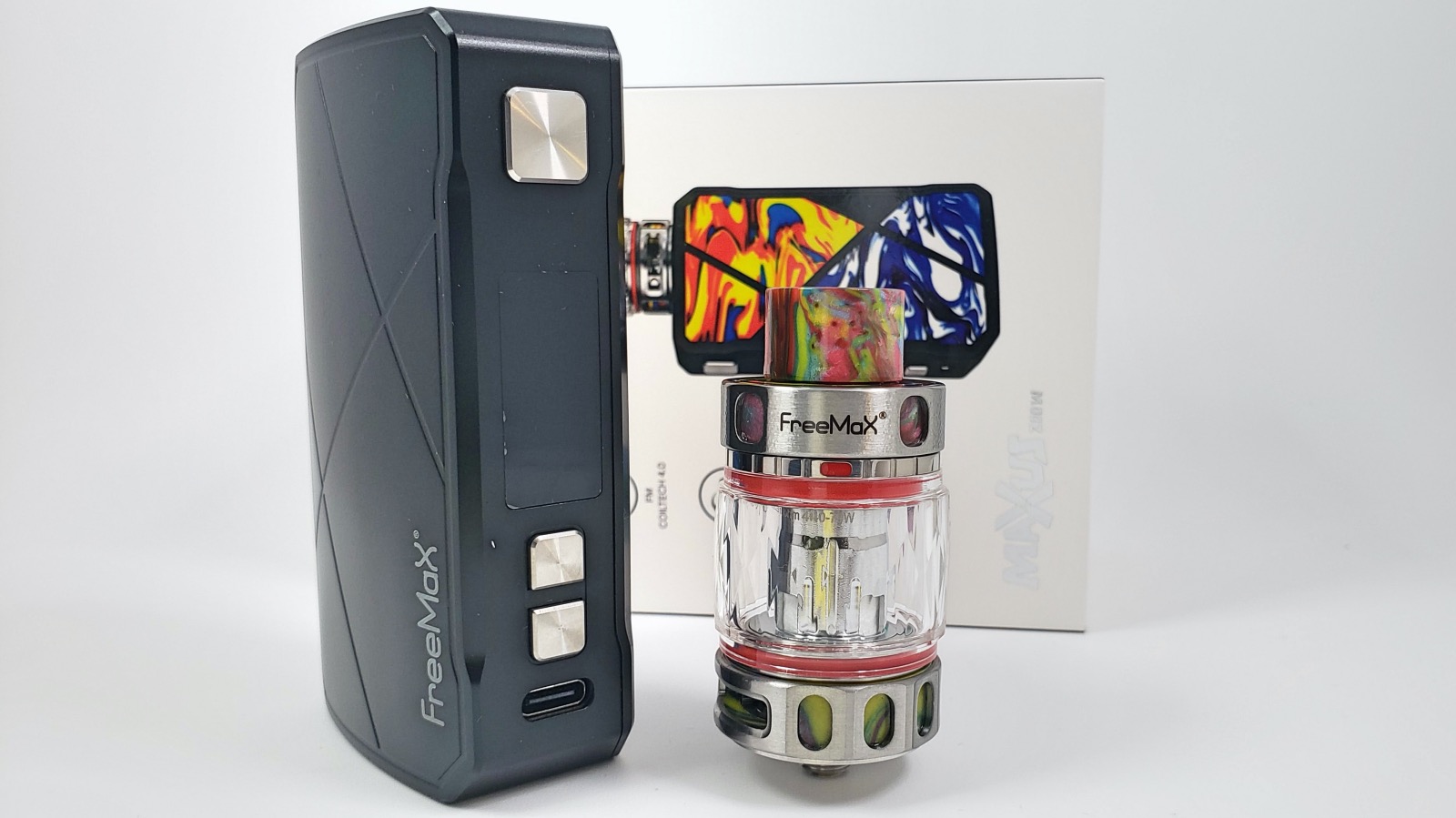 The Freemax Maxus 200w was sent to me for review from Freemax. This is a new high-powered box mod from Freemax that is just absolutely great looking. I’ve you’ve missed the boxy style of mods we had when vaping was growing like crazy a few years ago, then you’re in for a treat because this will bring back fond memories of those days. We don’t see a lot of box mods in this style anymore. This is a very boxy style like we had in the glory days of the Sigelei 150, but obviously much better looking. Today we have very sleek and curvy devices. This really makes me think of how car styles have changed. Like how the early 80’s Chevy Monte Carlo had straight edges and sharp lines, while cars today are smooth and rounded. This is the return of the Monte Carlo – a throwback to an awesome design but designed to appeal to the standards of today. One side of the device has a beautiful removable panel with a multicolored checkered resin pattern in the shape of a “Z.” The other side has the same sort of checkered design but without the resin colors. Instead, it’s simply black with a lighter-colored black “S” shape, mirroring the other side. I would have liked for it to have resin colors on both sides personally.

You have some branding around the device and on the front, there’s a firing button, OLED screen, two adjustment buttons, and a USB-C charging port. One design feature that you might not like is that the 510 is raised, so you’ll get just a little gap between the device and the atomizer. That prevents the atomizer from scratching the top of the device, so that’s one benefit of it.

Freemax also released a 100 watt version of the Maxus at the same time as this 200w model. It’s very similar in design to the 200w model just smaller. The back panel is a little different. The OLED screen shows which mode you’re in, the battery levels, the wattage or temperature you’ve set it to, how many puffs you’ve taken, the Ohm rating of the coil, and your voltage. If press the up and down button at the same time you can lock the keys but still fire the device.

To get into the menu, press the fire button three times fast. The first menu item shows your modes. Power Mode – This is your basic power mode. You can run the Freemax anywhere from 5 watts to 200 watts.

VPC Mode – This gives you custom curves so that you can set the wattage for each second of your hit.

Bypass Mode – Runs your device based on the charge of the batteries.

And the device also has several temperature-control modes, which go from 200-600 degrees Fahrenheit. You can also change this to Celsius in the settings menu.

You have three pre-set TC modes for:

TCR Mode – This lets you change the settings to use any other type of temperature control wire. There are three memory slots here so you can set it up to remember any three settings you like.

The next item in the menu is your settings menu. And the final menu item is “Info” which tells you a little bit about the device.

The Maxus also has smart coil detection, so if you insert a temp-control coil, the device will jump into temp-control mode. And if you use a non-TC coil, it will jump into power mode. That way you don’t accidentally try to fire a coil in an unsupported mode. The Maxus 200w takes 18650 batteries. One of the cool features here is what Freemax is calling SmartLoad Tech or Load at Will. With this feature, you can run either single or dual batteries and you can insert batteries in any direction because the device can recognize the polarity of the battery no matter which direction the batteries are facing. It’s a really cool feature! There are lots of safety features as well: The M Pro 2 is the next iteration of the M Pro Tank. It’s a sub-ohm tank with replaceable coil heads. The top cap also has a matching resin-style color to it at the top where the drip tip connects. To prevent leaking from the top cap, Freemax built in three steel balls to create more friction and a tighter seal when the cap is closed. To open the tank to fill it, you just slide the top cap over. The base is where your coil screws in. It has the same nice resin design in here, which is a really nice touch. And as you can see, this is a bottom airflow tank since the airflow control ring is on the base.

The airflow control ring moves really smoothly and opens up two really big airflow intake slots. You can get some huge hits off of this with the airflow wide open. When it’s closed around halfway, it gets a little turbulent, but it still works well. One thing I’ve noticed with this tank is that when I close it down to about 1/4 of the way, it sort of whistles and it seems to be because I’m hitting it with much more force. The same will happen if you hit it super hard in any way you adjust it, but it’s hard to hit that hard when it’s all the way open because there’s so much airflow. So if you vape with a lot of force, you might get a slight whistle. I don’t usually hit that hard, so it only happens to me when it’s more than halfway closed down. The coils are what Freemax calls FM COILTECH 4.0 coils, which are made with military-grade SS904L mesh and Tea Fiber Cotton for the wicks. These coils are also compatible with the original M Pro Tank if you have it. The M1 0.15 coil works well at both 40 and 70 watts. You’ll get more flavor at 70, which makes sense, but I seem to be getting pretty good flavor at any wattage on this coil. The flavor isn’t as good as something like the new Vaporesso NRG-S sub-ohm tank though. You can’t change the coils in this tank if there’s liquid in it, so just make sure it’s empty before changing the coils. The Freemax Maxus looks great, it’s powerful, has all the features you need, it fires fast, and the new SmartLoad battery feature is awesome. I really like this device. It just feels like a beast in my hand. The only thing I think I would have liked to see differently on here would be to have the back panel match the resin panel. But that’s it.

The M Pro 2 tank is a pretty nice sub-ohm tank too. It looks great in my opinion and the design fits really well with the design of the Maxus 200w. The flavor is good, although I do think the flavor could have been a little better. You can get some huge hits on it though if that’s something you’re looking for and the coils perform really well at a high wattage. The only other thing I can find wrong with it is that the airflow can get a little whistle-y when it’s closed down.

The Freemax Maxus was sent to me for review from Freemax and you can get it from them for $74.99