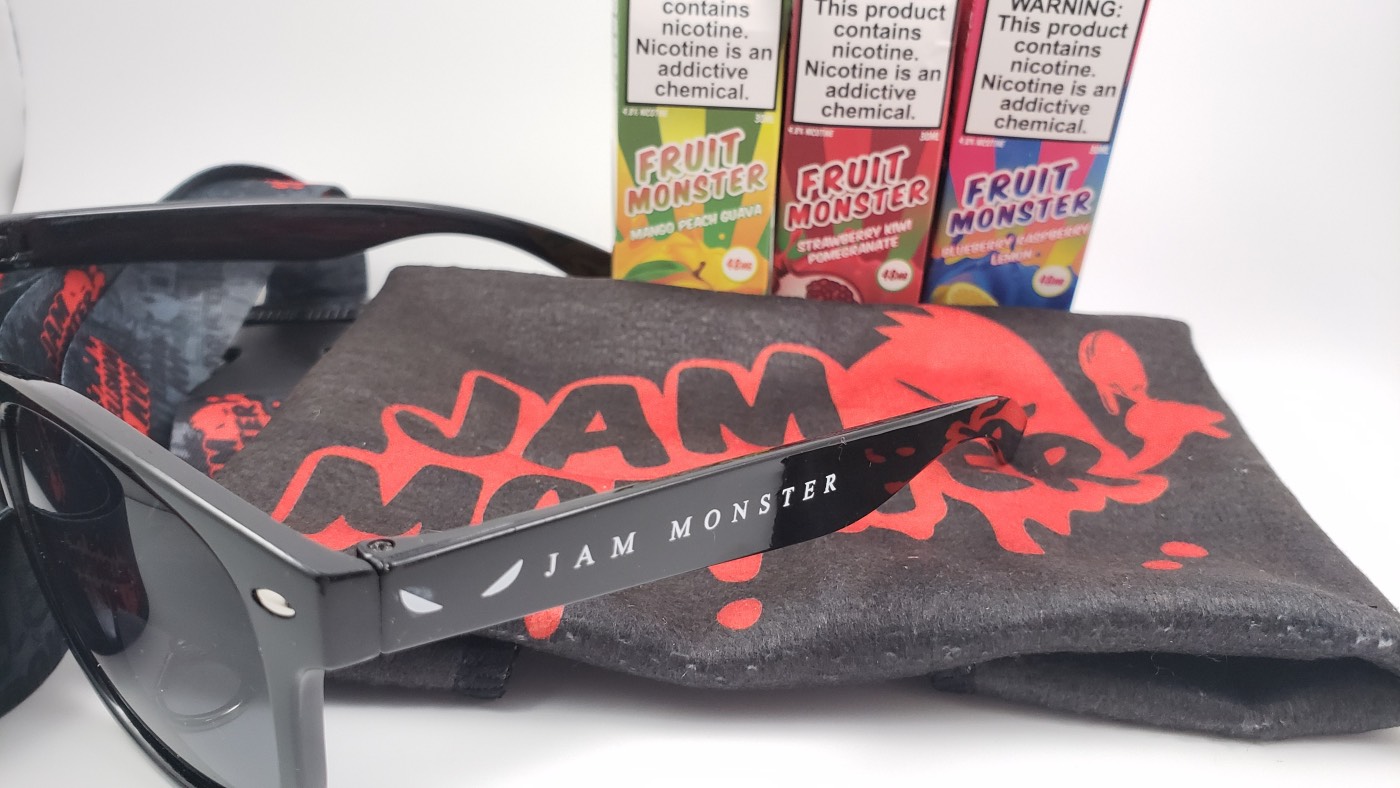 The Fruit Monster line was sent to me for review from Monster Vape Labs. This is their new line that just came out at the beginning of June. They sent me both the salt nic and regular nic versions.

The smaller salt nic bottles come in 30ml fine-tip bottles for $21.99 and come in nicotine strengths of 24mg and 48mg. These have the same VG/PG ratio as the regular nicotine flavors, so 75% VG and 25% PG. And just for reference, the salt nic they sent me is 48mg nicotine and the regular nic liquids they sent are 6mg nicotine. Monster Vape Labs describe Strawberry Kiwi Pomegranate as a refreshing burst of sweet sugary strawberry with a hint of tanginess from the kiwi and pomegranate. Regular nic: This is a really unique flavor with the addition of the pomegranate. The strawberry is there for sure and it has just a slight hint of kiwi, and then that pomegranate adds a really interesting twist to that strawberry flavor. It’s pretty good.

Salt Nic: The flavor is very strong and sweet in the lower nicotine 100ml bottles. When I take this up to high wattage, the flavor is amazing. In the salt-nic version, the flavor is the same, just not as intense. I think they did a really good job of making the flavor come out in the high-nicotine strengths, which isn’t always the case with other salt-nic brands. But overall, both are very good. Monster Vape Labs describes this as a sugary tangy mango with a touch of peach and guava. Regular Nic: I would have expected the mango to be much more prominent since there’s more of it in the mix, but it actually seems to mix equally with the guava. I get both the mango and guava strong off the bat. It’s not overpowering, but the flavor really comes out nice and sweet. It’s hard to get the peach, but it’s very light in the overall mix. Salt Nic: Right on the get-go I immediately taste that the mango flavor mixed with that very unique tanginess of guava, and then it starts to round out with just a slight bit of peach. The mango doesn’t seem to be really strong like a lot of other mango e-liquids, but the mango and guava seem to mix almost equally and I mostly taste the peach after I’ve exhaled. I really like both mango and guava, so for me, overall it’s a nice sweet smooth flavor. Monster Vape Labs describes this as a crisp sugary blueberry with the addition of raspberry and lemon to round it out.

The ingredients ratio on the bottle says that this has 50% blueberry, 25% raspberry, and 25% lemon. Regular Nic: One of the important things to note here is that this isn’t a blue raspberry, but actually a blueberry raspberry. A lot of people get those mixed up, but they’re totally different things. Anyway, so even though there’s more blueberry in this mix than the other flavors, the blueberry isn’t really prominent. Both the blueberry and raspberry seem to combine equally to make a super sweet sugary flavor. The overall flavor isn’t really strong, but it’s sweet. It’s really good if you like sweet e-liquids, which I do, so I like it a lot. The lemon is very light, but if you know to look for it, you can find it. It adds just a hint of lemon. Salt Nic: The blue raspberry is very good and it’s really smooth. There’s just a tiny hint of lemon but it’s a little hard to get. The overall flavor is actually pretty light. It’s good, but it’s mild. I would have liked for the flavor to be a little stronger. I think all three of these flavors are really good. They’re sweet, they’re good, and the flavor comes out really well in all of them.

What I find interesting about the salt nic versions of these flavors is that they’re made with 75% VG, which is pretty high VG for high-nicotine e-juice. That does change the way these e-liquids perform. That means that they might not wick as well in tight-draw MTL tanks or pods, at least not older ones that don’t wick as fast as the newer better devices. But I’ve been using them in my MTL devices with no problems. The high VG also means that they have a little less flavor than they would with a higher PG ratio, but it also means it’s smoother than a higher PG e-liquid. IT’s pretty typical for salt Nic to have less flavor than regular nic, so it’s not unexpected. But anyway, just some things to consider.

Ok, that’s it. I liked them all quite a bit. I do get a bit of a strong throat hit though and I think it’s from the fruit flavorings they use, which I get from most fruit flavorings, but it goes away after a few hits.

Alright, thanks for checking out this review and I’ll catch you on the next one!