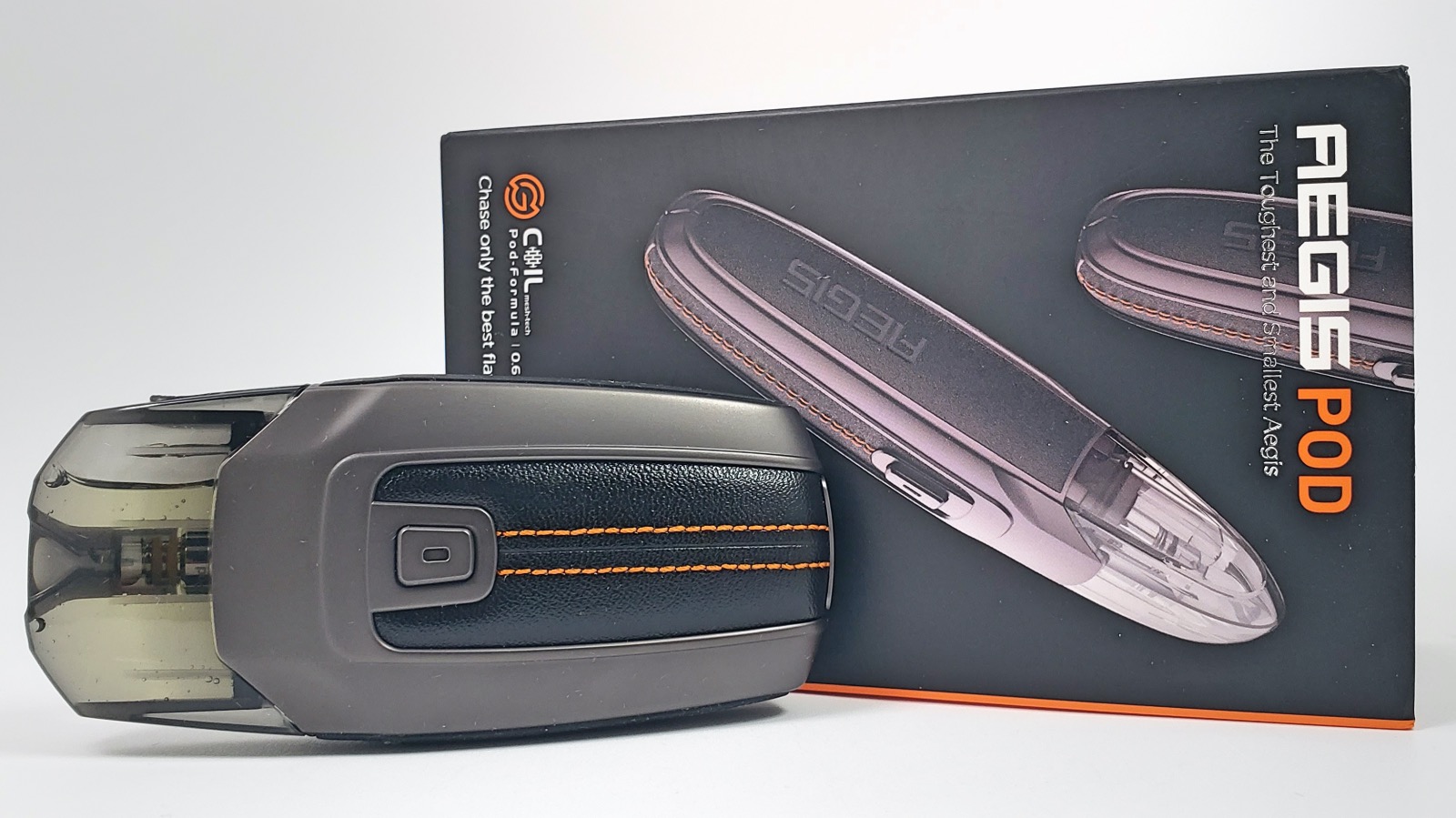 The Geekvape Aegis Pod was sent to me for review from Aegis. This is new pod system from Geekvape that looks and works mostly like a pod system, but has enough power to feel like an all-in-one device. Geekvape does an amazing job with their designs. I love that the Aegis pod has the same shape as a typical pod device, but with all the stylings of Geekvape’s Aegis line. You can just tell that this is an Aegis device, right out of the box. I love it. It has the leather grip in the middle and rubber grips on the side, so it won’t slip out of your hand.

The device is a little bigger than your average pod device, but it’s not so big that it’s uncomfortable to hold or put in your pocket. I actually really like the size because it fits perfectly in my hand, it feels very sturdy, and it allows it to hold an 800mAh battery. All good things in my opinion.

On the front of the device is the power and firing button. Five clicks turns it on and off and you hold the button to take a hit.

Like all products in the Aegis line, the Aegis pod is shockproof and waterproof. It has an IP-67 rating which means that it can sit in up to three feet of water for up to 30 minutes and it’s dust proof.

There aren’t any specs on the site to determine how shock proof the Aegis pod is, but Geekvape says that it’s designed to absorb sudden energy, evenly distribute stress, and has a thick Zinc alloy shielding for more protection. For normal drops, it shouldn’t fracture or deform. The pods are refillable and hold 3ml’s of e-liquid. As you can see the coils are replaceable in these pods. I love when pod devices have removable coils because it’s great being able to buy more affordable replacement coils instead of having to buy a complete pod. It’s much cheaper and a lot less wasteful. The coils are press-fitted so all you do is push it in tight and it’s good to use. Geekvape also included a coil removal tool in the box and you’re probably going to need it. The coils fit really tight and even with long fingernails, it’s hard to get out of there. The new coils Geekvape uses in the Aegis pod are called G.Coils, which they say is future-proof and modular. This is because these coils will be used in other upcoming Geekvape products. This is awesome, because that means you won’t have to buy a bunch of different coils for different devices. It’s great that Geekvape is looking out for the best-interest of the customer here. The coils are 0.6 ohm mesh coils made with A1 Kanthal metal. They should last about 4 refills or about 14ml of e-liquid before they start to lose flavor. I’d consider that a pretty good lifespan.

In my opinion, the flavor is very good. The flavor comes out strong.

The airflow from the pods is a little loose for me. It’s still considered a restricted draw, but I personally like a very restricted draw on pod devices. There is one thing that almost negates needing a tight draw though and it’s that the Aegis Pod has a lot of power, which gives you a lot of vapor in a small hit. And this makes the slightly looser airflow work really well. The Aegis pod holds an internal 800mAh battery, which is a big battery for a pod device. It charges with a USB-C cable, which is great to see too.

And something interesting about this charging port is that it appears to be fully exposed. So you’re probably wondering how it’s water resistant. Well that’s because Geekvape used a special coating on this port that makes it water proof. But that doesn’t mean you can charge it while it’s wet. If that port is wet, you can’t plug it in. That would be extremely dangerous, so keep that in mind.

The LED light has three colors and that tells you the charge of the battery. The Aegis Pod is water and shock resistant, it vapes great, and it looks awesome. Something interesting about the Aegis Pod is that it looks and is built like a typical pod system, but because of the amount power it pushes, it performs more like a mod or all-in-one device. Overall, I’d say it’s a great little device.

This was sent to me for review from Geekvape and you can pick one up for around $25.