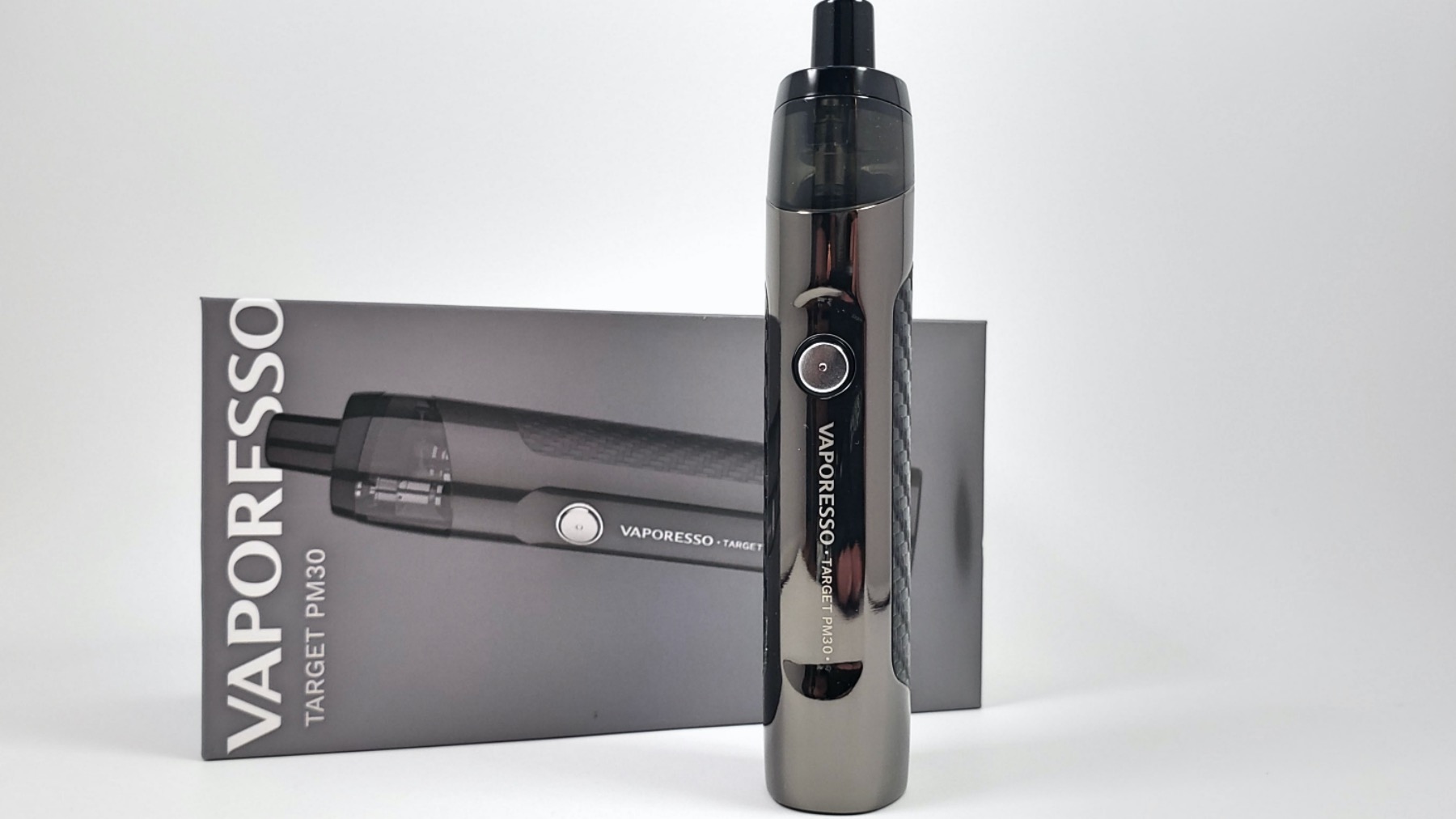 Following up on the success of the Target PM80, Vaporesso has just released the new smaller version, the Target PM30. This is a lot like the original PM80, but as you would guess, it’s much smaller and has a maximum output of 30 watts. The Target PM30 has the new style that pod mods have, which is sort of like a pod device, but boxy like a mod device. But the PM30 slims it down about as small as you could make a pod mod. The size makes the PM30 very compact and easy to carry around. The designs all look great. You can pick from marble-styled patterns of red, green, black, silver, blue, and purple.

The power button is on the front with an LED light right beneath it and the USB-C charging port is on the back.

Smart wattage automatically adjusts the wattage to a specific wattage based on the setting you’ve chosen and the coil you have installed.

Here’s how that translates:

The wattage limitations clearly point to the purpose of this device. It’s designed for low wattage, high nicotine vaping but you can also adjust it to get a slightly higher temperature for people looking for bigger hits.

And that’s it for features! All you have, and all you really need anyway, are wattage adjustments.

The pod holds 3.5ml of e-liquid, but Vaporesso also sells a TPD-compliant pod that holds a max of 2ml. The pod uses a removable coil, which is great because it reduces waste and keeps the costs of replacement coils down, so I’m a big fan of that.

The coils are press-fitted, so all you need to do is plug it in and let it soak before you vape. To fill the pod, you slide the top backward and then push the e-liquid tip into the push valve in to fill it up. This sliding cap works really well. It’s easy to push with one hand and then fill with the other.

And that valve is great for preventing leakage and for mess-free filling. The one drawback to the valve systems is that it makes it impossible to empty, so there are pros and cons to this type of fill port. The Target PM30 uses Vaporesso’s new GTX coil, which is compatible with all of the Target PM devices. The PM30 has three wattage settings and each one gives you a pre-set wattage based on the coil you use. The PM30 has a max wattage of 30 watts, but the highest it goes with any of the coils on the market now is 25 watts. But don’t let that dissuade you from using this. 25 watts goes a long way in the PM30. I get some pretty big hits on this!

The 0.6-ohm coil will be more satisfying to vapers looking for bigger and more flavorful hits, while the other coil will give you the option to switch to lower wattage hits. Both coils deliver awesome flavor.

The coils cost about $17 for a pack of five. The airflow comes in from the bottom of the pod at the back of the device.

The PM30 does not have adjustable airflow, but you get differences in airflow based on the coil you’re using. There is a clear difference between the coils too. You can’t really get a mouth to lung draw at all from the 0.6 Ohm coil. And on the 1.2 Ohm coil, you can get both a mouth to lung or a restricted lung draw. The PM30 has an internal 1200mAh battery, which is a pretty big battery for such a small device. It’ll last you a long time.

Vaporesso also uses a USB-C charging port on here and I’m really happy to see that they’ve moved on from the micro-USB they used on the Target PM80.

The USB port is also in a good spot because you can charge it while letting it stand upright. One thing to note on that though is that it seems to stand a little wobbly. I haven’t had it tip over on me, but it’s definitely not as flat and steady as it should be. The PM30 performs nearly every bit as good as the Target PM80, just in a smaller package with a lower maximum wattage. The flavor is great and it vapes awesome.

This was sent to me for review from Vaporesso and you can get it from them for about $30.