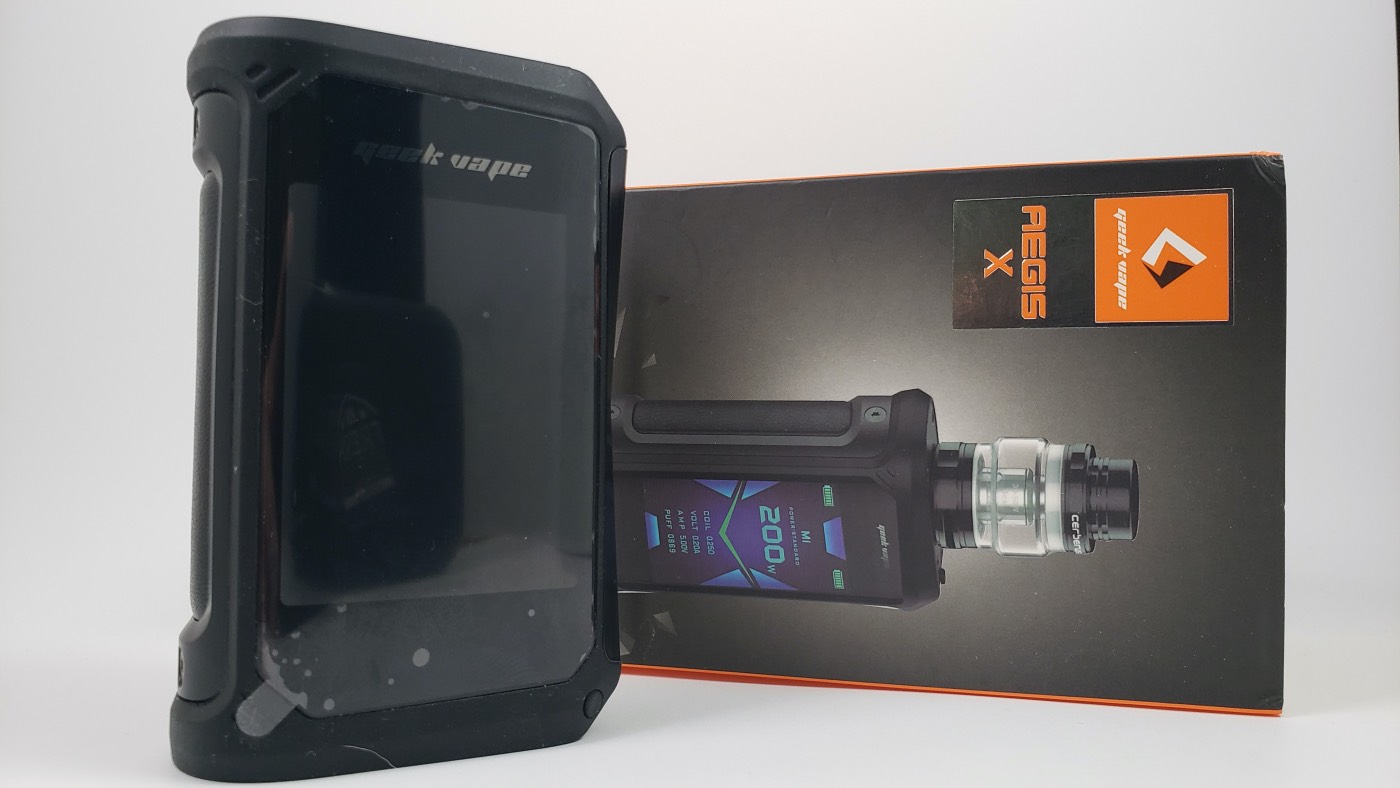 If you’re familiar with the Aegis line of devices, the Aegis X will look really familiar to you. It’s about the same size as the Aegis Legend, it has similar curves, and it has the great-looking and ergonomic grip that other Aegis models have too. The biggest difference in the Aegis X design is that it now has a huge 2.4″ color screen covering one entire side of the device.

The buttons are really strong and sturdy. They have a nice click and aren’t squishy.

Another interesting design change that Geekvape made with the Aegis X is that they moved the USB charging port to the top of the device. Having a charging port right next to the atomizer doesn’t seem to be a great place for the port, but the plug makes it waterproof, so you probably won’t have to worry about having any issues with it.

And as far as color options go, you have eight colors to pick from. All of them are black, but they have different accents and grips. You can pick from an all-black version, gunmetal & camp, silver & brown jeans, gold & black, green & black, rainbow & black, red & black, and organ and black jeans. Just to clarify, they don’t actually call the jean colors “jeans”, but that’s what it looks like to me. And Geekvape did release an actual Blue Jeans color for Aegis Legend, which looks like the same material, so I’m guessing that’s what it is.

The new screen here is big and colorful. If you hate the little screens on most devices or if you have bad vision, you’re probably going to love this.

The screen shows all of your typical things, like battery power levels for both batteries, the mode you’re in, the wattage or temperature it’s set at, the resistance of your atomizer, the voltage sending to the atomizer, the amps you’re drawing from the batteries, and a puff counter. The Aegis line is known for being extremely durable and the Aegis X is no different.

It has an IP67 waterproof and dustproof rating. That rating means that it can survive being submerged into at least 3.3 feet of water for up to 30 minutes. It also means that it has the best possible protection against solids such as harmful dust or dirt.

It’s also shock resistant. Earlier models of the Aegis devices were rated to have a Military Standard 810 G shock resistance rating, which is really good. Geekvape doesn’t mention anything about that rating on their devices anymore, so I don’t know if it’s as shock resistance as other models, but the Aegis X has at least some shock resistance, so that’s a good thing.

Anyway, if you work in a field where your vape could be dropped or exposed to the elements, the Aegis X would be a good device to consider. I haven’t tried all of the Aegis devices, but I do have the Aegis Legend, which has the first iteration of the AS Chipset. That chipset was awesome, it had a ton of features, and it fired extremely fast. The original Aegis device fired at 0.015 seconds according to Geekvape, so the AS chip probably fired as fast or faster than that.

I also have the Aegis Solo. That’s one Geekvape’s newer devices and it uses an upgraded AS-100 chipset, which seemed even faster and better than previous chips.

And now with the Aegis X, the chipset has been upgraded again to the new AS 2.0. Geekvape says it’s even faster, more accurate, more stable, and has even more precise temperature control. I have no way to test those claims, but I believe them. This chip is amazing.

And with this chip, there are three new modes; powerful mode, standard mode, and soft mode.

Turn the device off and on with five clicks of the firing button.

To get into the modes, click the firing button three times. You can cycle between power mode, several Temperature Control modes, including presets for titanium, Ni200, and stainless steel wire. You also have a bypass mode, and finally custom curves.

Once you’ve chosen a mode, you’ll also be able to pick from secondary options, if the mode has them. For example, let’s talk about power mode.

Power Mode – your typical wattage mode. You can go from 5 to 200 watts. Once you select this mode, you’ll see that you can now cycle through options like Powerful, Soft, and Standard.

Temperature Control – There are three preset TC modes that you can pick from; titanium, Ni200, and stainless steel. You also have a TCR mode that allows you to customize the coefficient if you have another type of temp-control wire you want to use.

Bypass Mode – Lets you use the device based on the build of the atomizer and charge of the batteries. It’s like a regulated mech mod.

Power Curves – This lets you set you the power of each second of your vape. If you want 200 watts on the first second and 30 watts on the next, you can do that.

You also have a few shortcut features.

If you hold the firing button and either up or down, you can adjust the brightness of the screen. It can get really bright too, so it’s a really nice feature that works well.

If you press and hold the up and down buttons, you can lock the device settings, but you can still fire it.

If you press and hold all three buttons, the device goes into stealth mode, which means the entire screen turns off. Now here’s a feature that you’ll need the manual to figure out in a couple of months. You’re probably not going to remember it.

So to get into the advanced menu, the device needs to be on, you need to be in the settings menu (so three clicks), and then you need to hold the up and down buttons for a couple of seconds.

Auto – This mode tries to figure out the best wattage or temperature based on the resistance of the atomizer. It’s defaulted to on, but you can turn it off.

Theme – This lets you change the designs on the screen. You have three themes to pick from, which is better than none! Color – There are five screen colors to pick from; blue, yellow, orange, red, and green Version – This tells you what version of firmware you’re on.

ABB – I believe this stands for Auto or Active Battery Balancing. Geekvape posted a video on their Facebook page showing how this works, but basically, it keeps your batteries at equal levels by taking the battery that has more charge and using it to charge the other one until they’re balanced. This seems like a handy feature to me. For example, if one of your batteries tends to die faster than the other, ABB will keep it balanced so that you can use the device for a little longer. You can turn this on or off.

Reset – This lets you reset everything to factory settings

If you want to set a few customized settings and save them to the memory, you can do that for up to four settings and you can do it for any mode or setting on the device. For example, M1 could be power mode at 90 watts, M2 could be TC mode 450 degrees, and so on. The battery door is on the bottom of the device and it opens up with a sliding switch. The door pops open with a spring and when it’s open, you can really get a feel for the seals and durability of this thing. It’s a heavy-duty door.

The Aegis X uses two 18650 batteries and the batteries can be charged within the device using a fast-charging cable of 2 amps at 5 volts. The USB adapter also allows you to update the firmware if that’s ever needed for some reason. Ok, and finally the Cerberus tank. Like I said earlier, I’ve already reviewed this tank so there’s no reason for me to do another full review of it. Geekvape has been including this with their kits for more than a year now, so a lot of you probably already have it. I think that’s also a testament to the quality of the tank. But if you don’t have it, it’s basically a large 27mm diameter tank with a 5.5ml e-liquid capacity. It holds a ton of liquid. It has bottom airflow and it uses mesh coils – both things that produce really great flavor. It’s top fill with a twist-off top cap, so it’s easy to fill and the coils that Geekvape makes are excellent. The tank is also compatible with Smok TFV8 coils. Smok’s coils aren’t as good, but you can use them if you want. It really is a great sub-ohm tank that uses pre-built coil heads so I don’t think you’ll be disappointed with it. The Aegis X is pretty sweet. I loved the Aegis Legend and the Aegis Solo, and I love the Aegis X now too. It’s pretty much the same thing, but with a big bright screen and more features.

That’s it! This was sent to me for review from Geekvape and you can get the full kit for $96.50.