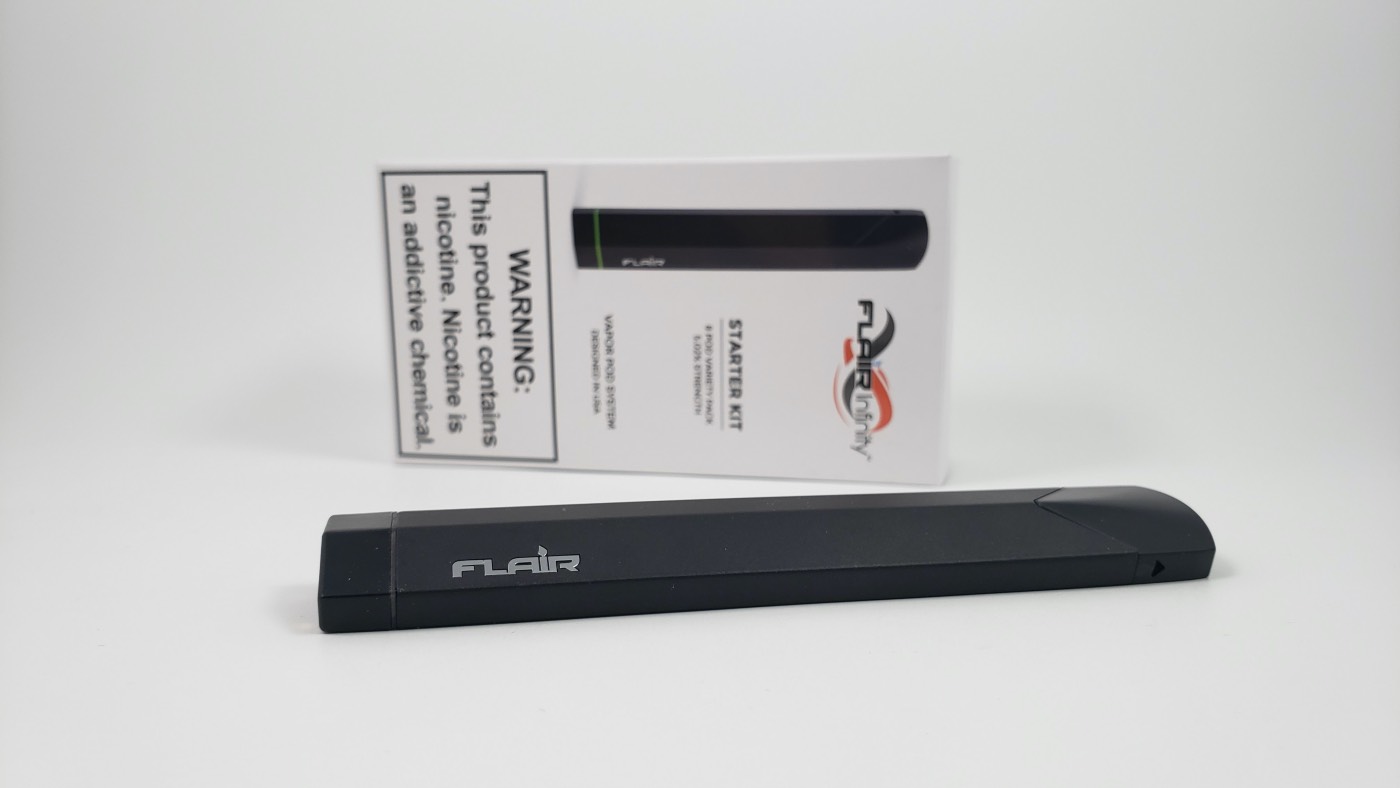 The Flair Infinity kit was sent to me for review from FlairVapor.com. This is one of those flat stick-style pod systems, very similar to something like the Juul, MyBlu, or Vladdin.

There’s not a lot you can do style-wise when designing a pod device like this. It’s not gaudy, so I like that. And it has a diamond shape to add just a little personality to it. I wouldn’t say that the design is anything spectacular, but I like that it’s simple and looks nice.

When you connect a pod or take a hit, the LED light around the base lights up. The pods are pre-filled cartridges that hold 1ml of e-liquid. They aren’t refillable, but the top can be pried off like most other pods so you could do it if you wanted. One thing I’ve noticed is that the pods don’t always sit tight in the device so you have to turn them around to fit right. The pod connection also sometimes makes it difficult to get a good mouth to lung hit, but I never have a problem taking a strong lung draw. There are 8 flavors that come in the kit, but Flair Vapor makes 12 flavors in all, so there’s a nice selection to pick from.

Their e-liquids are made with 5.02% nicotine salt, so that’s about 50mg nicotine. It’s fairly strong and it’s the only strength they make.

Virginia Tobacco – I was very surprised with the flavor this one. It really does taste like a real Virginia tobacco, minus the smoke of course. If you’re looking for a real tobacco flavor, I think you might like this one.

Blue Mint – I’m not really sure what the blue is supposed to mean here. This one tastes a lot like the menthol flavor, but with a little bit of sweetness added. It’s a good minty flavor though.

Cool Mint – The cool mint has a strong mint flavor and tastes just like a stick of spearmint gum. It’s pretty good.

Peach – This is a very light peach flavor. It’s not a sweet peach, so there doesn’t seem to be much sweetener here. It’s more a natural peach flavor. I would have liked for the flavor to be a little stronger.

Blueberry – The blueberry tastes like a light blueberry but with a hint of something else that I can’t figure out. It’s more of an artificial blueberry.

Strawberry – The strawberry flavor is a pretty good fruit flavor, more like a candy than a natural strawberry. Like the watermelon flavor, this one is a bit floral, but it’s not bad. The strawberry comes out well and isn’t overly sweetened.

The other flavors that they sell that aren’t included in the kit are: But if you want an extra or need to buy a replacement, Flair sells them for $6.99 each. The Flair Infinity has short-circuit protection, low-voltage protection, and an 8-second cutoff.

There are some pros and cons with the Flair Infinity. It’s a satisfying vape, there’s a nice selection of flavors, and I really like that the kit comes with 8 different flavors so that you can try a bunch of flavors to find one you like. I also think the tobacco and mint flavors are pretty good. As for the cons, I don’t like that it has a proprietary charger, the pods don’t always have a great fit, and I would have liked for there to be more options in nicotine strengths other than 50mg nicotine, but despite the strong nicotine, it’s not a harsh hit. And this isn’t a pro or con, but more of a personal preference, but the draw is a loose mouth to lung or restricted lung draw.

This was sent to me for review from FlairVapor.com and you can get the full kit for $34.99.