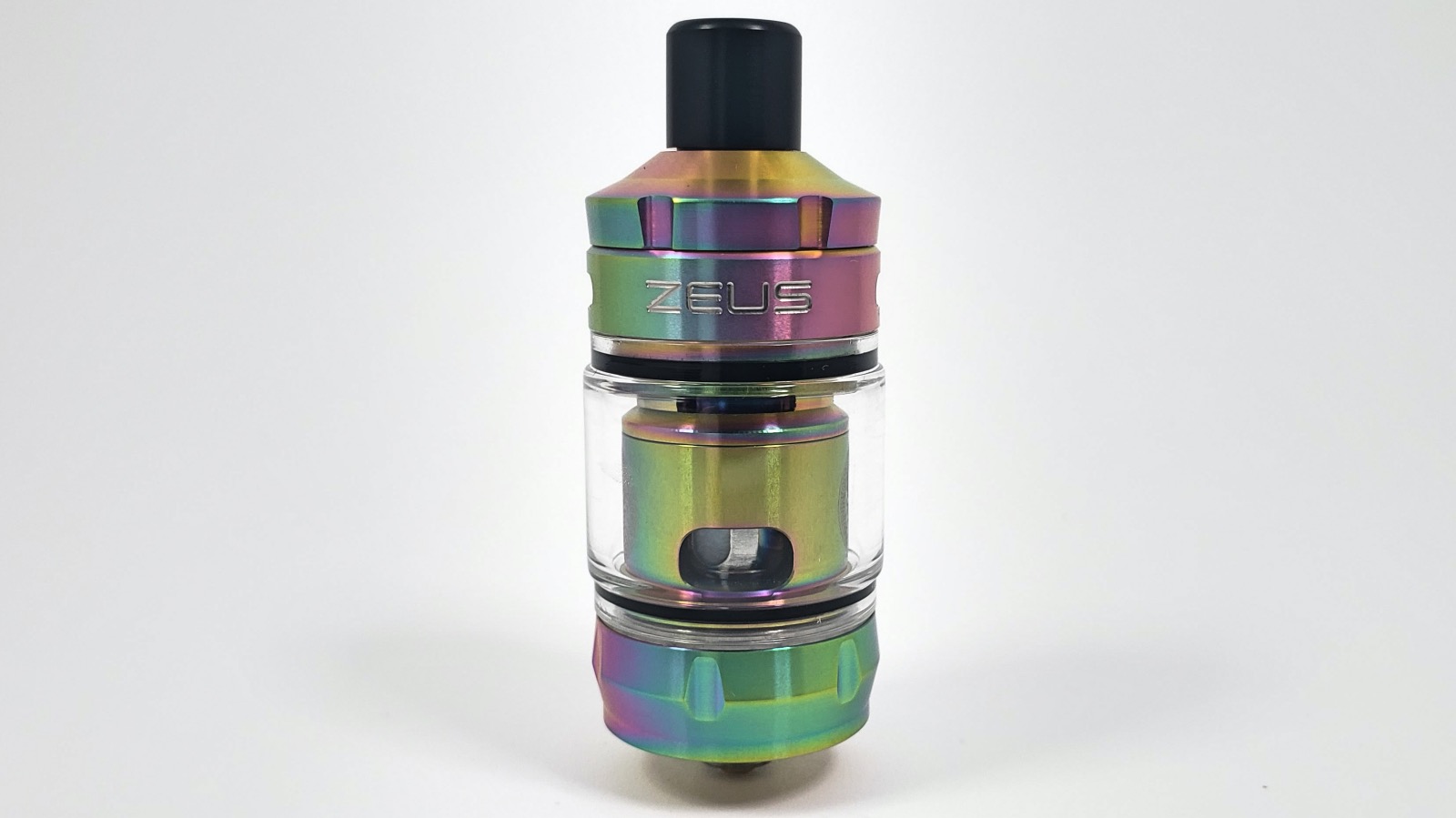 The Geekvape Zeus Nano tank was sent to me for review from Geekvape. This is a small version of the Zeus tank utilizing top-to-bottom airflow and Geekvape’s B Series coils. The Zeus Nano looks a whole lot like Geekvape’s other Zeus tanks, just smaller. Way smaller. This tank is tiny. It’s a nice looking tank with the cool Zeus design etched into the chimney-piece. But really, there’s nothing particularly different in the external design compared to the original. At the top of the tank is a 510 Delrin drip tip. It’s removable, so you can use any tip you’d like in here. You also get a spare tip in the box, which is the same as the one that comes pre-installed. The top cap unscrews from the top fill chimney section, which is basically the airflow piece. That gives you access to the liquid fill port.

The tank comes with only one size of glass, which holds 3.5ml of liquid. You get a spare tube in the box too, so that’s nice. The coil heads screw into the base and then press-fit into the chimney, or what Geekvape calls the chamber. It’s easy enough to install coils, even when the tank is full. But if the tank is full, just make sure you don’t accidentally pop the glass off the top cap. The way the airflow is engineered makes this tank leakproof. Or at least that’s what Geekvape says and what I’ve also experienced. I haven’t had any leaks whatsoever. The coil system used in the Nano is Geekvape’s B series coils.

You get two coils in the box: This coil is rated for 25-33 watts. The flavor is okay at 25 watts but seems a bit muted. It’s not strong. At 33 watts the flavor is better but still not great. But it’s decent. There’s no problems with wicking when chain vaping and I never get a dry hit. I think this coil is designed for lung hits but I feel like it would be better for high nicotine liquids just because of how it performs. It’s also a cooler vape even at the max wattage. This coil is rated for 15-25 watts. At 15 watts the flavor is pretty weak. It’s just not very strong. At low wattage, it’s designed for high nicotine and restricted hits. At 25 watts, the flavor gets significantly better and you’ll get much bigger hits. I still think the flavor could be better but it’s decent.

The tank is designed well and looks nice. I also like how tiny it is. The adjustable airflow works well too and I haven’t had any issues with leaking. The only issue that I have with it is that I think the coils should have a little better flavor. But they perform well.

So that’s it for the Zeus Nano tank. You can get it from Geekvape for $24.99 from their website.