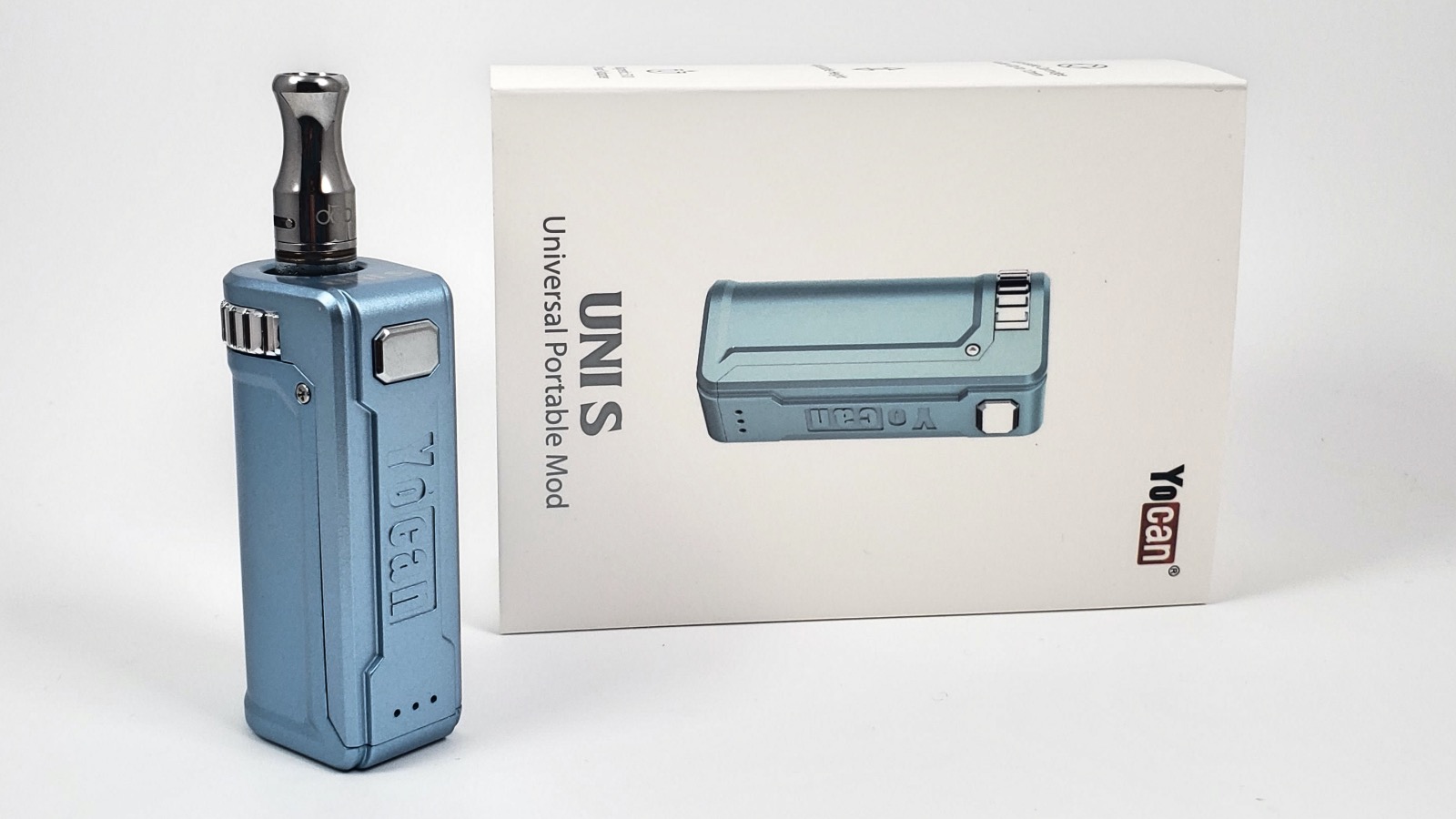 The Yocan UNI S was sent to me for review from Yocan. This is a device designed for vaping cartridges and it’s the latest upgrade to the very popular original UNI.

So let’s talk about it!

Design and Comparisons to the Original UNI First things first, the design. It looks very much like the original UNI but with subtle changes to the frame, adjustable height dial, and the firing button.

The atomizer adjustment dial is now much larger and more visible. This is nice too because it’s a lot easier to use. The original dial worked just fine but this new dial is just a little better.

The firing button the original UNI was round, while this one is more of a rectangular octagon. I wouldn’t say it’s an upgrade from the original, it’s just a new design. It’s just as clicky, which is nice. It’s also a little bigger, so that might be more appealing to you.

The frame is now inverted where you grip it which is just like the UNI Pro frame.

And now the LED lights are at the bottom of the front panel, as opposed to the top of the device above the firing button like they were on the original.

One of the biggest differences here is that the UNI S now has a metal body made of zinc alloy, while the original had a plastic body. That was actually one of my minor complaints about the original. While the original was still nice, it just felt lower quality and easy to break. This new metal body makes it feel much more durable and high-quality. And the zinc alloy keeps it light. I like it.

And there’s also a new lanyard hole, which doubles as a window to see how much liquid is in the tank or cartridge.

As far as differences in design go, that’s about it. They’re all nice design changes. The device still looks great and has a nice upgraded look to it. To turn the device on and off, hit the firing button five times fast. You have basically two features here.

Pre Heat – To turn this on, click the firing button twice fast. The pre-heat allows you to warm up your cartridge so that you thin out the oil and get a good hit. This mode runs for 10 seconds but you can press the firing button twice again to stop it early if you want. It also runs at 1.8 volts, so it’s very low and won’t overheat the concentrate.

Temperature Settings – To change the temperature presets, click the firing button three times fast. That will scroll through each setting.

And to take a hit, just hold the firing button.

Different concentrates and oils need different temperatures to give you the best benefits. The original UNI went as low as 3.4 volts and as high as 4.2 volts in the presets but the new UNI is now much lower. My guess is that user-feedback went into this decision. Maybe people found 4.2 to be too high for most concentrates.

So here’s what the presets are set to now:

I like this change because now you can use the presets for more delicate concentrates or for focusing more on flavor production.

You can tell which temperature setting you’re in by the LEDs at the bottom of the device. If you’re familiar with cartridge-based vape devices like this, you know that cartridges can come in many different lengths and widths. The UNI S supports atomizers between the diameters of 6mm and 12mm  The dial is still very cool and has this aperture-style design to it, like a camera lens. You can tighten it down as much as you need so that the atomizer doesn’t rattle around.

And with the height adjustment switch, you raise or lower the cartridge to whatever height you prefer. To insert a cartridge, you need the magnetic ring that comes in the box. Screw this onto the bottom of your atomizer and then drop the cartridge into the UNI S. Then you can use the height switch to set the cartridge to the best height for you and then turn the dial to tighten down the cartridge. It’s very simple. The UNI S charges with a USB-C charging cable, which is a great upgrade. USB-C is the charging cable everyone uses these days and it’s also much faster and more stable. And you don’t have to fumble around trying to get the cable in anymore, so that’s a big plus too.

The battery inside the Uni S is a built-in 400mAh battery. The original Uni has a 650mAh battery so this one is smaller, but so is the device. Considering how small the Uni S is, I’d say this is a pretty good-sized battery. I never tried the original UNI but I did review the UNI Pro, which was similar in function but with an LED screen and the ability to customize your temperature in 0.1 increments. Being able to adjust the temperatures so precisely is definitely something I miss here, but if that’s what you want, just get the UNI Pro. It’s only $10 more. The UNI S is more of an upgrade to the basic model and it just keeps things nice and simple. For those purposes, I think it works great.

This was sent to me for review from Yocan and you can get it from them for $39.99.