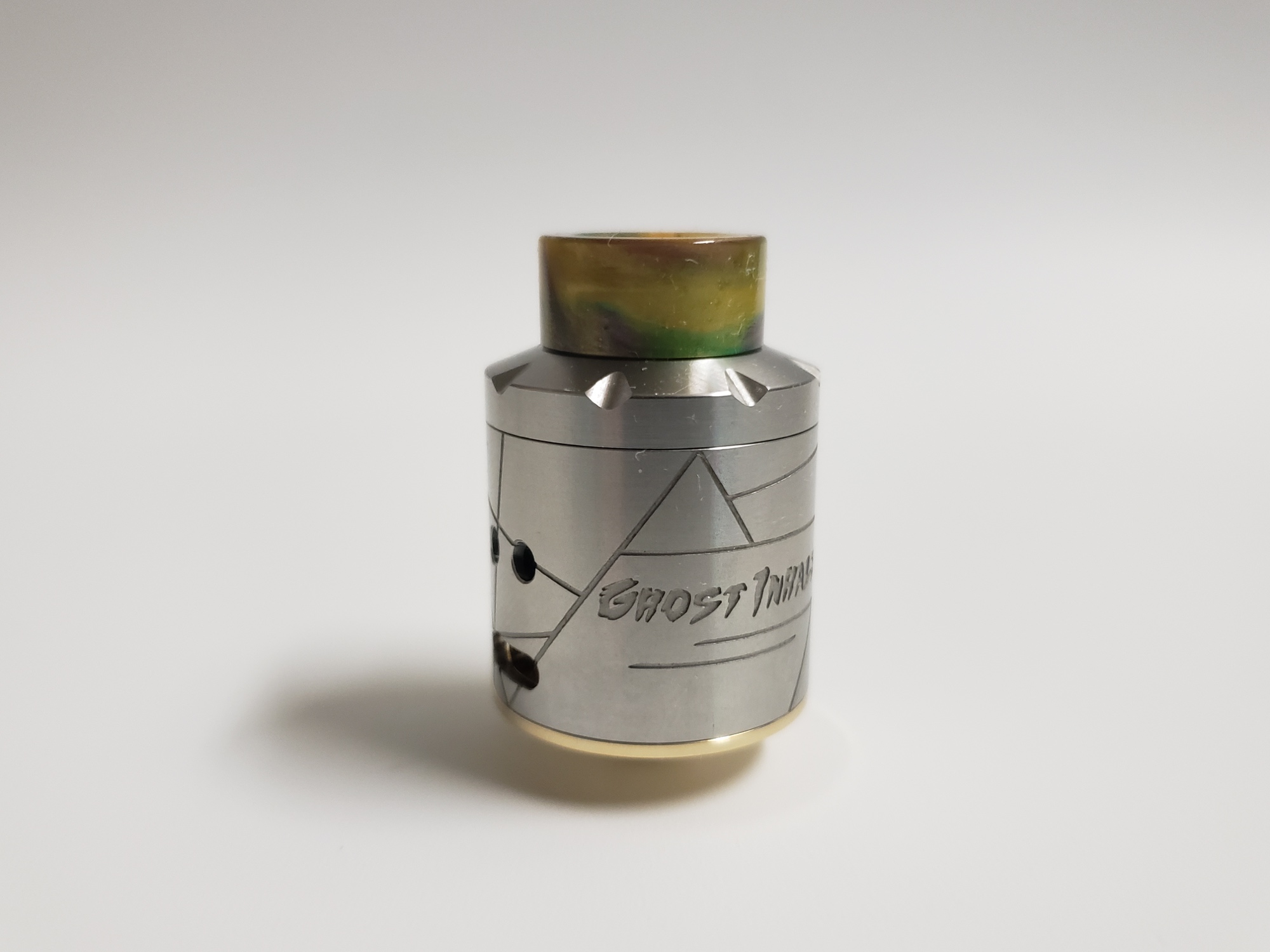 The Ghost Inhale RDA was sent to me for review from BuyBest.com. This is a dual coil RDA with a really cool clamp system and massive airflow. So let’s talk about it.

In the box you get:

The design and looks of the RDA are nice, at least to me. The cap looks good, the drip tip looks good, and all of the etching looks nice to me too, but obviously, that’s all personal preference. The machining of everything on here is good too. Nice resin 810 drip tip, with a short stem and nice marbling. The drip tip itself doesn’t have an o-ring so it’s held in place by the top cap. The top cap has indentions on the outside, but it’s mostly for the design, not function. The indentions are so high up on the top that they don’t really help with grip for turning the cap. You can dig your fingernails in there to turn it, but it’s hard. The cap is conical on the inside, which should help with flavor.

First, the top cap to adjust the airflow is really tight and hard to move, so that’s a drawback, You can ease it up with a little e-juice but it’s still pretty tight on the one I have. Ok, so the barrel has three airflow ports on each side. It’s kind of like a face, two eyes, and a mouth! 😉

The two holes on each side of the barrel draw airflow directly onto the side of the coil, while the two larger slots direct airflow to the bottom of the coil.

With all of the airflow holes wide open, you can get a massive amount of airflow. You can also shut down just one hole on each side or you can shut down one or both holes on just one side, allowing you to use this in single coil mode.

But if you want to go single-coil, there’s a problem; the bottom airflow slot on the closed side will still be open, so it will still draw air from that side. You can close off the bottom airflow completely, but not just on one side. So that means if you want to run a single-coil, you can only use the side airflow, and it has to come in from an angle instead of directly hitting the full coil.

I thought you might be able to flip the barrel, but that doesn’t work either because the side airflow holes aren’t directly in the middle of the barrel. So basically, this is a dual-coil only device. Avidvape made a pretty big design flaw there because not only can you not do single-coil, but it also makes the option of closing one side of the barrel pointless.

Ok, now about the bottom airflow slots. You can close those down as much as you want, but like I said, there’s no way to use just one. These provide a good amount of airflow and it’s where most of the flavor comes from, so it’s best to keep these open.

If you want the best flavor, I’ve found that closing the side airflow entirely while keeping the bottom airflow open works best. That does cause you to restrict the airflow quite a bit though, so if you can sacrifice flavor for more airflow and bigger hits, you have the option. The deck is gold-plated, it looks really nice, and it’s pretty deep, so it holds a good amount of e-juice. The Ghost Inhale RDA has a unique deck design with the way it works. So it has two posts and at the top of the posts are post holes to screw down your coils. Then at the bottom is an insulated clamp post system. If you turn the screw in the middle of the deck, it opens up the clamp so that you get your other coil legs in there. This design makes the deck really easy to build. The best way I’ve found to do it is to position your coils how you want them, then tighten them down from the top first. This holds them in place and then you can make some minor adjustments and tighten down the clamp. It’s really easy.

I’ve experimented with the positioning of coils and using different sizes and I haven’t found the flavor to change. I even built some huge 4mm diameter coils so that both airflows would be forced to hit the coils and the flavor is still the same. I think you get the best flavor with the coils as close as possible to the bottom airflow holes, so do that no matter what size your coils are. It has a PEEK insulator and gold-plated 510 pin and that’s it for the deck.

The Ghost Inhale RDA is squonk-compatible, so if you love squonking, this will work for you. It squonks nicely and plenty of e-juice comes out. You’ll notice that the squonk post is quite a bit raised, so it doesn’t suck up e-juice if you overfill. That’s important to note because you can fill this thing up and have problems with leaking out of the side airflow holes. As long as you’re careful, it shouldn’t be a problem.

That’s about it for the Ghost Inhale RDA.

There are some pros. It’s machined well, it’s really easy to build, it looks nice, you can really customize the airflow to whatever you prefer, even for massive clouds. It’s also really cheap at around $17 to $25 from what I’ve seen online, so that’s a big plus.

There are some cons too though, for example, you can’t close off the bottom airflow, you can’t use single-coil even though it looks like it’s designed to be single-coil compatible, it has loud airflow, the top cap is hard to turn, and the flavor isn’t amazing, but it’s decent.

But overall, it’s a decent RDA and like I mentioned, the price is really good. You can get it from BuyBest.com and they also provide a three-month warranty and free-shipping worldwide for orders over $20.