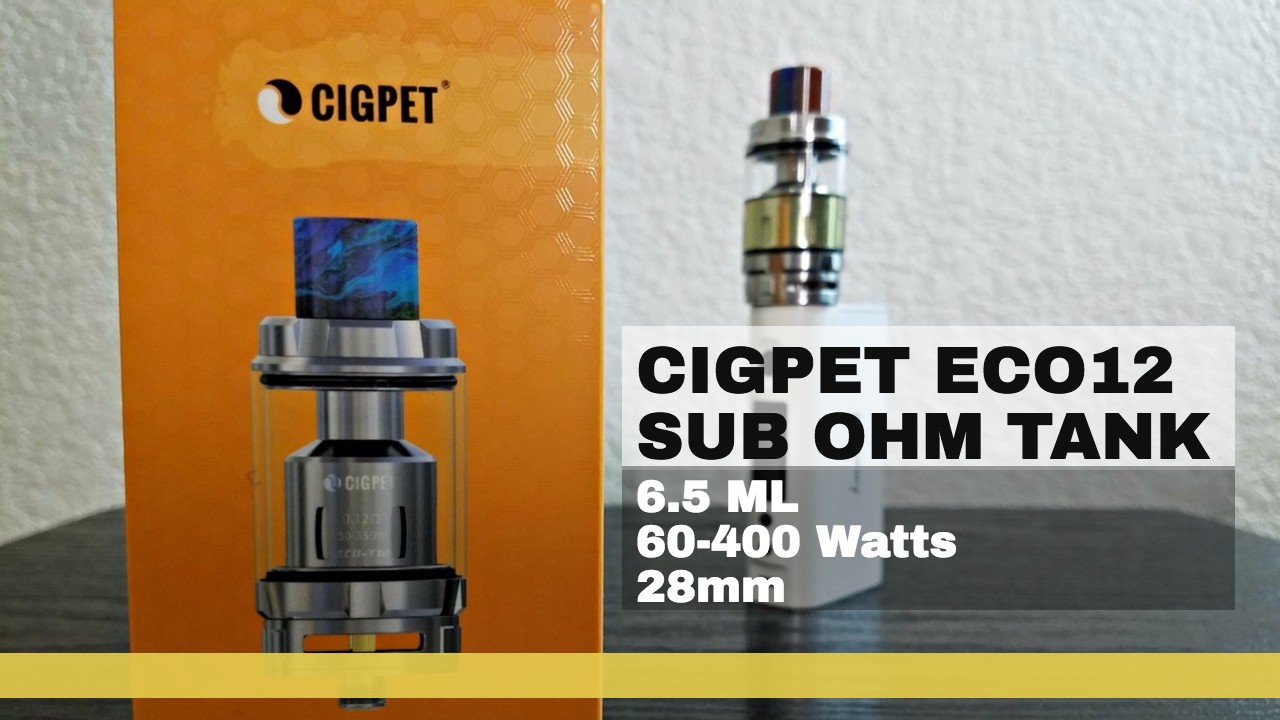 The Eco12 Tank comes from a company named Cigpet (a sister company of iJoy). I received the ECO12 from HeavenGifts.com for the purpose of this review. I’ve been using this tank for nearly 3 months now and I’m finally ready to talk about it.

What’s In The Box

The machining on here is very nice. The threading is smooth, everything fits together well, and all of the parts seem very durable. I haven’t found any manufacturing problems in the time I’ve been using it, which has been well over two months now.

This is a sub-ohm tank designed for flavor and massive clouds, which means this tank needs a lot of airflow, and that it does. There is a ton of airflow if you want it, but you can also reduce the airflow to a restricted draw if that’s what you like.

The Eco12 comes with with two coil heads:

I’ve used both coils through their full life.

The T12 coil, which is the 0.12 ohm coil that can handle up to 350 watts, works great. The highest wattage device I have is 200 watts and the coil handled it perfectly. It’s a hot vape, but you’ll get massive clouds, and in my opinion, really good flavor too.

The Q4 coil handles up to 180 watts although I felt like it could barely handle 180 watts and wasn’t wicking as well as it should. Just barely though, let me emphasize that! It did very well at 180 watts, but I could sense that it wasn’t wicking as well as the T12 coil head. If you don’t vape at high temperatures, you probably wouldn’t notice a big difference between the two, but it does seem like the T12 has slightly better flavor output.

There are also two other types of coils you can buy

I haven’t tried these coils and I don’t have a device that can push 360 or 400 watts, so I probably never will try these coils. I don’t know if there are even any devices on the market that can actually fire above 300 watts reliably. But these coil heads have a ton of coils within them, which might translate to better flavor at really high wattages.

Another cool feature is that you can use SMOK TFV12 coils in this tank and vice-versa.

There is also an optional rebuildable RTA deck, but it doesn’t come with the tank. I was a little disappointed about that, but from what I understand, the reason Cigpet didn’t include is that it keeps the price down. Since not everyone uses rebuildable decks, they figured that more people would be interested in the tank at a lower price range and for anyone who wants a deck, they can buy it later. I’ve seen the deck in various places for around $10 to $20, so that’s not too bad.

I actually like the Eco12 tank so much that I wanted to be able to use it indefinitely (you never know when a company might stop manufacturing coil heads), so I actually did buy the RTA deck. It’s a really interesting deck that allows you to install either two coils or four coils. Four coils in an RDTA is not a common feature in rebuildable tanks, so that’s pretty cool.

I ordered the RTA deck long after getting the ECO12 tank so I haven’t had a lot of time experimenting with it, but I have some initial thoughts.

My first build was a quadruple coil build with regular round wire builds. The problem I’ve found with this is wicking since four coils require a lot of cotton, which is hard to stuff into the wicking holes. You might be able to fix this by building smaller diameter coils that use less cotton.

Then I installed a dual coil Clapton build, which performed great. The flavor was pretty good and it wicked much better, but neither of these builds had as much flavor as the T12 coils.

And one big drawback that I’ve found with the RTA deck are the post screws. Basically, they suck. They don’t stay tight. It’s worse on the single round wire coils because there’s less wire for the screws to grab, but they aren’t so good on the Clapton coils either. It’s hard to get the screws to stay down tight and they tend to back out. I started to strip the screws just trying to get them to hold the coils down.

Unfortunately, I have to say that the RTA deck is not very good.

Ok, now onto the drip tip. The manufacturing process of the resin drip tip makes it so that every tip is unique. You won’t know what color you’re getting until you open the box.

That’s a bit of a drawback because you might end up with a color that you don’t like, which is what happened to me. I don’t like the colors of the tip that I got.

I think it would’ve been cool for them to include a plain black non-resin drip tip for anyone that doesn’t like their resin drip tip.

But it’s amazing how much a drip tip can affect the experience of vaping.

This is the first time I’ve ever used a resin trip tip and I love it. It’s smooth and feels great on my lips. It doesn’t get hot and doesn’t attract gross lip gunk either.

I didn’t like the way the drip tip looked on this at first, but now I don’t even care. The experience I get from it far outweighs how it looks. And you might even get a drip tip color that you like. And if you don’t and the looks really bother you, you can order more drip tips for pretty cheap. I saw them in packs of 5 for about $20.

I like this tip so much that I want to buy resin tips for all of my atomizers.

How Does it Look?

This is a huge 28mm tank, which is quite the difference compared to the 22mm tanks that were the standard in early 2016 and prior. That means if you have a smaller device designed for 22mm atomizers, this tank will look pretty funny. But if that doesn’t matter to you and you’re all about functionality and e-juice capacity, you’ll like this tank.

I’m not a big fan of how the tank expands outward from the deck. I just think it’s a little funny looking. But you might not mind. And the performance that I get from the tank far outweighs that minor issue.

The 6.5ml juice capacity is one of the best things about this tank. You won’t have to fill the ECO12 tank very often. And I’ve seen some reviews say that it holds up to 7ml. I haven’t tested that myself, but that’s what I’ve heard.

Ok, let’s talk about performance. Like I mentioned earlier, the airflow is massive. And that airflow is super smooth too. I don’t know how to explain that smooth airflow, but it just seems like it flows right through the coil very efficiently. I really like how the airflow feels in ECO12.

With coils being able to handle up to 300 watts, you can get some massive vapor out of this tank, if that’s something you’re looking for. And I think the flavor production is really good too, even at those high wattages.

I haven’t any issues with leaking whatsoever, which is really nice. Even after filling the tank with the airflow holes open, which many tanks are not able to do without spilling everywhere.

This is a high-wattage sub ohm tank that will probably mostly appeal to experienced vapers who like to vape at high temperatures. The performance the ECO12 is amazing and I am a huge fan of it. And at around $20, it’s worth buying.