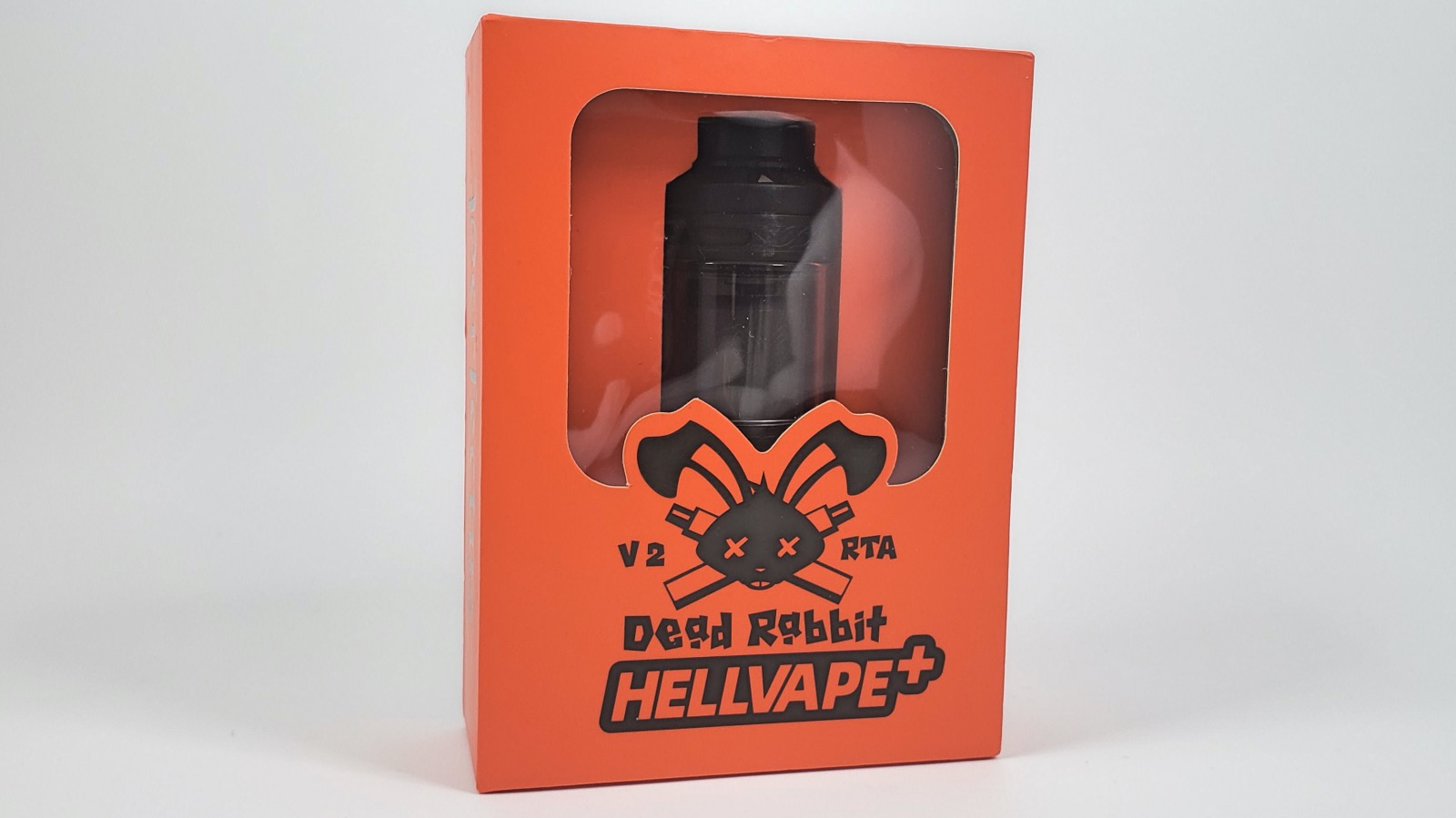 This was sent to me for review from HealthCabin.com. The Dead Rabbit V2 RTA is the latest version of the Dead Rabbit RTA made in collaboration with Hellvape and Vaping’ Heathen. I never tried the V1, so I can’t tell you how they compare, so I’ll just tell what I see with this one and what I think about it. The Dead Rabbit V2 RTA is a great looking 25mm tank with some nice etched designs on the top cap and base. From what I can tell, this is an Irish Celtic knot pattern, which makes sense since Heathen is very proud of his cultural background. I think that’s really cool that he was able to add this little touch to the tank. And it looks really cool.

On the chimney section, you’ll see the Dead Rabbit symbol.

Another nice touch you’ll find on the outside of the tank is an insulation plate on the bottom of the deck. This insulates your mod from the heat generated by the RTA. It also prevents your device from being scratched.

The drip tip is just an average 810 drip tip. There’s nothing special about it, which is a bit of a bummer. I would have expected something a little nicer on this tank. But it works and it’s removable, so you can put whatever you want on here. The top cap slides in the direction of the arrow on the top and opens up the liquid fill port. It’s a big port and easy to fit any sized bottle tip you might have. The top cap unscrews and gives you access to the airflow control ring, which also comes off and makes it easy to clean all of these parts, which is really nice.

The airflow control is at the top of the tank, which further minimizes any leaking you might get. The airflow ring moves left and right and gives you plenty of airflow. The airflow comes in through these intakes at an angle and goes straight down into the diagonal honeycomb airflow holes on the chimney, hits the coils, and goes up to the drip tip. The V2 has a chimney section with a honeycomb airflow intake that comes in from a top diagonal direction, which is designed to give you better flavor and to minimize leaking. The airflow cap will lock into place over the deck so that it’s always in the right place.

The airflow is pretty good. It’s definitely designed to give you some big lung hits. The build deck is a lot like what you’d expect if you’ve used any of the previous Dead Rabbit atomizers. The deck posts are in what Hellvape describes as a Y-style “Rabbit Ear” design. This is a great deck design because it makes it very easy to build. All you do is drop the coils down into the posts and then cut the legs from underneath. The post holes are large square-shaped holes, so you have plenty of space to fit some big coils in here. Earlier versions of the Dead Rabbit deck were T-shaped and while it was still a great design that made cutting coil lets easy, this new Y-shaped deck makes it just a little easier to reach in with some wire cutters to cut the legs. When putting in the cotton, you want to cut it so that the cotton reaches the bottom of the deck. So you’ll need to drop the cotton down through the wicking channels and touch the base. You might need to thin out the cotton a bit so that it’s not too tight and can’t wick properly.

The flavor is decent but since this is rebuildable, it’s subject to my own user-error in building it. For example, one time I tested this right after testing the Wotofo Profile RDTA and the flavor wasn’t even close. It’s decent though. I remember a lot of people saying that the original whistled while vaping it and this one doesn’t seem to have that problem, which might be because of the new airflow on the chimney, so that’s good to see fixed. This has been a pretty good tank. It’s easy to build, the airflow feels good, and while I think the flavor could be better, it’s still pretty good. The tank does get really hot though so it’s good they included that heat insulation plate. They almost have to with how hot it gets. So that’s one issue with it.

This was sent to me for review from HealthCabin.com and you can get it from them for $20.87. You’ll see a higher price on their site if you’re not logged in, but after logging in, the price drops.