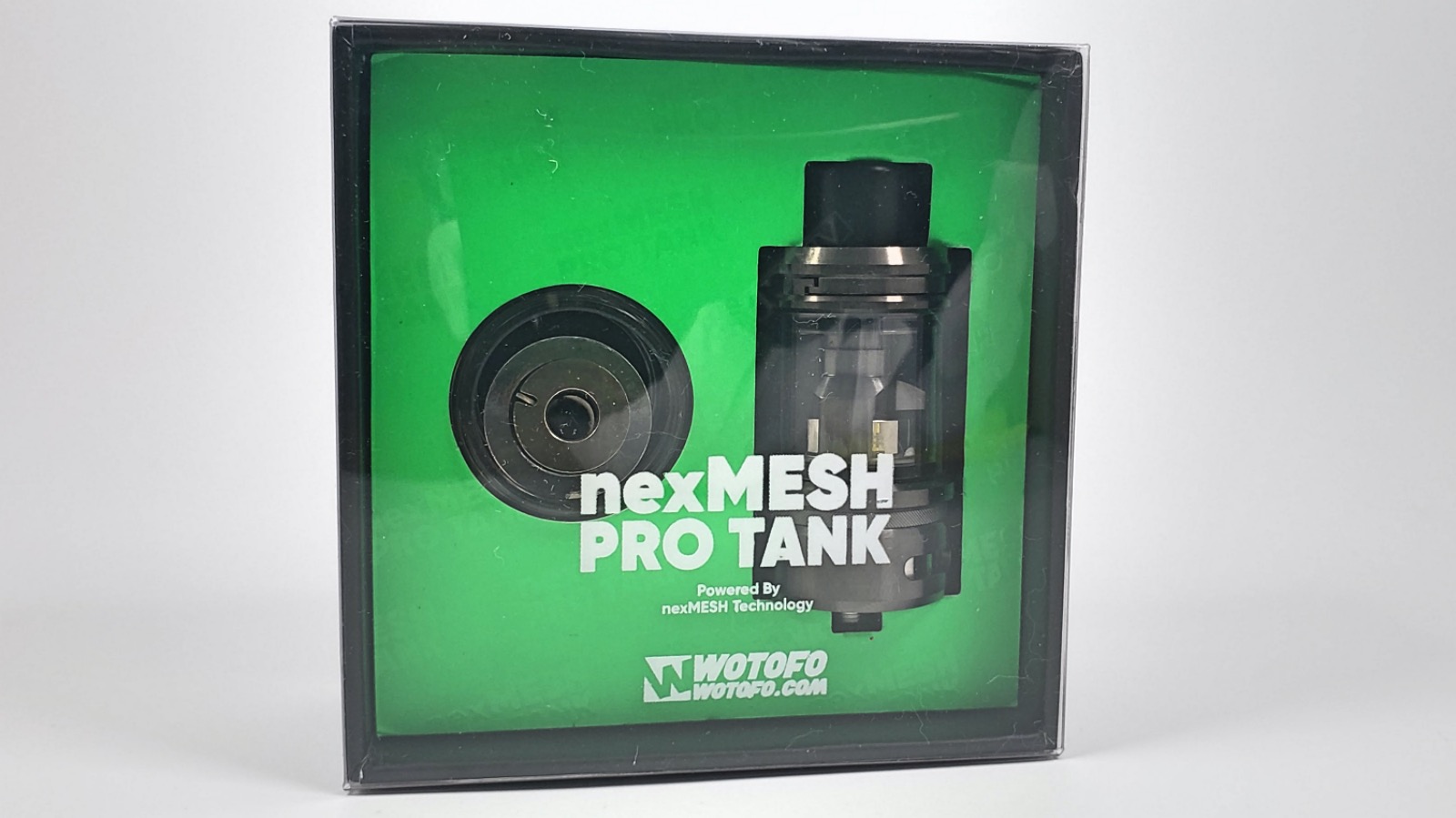 The Wotofo nexMesh Pro Tank was sent to me for review from Wotofo. This is a beautiful tank and also a nice upgrade to a previously released tank from Wotofo. The nexMesh Pro is the upgraded version of the nexMESH Sub Ohm Tank, which I’ve never used but I’ve seen reviews on it and it everyone says it was a great tank that was machined very well and performed great at the recommended wattages for the coils that came with it. This new model keeps the conical heating core that made the original work so well, but it’s smaller in diameter, at 24mm, it has more liquid capacity in both tubes, it uses new coils, and you can also buy an optional rebuildable deck for it.

The tank looks really cool. I like the way the chimney section on the inside looks especially. And the whole thing just looks really sleek and appears to be really high-quality metal. This really does feel like a “Pro” tank. Aside from its looks, it has all your typical features; a wide bore drip tip, a basic top cap, adjustable airflow, and some knurling just above the airflow. It comes in several colors such as gunmetal, black, stainless steel, gold, blue, and rainbow.

The drip tip is a wide bore 810 Delrin trip tip. Nothing special about it. It works fine. This is a top-filling tank, so the top cap slides open to give you access to the liquid fill port. There’s a little arrow on the top cap that shows which direction to push. After sliding the cap over, you’ll see a rubber membrane that prevents leaking. Just push your bottle tip through it to fill it up. When you take the tank apart, you’ll find a coil cover. This does just that, it covers the coil, which allows it to direct the vapor up to the mouthpiece. Looking inside that coil cover and you’ll see the conical design that Wotofo says gives the tank such good flavor. Wotofo says that this is the first time anyone has ever combined a mesh coil and parallel coil into a coil head. The resistance of this coil head is 0.15Ohm and runs best at 65-80 watts. At 65 Watts, the flavor is okay but it’s not great. At 80 Watts the flavor gets much better but it’s still not amazing. But it’s okay. And both wattages it’s a fairly cool vape. This might seem somewhat familiar to you if you’ve seen the Clapton mesh coil strips that come with the new Profile RDTA. They’re using the same idea here. These coils use Clapton coil wires formed into a mesh-style design. It’s Kanthal A1 wire wrapped with Ni80 wire. The resistance is 0.20Ohm and runs best at 55-75 watts. At 55 watts, the flavor is pretty good and cool. At 75 watts, you’ll get a warmer hit and a lot more flavor. I think this coil performs better than the #h15 coil. I like this one better.

There are also a couple of other coils you can buy separately to use in this tank: This coil doesn’t come with the kit. It’s a mesh coil with a conical design that is wide at the bottom and slimmer at the top. The resistance is 0.15Ohm and is best at 65-78 watts. It’s interesting that they listed the max at 78 watts. Most companies will round by fives. This coil also has a very good flavor. At 65 watts it’s flavorful and a little cooler. At 78 watts it gets a little warmer but not much warmer, and the flavor gets even better. This is the new version of the original conical mesh coiled that came with the nexMESH Subohm tank. The resistance is 0.2 Ohm and is best at 60-70 watts. At 60 watts, this coil has really good flavor and it performs really well. I could see myself using this at the minimum wattage all the time. The coils just plug right into the bottom of the tank. They sort of just click in place and hold tight. Because of this, I’ve actually found coils very easy to change out even with liquid in the tank, as long as the liquid is below the wicking channels. All of their coils come in packs of three and cost a little less than $15. This is one of my favorite things about this tank. If you don’t want to use pre-built coil heads, you can buy the RBA deck (#H17 Rebuildable Deck) and build your own coils. The deck has honeycomb airflow below the coil and two posts to hold your coil.

To install a coil, first move the coil cover. Then you unscrew the grub screws, which open up to reveal some pretty big holes, so you can fit a decent sized coil in here. Slide the coil in, snip the coil legs, tighten it all down, and put the coil cover back on.

To wick it, you’ll need to make sure you leave enough cotton at the ends to run down the wicking channels and hit the base of the deck. It’s really easy to build. The RBA head works really well as far as performance goes but of course that depends on how you build it. For example, the flavor for me was good, but not anywhere near as good as the pre-built coil heads. But if you’re an expert builder, you could probably get as good or even better flavor. If you use amazing coils and great cotton, absolutely. I used the included coil, which is pretty nice, but old cheap cotton. But still, the flavor is pretty good and now I don’t have to worry about buying coil heads for this tank if I don’t want to.

You can get the RBA deck for about $15 The nexMESH Pro has a bottom adjustable airflow, which you’ll find at the base of the tank. The adjustable ring moves nice and smoothly. I have no complaints about it.

With the airflow wide open there is a ton of airflow. You can pretty much breathe right through it. The airflow is smooth and it felt good using it.

The tank looks amazing. Like I mentioned earlier, it’s machined very well and the materials and feel of it really make it feel like a “pro” model. All of the coils have excellent flavor and the RBA deck does too. I really don’t have anything to complain about here. It’s a great tank.

This was sent to me for review from Wotofo and you can get it from them for $34.95