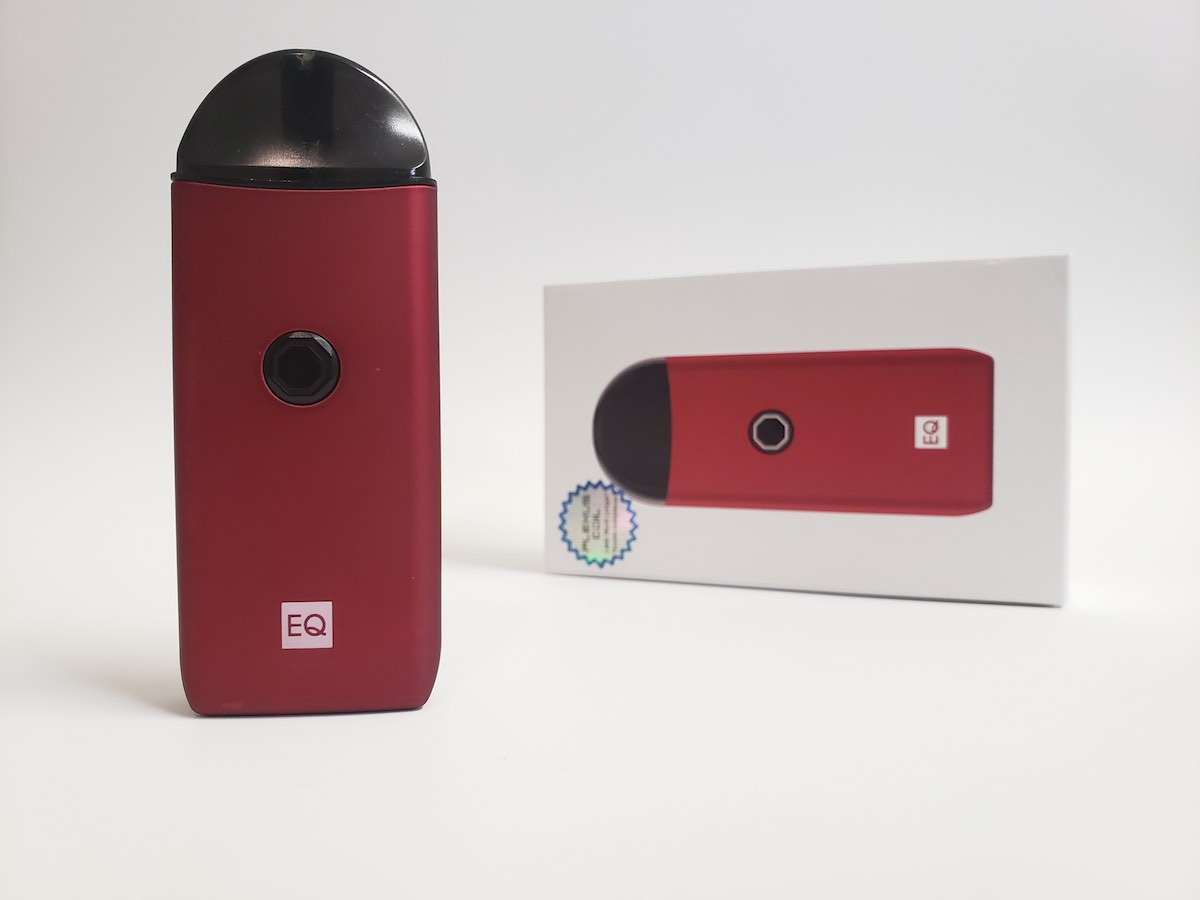 The Innokin EQ was sent to me for review from BuyBest.com. This is a very sleek looking button-activated pod vape from Innokin. The Innokin EQ has a very nice look to it. It’s a sleek and modern design and the paint is a sort of smooth matte finish. It’s nice. It’s comfortable to hold and it’s pretty compact. For reference, it’s very close in shape and size to the old Eleaf iCare or the new Eleaf iWu.

What’s different with this device from other pod vapes is that it’s button-activated when most pod devices right now are draw-activated. I don’t think either style is a pro or con inherently. I think both are good and more of a personal preference, but I like that there’s a good pod-vape on the market now that has a button, for the people who prefer it.

To turn on the EQ, you press the button three times. And same to turn it off. It’s a nice and clicky button too. The button has two colors; red and white. When you turn it on, it flashes red, then white. I don’t think it means anything, it’s just what it does.

There are also two different modes that you can use. Regular mode fires the pod at 13.5 watts and Boost mode fires at 15.5 watts. To set the modes, you need to turn the EQ off. Then you hold the firing button until the light starts flashing. It’ll cycle through red and white until you let the button go. You’ll want to let it go on whichever mode you want to use. White is regular mode and red is boost mode.

In my experience, I don’t notice a difference between the two. A two-watt difference isn’t much, so I just don’t notice it, but for people who vape lower wattage all the time, they might. I do think this is a cool feature.

The one complaint I have with this is that you have no way of knowing which mode you’re in after you’ve set it. There’s no indication when you turn it on or when you’re firing it. The only thing you can do is turn it off and cycle through modes again to make sure you’re on the mode you want to use. The battery in the EQ is an 800mAh battery, which is very nice. It’s a big battery that lasts a long time in a pod device like this.

The LED on the button also indicates battery life. If you have a full charge, the light will be white when you fire it, and when the charge is low, it’ll turn red.

It charges using a micro USB. Ok, so about the pods. They hold 2ml of e-juice and use Innokin’s new Plexus EQ 0.5ohm coil. These are mesh coils, which is the first mesh coil I’ve seen in a pod device, but since its mesh, that means it’s designed for better flavor. Innokin also says they should last longer than your average pod. I can’t speak much to the life-span but I’m still using the first pod after about three weeks and it’s still working fine, so it seems good. As for the flavor, yeah, it’s pretty good. I’m honestly not sure if it’s any better in flavor than other pod systems I’ve tried because they’re all pretty good these days, but yep, the plexus coils and pods have good flavor. Filling the pods is also very simple and well designed. You just turn the bottom piece and it opens up two holes. The fill holes are small, so you need a fine tip bottle to fill it. The nice thing about how this opens up is that it instantly opens both holes, which prevents flooding, which is an issue with other pod systems. The problem is that if one hold is closed, pressure can’t be released and the hole gets plugged while you’re trying to fill it. So that’s not an issue here in my experience. The pods come with a pop off cap. I don’t know if this is designed to prevent leaking, but I think it can be really useful for preventing dirt and or whatever else from getting in. Have you ever read those stories on Reddit where people vape their tanks and later find a bug has climbed in there? Yeah, that’s a thing, and this prevents it!

To get that cap off you need to squeeze it and it slides right off. Now here’s an issue I have with it. The pods sit in the device so loosely that it’s hard to slide the cap off without pulling the whole pod out. I would have liked for these pods to be a lot tighter in here. They don’t just fall out or anything but could be tighter. And if you squeeze the cap tight enough, the pod will stay in there. While I like that they included it, I’ve chosen not to use it just because I want faster access to the device when I want to vape. The airflow is a bit of a cross between tight and airy. This isn’t super restricted, which is what I prefer in pod vapes, but that’s not what everyone likes, so if you like a little more airflow, that’s what you’ll get with the EQ. It’ll give you a slightly airy mouth-to-lung draw or a very restricted lung hit. So that’s the Innokin EQ. I do like a lot of things about this. It looks great, it’s compact, it has a large battery, I like that it’s button activated, it’s easy to fill the pods, the coils last a long time, and the flavor is good. That’s a lot of good things to like about it.

My only complaints would really be that the pods slide out a little too easily and that there’s no indication of what mode you’re in after you’ve set it. I would have liked for them to include an extra pod too, but all in all, this is a great little pod vape.

So if you’re interested, BuyBest.com sells it for about $22