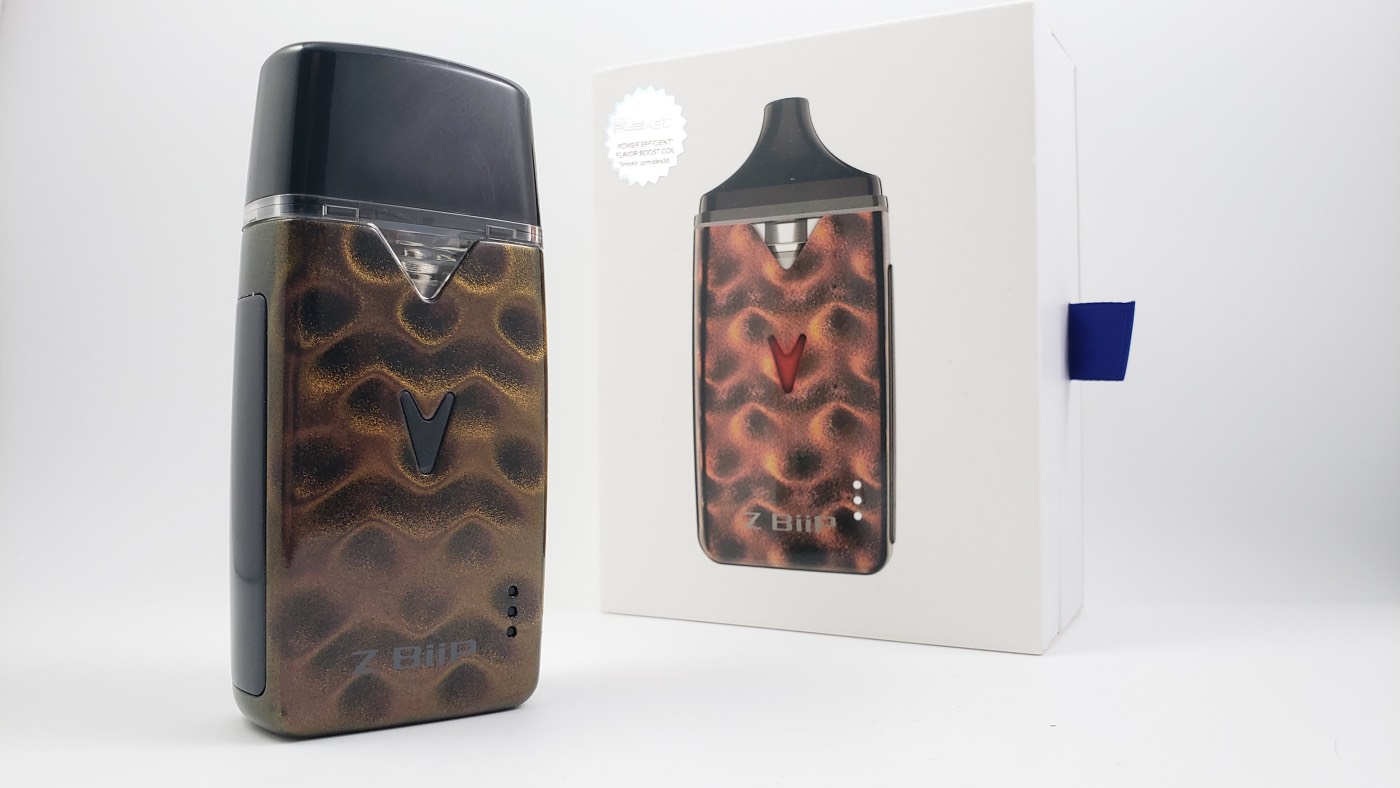 The Innokin Z Biip was sent to me for review from Provape.com. That’s right. Provape is back. But I believe it has new owners and they aren’t making the Provari again, but it’s cool that the name is still going. Anyway, let’s talk about the Z Biip.

So Z Biip is an all-in-one kit that uses pods with replaceable coils.

So the Z Biip is a beginner device manufactured by Innokin in collaboration with Dimitris (the VapingGreek) and Phil Busardo. It doesn’t look like a beginner device because it’s so big, but that’s actually the point. Phil and Dmitri wanted to create a beginner device that wouldn’t die as fast as all of the other beginner devices on the market. And that’s a really great idea because for smokers switching to vaping, one of the most likely reason for them to smoke a cigarette is when their battery dies. It happened to me when I first started vaping too. The battery died and I smoked the rest of the night. So I really like the big battery here. It’s a little big and I think the mouthpiece is a little funny looking, but the finish is very nice and I really like the various patterns.

If you’re familiar with most pod systems and beginner devices, they’re catered mostly to high milligram salt-based nicotine. The Biip works just fine with salt nic, but Dmitris and Phil wanted this to be fully satisfying with your regular standard nicotine e-liquid.

Out of the box the Biip has a cap. I don’t tend to use caps when devices come with them, but I really should. There have been lots of times where I’ve looked into a mouthpiece and found dirt, lint, grass, and one time even a gnat. I guess I don’t care all that much, but you might, so it’s good to have a cap. And while we’re on the subject of the mouthpiece, it’s right in the middle of the device and built into the pod. It’s also tapered and completely round at the tip. It’s designed to be comfortable to use at any angle and no matter how you hold the device. To fill the pod, you twist the entire mouthpiece section which gives you access to the e-liquid fill port. That fill port is big so you shouldn’t have any problems filling it up. And you can do this while the pod is still attached to the device, so it’s really easy to do. The silicone seals are supposed to prevent leaking and they work well for me. I haven’t had any issues with leaking.

The pod holds 2mls of e-liquid, so they are TPD compliant for people in the UK too. And if you want more liquid capacity, there’s supposed to be an optional 4ml cartridge coming.

If you want to take the pod out to fill it or if you want to change the coil, you should be able to pull the pod right out. You can also push it out from the side. The cartridge could be a little tighter. It won’t fall out on you or anything, it’s too tight for that to happen, but it comes out pretty easily when you try to pull the cap off. This is just another example of Innokin, Phil, and Dmitris wanting to cover all bases for beginners. You can fill the Biip cartridges using large glass droppers, but it’s less messy with a fine tip bottle like this. So you have that option. The plastic of this bottle is also soft, so it’s not hard to squeeze for people with hand issues. There are three holes on each side of the airflow control. You can open it up for a looser tight-draw, or you can close it down to one hole for a really tight draw. It works really well.

I actually like the really tight draw that you get with the airflow all the way closed down, but that pulls too much liquid into the coil, so it tends to get oversaturated or flooded. So you might get some e-juice in your mouth like that. It’s better to have at least one airflow hole open. The Z Biip comes with two coils. The new Plex3D 0.48ohm mesh coils are designed for a warmer vape, longer coil life, and good flavor. These work well in the higher wattage settings of the Z Biip. The flavor from the mesh coil is really good. The 1.6ohm coil is designed for lower wattage and cooler vape. You’ll want to run these at the lower wattage setting of the device.

Something you’ll want to keep in mind when changing coils in the Biip after you’ve already filled the cartridge is that the coil seals the top and bottom holes of the cartridge. So you can’t change a coil in here if there’s e-liquid in the cartridge or it’ll pour out of the bottom or out of the mouthpiece. When you need to change the coil, make sure that you’ve vaped most of the e-juice out of it.

Or you could hold it on its side and you might be able to save some of the e-liquid in there. One of the most frustrating issues with new devices is that manufacturers create new coils that work only in those devices. You usually can’t use other coils made by the same damn manufacturer. Innokin did a great thing here and made the Biip compatible with all of the coils in the Z-Coil line, which are also compatible with their popular Zenith tank.

To change the coil, take the airflow control off and pull the coil out and push a new one in. It’s super easy to do.

Just make sure that you have the coil seated all the down. It’s really easy to push the coil and not realize that it’s not seated correctly. There are flat edges on the coil head and those fit right the slots. To turn on the device, you press the big firing bar three times fast. And the same to turn it off. That’s also how you activate the device. That big bar is makes firing the device easy and comfortable. For people with arthritis in their hands, which is actually pretty common, the big bar definitely makes using the device nice.

The button isn’t clickable across the entire bar. It’s not clickable at the bottom but becomes clickable somewhere around 3/4 of the way down and it’s easiest to click at the top.

To change the wattage, turn off the device and then press and hold the big activation bar on the side of the Biip. That cycles through the power levels and stops when you let go of the activation bar.

On the front of the device, right in the middle is a v-shaped LED light. That v-shaped light tells you the wattage setting that the Z Biip is set at. For the few beginner devices that do offer adjustable wattage, they usually don’t go any higher than 12 watts, which sometimes isn’t enough. So I really like that Innokin added a setting that goes up to 16 watts.

The Beep in the Biip The Z Biip gets its name from an audible sound that it makes to let users hear the status of the device. This is great for people who might not have great eyesight.

And if you don’t like the beep, you can turn it off using the switch on the bottom of the device.

The battery is the reason this device is so big. This thing has a huge 1500mAh battery, which Innokin says is the largest for any all-in-one device on the market right now. That big battery is going to last you a long time.

Just to put it into perspective, those small flat sized vapes like the Vladdin typically only have around 200-300mAh batteries. Depending on how much you vape, those might get you through the day without needing to be charged, but for heavy users, you’ll have to charge it before the day is over. So with the 1500mAh battery in the Z Biip, you have about five of those devices worth of battery life. You’ll definitely get through the day with heavy vaping. You’ll probably even get 2-3 days, or if you’re like me, you’d get a couple of weeks.

And you can vape while it’s plugged in, so that’s always a nice plus, especially for people who are just getting into vaping and this is their only device. You just might need to vape while it’s charging.

On the front of the device are three tiny LED lights, which tell you how much battery life you have left. This device isn’t going to cater to everyone. It’s specifically targeted towards beginners, while also considering older people, who are often left out when companies make new products. And I love that. I think a lot of companies have forgotten the reasons why they got into the vaping business – to help people quit smoking – and many of us started vaping after our thirties, fifties, and so on. But most devices aren’t marketed to the older crowd. They’re marketed to the younger community. So I have to give it up to Innokin for making something that’s smokers need.

Innokin might not sell a million of these, but the people who buy these will appreciate that this device was made for them.

There are lots of great things about the Z Biip. The finish is very nice, it has adjustable airflow, I like the big firing bar, the cartridges are refillable, the flavor from the coils is good, and you can use Innokin’s Zenith coils here too, which is awesome. If I had to complain about anything it would be the weight, which is a little heavy and I would have liked for a lot more e-liquid capacity considering the size of the device. But if you’re looking for something easy, a device that performs great, and if you want a ton of battery life, the Z Biip is great.

This was sent to me for review from Provape.com and you can get the Innokin Z Biip from them for $43.99.