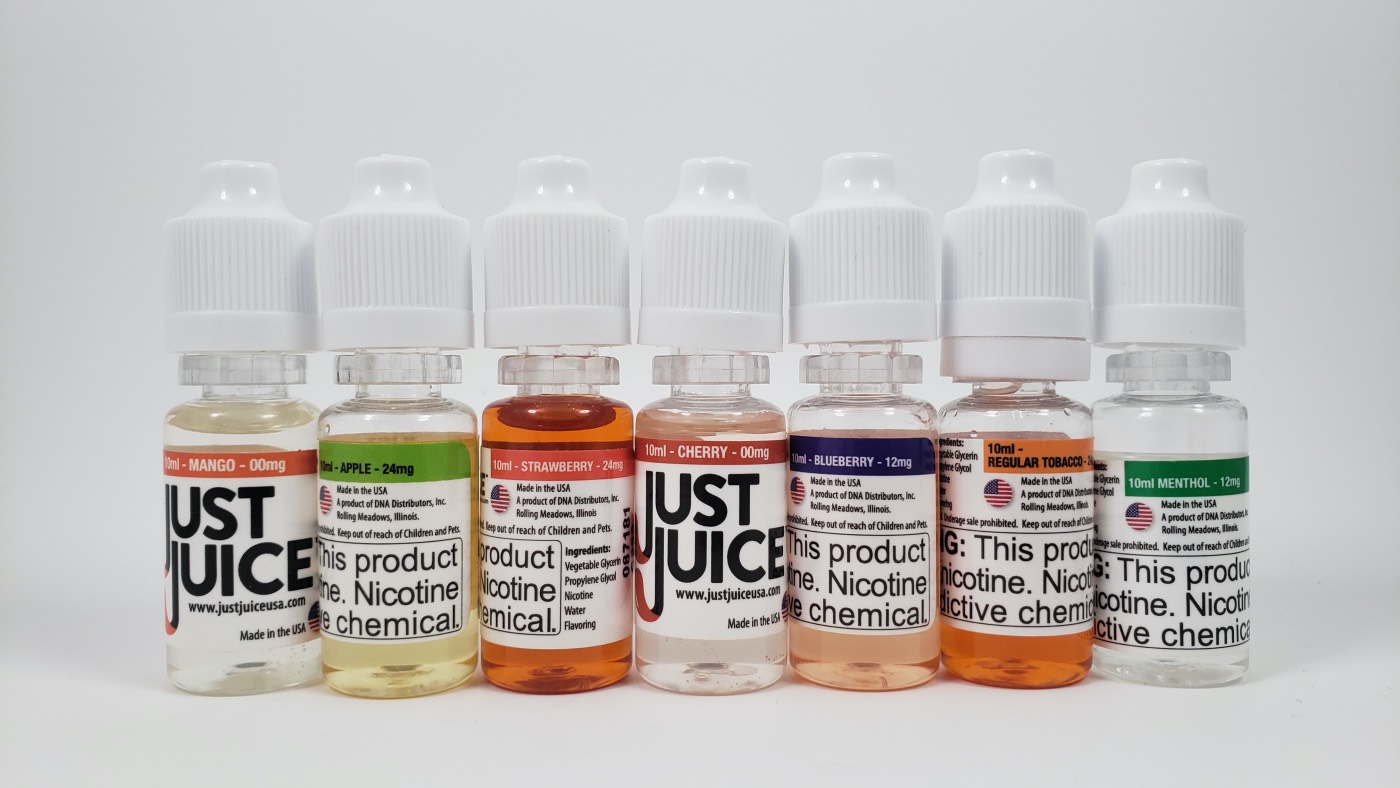 Just Juice (affiliate) is an e-liquid brand based out of Rolling Meadows, IL. They also have a CBD e-liquid line which they say is grown and crafted in California. They’ve been around for a while starting with a cigalike device in 2009 and then releasing their e-liquid line in 2013, but this is the first time I’ve tried any of their products. They sent me both their regular e-liquid and CBD e-liquid.

Some of the key points that Just Juice makes on their website is that their liquids are 100% USA-made and all from American Ingredients.

Their e-liquid is a 60% PG and 40% VG ratio, which means that this is going to be slightly thinner, maybe a little more harsh than higher VG e-liquids, and it should have more flavor, since PG is a great carrier for flavor. Just Juice also only sells three nicotine strengths; 24mg, 12mg, and 0mg.

They have 15 flavors available in the regular e-liquid line and they sent me seven of them, so let’s go through one by one. Cherry (0mg)
They describe this as a soft dark artificial cherry aroma with heavy almond and floral notes. I think that’s awesome that they are up-front and honest about the artificial flavor. Smart too, because cherry e-liquids NEVER taste like real cherries. In a lot of cases it often tastes like cough medicine. It’s just one of those flavors that I don’t think anyone has been able to figure out. Just Juice also suggests mixing this with their chocolate e-liquid, which is a really cool idea. So what do I think? Yeah, it tastes like artificial cherry and close to cough medicine, but almost like cherry coke. This will be one of those flavors that some people will hate and some will like. I do think mixing this with something else could work great though, like chocolate or cola. I actually did try dropping a little bit of Liqua’s cola e-liquid in this and it created a decent cherry and cola flavor.

Apple (24mg)
This is described as a simple and smooth ripe sweet juicy apple. This is a lot like other apple e-liquids that I’ve tried, but it has just a little more bitterness to it. So it really reminds me a green apple. It’s sweet and sour at the same time, it tastes like apple, and it’s a good flavor.

Blueberry (12mg)
They describe this as a burst of sweet ripe summer blueberries. They say it’s light and sweet. I loooove blueberries and while I typically like most blueberry e-liquids, I rarely think they come close to the real thing. It’s just one of those flavors that are really hard to replicate. And the same holds true here. It’s actually a pretty good blueberry flavor. I like it. But’s it’s more artificial than authentic. But it’s good, the flavor comes out strong, and it’s slightly sweet.

Strawberry (24mg)
This is described as a genuine flavor of sweet strawberries. In Just Juice’s description they say that after real strawberries go out of season, you can relive the fragrance and taste with this e-liquid. So they’re clearly saying that this should taste like real authentic strawberries. And for any of you who have a lot of experience with strawberry e-liquids, I know you have your doubts, much like I did. And unfortunately, I didn’t like this one. It does taste like strawberries at first, but then it seems to have a weird aftertaste to it. I really don’t know how to describe it, but this flavor just doesn’t work for me. Regular Tobacco (24mg)
This is described as an e-liquid that would be preferred mostly by former smokers who have just turned to vaping. They also mention that tobacco flavors are also combined with creams, custards, and caramel flavors. They didn’t send any of those for me to blend or experiment with, so I went straight-up tobacco e-liquid for this one…. It’s definitely harsh, which is because it’s 24mg nicotine but possibly also because of the high PG. The flavor is strong, which is nice, but it doesn’t really taste a whole lot like tobacco to me. I can taste that they were going for tobacco though. It’s more of a very light toasted tobacco with maybe a hint of vanilla and a lot of sweetness. Even though its not an authentic tobacco, it’s still a pretty good flavor. I actually ended up really liking it.

Mango (0mg)
Just Juice describes this as satisfying, smooth, and sweet. They say it has notes of tang that make the mouth water. This tastes like mango, but it’s way different than any other mango flavor I’ve ever had. It has what seems like a lot of earthiness to it and I’ve never had that in a mango flavor before. I’m not really sure if I like it or not. I don’t dislike it, but I don’t particularly like it either. This is strange one. Personally, I think it could use more sweetness.

Menthol (12mg)
Just Juice describes this as an icy cool sensation of menthol that is typically blended with fruit like strawberry, watermelon, or apple. I think that’s really cool that they pointed out to their customers that they can mix this with other fruity e-liquids. I didn’t mix this with other liquids because I’ve had plenty of fruity menthol liquids in the past and I agree, it works great. But reviewing this as it is, it’s a very good standard menthol. I don’t know if there’s anything else mixed in here but it just tastes like straight-up menthol flavor to me.

Just Juice is really affordable stuff. They sell 30ml bottles for $12.99 and 10ml bottles for $5.99. It doesn’t matter which nicotine level you choose, the price is the same. Ok, now let’s talk about their CBD line. Just Juice has three flavors in this line and then sent me two of them. Just like their reqular e-liquid line, this is 100% USA-made. It’s also vegan, THC-free, and nicotine free. With all of the worry about e-liquid in the news right now, Just Juice also clarifies on their website that none of their products use Vitamin E. Passion Fruit Guava
They describe this as a light flavor with rich notes of guava nectar. This definitely has a tropical flavor and that flavor comes out strong, so I like that a lot, but I don’t get much guava. Maybe just a little. But to me it tastes more like a tropical sweet and slightly tart passion fruit. You can taste the CBD just slightly, but hardly at all so I think it’s really good.

Cinnamon Roll
Just Juice says that this has deep cinnamon flavors and the gooeyness of a real cinnamon roll. They say it has the perfect balance of cinnamon, sugar, and dough that are able to mask the earthiness of the CBD terpenes. This one is pretty good. It actually does taste like a sweet cinnamon roll and I can’t taste the CBD at all. I really like it.

This is a nice line. I think it’ll especially appeal to former smokers because of how it’s formulated. This is high nic e-liquid made with regular nicotine and high PG, which means it has more throat hit than typical e-liquids but that higher PG also means that the flavor comes out much stronger than high-VG liquids. I also appreciate their honesty in their product descriptions. It’s a good line and it’s budget friendly at only $6 for 10ml or $13 for 30ml.

As for the CBD liquids, I think they did a great job of covering up the earthy CBD taste with good flavors. I really like the two flavors they sent me.

This was sent to me for review from JustJuiceUSA.com (affiliate)