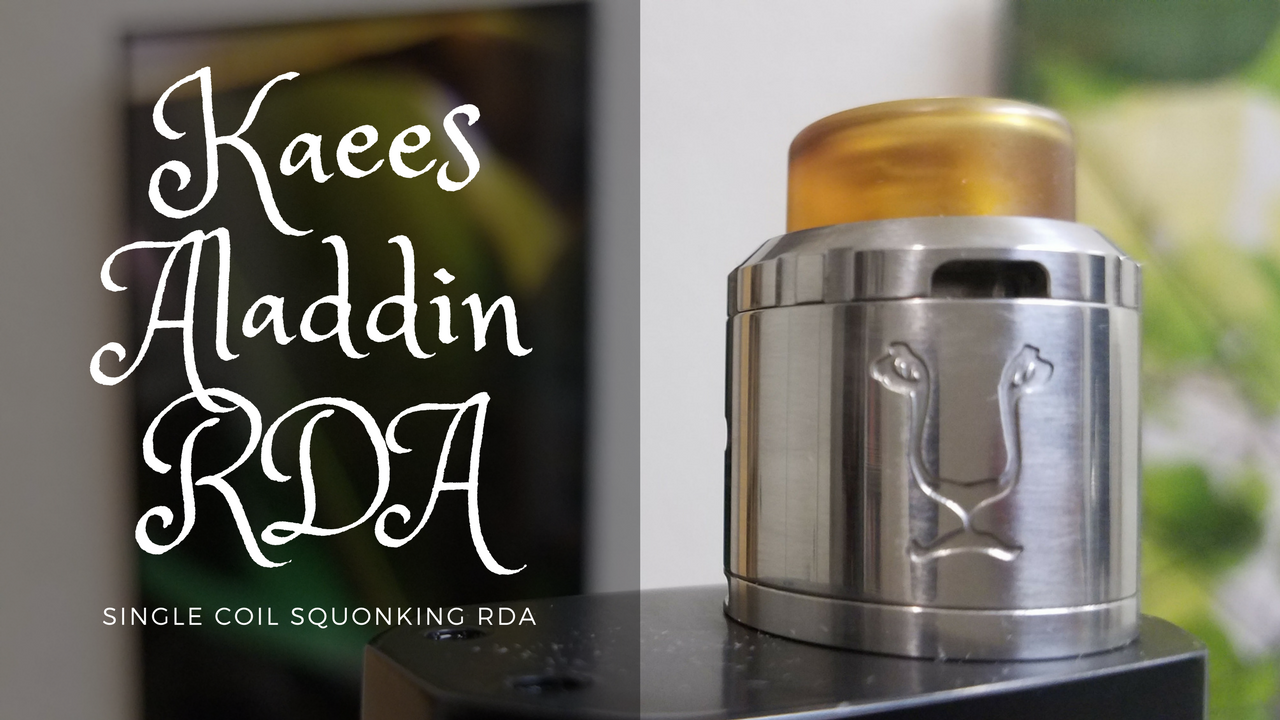 The Aladdin RDA was sent to me directly from the manufacturer, Kaees, for the purpose of review. Check it out here.

The specs say it’s made of PEI, and as you can see it looks like ultem, and that’s because it is. Ultem is part of the family of PEI, or polyetherimide plastics. The drip tip is wide like an 810, but if you look down the center of the drip tip you’ll see that’s actually a narrow 510.

I like that about this drip tip because you get the comfort of an 810 if that’s what you like. And if you don’t like the large tip, you can use your own 510 instead. You can only use 510 drip tips on here though because the design of the barrel doesn’t allow you to use an 810 adaptor.

Under the drip tip you have the top cap, which is basically the top airflow control ring. There are two slots on this top airflow cap that line up with airflow holes on the top of the barrel. You can easily rotate this top piece to open or close the airflow. The only problem I’ve had with this is that it’s a little hard to see the airflow slots on the top cap, so it can be tough to line up. Not that big of a deal though.

On the barrel, there are two more airflow slots, one on each side. The barrel sort of locks into place when it’s on correctly. It rotates clockwise and counterclockwise to open and close the airflow to whatever setting you like, but it won’t spin freely. It stops at a certain point.

On the base, you’ll see two more airflow holes. These holes aren’t adjustable and you have to leave them open. They lead to the middle of the deck and point right beneath the coil.

Even with all of the airflow holes open, you don’t get a ton of airflow, which is fine. Single-coil RDAs like this don’t need to be wide open. But you can still get quite a bit of airflow if you want.

The deck is very similar to a lot of other popular single-coil RDAs on the market right now, such as the Wasp Nano RDA. The positioning of the posts requires that the coil legs are in opposite directions. The grub screws pinch down the coil legs easily and I haven’t had any problems with the coils slipping out, but it works best with larger or flat coils. You’ll need to work a little bit to get round wires coils in the right place before tightening them down.

There’s a big insulator around the positive post to prevent shorts.

I think Kaees should have made the airflow holes beneath the coil protrude slightly so that they would have been less prone to flooding.

On the sides of the center section are tiny little squonking holes. So if you’re using a squonking device, that’s where the e-juice will come out.

And on the bottom of the base, you can see that the positive pin protrudes enough to where you probably could use this on a hybrid mech mod, but use your best judgment with that. I’m sure you know how to make that call if you’re a regular hybrid mech user.

The Aladdin comes with both a solid 510 pin and a squonking pin, so you can use it however you like. Like I mentioned earlier, e-juice comes out of those little holes in the middle of the deck.

Just by looking at the squonk hole placement, you get the idea of how this is supposed to work. The squonk holes should push e-juice right into the wicks, which should keep them nice and soaked. That’s the theory, but it doesn’t work that way. You need to push your wicks away from the holes, closer to the barrel. Otherwise, the wicks act like walls and it floods the center of the deck and forces e-juice into the bottom airflow holes.

So it doesn’t push e-juice into the cotton like you’d think, but the holes still work great with filling the juice wells. They push a lot of e-juice out too, which is something I like.

Now if you’re using this with the solid 510 pin, the drawback is that you can’t drip from the drip tip because the juice will drip off the coils and into the airflow holes. So you have to take the cap off and fill up the juice wells, which makes this a little hard to use on the go, which means that it’s better to use in squonk mode on the go, or at home when using the solid pin.

Flavor From the Aladdin RDA

Finally, let’s talk about the most important part – the flavor. I think the flavor is ok, but I’ve seen other reviewers talking about how crazy good it is. I don’t get that. I’ve tried several different builds in the Aladdin to get this amazing flavor everyone is talking about and I can’t get it. I’ve tried the included triple core Clapton, I’ve tried a regular Clapton coil, and two different basic round wire builds; one with kanthal and one with stainless steel. I’ve also tried raising the coils way up or putting them low.

I’ve found the best flavor comes when the side airflow and top airflow are closed, leaving only the bottom airflow, but that makes it a very restricted lung draw. The flavor is reduced as you open more of the airflow holes.

So yeah, that’s the Aladdin RDA. The flavor is alright, it looks nice (except for that terrible logo, which I think is a tiger), it’s easy to build, it squonks well, and the triple airflow design is unique. And what I really like about the Aladdin is that it’s a single coil RDA that can handle some good wattage with all that airflow. It’s not super airy, but it’s good.

If you want to give it a try for yourself, go to kaees.com and buy it for $35. If you have one, let me know what you think.