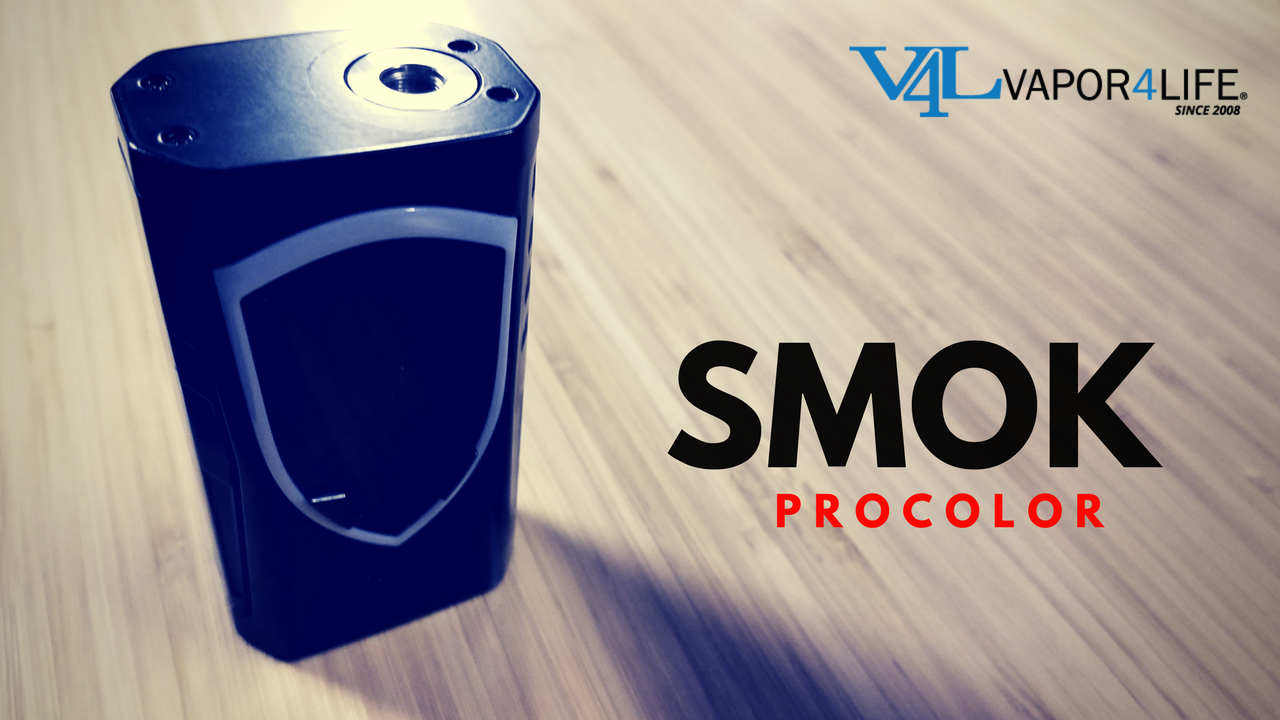 The SMOK ProColor was sent to me for the purpose of this review from Vapor4Life.com. Vapor4Life caters to both advanced vapers and beginners, so go check them out if you’re looking for something.

It’s sleek like most of SMOK’s products. I think it looks really nice. It reminds me a lot of the SMOK Alien, so if you liked that mod, you’d probably like this one. It’s just slightly bigger than the SMOK Alien though, but barely. It’s practically the same size. The ProColor is 85mm tall, 46mm wide, 29.5mm in depth, and weighs 151 grams.

The back of the device has the design of a shield and has a carbon fiber sticker on it. Nothing else really special about the looks.

The firing button runs along the length of one side of the mod, although only the top part is clickable. It’s really nice and clicky and I haven’t had any problems using it. It’s comfortable and has enough resistance so that you won’t accidentally fire it under normal conditions. But you definitely don’t want to just throw it into a bag unlocked because then it probably will fire on you. You should definitely lock it.

And of course you get all of your typical safety protections to protect against short circuits, over-heating, and low batteries and it has a 12-second puff cutoff.

The up and down buttons are right below the screen. Those are also nice and clicky

Below that is the USB port. This USB port is for both firmware upgrades and charging your batteries. I always recommend against charging batteries in a device, but you have that option.

The screen on the front is also in the shape of shield and it’s bordered by an LED light. That LED light has 12 different colors so that you can change to whatever color you want. You can also change the color of the text on the screen.

The LED screen itself looks really nice. It’s bright, bold, and colorful. The text is really rich and it’s fairly easy to see in daylight, although you do have to tilt the screen a bit to see it if the sunlight is shining right on it. On the screen you’ll see your battery levels, your wattage, the puff duration, resistance of your atomizer, what mode you’re in, the ramp-up strength, your voltage, and your puff count.

If you’re in TC mode, you’ll see all the same things except that you’ll see temperature instead of wattage and you’ll see what TC mode you’re using in the bottom left corner of the screen.

When you’re in one of the screens, you use the up and down buttons to change values and you long press the firing button for a couple of seconds to make a selection.

The first screen lets you change the mode. You can choose from wattage, three different temp control modes, and memory.

In the wattage screen, you have the option of adjusting your preheat mode, which is how fast it ramps up. Preheat has hard, soft, and normal.

The three different temp control modes are Titanium, Nickel, and Stainless Steel. It’ll automatically set the coefficient based on your wire, but you can manually adjust it too. You can also set your desired wattage, which is what the device should hit your atomizer at right when you fire it, then it will adjust to the temperature you’ve set. So it’s basically like adjusting your ramp up.

I’ve tested TC mode with stainless steel and it works fine. I didn’t have any problems with it.

There’s also a puff monitor on it if that’s something you care about or you can shut it off.

The screen settings let you set the color of some of the text on the screen. You have six colors to choose from. You can also set how long you want the screen to stay lit after using it, between 15 seconds and 240 seconds, and you can set it to autolock after the screen turns off, which is a nice safety feature.

The LED Screen gives you the option of changing the color of the LED light that surrounds the screen. There are 10 solid colors to choose from and two options to cycle through various colors while firing.

You can set the LED to stay lit while firing, flash, or fade in and out. And you can set it so that it’s on whenever the screen is on, on only when vaping, or you can turn it off completely.

There were only a couple of things I didn’t like about the ProColor. Navigating the menu with short presses on the firing button and switching screens with short presses is confusing. I keep forgetting to long press and I end up exiting the menu and having to go back in. But that’s just me. I also don’t like that it doesn’t automatically sense the ohms of the atomizer and let you start vaping. Instead you have to tell it that you’re using a new atomizer. I don’t know, I guess that’s also just a personal preference. Both are really nitpicky, and not big deals at all.

But that’s pretty much it. It’s another nice regulated device from SMOK. It looks great, the LED screen is bright and crisp, and that LED light adds some nice pop to the looks of it. It’s a typical SMOK product, which isn’t a bad thing. Nothing truly innovative here, but it has all the features you’d want in a regulated device, the design is sleek, and it’s affordable.

The tank included in this kit is the TFV8 Big Baby Beast, which is a 5ml capacity tank. I’ve actually reviewed the TFV8 before, so I’m not going to review it again here, but I’ll just quickly mention that I really liked it. It can handle high wattage and it has great flavor, at least in my opinion. The coils in SMOK products don’t last long, so that’s a common complaint, but while they’re working, they usually work pretty well.

Ok, so that’s everything for this review. Again, the SMOK ProColor was sent to me for review from Vapor4Life.com so if you’re looking for a ProColor kit, check them out. And take a look at their social media profiles because they always seem to have deals going and if you subscribe to their newsletter and they’ll give you 10% off.