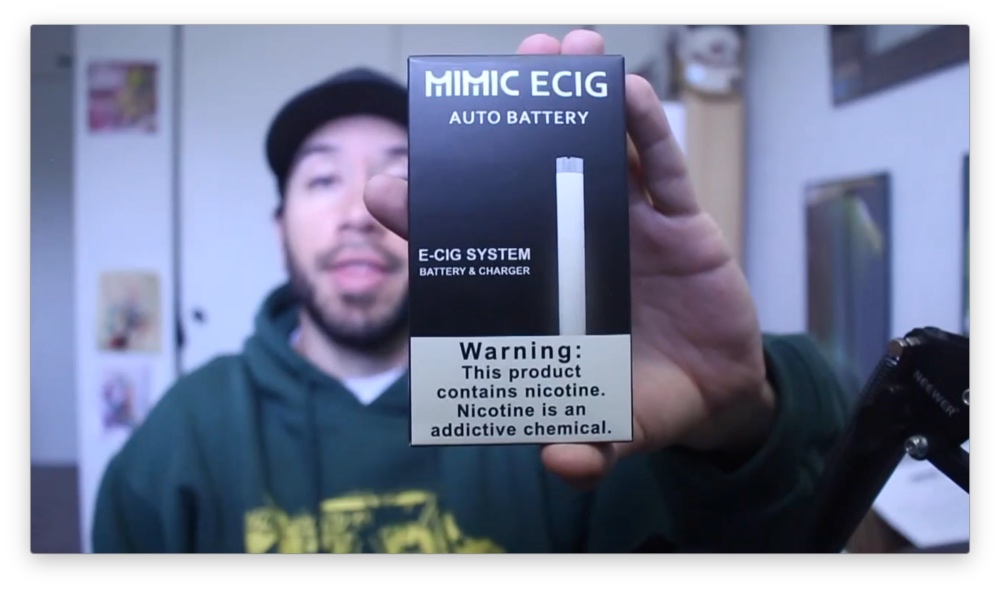 The Mimic Ecig System was sent to me for review from MimicEcigs.com.

This is where it all started. The old-school cig-a-like vape that got this whole vape game going. Before we get into this, I want to explain why I chose to do this review. I know that the majority of my regular readers/viewers are more hobbyists interested in totally different products, but I think it’s important to review products like this because someone who is totally new to vaping might be researching it and that’s who this review is for.

Also, I know that cig-a-likes get a bad rap within the vaping community, but I’ve always been a fan of them because this is what I used to quit smoking. They might not work for everyone, but neither does a pod system and neither does a sub-ohm tank. We all need to find what works for us and sometimes it’s a cigalike.

Alright, let’s talk about it! 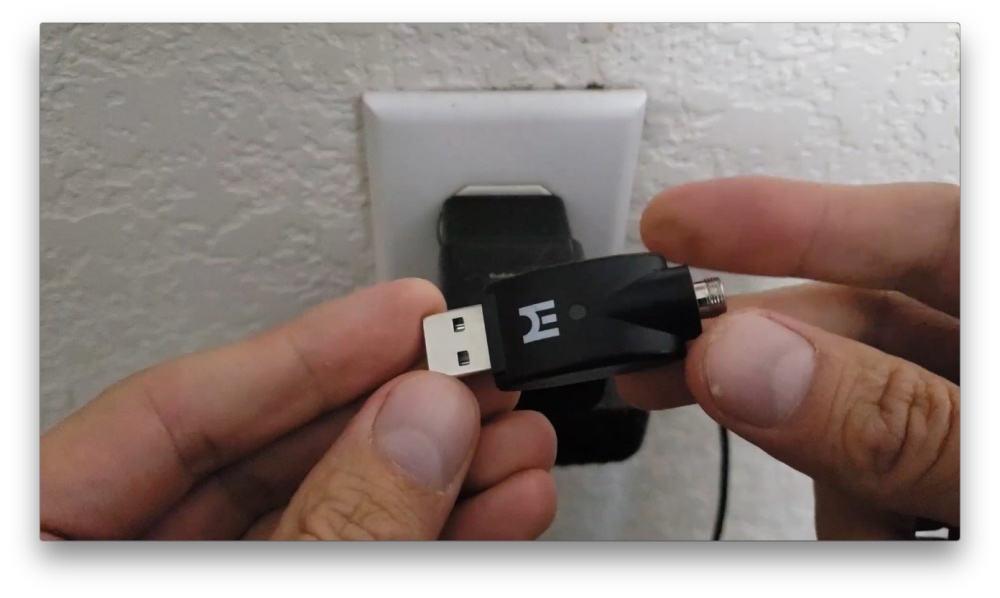 There’s no indication of when the battery is about to die. It’ll simply stop firing when it’s drained. The light at the end will blink letting you know that it needs to be charged.

These types of vapes do require a special charger, which each device comes with. You can plug the USB adapter into a computer or a wall charger, but I always recommend charging through a wall charger for all vape stuff. It’s just safer. 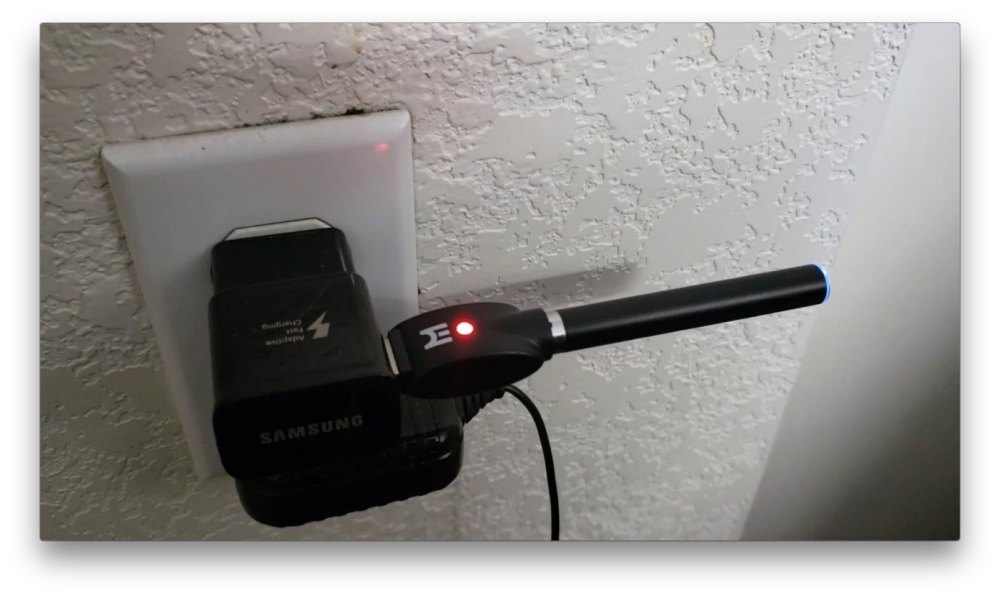 These cartridges fit any 510 atomizer adapter. You could actually vape these on any device as long as there are airflow slots built into the 510 on your device. 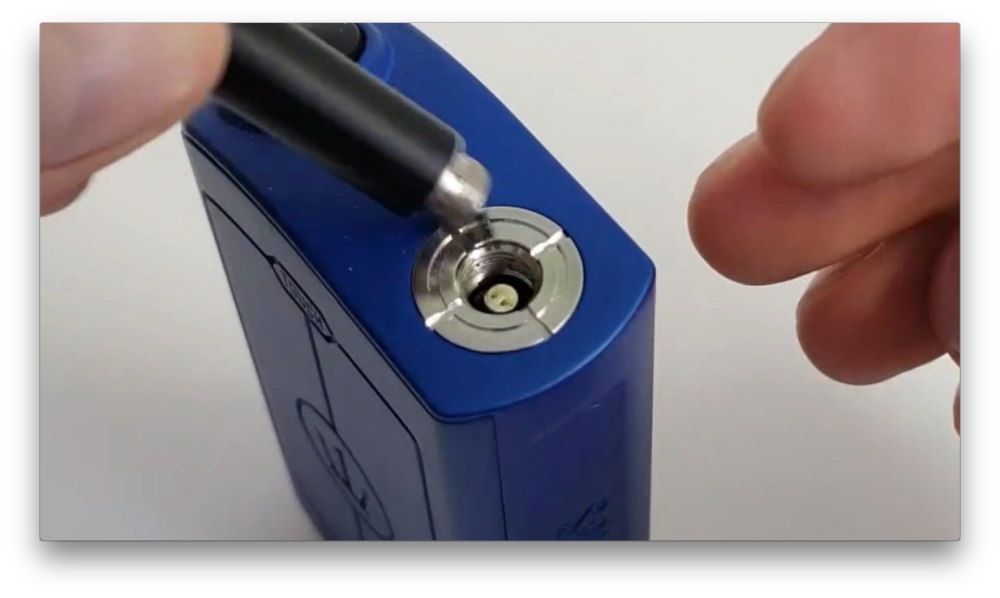 Most devices don’t have them anymore though, but you could screw the cartridge just a little loose so that it still makes a connection to the device but allows airflow to come in from underneath.

Or you can buy one of these classic 510 to EGO thread adapters, which cost about $1-$2 online. 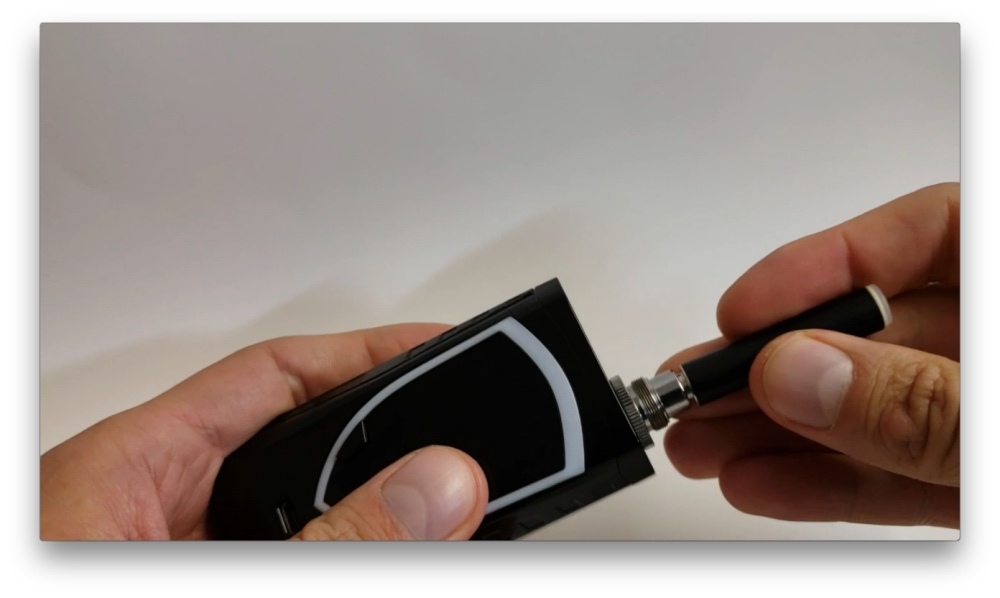 And since the cartridge is 510 compatible, you can use this on anything – a cigalike, a vape pen, a high-powered device…whatever you want. Obviously, it makes the most sense to use on a cigalike battery, but you have those options.

If you do use it anything else, especially a variable wattage device, I recommend keeping the wattage low, like at 5 watts. Anything higher than that and you risk burning the wick or breaking the coil.

And if you want to know the technical specs, this is a 2.85 ohm coil.

As for the draw, it’s very tight. It’s like you’d expect for something that mimics the draw of a real cigarette. 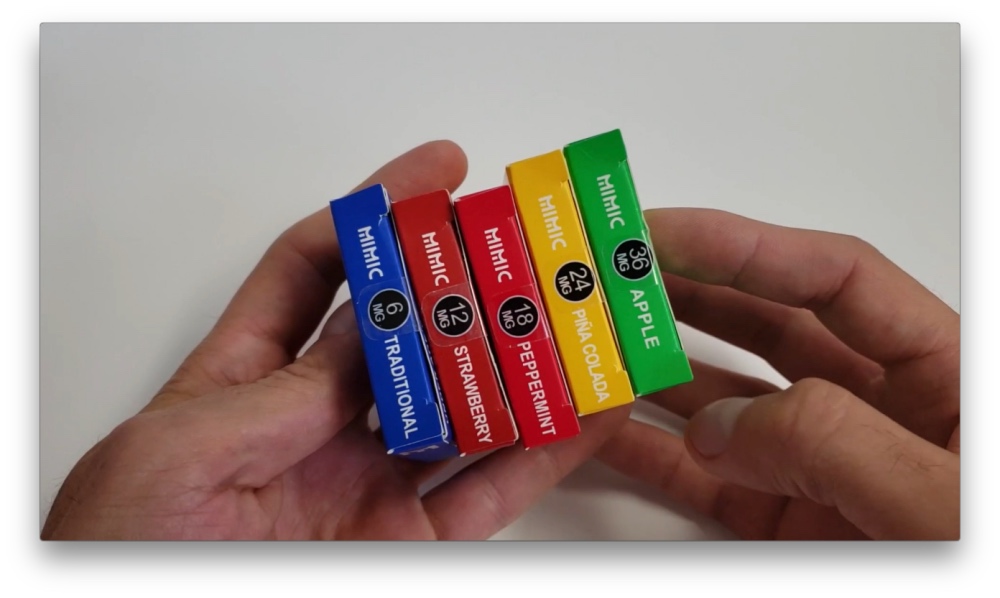 But yeah, this is definitely an upgrade on old-school cartridges. That means with higher nicotine levels, you get less throat hit. Now for me, the 36mg cartridges are very smooth, but I also vape high-nic e-juice often, so you might feel differently.

Also due to the smoothness of nic-salt e-juice, it’s hard to tell the difference between 36mg and 6mg nicotine, at least from the throat hit. But the nicotine strength seems accurate. I definitely felt the strength of the 36mg cartridges when compared to the lower nic cartridges.

If you’re a smoker just getting into vaping, I would recommend starting with 36mg nicotine to help with your cravings, but you might even want to buy a few different levels to figure out what works best for you. 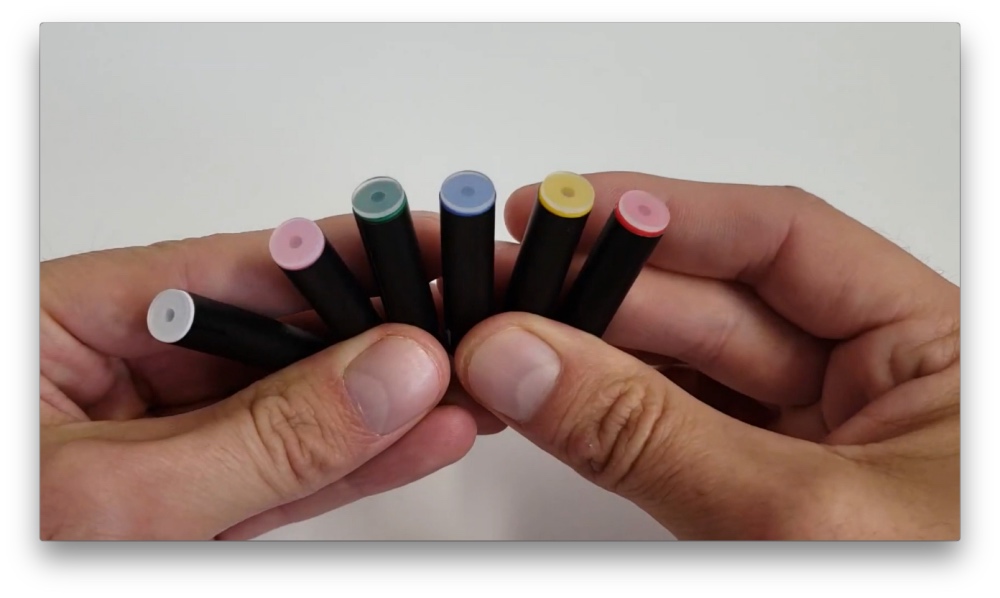 Each cartridge has it’s own color to indicate the flavor.

All of their flavors are fairly light, which is simply how cartridges work. Cartridges can only produce so much flavor. But despite their lightness, the flavor does come out pretty well. The flavors are actually quite good too.

It’s been eight years since I’ve used a cartomizer and the flavors back then tried very hard to resemble what they were supposed to be, but they usually tasted a little funny. I wasn’t expecting the flavor of these to be anywhere near as good as they actually are, which is nice. It’s not funky anymore!

Ok, so let’s quickly go over all of the flavors, which there are many. And that’s also really cool. I love having all of these options. 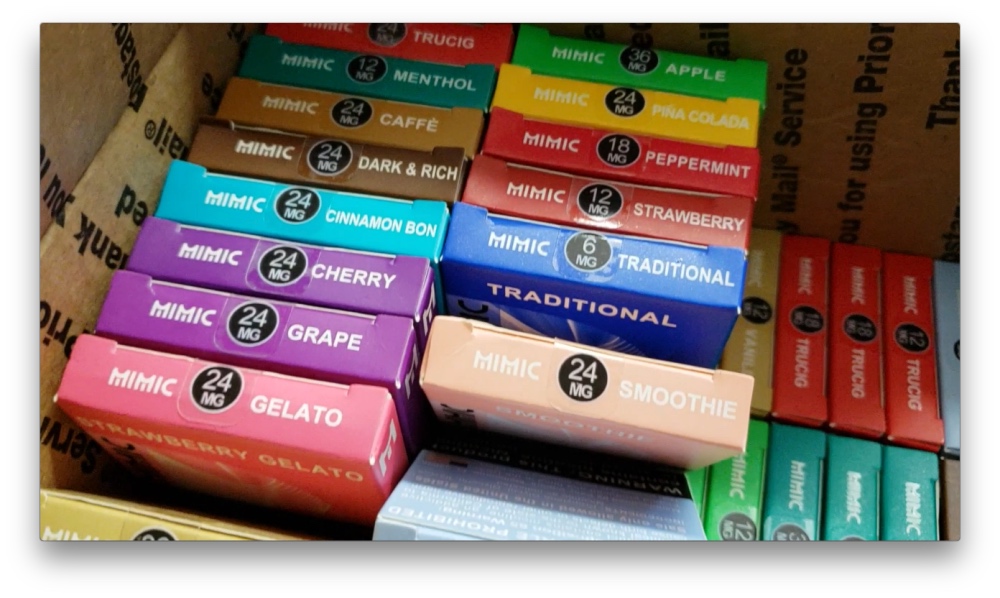 Apple: The apple is pretty good. It’s kind of like an apple and tobacco mix to me. The apple is like a green apple candy flavor.

Black Cherry: This one tastes like cherry coke, but without the bite that coke usually has. It’s pretty good.

Caffe: The coffee flavor is light. This one reminds me of a dark coffee with too much creamer. It’s okay.

Cinnamon Bon: This is a very good cinnamon bun. I can definitely get the cinnamon and frosting flavor.

Concord Grape: This is like a grape soda flavor.

EV4: This is described as a creamy caramel with hints of vanilla. It’s hard to get those flavors without knowing what they are, but it’s definitely a sweet creamy flavor. Knowing the flavor profile helps to understand the notes here.

Dark & Rich: This is more like a cigar. A light cigar, but yeah, a dark tobacco. If you’ve used a Fin cigalike, Mimic says that it’s a lot like that.

Gelato: Gelato is described as a strawberry vanilla gelato topped with whipped cream. This one is very good. It’s just like it sounds. A strawberry dessert. It’s actually very similar to a strawberry milkshake.

Jack Frost: This is basically a menthol tobacco flavor. I don’t get much tobacco, mostly just minty menthol. They describe it as “Extreme”, but it doesn’t seem all that strong to me, at least not until you compare it to their regular menthol flavor.

Menthol: The menthol flavor is a light menthol tobacco that has a slightly earthy taste. It’s hard for me to taste the tobacco flavor but it’s a decent light menthol

Peppermint: The peppermint tastes just like peppermint. It’s not overpowering at all. Reminds me of Christmas and hot chocolate! Nothing much else to say about it.

Traditional: This is supposed to be a light tobacco flavor and it’s extremely light. I can barely taste any flavor at all. But it does seem to have a bit of tobacco. It’s like the super-mild version of the TruCig flavor.

Strawberry: The strawberry is a sort of a cross between a sweet candy-ish strawberry and a fresh one. It seems candy-ish on the inhale and earthy on the exhale. It’s a very light flavor.

Pina Colada: This is a sweet coconut pineapple flavor. It’s good, but I would have liked the flavor to be a little stronger.

Smoothie: This is a banana and strawberry smoothie and it tastes just like one. It’s fruity and sweet.

Trucig: It’s been a long time since I’ve had a cigarette, so it’s hard for me to make a call on this, but this really tastes like a cigarette to me, although with just a little bit of sweetness. The flavor is very light and just like a real smoke, with a little smokiness, but minus the real smoke.

Vanilla: The vanilla is pretty good. It’s like a creamy vanilla custard.

That’s all of the flavors. The only one Mimic didn’t send me was the Harem Turkish tobacco, so that’s the only one I can’t speak to. But overall, I thought the flavors were pretty good. 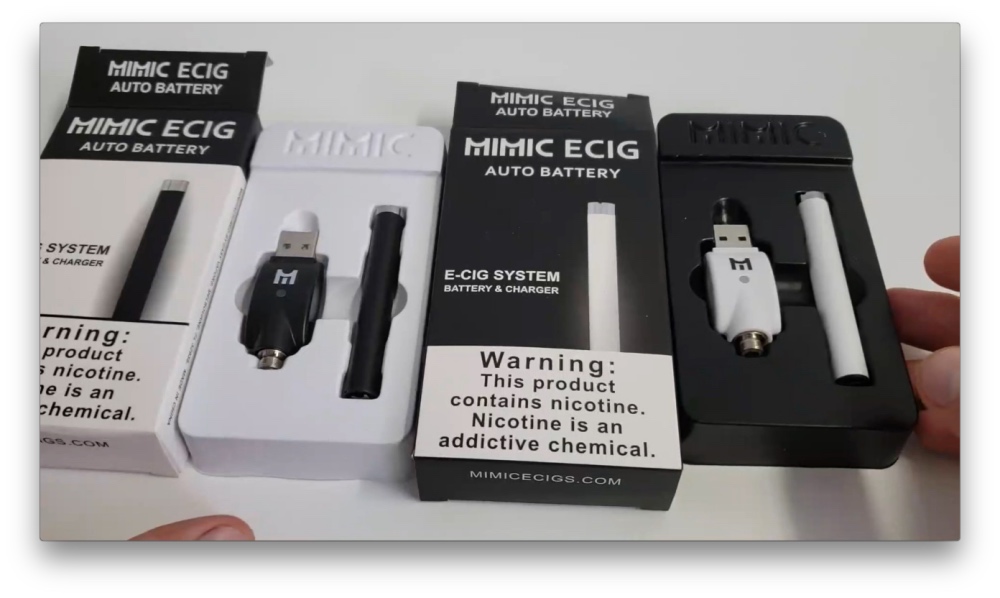 So that’s the Mimic E-cig!

It’s truly an old-school cig-a-like, but with much better performance than the old days. If you go back and look at the very first review I ever did, you’ll see that it’s a review for a cig-a-like from 2010. And you’ll see that cigalikes back then didn’t perform anything like the Mimic. Hardly any vapor at all. Back then that’s all we had, and I actually thought it was pretty good. But comparing the Mimic to what I remember from then, this has a better throat hit, more vapor production, and the cartridges have better flavor. The vape that I had back then also cost me about $130, while this one costs $15, so big difference!

The 36mg cartomizers are a great place to start vaping if you’re a smoker. It’s a strong nic that should help with your cravings. And from there, you can reduce your levels down to as low as zero nicotine over time, just like I did.

The one thing I would’ve like to see is a sample pack of flavors because I know that helped me when I first started. When I first quit smoking, I thought I wanted a tobacco flavored e-juice, but after trying the other flavors, I ended up sticking to vanilla, so that’s what did it for me. I think a sample pack would help a new user figure out what they really want.

Why I Still Vape

So if you’re wondering why I still vape today and you’re worried that you’ll be vaping for the rest of your life, let me explain my story.

But first, even if that did happen, vaping is multitudes safer for you than smoking (95% less harmful in fact), so it’s a great replacement.

I bought a cig-a-like in July 2010 and used it for three months. I slipped up and smoked twice in the first month, but I was determined to quit, so I kept at it. By the end of the third month, I was vaping 0mg nicotine and found that I was no longer craving nicotine anymore, so I stopped.

I quit vaping and smoking entirely.

That lasted until 2015 when I came across some research on using nicotine for cognitive enhancement. I remembered my old vape and wanted to test it. The battery was dead, so I looked online for a new one and I discovered that the vape scene had totally changed. I bought an iStick 20w with a Nautilus Mini tank and I loved it. Not only did I feel the cognitive benefits, but I was drawn into the idea of vaping as a hobby. My passion grew from there and here I am today!

So that’s my vaping story and I’d love to hear your story in the comments.

Where to Get the Mimic

Ok, so anyway, let’s wrap this up.

If you’re interested, you can get the Mimic battery in either white or black from mimicecigs.com for $9.99 or $15.97 for the battery with a 5-pack of cartridges. The 5-packs of cartridges by themselves cost $12.99 each.