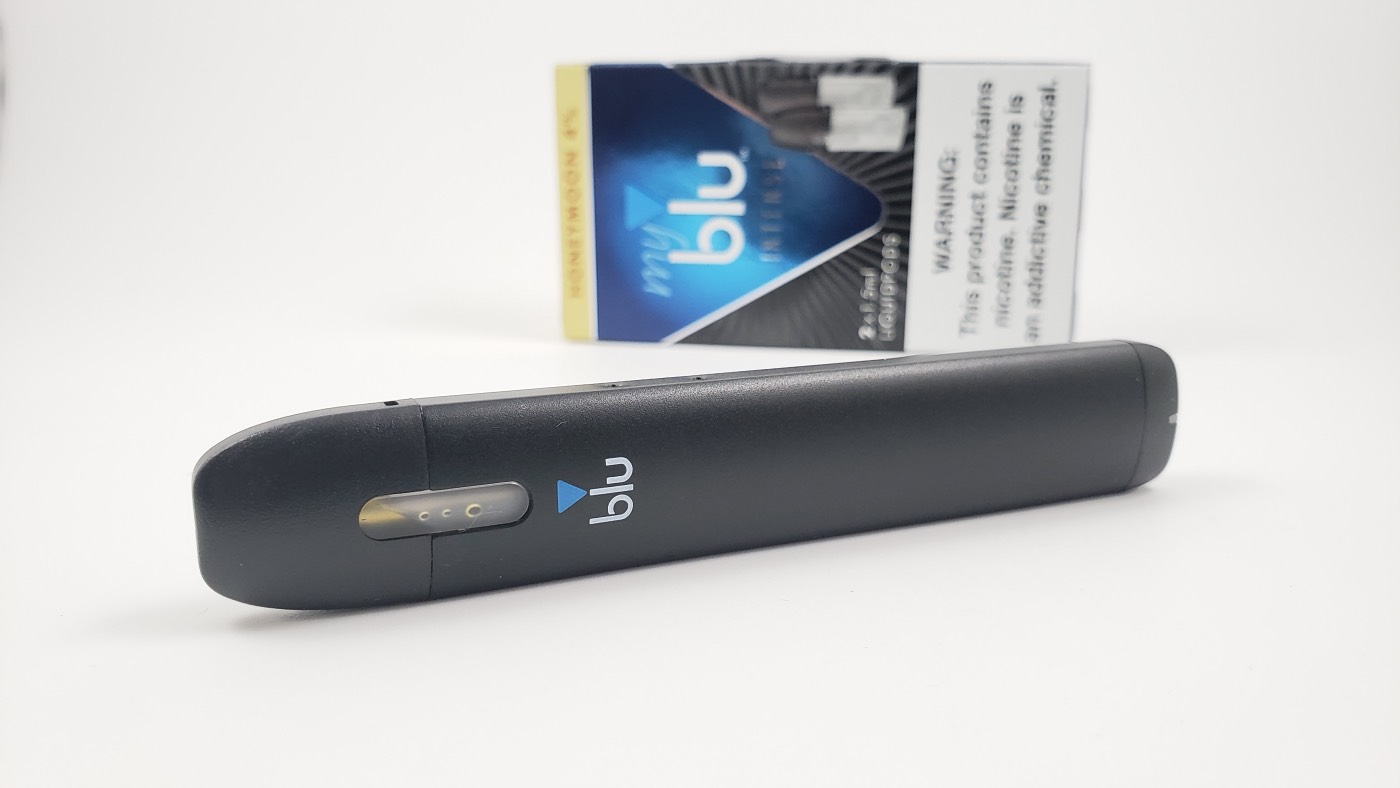 The starter kit comes with the MyBlu device, a mini USB charging cable, and one Gold Leaf 2.4% tobacco flavored pod. So you get everything you need to start vaping out of the kit. You can get that for $22.99 with free shipping. The device is really easy to use. Just plug a pod in and start using it. The pods can go in either direction, so it doesn’t matter how it goes in.

And there’s an LED light that tells you how much charge is left in the device. There’s a slight crackle when taking a hit. As some of you know, there are other devices on the market that work similarly as far as the restricted draw and crackle, and it makes using this device very satisfying. It charges very fast, which is a nice plus, and it also charges using your everyday mini USB. Coming from a big company like Blu, I think it’s really nice that they used a mini USB cable, rather than a proprietary charger. You can also vape on the MyBlu while it’s charging, so that’s another big plus. So on the very first pod that I opened, it malfunctioned. It wouldn’t fire at all. But every other pod I tried after that worked completely fine. Then I got to thinking that maybe the problem was the contacts on the bottom of the pod. So I grabbed my little flathead screwdriver and pulled the contacts out just a little, plugged it into the device and it worked! So if you get a pod that doesn’t work, try that. As for performance, I do get a little bit of spit back from almost every pod I’ve used, some more than others. If you don’t know what spit-back is, that means I’m getting some e-liquid in my mouth with each hit. It doesn’t bother me, but I know it really bothers some people, so I want to point it out.

With the 2.5% pod, I get just a slight throat hit. 25mg is a decently strong level of nicotine, but I think the 2.5% pods will really cater more to people who are looking for satisfying nicotine with a smoother throat hit. Blu has quite a few flavors to pick from. All of their e-liquids are crafted in the United States.

Description: This is described as a rich honey flavor with a light exhale of creamy milk.

I would say that the description is very accurate. It tastes just like a creamy milky honey flavor, but at first, the pod seemed to have had a sort of alcohol taste. That went away after a few hits though.

I’ll be honest, I don’t really like this one. It doesn’t really taste like tobacco to me. Well, sometimes it does and sometimes it doesn’t. But most of the time it tastes like it has some sort of chocolate flavor. It tastes like a really old school chocolate e-liquid, which was okay 10 years ago, but not so great today. But what’s strange is that every once in a while, it does taste sort of like tobacco. But overall, I don’t like this one.

The mint is nice and strong. I liked this one a lot. It’s not a strong peppermint like the peppermint candies, but it has just a slight bit sweet peppermint blended with an almost equal amount of spearmint. These two flavors go together perfectly and the added sweetness makes it really good. This one is a nice sweet melon flavor. The melon is just slightly earthy and tastes natural with that same natural sweetness. There seems to be just a slight little hint of floral here too. This is a pretty good melon e-liquid.

I don’t really taste tobacco much here, but it has a good minty-ness to it. I was worried this was going to taste like Blu’s tobacco flavor, and it sort of does with that little bit of chocolate. And that works really well with the mint. The mint works really well here and it tastes pretty good.

Description: A taste of sweet with a zing of citrus

I’m not sure what type of citrus this is, but it’s definitely a sweet citrusy flavor. It kind of reminds me of orange peel. It’s a natural sweet citrus orange with just a slight bitterness. But I don’t say bitterness in a bad way. It’s pretty good. It’s light and refreshing too.

Description: Fruity and creamy blend to light up your senses

This actually reminds me of Blu’s Citra Zing flavor. It’s like an orange citrusy sweet flavor, but the citrus is a little lighter and there’s more sweetness. And it does have that creaminess they say it has too. It’s nice and mellow. And if this ends up being a device that you really like and use regularly, you get the benefit of Blu’s bluNation point program. With everything you buy, you get points. You can use those points to get discounts on future purchases. 100 points are equal to $1 from what I understand.

To start out, you get 75 points for signing up to the program. You can get an extra 205 points by connecting your social media accounts, so you’ll get a total of 280 points right off the bat. The MyBlu device is worth 115 points. And when you buy a pack of two pods, you get 50 points.

Another benefit of the program is that if you refer a friend who buys a MyBlu device, you get 1,000 points, which equals $10 worth of points. The person you refer also gets a discount on the kit. They’ll get a kit and a package of pods for $9.99. It’s a pretty sweet deal The overall performance of the MyBlu is very satisfying. The draw is restricted and in my opinion, perfect. It hits perfectly every time. I get a nice amount of vapor on each hit. And the throat hit of the pods is pretty good too. There’s not enough throat hit on the lower Nic levels for me, but I really like the higher nic pods.

The main drawback for this whole kit is that I get e-liquid in my mouth with almost every hit. Personally, that doesn’t bother me, but I know that it really bothers some people so it needs to be mentioned.

Blu offers a one-year warranty on the pods against manufacturing defect, so you can return a broken pod if it doesn’t work. The MyBlue device has a limited lifetime warranty, but you need to register your device to get its myCARE warranty. But that’s something you just don’t see with most vape devices, so it’s a nice plus.

Ok, that’s it for the MyBlu. I think it’s a really nice pod kit. If you want to get a deal on one, use my referral link.