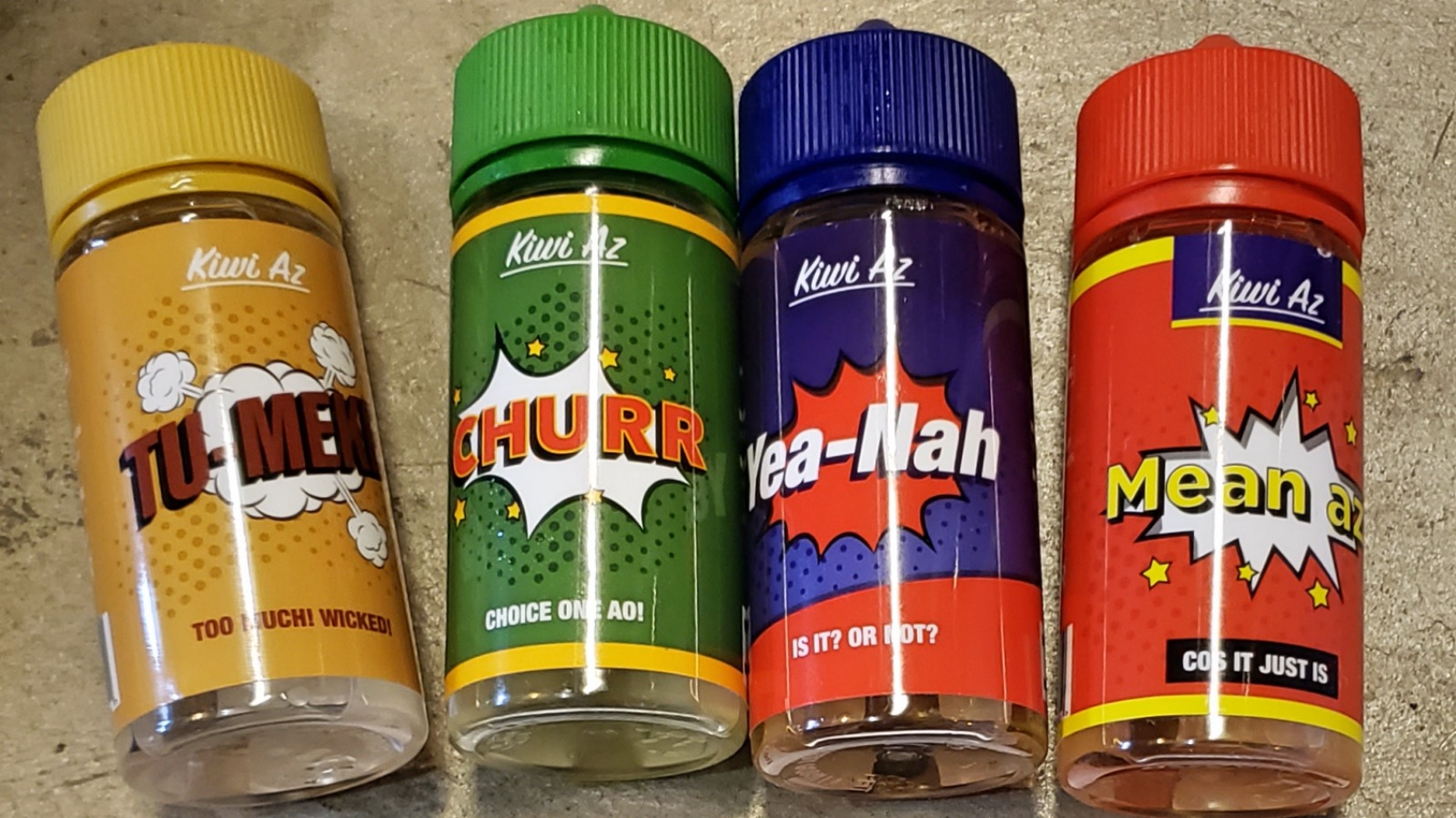 I received this e-liquid from a popular vape company based in New Zealand called NZ Vapor. This particular line is called Kiwi Az, but they have several other premium lines too.

This line costs $45NZD, or about $27 USD per 100ml bottle. These are 70VG/30PG liquids and are made with nicotine salts. They come in 3mg and 6mg nicotine strengths.

Ok, so as we get into each flavor, I’m going to point out all of the cool New Zealand slang they use on the flavor names and bottles. I had to look a lot of this stuff up and I think I understand it. If you’re from NZ and I’ve got something wrong, please correct me. CHURR is the flavor of baked apple pie. Get it here.

Chur is slang for something like “right on!” or “awesome!” In a case where you’re surprised in a good way. So if your friend comes over and says “hey, I picked up an extra bottle of e-liquid for you” and you would “chur, thanks man!”

On the front of the bottle, they also say “Choice one AO.” I’m not sure I have this one right, but from what I can find, this is phrase used by a New Zealand gang which stands for “All Out”. I think that translates to simply going all out in whatever you’re doing, sort of like all or nothing.

I really like this one. It tastes like apple pie right off the bat, but it has a really unique candy apple taste rather than a regular natural apple. I actually like that a lot. It gives this a more interesting sweet apple pie flavor that’s really good. MEAN Az is the flavor of vanilla. Get it here.

I think Az is used sort of like “no worries” or “it’s all good”. For example, you might say “hey thanks for letting me borrow your vape, I’ll get it back to you tomorrow” and they would say “it’s sweet az, use it as long as you need”.

But this liquid is called Mean Az. In New Zealand, mean is used as slang for something like awesome or bad-ass. I think this is actually a word still used in the U.S., or at least it was when I was younger. So you might say “I just found a $20 bill on street, that’s mean!” or “damn, that murdered out BMW 8 Series is mean!”

Right off the bat this one has a really good creaminess. I like it. It’s really smooth and tasty. The vanilla is really good, not too strong and not too light, and it’s a little sweet. This is a great vanilla flavor.

YEAH-NAH is the flavor of peach and cream. Get it here.

This is slang in NZ when you disagree with someone. I think I’m actually familiar with how this would be used, because we use it here too, or at least we do in Colorado. So somebody says something you disagree with and you say “yeahhh, no” or “nah” in NZ.

This is another very unique flavor. It tastes like peach, but also reminds me of something tropical like mango or lychee. I mean just a slight hint though. To me it’s kind of like a tropical peach with some slight creaminess. It’s a very good unique flavor. TU-MEKE is the flavor of raspberry and lychee. Get it here.

Tu Meke means something like “too much” such as when someone goes above and beyond to do you a favor. For example, lets say you bought an RDA from a friend and when they give it to you, they throw in a box of pre-made coils. You would say “Tu Muke, Nick!”

It’s really good and sweet, but it’s a little hard for me to get the berries. The lychee is definitely there. It’s not strong or overly sweetened, but it’s good and has that slight hint of berries to give it a nice touch.

This has been a great line of liquids, all of them with their own unique tweaks on traditional liquids that I haven’t seen in other brands. These are more mellow flavors that purposely don’t have a ton of sweetener, which I think really makes me appreciate the recipes that went into these liquids. I like all of them.

This line was sent to me for review from NZ Vapor and you can get 100ml bottles for $45NZD or about $27 USD.