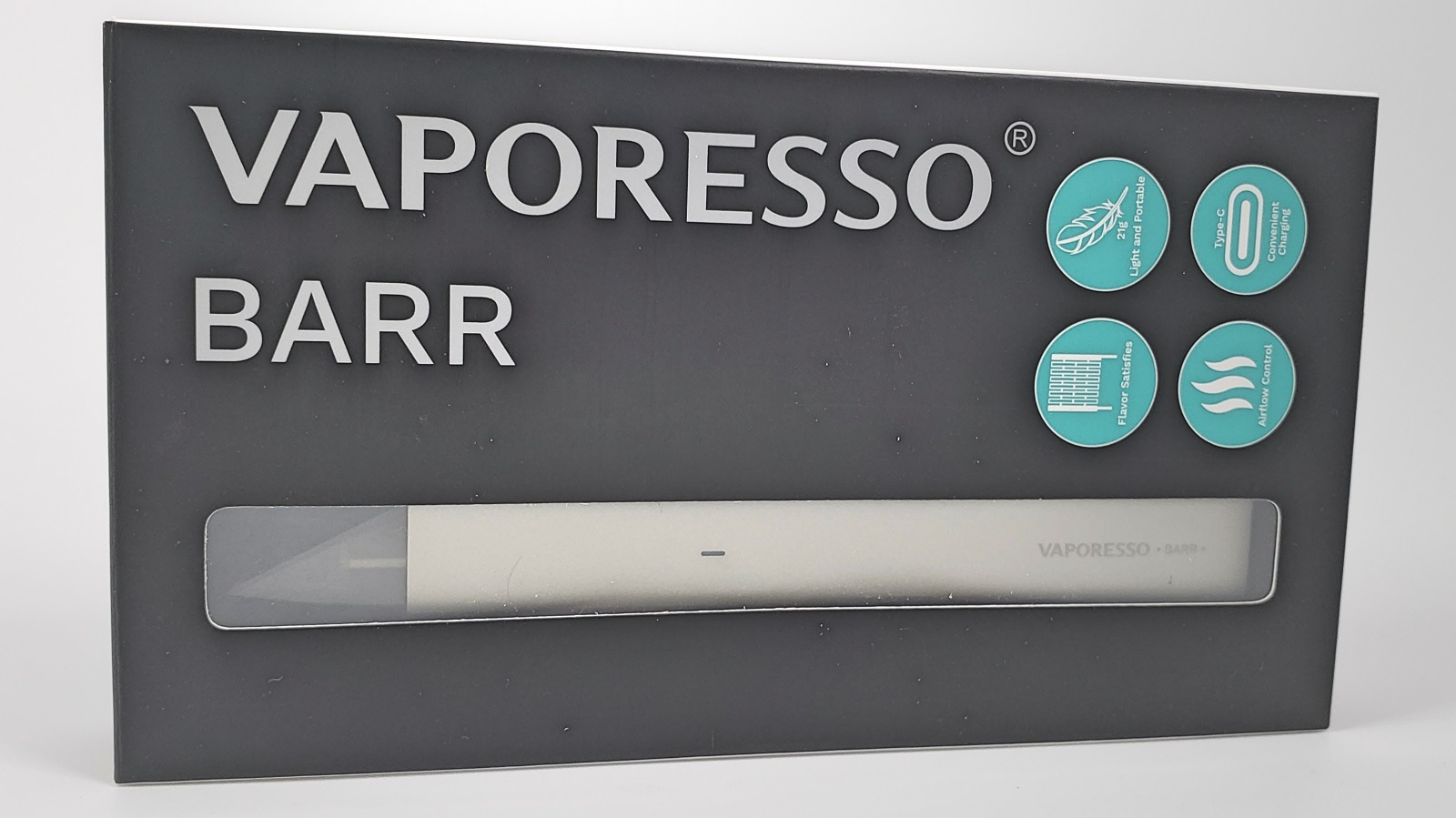 The Vaporesso Barr was sent to me for review from Vaporesso. This is Vaporesso’s new entry-level stick-style pod device, but with some nice features like adjustable airflow and mesh coils. The bar has a stick-style to it, but it’s a little thicker than most devices. It’s actually a square shape, which is made that way to make its adjustable airflow work. And they’ve twisted the mouthpiece so it’s offset from the device. It’s a cool looking design feature. The Barr has a metal texture coating on it to give it a nice smooth look. There’s a USB-C port on the bottom, a tiny LED light on one side, and the airflow intake on the other side.

The output is a constant 13 watts. On the 1.2 Ohm pod, this works well, although I would have like for there to be a little more power to compensate for the loose airflow. The pod holds 1.2ml of liquid, which is a bit on the low side. You’ll probably have to fill this up often if you vape a lot. The pods have coils built-in, so you can’t replace the coils here. When you need a new coil, you replace the entire pod. To fill it up, just pull this silicone plug on the side.

There’s only one resistance available, which is built at 1.2 Ohm. So this device is meant strictly for high-nicotine, tight draw, vaping. There are four options for adjustable airflow and Vaporesso came up with a really unique way of doing it. Basically, the airflow changes depending on the direction of the pod. For every turn of the pod, the airflow will change. There are little airflow symbols on the pod that tell you which setting you’re on. They’re really hard to see so you need to look very close, but they’re on there.

The side with #1 marking on it is the most closed-off airflow. Between one and four, there’s not much difference in airflow. There’s a little difference, but it’s hardly noticeable, at least not to me. At the most restricted adjustment, it’s a loose mouth-to-lung. And at the loosest, it’s just slightly more open, but still not loose enough to take a lung hit, so this only an MTL vape. I actually like my airflow tighter than this, so I’ve been covering the airflow holes with my finger to restrict it even more, which isn’t comfortable because of the way I have to turn the pod to get a hit while covering it. I would have liked the airflow to be a lot tighter. The battery in the Barr is a 350mAh battery and it charges using a USB-C cable, so it’s a pretty small battery, but it’ll charge fast. It’s a simple device that works okay. The device is a little big for only having a 350mAh battery and no special features in the chip, but the unique airflow is a neat idea. I would have liked for the airflow options to be more noticeable and I would have also liked to the smallest airflow hole to be a lot more restricted. It’s not a flavor-chaser by any means, but the pods have a decent amount of flavor. Overall, I’d say it’s a good beginner setup for people who like loose Mouth to Lung vaping, especially since it’s only ~$20.

The Vaporesso Barr was sent to me for review from Vaporesso and you can get it from them for $19.90