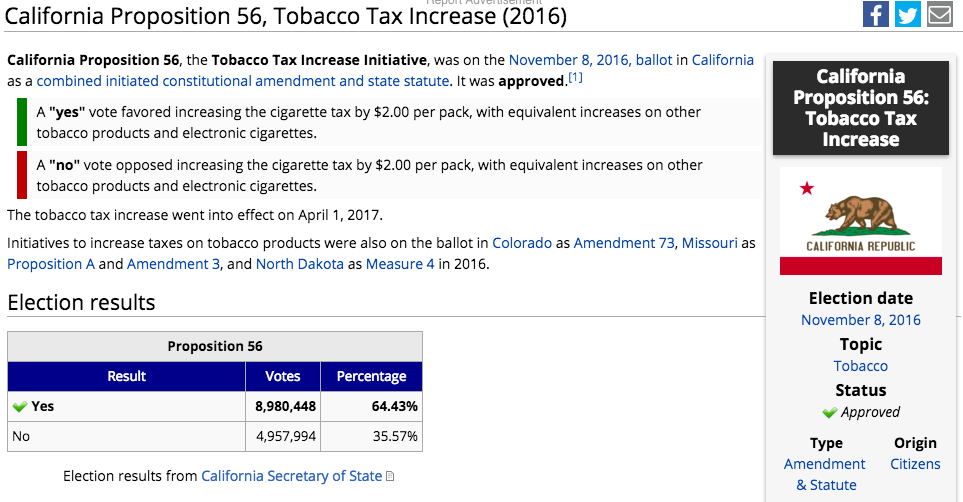 If you’re a vaper in California, you’ll notice that prices in your local vape shops have gone up as of April 1st.

You might recall that Prop 56 passed in California during the elections last November. This proposition is also known as the Tobacco Tax Increase Initiative. It passed with an overwhelming 64.43% of voters in favor of the tax increase.

This new tax increase raises the taxes on cigarettes to $2.00 per pack, with equivalent increases on other tobacco products and electronic cigarettes.

According to HaloCigs.com, this new tax will increase the cost of vaping products by up to 67%, resulting in a $20 bottle of e-juice costing $30 to $35. I believe this 67% number that Halo is reporting is what the rumor was when the bill originally passed. It’s not accurate anymore as far as I can tell, although I don’t know if it’s still possible for the taxes to reach that point, which might be why they’re still reporting it.

According to Tasty Vapor, a California-based e-liquid manufacturer, all liquids containing nicotine will have a 27.3% excise tax for California residents, but this excludes 0mg nicotine e-liquids. Orders from California businesses that go out-of-state are also not affected.

The California State Board of Equalization’s special notice states that vaping products are exempt from the tax as long as they are sold independently of liquids containing nicotine.

Retailers and wholesalers must also pay a “floor stock tax,” meaning additional tax on anything in their possession and inventory.

Due to pressure on increasing the taxes even further, it’s expected that the excise tax will increase more on July 1st. The final percentage hasn’t been figured out yet, and this might be where Halo’s 67% number comes from.

This is an excise tax, which means that the consumer is not responsible for it – the vendor is. The first business to sell the product within the state of California is responsible for the taxes.

For example, if a vape shop in California gets e-juice from a manufacturer located in Florida, the California shop is responsible for paying the taxes to the state. This is going to result in higher costs for the vape shop, which will be passed on to the consumer.

And like the ridiculous Pennsylvania vape tax, if you order vape products from out of state, you are responsible for paying those taxes. There’s no circumventing these taxes if you are a California resident.

It’s estimated that this new tax will result in more than 1,000 vape shops closing within the state, as fewer customers will be able to afford these tax increases. Some manufacturers are likely to move out of the state as well.

It looks like DIY might be the best option for California residents at this point. Zero-nicotine e-juice is exempt from these taxes, which mean you can still buy affordable e-juice, but you’ll have to add your own nicotine. Liquid nicotine is included in this new tax law, so you will need to pay higher taxes on it, but it’s still cheaper to pay the tax on a bottle of nicotine occasionally, rather than on every bottle of e-liquid you buy.