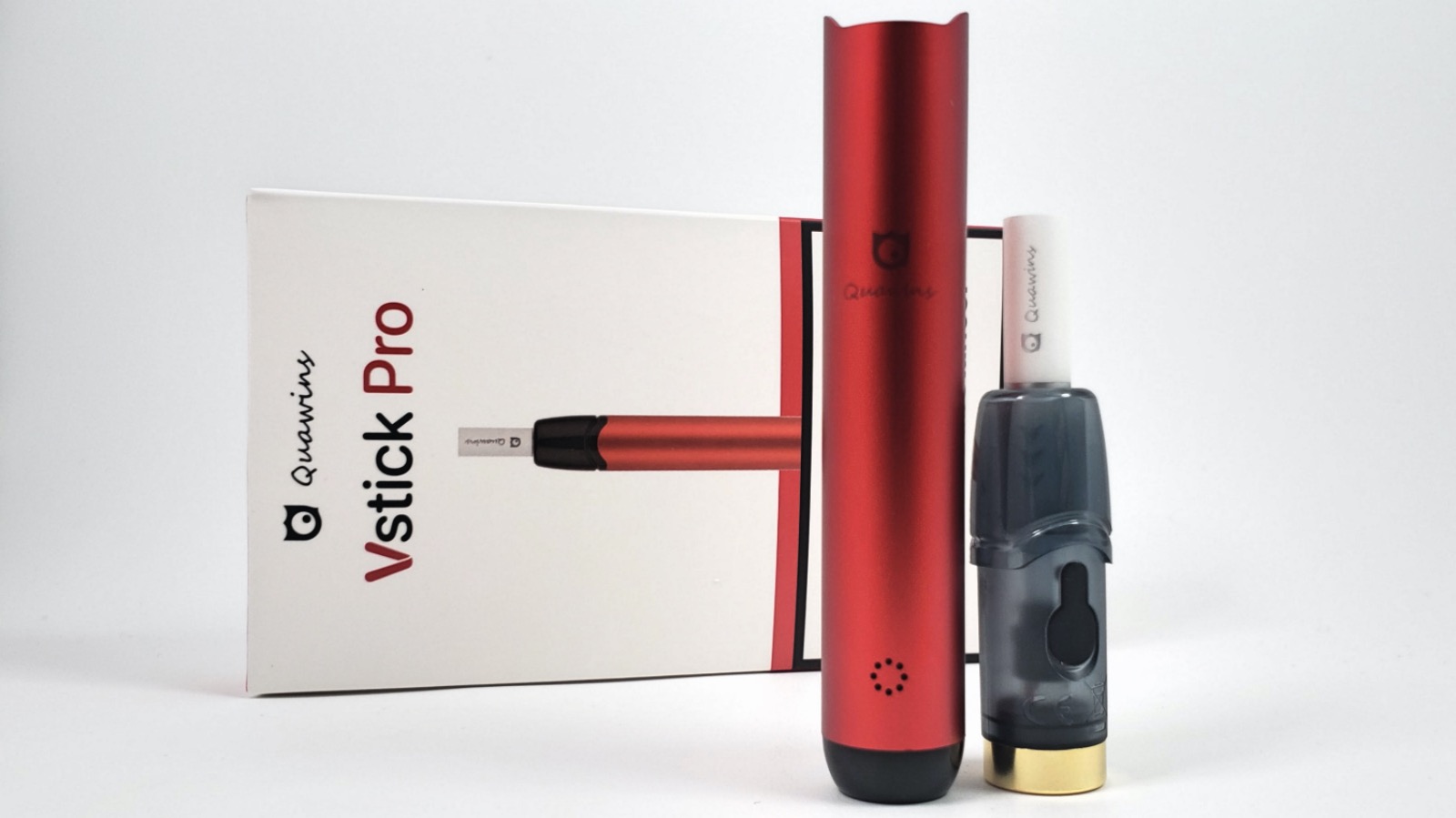 The Vstick Pro was sent to me for review from HeavenGifts.com. Get it here (affiliate). This is a very interesting device. It’s almost like a cross between a regular pod vape and a heat-not-burn device. Heat-not-burn products like the IQOS are still not readily available in the U.S., although the FDA has given Phillip Morris approval to sell them. You can get them in a couple of test states right now, but if you live outside of those states, you can’t buy them. I think that might be one of the reasons why Quawins designed this device. It’s almost like combining an IQOS with a refillable pod device and getting around the restrictions of trying to buy heat sticks.

I’ve never tried an IQOS so I can’t tell you how well this compares, but based on what I’ve heard of the IQOS, I would say that this is probably not very similar at all. This is basically a pod device with a cigarette filter as a mouthpiece. That doesn’t mean it’s not good though. I think it’s a very smart idea and one that might really help cigarette smokers transition to vaping. The box comes with two filters inside, both of which are the same. These are basically like cigarette butts, but with a hole down the middle. It looks like the same material and everything.

I don’t think they do anything at all to change the performance or flavor of the vape, but I think these could be great for cigarette smokers just transition to vaping because it adds that extra bit of similarity to what they’re used to. The filter looks like the end of a cigarette, it’s the same size as a cigarette, and it feels like a cigarette butt. Psychologically, this could really help smokers transition.

And if you don’t want to use it, you can take it out and the device works just like any other pod system.

The filters are really affordable too. You can get a pack of 20 filters for $3.49.

The pod is a refillable 2ml pod. It’s held into place on the device with strong magnets and doesn’t move around at all. When you drop the pod into the VStick, the device vibrates to let you know that it made a solid connection. To fill the pod, there’s a little plug on the side of the tank. Pull it out and fill it up and that’s it. The mouthpiece is round because it needs to hold the round filter, so that makes sense, but one thing I think would have made this better would have been if they flatted out two sides of the mouthpiece to make it more like a duckbill mouthpiece. That way if someone wants to use it without a filter, it would feel more comfortable and less bulky.

Quawins claims the pod is 99.9% leak-free and I believe them. I don’t get any leaks whatsoever from the bottom of the pod. And I’ve had this thing rolling all around my backpack for about two months now. No leaks. But I do want to add that mouthpiece gets some buildup in there. I don’t know if it’s enough to leak, but the bottom of the filter is a little soaked, so if you use it without the filter, you might get a little leaking from the top. The Vstick Pro has a 400mAh battery, which is decent. It should get you through the day without needing to be charged, but that depends on how heavy you vape. It charges using a USB-C cable, which is great to see. And you can vape it while it’s charging. This is draw activated, so all you need to do to use it is to take a drag. The vibration feature that I mentioned earlier also goes off every 20 puffs. My guess is this is a good round number to use to tell the user that they’ve vaped about as much as a typical cigarette. It’s actually closer to double the puffs that smokers usually take, so I think they could have dropped it to around 15.

You only have one option for airflow, but it’s good. It’s a tight MTL vape, which I think is really satisfying. The flavor from the pods is good too. Overall, the Vstick Pro is a nice restricted draw device. It works well, it’s super easy to use, and the flavor from the pod is good. And even though this is just a pod device with a filter on top, I think it’s a really clever idea. It’s pretty common to suggest tight draw, high-nicotine vaping devices to beginners because it gives them the closest experience to smoking, which is what they want. So adding that filter just makes that experience even closer to the real thing.

So who is this for? I think any vaper would enjoy using this because it just works well, but to be honest. it’s really not that different than any other pod device on the market. So I think this would be especially useful for smokers. So if you know a smoker who wants to transition to vaping, this could be a really good option.

This was sent to me for review from HeavenGifts.com and you can Get it from them (affiliate) for $24.99